Today, I have Carolyn Hughes visiting me. We met recently at the Historical Novel Society’s conference in Durham – an ideal setting for two peeps who share a love of everything medieval. In her recent release, Carolyn’s protagonist is in training to become a knight and is now a squire. I found that interesting as in my WIP I have a young Lionel serving as page to King Edward I, hoping of course to one day become a squire. So I asked Carolyn if she’d share something about the life of a squire – and she did. Enjoy!

In Squire’s Hazard, the eponymous squire is Dickon de Bohun. Readers of the first Meonbridge Chronicle, Fortune’s Wheel, will recall that Dickon appeared in that novel as a baby, the illegitimate child of the (now dead) son of the lord of Meonbridge, Sir Richard de Bohun, and a village peasant girl. Dickon is brought up by his mother and her husband, a carpenter. Yet Dickon is the de Bohuns’ only grandchild and, despite the “irregularity” of his birth, Sir Richard names the boy as his legitimate heir. At seven years of age, little Dickon, having mostly known life only as a carpenter’s son, is sent off to the castle of another knight to be a page, and subsequently a squire, in expectation of following his father and grandfather into knighthood.

What Dickon learns, as a page and then a squire, is important to the storyline of Squire’s Hazard.

A page was a servant to his knight or lord, but he also began to learn the fundamentals of knightly life: riding, fighting (at this stage, with wooden shields and mock weapons), chivalry, courtly manners, literacy, service – lessons that would continue throughout what was a long (maybe fourteen years) apprenticeship to knighthood.

Around the age of twelve to fourteen, the page would be promoted to squire. A squire was still a servant to a knight, his tasks more onerous, involving care of the knight’s horses and of his weapons and armour, and attending him at tournaments and into battle. (Though, for Dickon, King Edward III’s conflict with France was on hold during these years, so war was not required of him.) 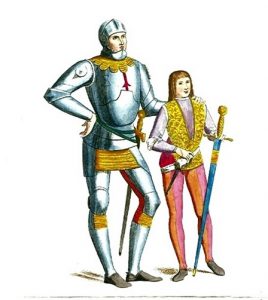 The squire also had more seemingly menial tasks, like running errands and waiting at table. Yet, serving your knight was not considered “servile”, but a privilege. Dickon’s grandmother tells him:

“It is important that you learn all aspects of etiquette and courtesy, even if they are not the most exciting parts of your training. Moreover, it is an honour to serve your lord at table. If you are invited to be cup bearer to the earl, you will know that he favours you most highly.” 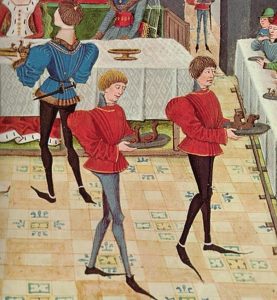 A squire received instruction in all aspects of his role, but preparation for his future life as a knight, as a warrior in battle, was the main focus of his training. Now he was older, the training was stepped up, with real weapons. The emphasis was on developing strength and skill, especially in horsemanship and weapons handling.

I imagine practice sessions were daily, or frequent at least, and I envisage them being gruelling.

‘We’re building up your muscles here,’ the master yelled from the edge of the training ground, ‘as well as teaching you control of yourself and of your steed. This is what all those years of riding practice were for.’ He thwacked his whip against the ground, as Dickon sped past on a rouncey. ‘Remember what you’ve been told: you’ll never be able to fight on horseback unless you and the beast move as one.’

But I suppose too that the physical training, and especially learning how to handle weapons, was exhilarating for a boy anticipating a life of adventure and excitement.

In January, those squires who were at least fourteen had begun training with real weapons: steel swords; heavy lances twice their own height; and unwieldy maces and pollaxes.

Dickon had been excited by the prospect of handling a proper sword, if nervous of his ability to do so. Until now, weapons training had been more like play. They used to fight on piggyback, and learning to thrust and parry whilst balancing upon a fellow’s back was good practice for fighting atop a horse. But the swords and shields they used then were hardly any better than those given as toys to children.

Even now, the swords weren’t really dangerous, with their blunted edges and shielded tips. The important difference was the weight: the steel sword was so heavy his arms ached mightily at the end of every training day. But it was good to feel he was on the way at last to becoming a true knight, a noble fighter, as his father and grandfather had been. Chapter 8

Learning to handle a sword was dangerous enough, but lance training (in my eyes) seems even more alarming. Of course, galloping towards a fellow knight with a huge lance under your arm, ready to thrust it forward, to unseat your opponent, is the typical image of a jousting knight. But what a fiendishly difficult manoeuvre it must have been to acquire! The training that pages and squires undertook to do so is mentioned more than once in Squire’s Hazard:

How he’d enjoyed the lance training when he was a page. For him and Sir Giles’s other page, it was like a game. They took it in turns to climb onto a wheeled wooden horse, a little wooden lance clutched beneath one arm. Then one of Sir Giles’s squires would loop the harness around his shoulders and run towards the quintain, pulling the “horse” behind him, whilst the page aimed at the target with his lance. It had been fun, and how they laughed when they failed often even to touch the mark.

Now, though, it was a game no longer: it was much harder, and it was dangerous.

Despite his late start at riding, Dickon had taken to it and, these days, he felt as comfortable sitting upon a horse as any of the others. Which was just as well, because lance training now had to be done from astride a saddle.

The quintain still comprised a pole and crossbar, with the target at one end and a heavy sandbag hung from the other, so it was harder to make the crossbar move and spin. But, now they were on horseback, the skill to be perfected was not so much about wielding the lance as controlling your horse as it charged towards the target. Yet, now that the lances were longer and heavier, balancing such an unwieldy thing beneath one arm, whilst trying to govern your galloping mount with the other, was exhausting.

If riding and weapons skills were the most important aspects of a squire’s training, they weren’t all. And not all training involved intense physical activity. Courtly skills were essential: music, dancing, and social manners. And literacy was important too. Earl Raoul, discovering that Dickon’s reading skills are poor, tells him:

‘Learning to ride and handle weapons are of course essential for a knight. But reading and writing are useful too, particularly when you have estates to manage, as you will have when, at length, you return to Meonbridge to take up your responsibilities.’

Squires had to study the code of chivalry, which taught them the knightly qualities of honour, courtesy, courage, and respect for women. It is these aspects of knighthood that, in Squire’s Hazard, Dickon particularly embraces, in his attitude towards the hostile Edwin, and towards Libby, the girl he loves but cannot marry. For Dickon, it is important that his reputation is as a man of honour. (Anna’s comment: Aww, sweet little lamb, what is he, all of fourteen? They grew up quickly back then!)

How do you overcome the loathing, lust and bitterness threatening you and your family’s honour?

It’s 1363, and in Steyning Castle, Sussex, Dickon de Bohun is enjoying life as a squire in the household of Earl Raoul de Fougère. Or he would be, if it weren’t for Edwin de Courtenay, who’s making his life a misery with his bullying, threatening to expose the truth about Dickon’s birth.

At home in Meonbridge for Christmas, Dickon notices how grown-up his childhood playmate, Libby Fletcher, has become since he last saw her and feels the stirrings of desire. Libby, seeing how different he is too, falls instantly in love. But as a servant to Dickon’s grandmother, Lady Margaret de Bohun, she could surely never be his wife.

Margery Tyler, Libby’s aunt, meeting her niece by chance, learns of her passion for young Dickon. Their conversation rekindles Margery’s long-held rancour against the de Bohuns, whom she blames for all the ills that befell her family, including her own servitude. For years she’s hidden her hunger for revenge, but she can no longer keep her hostility in check.

As the future Lord of Meonbridge, Dickon knows he must rise above de Courtenay’s loathing and intimidation, and get the better of him. And, surely, he must master his lust for Libby, so his own mother’s shocking history is not repeated? Of Margery’s bitterness, however, he has yet to learn…

Beset by the hazards triggered by such powerful and dangerous emotions, can Dickon summon up the courage and resolve to overcome them? 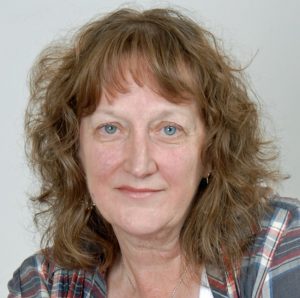 CAROLYN HUGHES has lived most of her life in Hampshire. With a first degree in Classics and English, she started working life as a computer programmer, then a very new profession. But it was technical authoring that later proved her vocation, as she wrote and edited material, some fascinating, some dull, for an array of different clients, including banks, an international hotel group and medical instruments manufacturers.

Having written creatively for most of her adult life, it was not until her children flew the nest several years ago that writing historical fiction took centre stage, alongside gaining a Master’s degree in Creative Writing from Portsmouth University and a PhD from the University of Southampton. 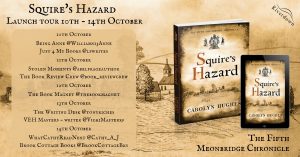