Today, I have Elizabeth St.John visiting and I am absolutely thrilled, because Elizabeth is here to talk about her new release, The Godmother’s Secret  (and what a fantastic read this is, but more of that later)
So, hi Elizabeth, and welcome back!
Elizabeth: Hi Anna, thanks so much for inviting me on your blog. It’s a pleasure to be back in your company. We’ve explored a few historical sites and events together over the years, and I have a whole new admiration for your encyclopedic knowledge on the Middle Ages after tackling the research for my new book!
(Anna: Sheesh! Encyclopedic knowledge. . . I am flattered. Back to you, Elizabeth)

Even though I’d grown up hearing all about my illustrious great-aunt (19x) Margaret Beaufort, our family perspective was quite a bit different than that of her biographers – and definitely poles apart from her depiction in popular historical fiction. Her relationship with her St.John brothers and sisters resulted in a shower of titles, land and perquisites for the family, and the halo effect of her Tudor legacy raised our family to prominence in Tudor society, a position which lasted for centuries.

I turned to my family tree when I was first looking for a short story for the Betrayal anthology that you and I contributed to: at a loss one afternoon I typed my own name into the data base, and up popped a handful of Elizabeth St.Johns. Gliding past the Victorian and Georgians, I almost went with a Tudor Lady Elizabeth, until my eye was caught by a date in the late 1400s. An Elizabeth St.John who lived at the end of the Wars of the Roses, was married to one of Richard III’s powerful northern Lords, Baron John Scrope, and – wait for it – was the godmother to Edward V, the eldest “Prince in the Tower.” Suspecting even more hidden jewels, I quickly traced her siblings and confirmed that she was also half sister to Margaret Beaufort, the mother of Henry VII, and matriarch of the Tudor dynasty.

I had my story. After we published Betrayal, Elysabeth Scrope wouldn’t leave me alone. I had finished the short story with her delivering her godson into the Tower of London to prepare for his coronation. We know what historical accounts tell us happened next. But what really took place? And why shouldn’t Elysabeth, of anyone in the world, know the fate of her precious godson and his younger brother?

The disappearance of “The Princes in the Tower” is no doubt one of England’s biggest historical mysteries. There is no proof they were murdered. No bones were found (those that are purported to be theirs which are now interred in Westminster Abbey have never been scientifically tested). Richard III, Margaret Beaufort and Henry, Duke of Buckingham have all been accused over the years of being responsible for their deaths. Ask anyone (actually I asked everyone!) what they believed happened to the princes, and you’ll get an entire spectrum of very strong opinions. But, in the end, no one knows.

I hope you enjoy my story of the missing princes. Or rather, Elysabeth St.John’s. It is her secret to share. 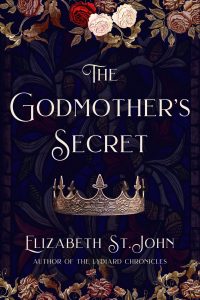 If you knew the fate of the Princes in the Tower, would you tell? Or forever keep the secret?

May 1483: The Tower of London. When King Edward IV dies and Lady Elysabeth Scrope delivers her young godson, Edward V, into the Tower of London to prepare for his coronation, she is engulfed in political turmoil. Within months, the prince and his brother have disappeared, Richard III is declared king, and Elysabeth’s sister Margaret Beaufort conspires with her son Henry Tudor to invade England and claim the throne.

Desperate to protect her godson, Elysabeth battles the intrigue, betrayal, and power of the last medieval court, defying her Yorkist husband and her Lancastrian sister under her godmother’s sacred oath to keep Prince Edward safe. Bound by blood and rent by honour, Elysabeth is torn between King Richard and Margaret Beaufort, knowing that if her loyalty is questioned, she is in peril of losing everything—including her life.

Were the princes murdered by their uncle, Richard III? Did Margaret Beaufort mastermind their disappearance to usher in the Tudor dynasty? Or did the young boys vanish for their own safety? Of anyone at the royal court, Elysabeth has the most to lose–and the most to gain–by keeping secret the fate of the Princes in the Tower.

Inspired by England’s most enduring historical mystery, Elizabeth St.John blends her family history with known facts and centuries of speculation to create an intriguing story about what happened to the Princes in the Tower.

Say England in the fifteenth century and most historically minded people will say “Aha! The War of the Roses and the Princes in the Tower.”

And yes, this novel set in late fifteenth century England is precisely about those two princes—and about the woman who has sworn a holy oath to protect the eldest of them, come what may.

To write a book about events so many people have heard about can be a challenge. If nothing else, the narrative is well-known and, to some extent, overrepresented in historical fiction. Such concerns fade away almost immediately when reading Ms St.John’s beautifully written novel, featuring her own ancestress and namesake, Elysabeth St.John, Lady Scrope.

Ms St.John paints with words, and from the pages rise images of medieval London, complete with smoky haze, loud and dangerous crowds and dark alleys. The Thames ebbs and flows, and over it all looms the Tower, so central to this story. Whether it be the countryside round Elysabeth’s beloved Bolton Castle, or the oppressive grandeur of the Jerusalem chamber to which Elizabeth Woodville, queen of England, has fled claiming sanctuary, the descriptions has this reader seeing it all through Elysabeth’s eyes.

Add to this a pacy, twitching prose and I find myself sitting on tenterhooks, hoping against hope that maybe—maybe!—Elysabeth’s prayers will help and the historical facts will rearrange themselves into something resembling a Happily Ever After for all those involved. Not so: Ms St.John is a stickler for historical facts, but she is also most adept at spinning stories to fill in the gaps that history has so conveniently left us.

In The Godmother’s Secret, I yet again meet characters such as Richard III, his boon companions and the two endearing princes. And then, of course there is Elysabeth, so determined to safeguard dear Ned (Prince Edward), so frustrated by the restrictions put on her by her gender, so afraid of what the future will bring and what it may all cost her and her extended family. Mind you, Elysabeth’s family is huge. She’s related to almost all the principal players bar the royals and while there are some cousins she cannot stand—like Henry Stafford, Duke of Buckingham—she is driven by a strong sense of loyalty towards her family, even those that perhaps do not deserve it, like her half-sister, Margaret Beaufort.

Ms St.John’s Margaret Beaufort is ruthless and manipulative—and deeply unlikeable due to those traits. But she is also kind-hearted and caring, and one cannot help but feel some compassion for this brilliantly intelligent woman who has only one son, a son she is convinced will one day become king. As a supporting mother, she does everything she can to help him on his way—which is a lot. As a protective mother, she takes whatever measures she considers necessary to safeguard her son’s future destiny—no matter who gets crushed along the way.

The Godmother’s Secret is a gem, one of those books that somehow manages to tell the same old story but spin it in such a way that it all seems new again. It takes quite some skill as a writer to achieve that. Brava, Ms St.John, Brava! 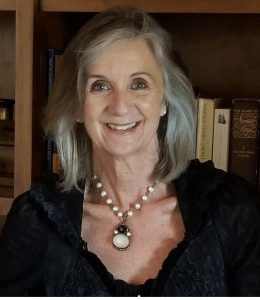 Author Bio: Elizabeth St.John’s critically acclaimed novels tell the true stories of her ancestors: extraordinary women whose kinship and friendship with historical figures such as Margaret Beaufort, Henry VII, and the Stuart kings and queens bring a unique perspective to Medieval, Tudor and Stuart England.

Inspired by family archives and residences from Lydiard Park to the Tower of London, Elizabeth spends much of her time exploring ancestral portraits, diaries, and lost gardens. And encountering the occasional ghost. But that’s another story.

2 thoughts on “Taking your vows seriously – or why the Godmother ended up having a secret.”