Writing novels set in the distant past has its disadvantages. Like when your heroine ends up in a situation where you just know she’s dying for a piece of chocolate – except that chocolate hasn’t been invented yet. Or when the scene you’ve just written calls for cold fingers clasped around the comforting warmth of a mug filled with freshly brewed coffee. Come again? In the first half of the seventeenth century? I don’t think so.

As an avid reader of historical fiction, I know just how much I hate it when I run into anachronisms. In a matter of microseconds the magic is gone and I might just as well throw the book aside, because I’ll never get over the fact that the eleventh century Saxon lady just said that she’d walked “six kilometres” to get to wherever she was. Or when people “re-book their flights” over the Atlantic in the early 1920’s… I can make this list pretty long: amorous men unzipping the gown of their 18th century bride, a disobedient princess set to pealing potatoes in 10th century Ireland, someone groaning and throwing themselves in the large upholstered couch in an era when furniture did not include such comfy things as sofas, etc. etc.

This is why it is so enjoyable to read the well-researched stuff, where the mundane details of daily life seem plausible and correct. No reading glasses before their time, no forks at the fifteenth century banquet and no gardenias decorating the tresses of the thirteenth century noble bride.

As a consequence, a writer of historical fiction spends a lot of time researching, and as it is so much fun to learn new things I suddenly found myself spending hours and hours researching medieval Bristol. I spent way too much time on an article about where the Jewish bathhouse was situated  – well, prior to Edward I exiling all Jews in 1290 – I drew my own rudimentary maps to plot just where the shambles was, and how long it would reasonably take to walk from the eastern to the western side of the town. (Not long. At all…) And then there’s the bridge. Ah, yes, Bristol had its very own version of London bridge back in the day. Built midway through the 13th century and spanning the Avon, it was one of those bridges that was not only a thoroughfare, but also home to all the peeps living in the multi-storey buildings. (And as I write this, I feel a terrible, terrible itch to somehow segue this into some facts about the high-rises that dominated Edinburgh in the 17th century, at times soaring as high as ten or even twelve storeys. But no: I will not go there. Nope. No, no, no) Once done with the bridge – which took quite some time, let me tell you – I ended up totally distracted by a small article about how Robert, Earl of Gloucester and bastard-born son of Henry I, endowed a priory, and then did little leaps of joy when I found a thesis detailing the expenses of the Constables of Bristol Castle during the 13th and 14th century. I got stuck there for a while, let me tell you. 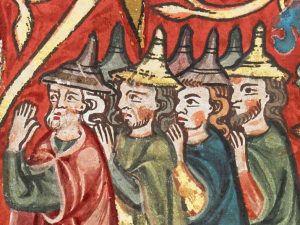 Problem is, Bristol features as a location for like four or five chapters, and most of what I’ve learned will never even make it to my story. I am most upset by this: I have tried and tried to shoehorn in a scene in the Jewry, but Robert has been uncommonly stubborn, saying he has no reason to do business with the Jews and his wife is not going anywhere near the Jewry, no matter how veiled and hooded. I pushed but he wouldn’t budge. Turns out that is lucky, as further research has since indicated that the population of Jews in the latter half of the thirteenth century was very, very small. So small, in fact, that when Edward I pushed through the expulsion, he gained no property previously belonging to Jews in Bristol.

My characters have tendencies to globetrot. Next location? Bordeaux, which means more research that will make me very happy but not really end up in my book, beyond a casual reference. That’s the thing when you’re writing historical fiction, you have to sprinkle your text with enough facts to anchor the reader in your era, but avoid overdoing it so that the reader yawns and says “Yes, yes: got it. We’re in medieval Bristol. Move on!” Actually, anchoring your story is not only a challenge for historical novelists. Good contemporary writers will breathe life into a geographical setting, peeps who write sci-fi must somehow describe this futuristic world so that it takes shape and becomes plausible without drowning the reader in tech details.

Now and then, I toy with the idea of writing a futuristic story, one in which it’s not all doom and gloom. Seems to me we have plenty of doom and gloom in the here and now, and when I read, I like to escape all that and pretend we’re not in the middle of an escalating conflict with potentially gigantic negative fallout. I think many readers reason like I do, a sort of literary version of sticking your head in the sand and counting to ten, thereby hoping the danger has passed when you take a peek at your surroundings. While on the subject of heads in the sand, I just have to take the opportunity to state that I don’t believe ostritches do that. If they did, they’d have been extinct by now, because what hyena wouldn’t leap at the chance of sinking their teeth into a juicy ostrich thigh? But hey, I haven’t really researched the subject, so who knows: a couple of hours reading up on ostritches may totally change my opinion on this not-so-interesting subject.

The thing about research is that it generally takes you off on a tangent. Like when I ended up reading a rather long but very interesting article about the first sign language (developed in Spain in the seventeenth century, this as a consequence of so many deaf children born in noble households and their parents refusing to believe that said children, just because they were deaf, were intellectually impaired. Yay you, I say!) this when I was attempting to establish when Europeans began eating tomatoes instead of just admiring the bright red fruit . Or how I started out reading up about dental hygiene and now know more than I ever wanted to know about early amputations (most of the patients died, poor sods) or about treating open wounds with maggots.

I believe that many historical fiction writers find the research as fulfilling as the actual writing. I know I do, and at times my head swims with all the information I mine through hours and hours on the net. (And boy am I lucky to live in a time when so much is available digitally!) There’s something deeply magical about finding a peep-hole to the past, a sequence of facts suddenly converting you into an armchair time traveller. Best kind of time travel, IMO, as once I’m done with my explorations I can return to the here and now to enjoy my tea -and chocolate! And seriously, what did peeps (and especially female peeps) do before chocolate????