Today, dear peeps, is the release date for my twentieth book. Sheez! I have to sit down and fan myself a bit, I think.

It feels like a very long time since I released my first book, but it is only nine years ago, and if anyone had told me back then that one day I’d count my books in double digits I would have laughed. And the notion of twenty books would have been so ludicrous I’d have been tempted to check that person’s mental health. And yet, here we are. Plus, of course, I already have like five other books in the works…

But today is not about my various Works in Progress, it is about The Castilian Pomegranate. 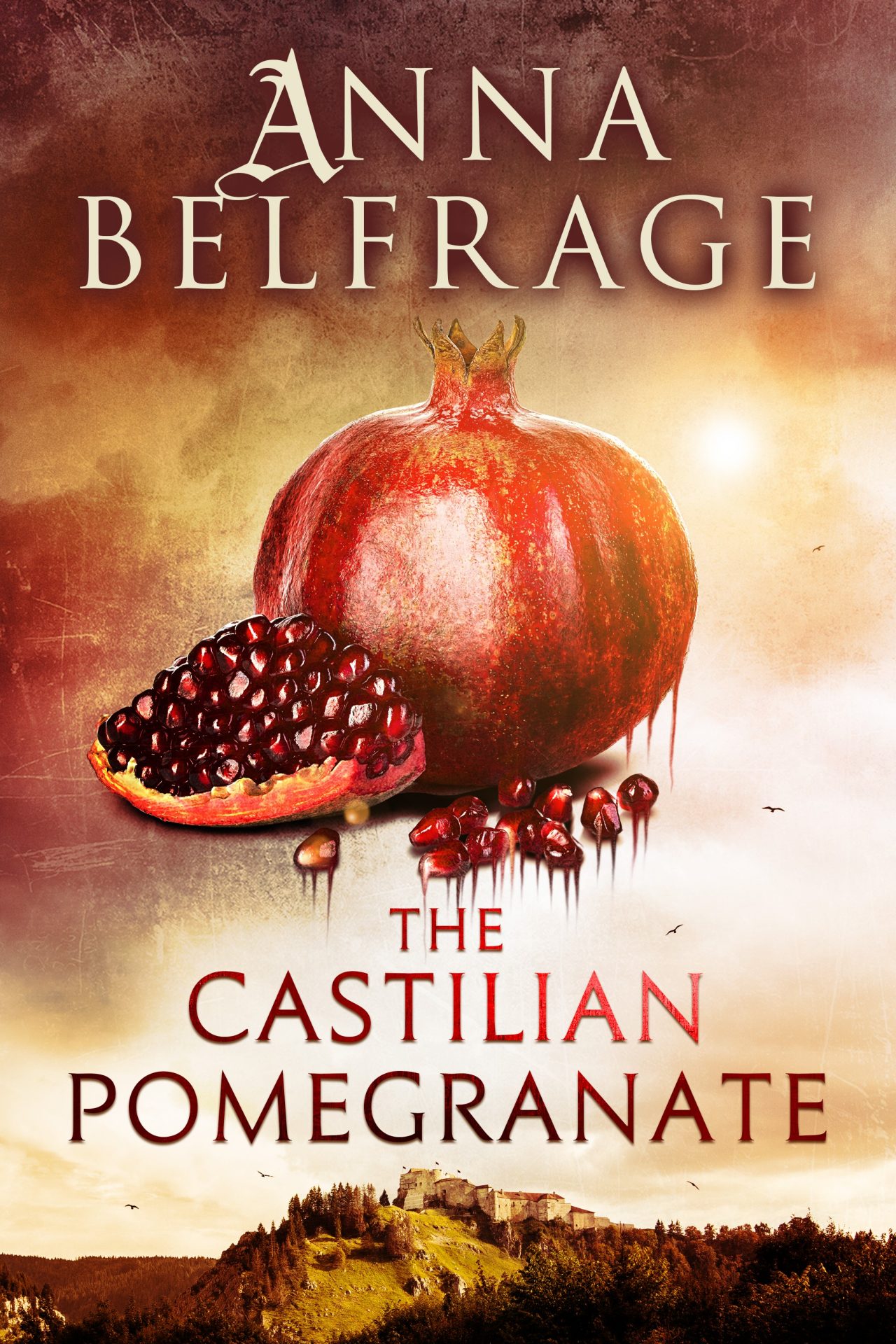 You’ve probably already seen the cover, and I must say I think Olly Bennett from MoreVisual has outdone himself on it. That pomegranate looks so tempting I almost want to bite it—which is rather apt, given that temptation is one of the themes in my book.

The Castilian Pomegranate is set in medieval Spain. Quite the complicated place, let me tell you, and regular followers of my blog have probably seen just how much time I’ve spent researching this period and place, what with all the posts about various Castilian or Aragonese medieval peeps.

Some of you may wonder why English Robert FitzStephan and his wife Noor are in Spain to begin with. It’s not as charter holidays were invited back in the 13th century, is it? Well, the answer to that is that they’ve fallen afoul of England’s queen, Eleanor of Castile. This poor woman has just lost yet another of all the children she would lose (at least sixteen births, only six surviving children. Very, very sad) and she is devastated—and scared, because with the death of Prince Alphonso, her hubby, Edward I, only has one surviving male heir, baby Edward. And as Eleanor knows just how frail babies are, she worries he may die. She also worries that the attrition between Wales and England may flare up into a new war if someone claims the title of true born prince of Wales, and as Noor and Robert have a Welsh foster son Eleanor suspects may be more than just your ordinary orphan, she decides it’s best to get rid of him. Permanently.

Permanently in this context does not mean “kill him”. Why? Because Eleanor believes Prince Alphonso’s death is God’s punishment for what Edward did to the surviving children of the Welsh Princes. So killing a Welsh orphan based on unverified rumours may very well cost baby Edward his life, and that Eleanor would not survive. Which is why Eleanor instead sends Noor and Robert off on a temporary exile to Aragon and Castile, with orders not to return with the dratted child.

Now Spain in 1285 is a complicated place. First of all, there are constant conflicts: between the Christian states, within the Christian kingdoms, within the sole surviving Muslim Emirate. Now and then, Marinid raiders come over from Africa and attempt to push Muslim interests further. And in 1285 there’s the added spice of a French invasion of Aragon—a venture labelled “crusade” because the pope blessed it. Plus, the situation in Castile is volatile, as the new king, Sancho IV, has effectively usurped the crown from his teenaged nephew, thereby causing a permanent rift with his mother.

Where Robert finds Castile and Aragon strange places, to Noor it is a bit like finding a missing part of herself. After all, her mother was from Castile and what a marvellous place it is! Where Noor is delighted to speak Castilian, Robert feels excluded. Where she is the relative of the king of Castile, he is a bastard nobody, a man who has nothing but what his wife brought him. No wonder the tension between them grows, and once it explodes, well who knows what the fallout will be? (I do, obviously. “And me,” Robert says in a dark voice, shifting his shoulders carefully. “And me,” Noor adds, looking so ashamed I almost feel sorry for her.)

So: I give you The Castilian Pomegranate and invite you to accompany me all the way to medieval Spain, to lands riven by war and strife, to a world where brothers betray brothers, where elegant courtiers woo ladies with song and dance while somewhere further away the knights of Castile clash yet again in deadly battle against the Moors. There is blood, there is pain. There is love and loss. There is jealousy and bitter revenge. Amidst all this, Robert and Noor must stand together to survive—but what if that juicy pomegranate and the lures of the Castilian life become a tad too tempting? What then?

1 thought on “Twenty and counting…”