After several weeks of radio silence – I took a much-needed break from everything this summer—I am now suffering from severe “post-writing abstinence”. This is a rather grave condition which must of course be addressed by…taa-daa…writing a new post. Fortunately, over these last few weeks I have collected a list of potential subjects. Oddly, none of those potential subjects feature in today’s post, as instead I’ve been inspired by Mother Nature herself. Bear with me, peeps 😊

In Sweden, some very wet weeks have the mushrooms popping up like crazy in the woods. Many Swedish people are avid mushroom picker—me not so much, as I worry I’ll end up consuming Amanita Virosa a.k.a. Destroyer Angel. Having seen Midsomer Murders, I know just what an awful and painful death that would lead to!

Now, mushrooms tend to grow in the same place year after year, which is not entirely surprising as the mushrooms we pick are but the very small fruits of relatively big (sometimes huge) underground organisms. Pickers who find one of those places generally do not share the location, which is why when you encounter mushroom pickers in the woods things can become a little bit awkward. The mushroom pickers sort of freeze and stare off in the distance. They will give you a curt greeting but will not move out of the spot until you’re out of sight, because obviously any hiker they meet could be a potential mushroom thief.

One of the mushrooms Swedish pickers really like are chanterelles. Lovely, yellow mushrooms that are best eaten fried into crispness and served on toast. This is also a mushroom I recognise, so should I see a stand in the woods, I’ll happily pick them and return home feeling like a triumphant hunter-gatherer. 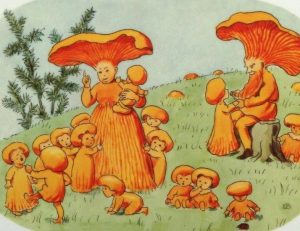 We even have childrens’ songs about chanterelles—a dated, non-PC song about a very patriarchal Father Chanterelle and his mischievous children. In Swedish, this mushroom is called ‘kantarell” and after this rather long prelude this brings me to the real subject of this post. Kantarell sounds very much like cantarella, but where one is an edible mushroom, the latter is definitely not edible. In fact, ingesting cantarella would likely lead to untimely death. And so, dear peeps, let us leave Swedish forests and mushroom pickers behind and instead deep-dive into the murky waters of 15th and 16th century political intrigue. (Admit it: lovely segue!)

Before we go any further, I think it is important to point out that no one really knows the ingredients of cantarella. Some would argue cantarella is nothing but a lurid myth, a collection of fragmentary mentions that insinuate something was being used to rid the Renaissance world of undesirables—in this case the undesirables were those who stood in the way of the Borgia family. Others insist it did exist and was instrumental in paving the way for the Borgias.

The Borgias (in Spanish Borja) were a Spanish family who were to have a major, major impact on Italian politics. First, a certain Alfonso de Borgia became pope, taking the name Callixtus III. This was in 1455 and the Christian world was still reeling after the fall of Constantinople. It is therefore understandable that Callixtus expended his energies on uniting Christianity against the Turks—and apparently he did a good job of it. In fact, during the few years of his papacy, Callixtus seems to have been focused on serving the greater good rather than his own interests. He did, however, do his duty by his family by elevating two of his nephews to cardinals, one of whom is the somewhat more (in)famous Rodrigo de Borgia. 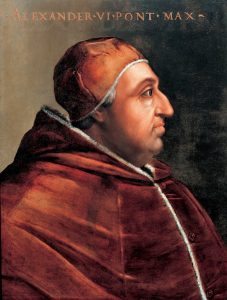 I am not going to spend time dissecting Rodrigo de Borgia’s life – it is a fascinating life, to be sure, from him receiving his first ecclesiastical appointment at the age of fourteen (!) to him becoming the main mover and shaker in Rome during several decades before finally—finally!—becoming pope in 1492, taking the name Alexander IV. As an aside, 1492 is one of those years when a LOT of stuff happened: Columbus “discovered” the New World, even if it took him some time to cotton on to the fact he wasn’t in India (Maths was not his best subject); the Jews were expelled from Spain after centuries of living there: and then there’s Rodrigo becoming pope. Along the way to the papacy, the man did not let his religious career from siring several children, the most famous of them being Cesare Borgia, purportedly the model for Macchiavelli’s The Prince.

Modern historians are reassessing Rodrigo Borgia, painting him as an intelligent and well-educated man who expended his considerable energy in expanding the influence of the Holy See into the complicated political arena that was Europe at the time. Rodrigo was frequently sent to negotiate in various conflicts and was mostly successful in bringing about peace. The first time I came across this gent was when I was researching the Treaty of Tordesillas—a treaty whereby the entire world was divvied up between Spain and Portugal. To avoid a full scale war between the Iberian belligerents, Rodrigo Borgia suggested a fair split: Spain got exclusive rights to one half, Portugal to the other. I am guessing I don’t need to make the point that:
a) most of the world already “belonged” to someone
b) not all European powers felt themselves bound by this treaty
c) the consequences of the following centuries of colonialism were very, very dire.

However, the exploration of the wider world by grasping Europeans is not the subject of today’s post. Let us instead return to cantarella. I stumbled upon this name while browsing the web about chantarelles. At first, I thought this might be the Italian name for my favourite mushroom, but nope, that was not the case.

Many contemporaries to Rodrigo Borgia resented him, especially those whose own journey to the top was derailed by the ambitious and quick-witted Spaniard. And yes, on occasion people did die in Rodrigo’s proximity, but this does not mean he hastened them towards an early death. But rumours were fanned into careful life, people whispered of poisons—a unique poison that only the Borgias had—and soon enough rumours grew into whispered truths, a black legend that to this day clings to the Borgia name.

Am I saying Rodrigo Borgia was as white as driven snow? Of course not. People who aspire to the top job tend to be ruthless when so required. May he have murdered to clear his way? Well, not personally. And yes, I assume poison would be a good way to rid the world of obstructive cardinals—especially if they already were old men. Still: old men die anyway, and it may have been luck just as much as dire deeds that had Borgia’s potential enemies hitting the dust.

The suggestion that Rodrigo Borgia collected rare poisons like other collected precious gems does not seem to be founded in fact, and as to cantarella—purportedly Borgia’s favourite lethal brew—whoever developed it (if it even existed) took their secret with them into the grave.

There are, however a few surviving descriptions of the efforts required to make cantarella, the end product being a “sweet, white powder” that dissolved in liquids. A certain Signore Garelli, chief physician to Emperor Charles VI, had a keen interest in this purported poison and was of the opinion that cantarella was a combination of arsenic and alkaloids of organic putrefaction. To produce the latter, a pig was fed a huge dose of arsenic, suspended by its hindlegs and the froth around its mouth as it died was collected. Eeuw! Mind you, Signore Garelli was speculating close to two centuries after Rodrigo Borgia’s death.

The Rodrigo Borgia black legend extends to two of his children, Cesare and Lucrezia. 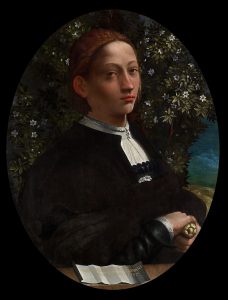 The beautiful, blonde Lucrezia Borgia has often been portrayed as a wanton, evil hussy who happily dispensed poison—cantarella, of course—from a special ring she carried, one that had a cavity in it to hide the poison. There are, however, no facts to support this description of Lucrezia. To me, her life reads like many of the female lives of the time: she was married, she was married, she was married—always at the say so of her father. Yes, her second husband was probably murdered—by her brother, not her. Yes, her first husband was brutally bullied into signing annulment papers—but was that her choice? And yes, in her third, very fruitful marriage, Lucrezia was not exactly faithful—but neither was her hubby, Alfonso d’Este. So while we may well conclude Lucrezia was a lady of passions, this does not automatically mean she went around poisoning those she disliked. 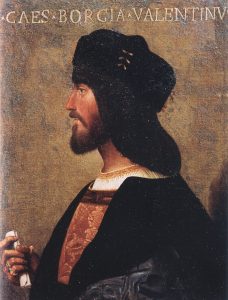 As to Cesare Borgia, he does not strike me as a poisoner. Impressively capable, he was admired by his contemporaries, both for his military skills and his statesmanship—which is why Machiavelli modelled his prince on him. A man like Cesare Borgia made enemies—lots of them. One of these enemies was Fernando II of Aragon, one half of the Most Catholic Kings, a.k.a. Fernando and Isabel, who unite Spain, evicted the Jews, conquered the last remaining Muslim stronghold in Spain and established the Inquisition. (Okay, okay: I will come clean and say I don’t like Fernando II much. He reminds me of his rather unsavoury father. I do rather like Isabel, though…) Ultimately, the enmity between Fernando and Cesare would lead to the latter’s ignominious death—which has absolutely NOTHING to do with cantarella.

So, dear peeps, here we are at the end of a post about a poison that probably never existed—but I hope you’ve enjoyed it anyway. I’m going to go back to my chantarelles, which I intend to brush clean and then fry in butter before serving them on a nice slice of toast. Yum, yum, yum!