Much earlier this year, Char Newcomb contacted me and asked me if I was interested in becoming part of a cooperative effort to help promote and support my writing endeavours. I said YES!, because seriously, I struggle with promotion and could do with some new insight into just how to tap into the hidden persuaders that have people galloping off to download my writing babies.

So far, I’ve had lite luck in defining those dratted elusive persuaders. I suspect it is more down to algorithms than persuaders which reasonably means I—and very, very many other authors—are at the mercy of the big retailers. Still: one should not give up, and I will continue doing my Don Quijote act (battling the giants…err, windmills), but now with the help of twelve other authors.

Allow me to introduce the Historical Fictioneers: Char Newcomb, Annie Whitehead, Judith Arnopp, Alison Morton, Mercedes Rochelle, Helen Hollick, Amy Maroney, Elizabeth St.John, Crussa Bazos, Tony Riches, Derek Birks and Mary Tod. At some point, dear fellow fictioneers. I do believe we need to drape ourselves in dashing cloaks, feathered hats, embroidered gloves and what not, but in this the year of social distancing, us Fictioneers have been a digital endeavour only, hence no need for costume or dashing flair.

As an aside, that last sentence of mine has me considering just how many Teams, Zoon and Webex meetings I’ve attended the last year where the participants have been wearing something adequately business-like on their top half while probably wearing sweats or yoga pants down below. Neither here nor there, so let us instead return to our collaborative little group. 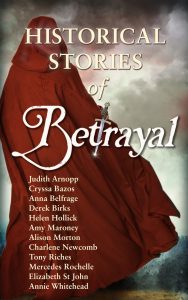 With the exception of Mary, who joined a bit later, the other members of the cooperative went all “Yay! Let’s do it!” when Char suggested we publish an anthology of short stories. There followed a rather long and heated debate as to what we should call it, if there should be a common theme, could we all write in our preferred periods, etc. etc. Conclusion was that there would be a common theme, namely BETRAYAL. And once we had the theme down pat, the title sort of floated down from above, hence Historical Stories of Betrayal as our anthology is called, even if all of us just call it Betrayal. This is probably because our gifted cover artist, Cathy Helms of Avalon Graphics, did a great job of making the word Betrayal pop.

Yesterday was publication day for our anthology. You can now find it more or less on all online retailers, and guess what? It is FREE. Everywhere. (Well, it will be, hopefully already when this post is published, assuming Amazon has done their thing 😉 )You get twelve stories from twelve authors spanning the period from the sixth century to the 19th. You get blood, pain, loss—and betrayal—in spades. You may also stumble upon an author you haven’t read before and find you like what they write.

If you want a story set in post-Roman Britain, we have it. A story set in Anglo-Saxon times? Yup, that too. We drop in on a knight in the late twelfth century. My story features a convoluted betrayal in March of 1330 (and a brief reappearance of Adam de Guirande, lovely protagonist that he is). We have a story featuring rebellion against Henry IV, two stories set late in the 15th century as the War of the Roses enters its final phase. There’s a story set in exotic 15th century Cyprus. Of course there’s one contribution set in Tudor times, and yes, there’s a Cavalier (although a rather rough-and-ready cavalier with no lace or ribbons). We have 18th century pirates and conclude the whole thing with a 19th century diplomatic mission in the recently united Italy. 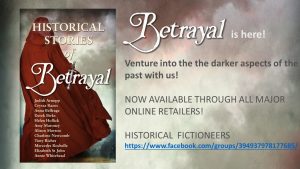 In brief, this anthology is like a smorgasbord, offering the reader quite variety of settings and periods. So what are you waiting for? Pop over and download your copy NOW! https://books2read.com/BetrayalAnthology

2 thoughts on “BETRAYAL IS COMING FOR YOU! Now available through all online retailers”