In a previous post, I wrote about Eleanor, eldest surviving daughter of Edward I and his wife, Eleanor of Castile. That poor lady was destined for a short life, but she lived long enough to marry and have two children, one born in 1295 or so, the second born a year later. When Eleanor died, she was carried back to England to be buried in Westminster Abbey. Her two toddlers, Edward and Joan, were probably too young to understand their mother was never coming back, but at least they had their father, right?

In 1302, Eleanor’s hubby, Henri, Count of Bar, also died. Little Edward, all of seven, was suddenly a landed magnate. Fortunately for the very young Count of Bar, his royal grandfather and namesake had every intention of a) protecting his little grandson b) protecting his own influence in Bar. Soon enough, the young count’s uncle and a couple of bishops were installed as governors, men who would not only ensure Bar was run as it pleased Edward of England, but who would also educate and raise their young count.

While Edward was allowed to remain at home, little Joan was soon to suffer yet another disruption. In April of 1306, Edward I sent for his little granddaughter. Was Joan thrilled to bits at the thought of visiting London? Well, we don’t know that. I do, however, suspect she became quite apprehensive when she realised she wasn’t only going to England to say hello to granddaddy. Nope: Joan was to be married. 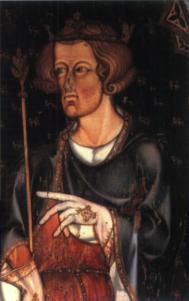 Let us take a step or two back here. At the time, Joan would have been around ten.That was very young for a bride, even back then. But Joan was something of a marital prize what with the Plantagenet blood coursing through her veins, and Edward I fully intended to bestow her hand on a man of his choice. As Edward was well over sixty, I imagine he may have felt time was running out. In his day and age, living to be over three score was rather impressive, and Edward had not exactly led an inactive life. Oh, no: other than crushing Simon de Montfort’s rebellion, conquering Wales, being a very, very determined burr up the Scottish backside and waging war in France, he had also gone on a Crusade, travelled more or less constantly through his realm and in general been a very busy bee.

In the early summer of 1306, Edward was busy planning a major knighting ceremony at Westminster. Other than his own son, the future Edward II, close to three hundred men were to be knighted and celebrated. Young men from all over England had been called to attend. One of those young men was a certain John de Warenne, Earl of Surrey. Edward had a soft spot for John—well, it was more a matter of him having been very close friends with John’s grandfather—and had therefore chosen this scion of an ancient Norman family as little Joan’s groom. For John, it was an honour, even if I suspect it was something of a burden for a twenty-year-old man to be married to a child. For Joan, things must have been very confusing, but Joan was high-born and had hopefully been prepared for a situation like this—even if she was younger than normal. 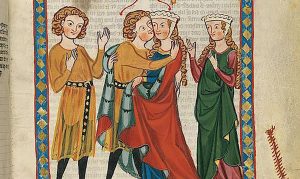 So, Joan and John were married. Our girl of the day was now the wife of a powerful (and rich) magnate, a countess no less. But as we all know, even rich girls can cry, and apparently Joan and John were not destined to hit it off. Initially, they lived parallel lives. John may have had a wife, but he was a man, she was a child, and he saw no reason to deny himself the pleasures of the flesh.

As early as 1309 there are indications things were not well in the John/Joan marriage. How else to explain that John went to the king and requested he be allowed to name his own heir. Hmm, the king said, but after some consideration allowed John to do so—with the caveat that he could not disinherit any children he had with Joan. As she was only thirteen it is unlikely John had consummated the marriage, so maybe all this was just John being careful, anxious to ensure there was an heir to his vast holdings.  Alternatively, he was coming to realise he didn’t like his wife. At all. 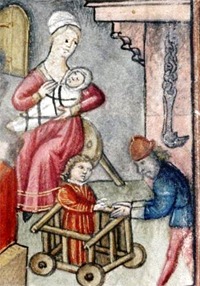 By the time Joan was seventeen, things had gone from bad to worse. There was no pitter-patter of small feet to reconcile Joan with John, instead John was more or less openly living with his mistress, Maud, who’d already given him two sons. John loved Maud and wanted to marry her, legitimising their offspring. What Joan thought of all this is unknown. Yes, she was probably humiliated and hurt, but would she really want to be tied for life to a man who obviously preferred another?

John requested an annulment, stating he’d been pressured into marrying Joan (it’s not as if he could have said no to Edward I when he informed him he was to wed Joan)  and that they were related within the forbidden degree. The fact that Joan, at only ten, had been just as pressured was neither here nor there. Now, had John been lucky in who sat on the various courts and councils who heard his case, he might very well have had that annulment, but unfortunately for him, he’d made an enemy of Thomas of Lancaster who sat on one of the councils. (Once upon a time, John had been Thomas’ retainer and supported him when he protested against Edward II’s favouritism of Piers Gaveston. In fact, John had helped capture Gaveston but was appalled when Thomas and his cronies executed the king’s favourite ) Plus, of course, Joan was Edward II’s niece and an annulment might very well have made Joan happier, but it would also leave her with a somewhat dubious reputation. Once again, whether anyone asked what Joan wanted is uncertain: in this world of men, decisions were left with the men and young wives, no matter how noble, just had to acquiesce to the decisions made by their male betters.

Ten years after her marriage, Joan decided to take a little holiday from all this mess and left for France, leaving her estranged hubby to continue pleading his case for an annulment on his own. Soon enough, the marital issues of the Earl of Surrey would take second place to the general upheaval afflicting England, and it seems de Warenne went back to being a useful servant of the king, helping Edward II defeat the rebels led by Mortimer and Thomas of Lancaster. Once that rebellion had been quelled (temporarily) the king dispatched de Warenne to France, there to captain Englisg forces against the French in the never-ending dispute about the French lands controlled by the English king.

Joan was also in France at the time where she’d been spending time with Edward II’s estranged wife, Isabella of France, who’d been sent to France to negotiate a peace between her husband and her brother, the French king Charles IV. Isabella and Joan were close in age and seem to have been good friends already before all this. Maybe they found further common ground when discussing the faults of their respective spouses, even if Edward II seems to have been a much more conscientious husband than John de Warenne ever was – well, except for the last few years when he’d fallen completely under the influence of Hugh Despenser.

Whatever the case, when Isabella returned to England in 1326 with her son and Roger Mortimer at her side, determined to rid England of the yoke that was Despenser, it seems Joan returned too—with her husband.

The romantic in me perks up a bit at this. Maybe there was a second-chance romance in the wind, now that Joan was a fully grown woman. Whether yes or no, for several years John and Joan lived together. Maybe they really, really tried to develop some affection and make some babies. Or maybe they just cohabited in the same castle for practical reasons –although that sounds a bit unlikely, seeing as John had various residences he could choose from.

Did John continue to see Maud regularly? We don’t know. I’d hold it likely, though, and if he did, then I imagine Joan felt hurt and humiliated and not particularly motivated to make the concessions necessary to make their marriage work. Whatever transpired, in 1337 Joan left John and travelled back to the continent. Her brother had recently died and Joan returned to the County of Bar to support her young nephew, Henri.

Some years later and John yet again tried to annul his wedding. He was getting long in the tooth by now, no longer a young man with his life before him. No, by the mid 1340s, John was pushing sixty. His long-time mistress and their children were all dead, and he was comforting himself in the arms of a new lover, Isabella Holland. John was desperate for a legitimate heir, a son, but once again his plea for an annulment fell on deaf ears. In 1347 John died, the last of the de Warenne Earls of Surrey. At the time Joan was abroad as she seems to have been most of the time since 1337. I doubt if she shed any tears over the man she’d been married to for over forty years. No, Joan went on with her daily life pretty much as always, retaining the title Countess of Surrey for the remainder of her days.

John wrote a will some days before he died. He left gifts to his mistress, to his surviving illegitimate children, to his friends, but nothing at all to the wife he’d been married to since 1306. I’m guessing this indicates that there were no warm feelings whatsoever between him and Joan. I find that sad, somehow, both for her and for him. The de Warenne lands passed to Richard Fitzalan, John’s nephew. This Richard knew everything  about being stuck in an unhappy marriage, having been married off to one of High Despenser’s daughters when he was all of seven. In difference to John, Richard managed to have his first marriage annulled, in the process disinheriting his son from that unhappy joining. But if you want to read more about Richard and his somewhat complicated marital issues, I suggest you go here.

Joan of Bar survived her husband by 14 years. She spent those years ambulating between England and France, primarily the county of Bar, but she died in London in 1361. Her body, however, was carried back across the sea to be buried in the land of her birth, far, far away from her husband’s last resting place. Apt, somehow, that these two who seemingly preferred to spend their lives apart were not united after death.