First of all, sometimes my characters sort of pop up all ready to go. That is the case with Matthew Graham, my first “complete” character. (And he looks very satisfies when I say that, all six feet and more of him lounging against a mental door. Sunlight seeps in, highlighting the odd touches of chestnut in his dark hair, his shirt strains over a broad chest, and…Get a grip of yourself, Anna! ) This 17th century man was inspired by a LOT of reading about the 17th century – specifically about the religious persecution that plagued Europe in the aftermath of the Reformation a century or so earlier. Anyway: in Matthew’s case, he just appeared one day, a serious man with strong convictions. A tad too goody-goody (And don’t frown at me, Matthew Graham) , a tad too dour, and I wasn’t quite sure what to do with him. Until a vision of a red bra had me sitting upright in bed one night.

Okay, okay: yes, I know a red bra is a serious anachronism if I’m writing about the 17th century. Thing is, the wearer wasn’t in the 17th century. She was in our time, humming along with something playing in the background. Well-shaped legs in tight jeans, dark, unruly hair cut short, and eyes like cornflowers in the sun. 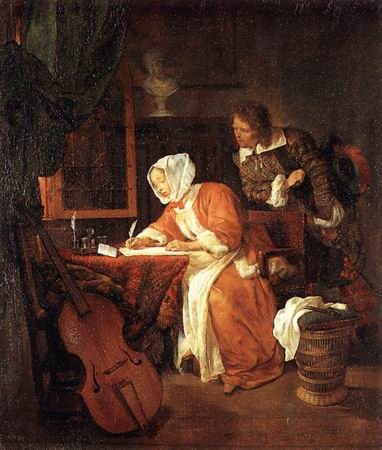 “Who is she?” Matthew asked, peering over my shoulders.
“No idea.” But I already knew she was called Alex, and the tall fair man standing by the cooker was her father.
“I want to meet her,” Matthew said.
“Fat chance. You’re like three centuries apart.”
Matthew fiddled with the worn linen of his shirt sleeve. “She belongs with me.”
“She does?” I looked at the laughing Alex, and I saw a shadow over her, a sadness similar to that which I sometimes saw in Matthew. So maybe he was right: maybe they did belong together, she a nice contrast to his serious disposition. Might liven things up a bit, to have her land in his life.
“Fix it.” Matthew nodded at my keyboard. “Put those magic fingers to good use and bring her to me.”
Which was how I ended up writing The Graham Saga about the rather reluctant time traveller Alex Lind (well, until she met Matthew) and her adventures in the 17th century.

Another of my characters is the consequence of repeated visions of a woman lying on a sheep’s fleece. She is cold, she is dirty and wet, and the man who has just saved her from certain death is also indirectly the man responsible for her recent suffering. This woman is as yet not fully formed, and the man who looks at her shivering form and weeps in silence, plagued by guilt, anger and fear in equal measures only has a name – Jon Crowne – and a face. Those two require a lot of work yet before they can be brought out into the light.

Very often, my characters start as voices. A low, insistent whispering, the odd laugh, a line or two of dialogue. The voice itself tells me little beyond the gender, but soon enough, these voices begin to tell me their story, their thoughts and their dreams, and as they do, the character takes shape and form.

At other times, it’s a gesture. I see someone walking down the street, and the way she whips round when someone calls her name, her hair lifting in the wind, has me smiling, while in my brain the entire little episode is planted into a mental pot, watered by my imagination until that gesture became a figure became a person who then starts to whisper of her dreams and hopes, her fears and past.

Now and then, it is something I see. A hand lifted to adjust an escaped curl. The muscles in a hairy forearm bunching when the owner grips a fork. I watch, entranced, as all those golden hairs move and shift, glistening where the sunlight catches them. And so, just like that, I have my first image of Adam de Guriande, medieval knight and protagonist of my series The King’s Greatest Enemy.
“I’m not that hairy,” he protests, flexing his arm. He is covered in golden fuzz, deliciously so. When I say as much, he flushes.

My latest medieval protagonist came to me as a penitent husband walking up the worn treads to his solar with a twig of apple blossom in his hand. His wife was angry and hurt after having more or less crashed into one of his former bedmates in their–her!–hall and he somehow had to make amends. This particular protagonist stars in my Castilian series, but in the finished book there’s not as much as a floating apple blossom petal. But Robert is still making amends and his young wife Noor, is VERY entitled to her anger… Which is maybe why, in the second book, she…Nope. No spoilers. Not here! And as to that apple blossom (I see the petals drifting, floating to the ground in his wake) I hope to use that scene in another book. Maybe the one about Jon Crowe and the lady shivering on a sheep’s fleece.

I guess the conclusion of all this is that I don’t really know how my characters are created. Sometimes, it seems to me they create themselves, with me the lucky beneficiary. Well, okay: not always so lucky, because some of the people who pop up in my head are not exactly the kind of peeps I’d invite over for tea and cake. In any case, whatever it is that sparks these creative bursts, it is not a process. Bummer. I can’t apply for an Author ISO 9001 certification, seeing as ISO requires the process to be repeatable and measurable.  Instead, I embrace those flashes of inspiration that result in a brand new character – even if sometimes this has a very disruptive effect on my sleep!