Back in the good old days, men wanted sons. Well, OK: back in the really, really old good old days, mothers wanted daughters as most early societies seem to have been matrilineal—but that all changed when our nomadic ancestors settled down and started amassing belongings. Once you have things that belong to you, it becomes important that a) your kids inherit them b) that you know who your kids are. Obviously, b is a no-brainer if you’re a woman, but it is not quite as clear-cut for the men among us, hence the somewhat depressing side-effects that followed in the wake of the human race setting roots. No free love—at least not if you were a woman—an interest in controlling fertile females and a growing fixation on sons rather than daughters to carry the legacy forwards. This last part was a consequence of the “let’s control our women” tendency. A daughter would marry a man outside of the family, thereby potentially depleting rather than increasing her family’s wealth.

Right: let’s get back on track here…Where was I? Oh, yes: men wanted sons. This was especially important for prominent men, like kings and emperors and counts and dukes and what have you. Edward I of England very much wanted healthy sons. His poor wife was pregnant at least sixteen times, birthed a number of boys but they died young—all but the last-born, the future Edward II. The fact that Edward I had several healthy daughters was not compensation for the lack of sons. Edward’s wife, Eleanor of Castile, would have agreed with her husband: a king needed several sons, just in case the heir croaked. It is fortunate Eleanor and Edward loved each other as I imagine begetting all those babies and losing so many of them would have been unbearable without a partner to lean on. More on that you can find here…

However: a couple of sons was a good thing. Too many of them could become something of an issue.  Just because you’re brothers doesn’t mean you go all touchy-feely with love for each other. Instead,  there may be wild and writhing jealousy–like when Cain murdered Abel back in the distant beginnings of the patriarchial society. 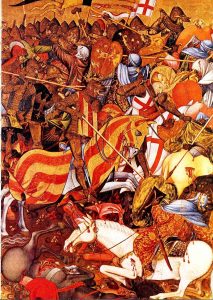 Take, for example, Fernando III of Spain, otherwise known as San Fernando due to his successful contribution to the Reconquista (this is the century-long battle waged by the besieged Christian states on the Iberian Peninsula against the Muslim Moors). Fernando was married to a lady called Beatriz. A successful marriage, it would seem, and fruitful, resulting in six surviving sons. Not something eldest son Alfonso, soon to be Alfonso X, had any reason to be particularly grateful for, seeing as his brothers, and especially one of them, felt entitled to a large chunk of Castile to rule as his own little kingdom.

Alfonso’s relationship with younger brother Enrique was one of more hate than love. There were all sorts of rumours about Enrique, like the rather juicy one that he’d seduced his father’s widow (Fernando’s second wife, i.e. NOT Enrique’s mother) to leverage the power struggle with Alfonso in his favour. Didn’t work. Plus, I am doubtful to this whole illicit lovers thing as Eleanor of Castile (yup: Edward I’s wife mentioned above and half-sister to Alfonso and Enrique) happily welcomed Enrique to visit her, something she probably wouldn’t have done had he’d been involved with her mother.

Enrique rebelled. He played political games with very high stakes which eventually led to him being incarcerated for years and years before he was finally allowed to return home to Castile. By then, Alfonso was dead and Enrique shouldered the role of mentor to the very young Fernando IV, seeing as his dad was also dead.

Fernando IVs dad is yet another of those problematic brothers. Alfonso X married Violante of Aragón—initially not a bed of roses, that marriage, as Violante was a tough, opinionated young woman and Alfonso found her much more of a handful than he liked—and soon enough, Violante was also presenting hubby with baby after baby, five of which were boys. The eldest was named Fernando after his illustrious grandfather. The second was named Sancho, and the brothers were close. Fernando got married, had sons and then up he went and died. Woe, oh woe, lamented Alfonso, my heir is dead, but at least he has left me with a little grandson to succeed me. No way, said Sancho, with my brother dead, I’m your heir.

Well, after that Alfonso’s family never again sat down to share a happy communal meal. Sancho rebelled against his father, claiming that according to the ancient laws, his right to inherit was evident. Alfonso stubbornly stood with his grandson. Initially. Then he caved and recognised Sancho. For a while. Before going back to supporting his young grandson. Let’s just say Sancho came out on top. When Alfonso X died, he became king of Castile and was soon to discover that he wasn’t the only ambitious brother among his siblings. Enter Infante Juan, who was mostly kept under control by Sancho, but who was to become a major, major thorn up Fernando IV’s arse once Sancho croaked.

English brothers were as complicated as Castilian bros. That deliciously dysfunctional family created by Henry II and Eleanor of Aquitaine has it all: a wife who wants to kill her husband; a husband who locks up his wife: sons who rebel against their fathers—and, as icing on the cake, brothers who backstab each other. The relationship between Richard I and his baby brother John may have been a lot of things, but trust does not seem to have been a major ingredient in that particular stew. After all, how trust a brother who does everything he can to stop you from being ransomed to return to your kingdom? Oddly enough, Richard seems to have forgiven John—somewhat. Which, of course, is why John eventually became king once Richard was dead and John’s nephew Arthur had been cruelly dealt with. Yup: the first and second generation of the Angevins is like the best soap opera ever. It has blood, death, betrayal, sex in spades. It also has glimpses of heroism, of a visionary take on the world as a whole thereby offering a nice contrast between good and bad, black and white.

In Sweden, we have a trio of royal brothers who effectively tore each other to pieces. Birger, Erik and Valdemar were all sons to the king Magnus, born around the end of the 13th century. Birger as the eldest was destined to become king. In Erik’s opinion he should have been king. He was smarter, braver, more handsome, more everything really—according to dear Erik. (And as the account of events that has survived to our times is named The Chronicle of Erik and was written by supporters of Erik, we tend to believe he was the better brother) So Erik and his loyal younger brother took Birger captive and obliged him to give them gigantic chinks of his realm. Happy was Erik, happy was Valdemar, grim and angry was Birger. The latter bided his time and some years later he invited his brothers to visit over Christmas. That, dear peeps, was the last good meal Erik and Valdemar would ever enjoy, as the next day Birger had them thrown into a dungeon to starve to death. Best way to get rid of a pesky brother is, obviously, to kill him. In Birger’s case, it backfired. So upset were his countrymen that Birger had to flee the country, leaving his young son in the hands of Erik’s supporters. That young prince did not survive long, let me tell you. Instead, Erik’s baby son was proclaimed king, thereby ensuring that the genes of the purportedly smartest, most handsome, bravest brother did end up on the throne. For a while.

Going back to Edward I, his son, Edward, grew up without brothers. Well, until his father remarried when he was around sixty and quickly fathered two more sons and a young daughter. I’m thinking the future Edward II was not entirely comfortable with his father suddenly presenting him with two brothers, two spares, so to say. Not that his baby brothers were all that much of a threat, being over sixteen years younger, but still. Boys grow up to be men, and as Edward I died while his younger sons were small children, Thomas and Edmund grew up under the shadow of their brother. At times, Edward favoured them, at others, he didn’t. Usually, he didn’t favour them when busy favouring someone else, like Hugh Despenser. Ultimately, this drove Thomas and Edmund into opposition, which was why both royal brothers joined Queen Isabella and Mortimer when they landed in England in 1326 to wrest the crown from Edward II. Not that they phrased their objective quite so bluntly: no, Isabella landed in England because she could no longer bear how the poor English struggled under the yoke that was Hugh Despenser’s endless greed. Hmm. Whatever the case, some months later, Edward II was obliged to abdicate and his son was crowned in his stead. Were his brothers instrumental in his fate? Not entirely, but they had wealth, they had men and when they sided with Edward’s queen, they brought others running after them to join the winning team.

So: many sons could be an issue. No sons was an even bigger issue—at least for some. Younger brothers—and especially ambitious and gifted brothers—were a potential threat. Fortunately, not all medieval brothers were bad brothers. Take Richard of Cornwall, Henry IIIs younger (and in many ways much more capable) brother. He and Henry had a strong bond, one that was never tainted by treachery. Maybe they’d learnt a lesson from the preceding generation seeing as their father was King John. Or maybe the fact that they were both very young, vulnerable boys in a realm dominated by powerful earls after their father’s death made them learn to rely on each other. Henry III would father two sons who were also close, Edward I having a loyal supporter in brother Edmund. Likewise, Edward III was very close to his brother, John. So yes, there are various examples of loving brothers among the high and mighty of the past—but just as many of brothers where fraternal love twisted into hate and envy.