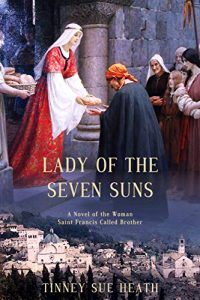 Some weeks before Christmas, I had the pleasure of reading Tinney Heath’s latest book, Lady of the Seven Suns. If you enjoy well-written historical fiction in a somewhat unusual setting (no knights, no damsels in distress, nowhere close to the royal courts of France or England) this book is a must-read. Come to think of it, it’s a must-read for all historical fiction fans!

I just adore it when an author combines incredible historical insight with characters that speak and think in ways one can recognise, and Tinney’s  Giacoma dei Settesoli is one of those characters I will never forget. This 13th century woman reaches across the centuries to make me cry, laugh, cry some more, consider just what sort of almond cakes it is she bakes (failing dismally at first), snicker at her dry wit, and smile through tears at the beautifully portrayed platonic love between Giacoma and St Francis. I had never heard of this formidable lady before – the Holy Church tends to downplay the role of women in the lives of the saints unless said women are said saints – and was eager to find out more about her. So I reached out to Tinney, and below you will find her lovely post about her medieval protagonist. Enjoy!

Francis and Clare. Francesco and Chiara. If you’ve seen any of the  movies, or if you’ve read any of the sentimentalized biographies presenting these two 13th century saints as a sort of spiritual knight and his lady, then you might understandably conclude that Chiara was the most important woman in Francesco’s life.

Not so. There was another woman, a wealthy Roman widow. According to Francesco’s biographer Augustine Thompson, O.P., she “was probably the only woman with whom Francis ever developed a close friendship, one so close that he even called her ‘brother’ and excepted her from the rules excluding women from the cloister.”

That woman was Giacoma dei Settesoli. Francesco’s first biographer, his contemporary Thomas of Celano, wrote, “Jacoba dei Settesoli, equal in fame and holiness in the city of Rome, earned the privilege of special love from the saint.” (She is often called Jacoba or Jacopa, from the latinized version of her name, but in my book I’ve kept to the Italian forms of names, the names my characters would have used with each other.)

Who was this woman, so loved by the saint?

Giacoma was born to the aristocratic Normanni family somewhere around 1190. As a very young woman she married into the distinguished Frangipane family. Her husband Graziano died, leaving her a wealthy widow with responsibility for her two small sons, as well as for a large household and various feudal fiefs, such as the town of Marino, not far from Rome. He also left her saddled with the family’s longstanding lawsuit against Pope Innocent III, a dispute over some land.

The young widow, probably no more than 22 or 23, met Franceso on one of his early trips to Rome, as he was establishing his fledgling order. The two began a friendship that lasted for the rest of Francesco’s life. Giacoma hosted the brothers when they were in Rome, and she also served as their patroness, funding a house and a church for them in Rome.

So we know that she had wealth, power, and autonomy, unlike most medieval women. And we also know that she was passionately devoted to the barefoot holy man from Assisi, the one who declared himself wed to “Lady Poverty.” They seem an odd couple, particularly when you remember that in the 13th century any platonic friendship between an unrelated man and woman was rare and suspect. It was this very oddness that first attracted me to Giacoma’s story (and which, according to some scholars, accounts for the Church’s persistent efforts, even into the 18th century, to ignore or downplay Giacoma’s role in Francesco’s life and in the lives of the early brothers).

Some commentators have said that Chiara was the “dolcezza” (sweetness) in Francesco’s life and Giacoma was the “fortezza” (strength). Historians have long associated Giacoma with traits considered masculine in the middle ages: energy, the ability to get things done, a sense of humor. (Never mind that every medieval woman probably needed those qualities just to survive!)

Certainly Giacoma must have had need of those traits to manage her large estate, her patronage of the new Franciscan Order, and Rome’s turbulent politics. Noble families jockeyed for power, often using the papacy (hence a spate of antipopes, as different factions put their candidates forward and refused to take “no” for an answer). The Frangipani were traditionally at odds with the Conti, the family of Pope Innocent III, so when Giacoma finally dropped the lawsuit against His Holiness, probably under Francesco’s influence, it was a significant decision. 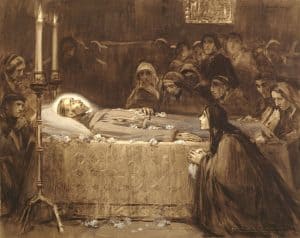 Giacoma is known – to the extent that she is known – primarily for her presence at Francesco’s death. According to the stories, Francesco asked the brothers to send for her. He had just finished dictating a letter and was about to entrust it to a messenger when they heard Giacoma’s knock at the door. She explained that while she prayed, God told her to come immediately, and she obeyed, setting out with her entourage to cover the 180 kilometers/112 miles separating their two cities (via today’s roads – a more challenging route in 1226) .

She brought the gifts that Francesco had asked for in the unsent letter: cloth “the color of ashes” for a shroud or tunic, candles for his funeral, the ingredients for the almond cookies she used to make for him. She also brought incense for the funeral and a cushion with a cover that she had embroidered. Francesco, overjoyed at her presence, told the brothers that the rule against women entering the brothers’ space did not apply to “Brother Giacoma.”

Giacoma moved from Rome to Assisi after Francesco’s death and lived out the rest of her days there. Her patronage did not end with Francesco’s death. She is said to have funded his funeral and also made a substantial contribution toward the building of the Basilica of San Francesco in Assisi, begun immediately after his canonization. She is also said to have commissioned a portrait of Francesco, possibly painted during his life; a 14th century copy of that lost painting is now at the sanctuary at Greccio.

Let’s take a moment to look at the city she left:

Classical Rome was in ruins by the 13th century, though much more survived than exists now, and what wasn’t left over from the days of Rome’s glory looked like any other medieval Italian city, with some parts crowded and warren-like and others vacant except for orchards and gardens. Enterprising Romans had a habit of building their towers, palaces, and businesses on and around the ruins, which is how Giacoma acquired her surname. The Septizonium was thought to have been a temple in honor of the seven planetary deities – thus, Settesoli, or Seven Suns. The venerable temple, already in ruins by the 8th century, was incorporated during the middle ages into the elaborate building complex owned by the Frangipani, Giacoma’s husband’s family. It was dismantled for building material in 1588 and nothing remains of it today. 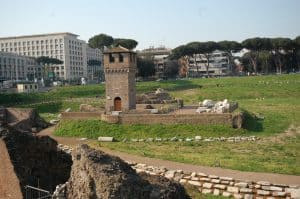 Some of Giacoma’s in-laws had even joined their living quarters and fortifications to the Colosseum. And Giacoma’s home and the tower attached to it probably occupied the south end of the Circus Maximus, most of which was given over to gardens and a mill. A stub of a tower still stands there, the only visible remnant of the vast Frangipani holdings of the 13th century.

We know that Giacoma ended her life in Assisi, though we don’t know how long after Francesco’s death she left Rome. She died on or about February 8, 1239. She was laid to rest in the lower church of the Basilica, the only lay person to be buried there. A 16th century mural marks the place of her original interment, but in 1933 her remains were placed in an urn and relocated to the crypt, directly across from Francesco’s resting place. The thousands of tourists who descend the stairs into the crypt to view Francesco’s tomb every year walk right past Giacoma’s resting place, most without giving it a glance.

Some say Giacoma was a saint, some say she was beatified, and some say nothing official was ever done. A man who was present at the relocation of Giacoma’s remains wrote that when her coffin was opened, for an instant her body was seen to be perfectly preserved, and then, upon contact with the air, it crumbled away.

Dust to dust, as one says… Next time I’m in Rome, I now have a stub of a tower to locate.

I began by gushing over Tinney’s latest book. I shall end on the same note: this is an excellent, excellent read, people. Just rush out and buy it! Now! Here!

If you want to know more about Tinney, visit her website https://www.tinneyheath.com
or her Facebook page https://www.facebook.com/tinneyheathauthor/

2 thoughts on “Not a sinner, not a saint – meet a lady with a helping hand!”