In 1328, Charles IV of France died. He left behind a pregnant wife and many spent the following months praying that the widowed queen be delivered of a son, thereby ensuring a continuation of the Capet dynasty.

One person who definitely did not pray for a boy was Philippe of Valois, cousin to Charles—and second in line to the throne should the baby be a boy. No, our Philippe made another wish:
“Please,” he muttered, clasping his hands together, “please, dear Lord, make sure that babe is born a girl so that I can crown myself king.” He took another turn. “It is time for the Valois to come into their own. Time for me to claim the throne. So please, Father, bless my dear cousine with a girl-child.”

“Wait, wait,” some of you may say. Why wouldn’t a girl inherit? Ah, that’s when we must turn our disapproving glares on another Philippe, namely Philippe V, Charles’ older brother. You see, things in France had been somewhat messy for some decades. Some would say it all began with Philippe IV’s (known as le Bel which means the Handsome ) decision to destroy the Knights Templar in 1307. Tradition has it that the last Grand Master of the Templars cursed handsome Philippe and his family on his way to the stake in 1314. Some months later, Philippe IV was dead, his eldest son, Louis, succeeding him.

Two years later, Louis was also dead (apparently as a result of a very strenuous tennis game – alternatively, he was poisoned) He also left behind a pregnant wife and she was happily delivered of a boy, John I of France. The baby only lived for some days, and once baby John was dead, Louis’ brother, Philippe the Tall, claimed the throne, this despite Louis having a surviving daughter from his first marriage. How did he do this? By invoking the ancient Salic laws.

The Salic laws were codified by Clovis, first Frankish king, in the 6th century or so. The laws were mainly concerned with protecting the core lands of the kingdom which was why women were generally prohibited from inheriting so called Salic land  – after all, women married and any lands belonging to them essentially ended up under the control of their husbands. However, the Salic Laws had been modified over time and there was no specific prohibition for a woman to inherit the throne. Until Philippe V, who loudly argued that anyone with half a brain had to understand that leaving a woman in charge of the throne was essentially giving away the entire country to her future husband. Not acceptable, Philippe thundered, and many of his male contemporaries agreed.

Plus, of course, there was the whole issue regarding the infidelity of Louis’ first wife: was princess Jeanne really Louis daughter, or was she the fruit of her mother’s tempestuous affair with a handsome nobody? (More about all this, a juicy scandal involving the king’s daughters-in-law and two young knights which resulted in the men being executed and the women locked up you can read about here. Ironically, Philippe V’s wife was one of the accused young ladies but he always stood by her, protesting her innocence until she was released from her prison. Plus points to Philippe, IMO. The other two women did not have happy endings… Once again: all due to the Templar’s Curse)

No one had little Jeanne’s back. Soon enough, her uncle Philippe had seated himself on the French throne as Philippe V. What Philippe did not know at the time was that his actions would come back to haunt the Capet dynasty. Some years down the line, his namesake and cousin, Philippe of Valois, would invoke the self-same Salic laws to bypass the female Capet heirs and claim the throne himself… I guess that at the time, Philippe V was sure his little son would thrive and that he and his wife would have more boys. Nope to both, which probably was due to…wait for it, wait for it… the Templar’s Curse.

So: back to 1328, where Charles IV’s widow is presently awaiting the birth of her child while Philippe of Valois is stalking through the royal palaces like a huge hunting cat while silently praying to God to ensure the baby is a girl. He wants the crown, does our Philippe. Badly.

Thing is, some would argue he wasn’t next in line to the throne. More specifically, the young English king, Edward III, would insist he was the rightful heir to the French throne, what with him being a grandson of Philippe le Bel.
“Through the female line!” Philippe of Valois likely said. “And here, in France, a throne cannot be inherited through the distaff line.” (Not that they discussed this at the time. Philippe had his eye on his prize and the very young and overly ambitious English king was merely a nuisance.)

So who was Philippe of Valois and why did he consider himself the self-evident heir to the French throne? Well, he was a grandson of Philip III, a great-grandson of St Louis himself. His father, Charles of Valois, had amassed power and lands throughout his life but other than a very, very brief interlude as king of Aragón, Charles never acquired the crown he so desired. But he did his best to win one, which in some cases left him with anything but a glittering reputation. Still, he served his king faithfully and excelled at war, being one of the generals who forced Edward II to sue for peace after a successful (from a French perspective) campaign in Guyenne. I imagine growing up with a father like that left a young man hungry to prove himself—and how better than by becoming king of France?

Anyway, the French did not want an English king. And while some may have been willing to accept a female ruler, they all preferred a man, a proven warrior. The Salic Law was here to stay, and in this particular case it not only meant Philippe became king of France, it also invalidated Edward’s claims on the French throne. Not that Edward ever accepted that, which was why, in 1337, he responded to Philippe’s confiscation of Aquitaine by launching the first campaign of a war that would deplete his treasury, kill innumerable people on both  sides, leave France a ravaged and destroyed land and last for a hundred years (with long breaks of supposed “peace”).

All of that was in the future in 1328. Instead, Philippe concentrated on making his ascension as Philippe VI as painless as possible. Someone who benefited from that was Jeanne, Louis’ daughter who had been so brusquely disinherited by her uncle Philippe (and yes, we do have a plethora of Philippes in this post, but that is NOT my fault) . In return for her vows of fealty and her promise not to contest his claim, Philippe recognised her and her husband as king and queen of Navarre. (Because Navarre was not Salic land and was therefore not covered by Salic law) Jeanne and her hubby (yet another Philippe with a claim on the French throne) were by all accounts a good team. Other than managing their lands and kingdom together, they also made at least nine babies. Among their offspring are Blanche, “the most beautiful princess in the world” nick-named La Belle Sagesse (the wise beauty) and Charles the Bad, who has gone down in history for being…bad. And for dying in a horrific manner—apt, given how bad he was. More about that in a latter post, methinks 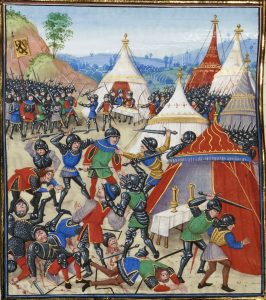 Charles IV’s widow retired from court, leading a quiet life on one of her estates. Her youngest daughter, Blanche, would grow up to marry Philippe VI’s second son and namesake. Philippe himself probably had days when he wished he’d not been fool enough to claim the throne, no matter how entitled he was to it. After all, his reign is a sequence of battles, of humiliating defeats like at Sluys and Crecy at the hands of the English, so capably led by Edward. Add to this the devastation of the Black Death, and I am thinking that now and then Philippe wished he’d prayed Charles’ unborn baby had been a boy rather than a girl. Just goes to prove that there is some truth in that old saying: be careful what you wish for.

When Philippe died in 1350, his eldest son inherited the crown of a country that was no longer as rich or as powerful as it had been in 1328, already marked by warfare and plague. But hey, at least no one contested Jean’s right to the crown. Well, with the exception of that stubborn English king who remained as determined as ever to make France his. Someday. Somehow.