I have been thinking a lot about feet lately. My Fitbit device tells me I’ve walked 650 000 steps in the last month, which is the rough equivalent of 580 kilometres which in turn is roughly the equivalent of having walked from London to Edinburgh and then some—or about a third of the distance between London and Rome. Wow. That made me sit back for a while. Had I walked six hours a day instead of two, I’d have made it to Rome in a month, a rather briskly executed medieval pilgrimage. Clearly, I am putting my feet to good use. Or maybe too much use…

In medieval times, most people only had their feet. They wanted to travel, they had to walk. Only the well-to-do could ride, the rest of our ancestors (the vast majority, in fact) had to square their shoulders and set one foot before the other. In medieval footwear. OMG! No arch support, no air cushioning, no nothing. Medieval shoes, dear peeps, were flat, had thin soles and were not ergonomically designed.  In fact, it was probably better to walk barefoot—and maybe they did, if nothing else to save on the wear and tear.

I wonder if medieval peeps took care of their feet. More to the point, do we? It’s as if the feet are just there, we rarely think about them while they work, and we probably do not pamper them enough. There they are, two relatively small parts of our bodies that carry all our weight. Every day. Repeatedly. We cram them into stilettoes, and the foot-pad groans in protest as now all that weight is concentrated on that even smaller area of our bodies. We stuff them into trainers and they sigh happily, allowed both wiggle room and adequate protection against the hard, unyielding surfaces we so often walk on.

I somehow don’t think we fully appreciate our feet until they don’t work. Like when they have blisters all over, or when we have to undergo surgery to sort out an issue or two, leaving us with a foot we can at most hobble on for a few weeks. Suddenly, that mobility us bipeds take for granted is restricted, and we realise just how grateful we should be for the simple fact that we have feet, that we have legs and arms that work. Not everyone does.

I treat my feet to regular visits at a pedicurist. Every time, she tells me to spend some minutes each evening with a jar of a good foot cream and my feet.
“That’s all they need,” she says. “A good rub each evening.”
And every time I promise to follow her advice, but usually I forget. There are so many other parts that need pampering, specifically the face which I turn on the world and the hands.

In Christian traditions, washing someone’s feet has always been a way to show humility. When Christ brought Lazarus back from the dead, Lazarus’ overjoyed sister produced bowl and soap and, in gratitude, carefully washed and anointed Jesus’ feet. Some time later, Jesus himself washed the feet of all his apostles, his way of leading by example, I suppose. To care for someone’s feet requires that you bow before them. Jesus bowed before his apostles and suggested they go out into the world and do some feet-washing of their own. And off they went, most of them travelling by foot as they set off to spread the word of God.

Where Jesus led, others were to follow. I imagine those barefoot pilgrims ended their daily walk by washing the feet of their companions, taking the time to work out the odd thorn or splinter. Medieval kings would now and then express their piety by washing the feet of the lowest of their subjects. During the 13th century, both England and France has very pious kings—in England it was Henry III and in France it was Louis IX, soon to be St Louis (which says a lot about his piety, right?). These two gents, who were not only co-kings but also related by blood (Louis was the great-grandson of Henry II, Henry was Henry II’s grandson) and by marriage (they were wed to sisters, daughters to Ramon of Provence) had something of a competition going when it came to piety.

Louis collected holy relics and built the glorious Sainte Chapelle in which to house his collection which included the thorn circlet purportedly worn by Jesus when he was crucified. Henry remodelled the entire Westminster Abbey, and while he had no thorn circlet, he did have a vial of holy blood. Both these kings did a lot of feet-washing. Like a lot. Is there genuine humility in washing feet so as to prove your piety? Hmm. I’m not so sure. But those medieval beggars who had their feet cleaned and dried probably didn’t complain, although I suspect the few pennies they got in alms were far more precious than their royally cleaned toes.

I’ve never had a king wash my feet. I guess the practise of washing feet to indicate humility has somehow faded from existence, just as the ancient tradition of having the king heal scrofula by touching you. (Now THAT is a very odd tradition, IMO. Unfortunately, not the subject of this post) But I had a mother-in-law who used to wash my feet. Not out of any desire to show humility. No, in her case it was more to show she loved me.  She’d have me dunk them in a mixture of hot water, baking soda, salt and dish-washing liquid for long enough that they went all wrinkly, and then she’d place them in her lap and use her foot file to grind away any calluses. I’d sit there with my eyes closed and almost fall asleep as she spoke quietly about this and that, her strong fingers massaging toes and instep. Almost as wonderful a feeling as when someone washes your hair and massages the scalp… 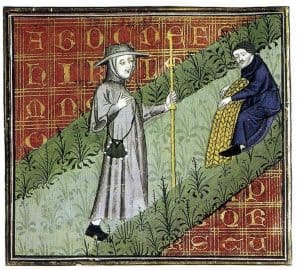 I attended a high-tech seminar last year and one of the speakers was talking about self-driving cars. The gent in question was Dutch, had extensive experience within the auto industry and rather quietly wondered if maybe we should think of walking and biking a bit more and strive to reduce the total number of cars (and the time we spent in them), whether self-driven or not. He has a point. The human body was made for walking. Our ancestors stamped out what was left of last night’s fire, slung their few belongings over their shoulder and walked through most of their day, always on the move. Theirs was a journey without a fixed goal, a slow exploration of the world that lay around them. A moment to stop and gaze at a dew encrusted spiderweb, another to stoop and pick an edible herb. Time spent in contemplation of the wonders that surrounded them—that still surround us. To walk is not only a physical experience. It cleanses the mind, fills our lungs with air and our hearts with the strength required to sort out our various issues. We need to walk—according to said Dutch expert at least one hour and six minutes per day—to feel OK. In this, my feet totally agree although they grumble a bit when that one hour becomes three.

Last month, I walked over 650 000 steps. I will likely walk a bit more this month. Since the beginning of the year, I’ve walked enough steps to take me to Rome and back. I peer down at my feet. I’ve always liked how they looked, but I haven’t fully appreciated just how hard they work until I got that little notification from Fitbit. I guess they really deserve some foot cream and some daily TLC. After all, we have miles and miles to walk, my feet and I. Miles and miles, all the way to Rome, to Santiago de Compostela, to Trondheim, and back. And yup, they’re all medieval pilgrimage routes that I hope one day to tread. Fortunately for me, I’ll be walking with modern engineered footwear. The kind that medieval peeps—and their feet—could only dream of. 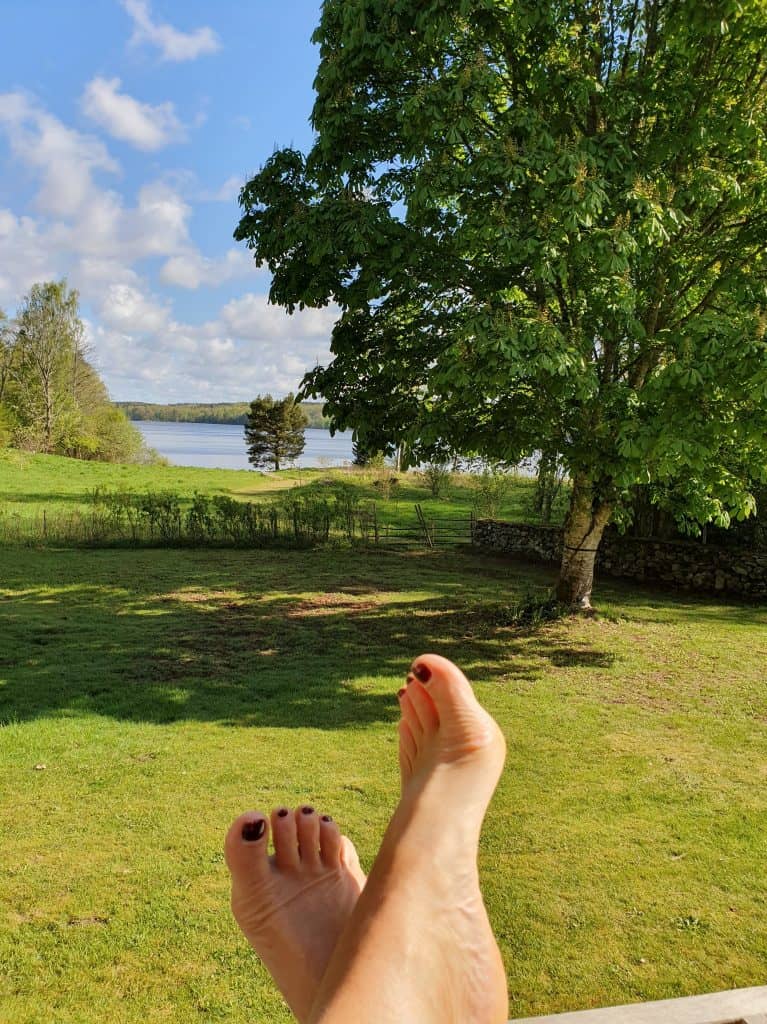