Some months ago, I visited Nationalmuseum in Stockholm. Even those with no Swedish can probably work out that Nationalmuseum means National museum—somewhat of a misnomer, IMO, as a lot of the stuff on display comes from other places than Sweden. That’s what happens when an ambitious up-and-coming military nation sweeps through a broken Europe in the 17th century—countless treasures were carried back to Stockholm, often according to a specific list drawn up by Queen Kristina who knew just what cultural artifacts she wanted to display in her somewhat sombre royal home.

Neither here nor there, as this post is not about Queen Kristina or the avaricious Swedes of the Thirty Years’ War. But I do have a lot of stuff about Kristina on my blog, like here and here—this last being a post I really recommend if you want to read about Kristina’s love of her life. Very sad—and once again, neither here nor there. Sheesh: at times I am as distracted as a fly in a bottle trap.

Many of the portraits in Nationalmuseum come from abroad. This portrait, however, definitely does not. I give you a picture of a rather splendid 16th century lady. I must say that hat is somewhat daunting… 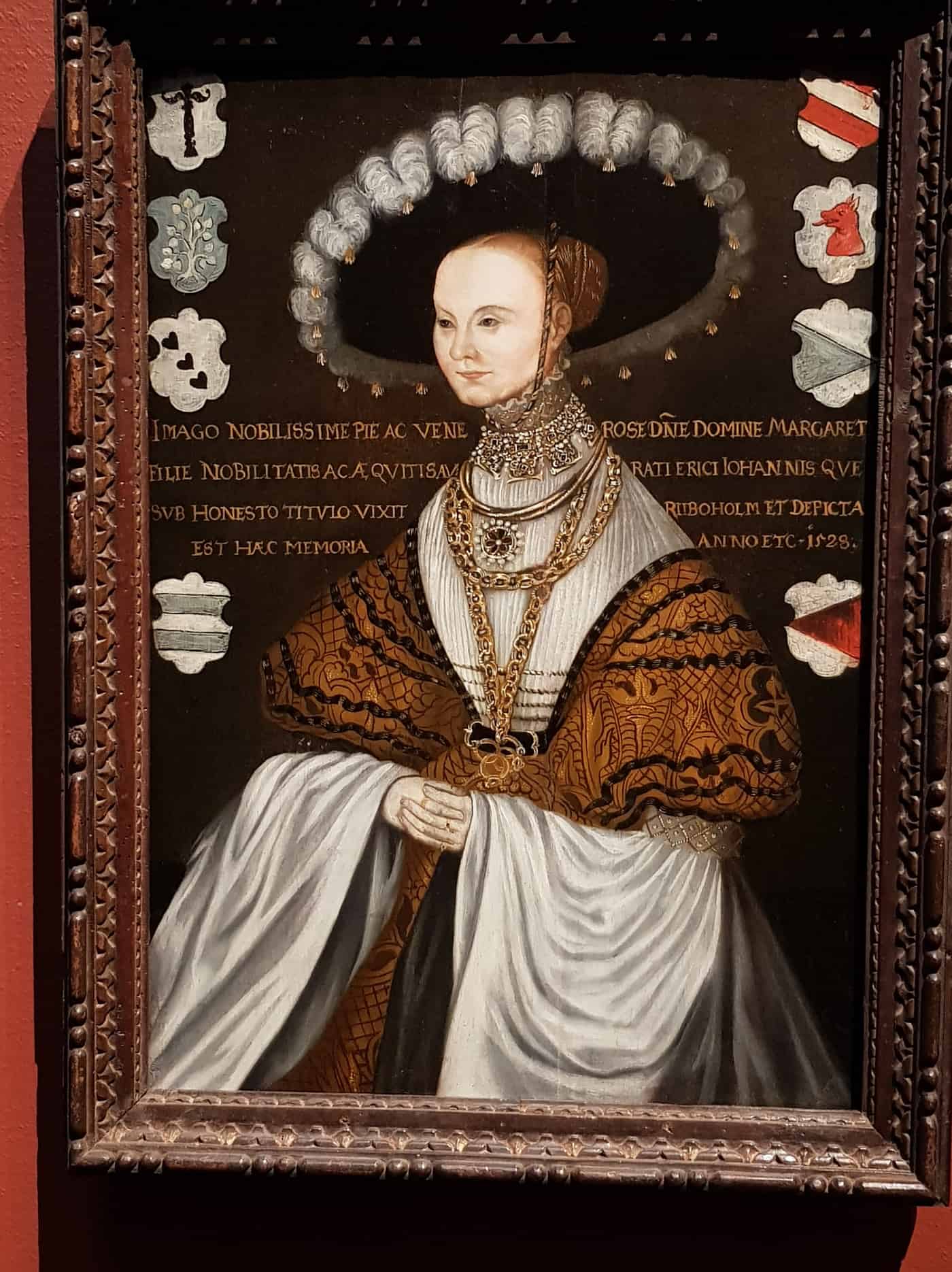 Thing is, no one really knows for sure who the lady is. Typical, I believe, of the period in that women left little behind in the form of comments in the various chronicles. Most people lean towards this being Margareta Eriksdotter Vasa , sister to Sweden’s powerful Renaissance king, Gustav Vasa. Those of you competent in Latin will likely agree after deciphering the lettering, except we don’t quite know when it was added. Some say the lady is a representation of Gustav Vasa’s first wife, Katherine of Sachsen Lauenburg.
“Me?” says Katherine with a sniff. “In such outdated clothes? Not likely!”

I lean towards this being Margareta – mainly because there is another portrait of the lady in question revealing a very similar taste in hats and a general resemblance in the features. (see further down) But we do not know. Not for sure.

Anyway: the lady in question exudes wealth, don’t you think? That extravagant hat, the heavy gold chains, the yards and yards of fine, pleated linen. Oh yes: this sitter is rich. Whether she is pretty is, I suppose, up to the beholder. I think she looks a tad grim, but by the time this portrait was painted in 1528, Margareta had every reason to feel a tad bitter and disenchanted with the world. She is also a red head – you can see a patch of her hair just below her hat, which just makes me even more prone to believe she is related to Gustav Vasa who was known for is red-blond hair, long beard and very, very shapely legs (which he happily displayed in bright yellow hose when he could). Whether Margareta had shapely legs is unknown. Women of the times did not display their limbs, no matter how well-formed.

So let us go with this being Margareta. If so, at the time of this portrait she was about 25 – 28 or so. We have no idea when Margareta was born, but she was married in 1516 which would indicate she was probably born around 1500 – 1504. Her father was a royal counsellor and often about court. The family was well off and Margareta was the recipient of a surprisingly thorough education, despite being a girl. She could read and write both in Swedish and German and was a keen reader who exchanged letters and books with various dignitaries throughout her life.

Her first husband was Joakim Brahe. This gent was probably close to twenty years her senior—at least to judge from his portrait—and came from a wealthy and influential Swedish family. Soon enough, Margareta presented her husband with a son. 1518 saw the birth of a daughter, 1519 yet another girl, 1520 a son (fortunate, as son nr 1 was dead by then). I’d hazard this was what Margareta’s life would have been like for years and years—a baby every twelve months or so—had it not been for the Stockholm Bloodbath.

This is one of the more traumatic events in Swedish history. Very briefly, Sweden and Denmark had been at war for years and in 1520 the Danish king, Kristian II, finally managed to force Sweden into submission. At his coronation in Stockholm, he decided to arrange a little surprise for all those Swedish nobles who had fought for Swedish independence (i.e. most of the nobles) by arranging for the execution of these said nobles. The streets of Stockholm ran with blood and just like that Margareta had lost her father and her husband. Not her wily brother, however, who was to live to fight another day.

Margareta was now a widow. Even worse, she was an imprisoned widow, and late in 1520 she and most of her female relatives ( principally among them Kristina Gyllenstierna who had put up such a spirited defence of Stockholm against the Danes) were hauled off  by Kristian II to a not so gentle captivity in Copenhagen. Had it not been for Kristian II’s Hapsburg wife, the captive ladies might even have starved to death, but thanks to the Danish queen they were at least fed sufficiently to keep them alive. Still, being locked up in a damp and uncomfortable place with your babies cannot have been fun. Due to conditions, several of the women died and there must have been days when Margareta despaired of ever seeing the sun again.

Gustav Vasa had not been idle. The murder of all those nobles had incensed the Swedes and by 1523 Gustav was in control of Sweden, the Danes forced to retreat. In 1524, Gustav Vasa brought his womenfolk home and I imagine there were tears and hugs and more tears.

There was also a shortage of men. After all, Kristian II had effectively decapitated the Swedish nobility and the spared youngsters were still boys, not men. Gustav’s solution to this was easy: his widowed relatives had to marry again, thereby tying new, strong males to the fledgling Swedish realm.  Gustav was not a man to beat around the bush. “You’re getting married again,” he told Margareta. “Behold your new groom.”

Was Margareta delighted? Hmm. Gustav’s choice was a German gentleman from Lübeck, Johan of Hoya, who had become indispensable to Gustav as he worked strenuously to rid Sweden of the Danish yoke. Yes, Johan was of good birth, but first and foremost he was Gustav’s crony—at least initially. However, no one asked Margareta’s opinion and so, in 1524, she married again.

Some years later, she hastily followed her husband into exile when the Gustav/Johan relationship suffered a severe breakdown. I imagine the fact that she did go with Johan indicates that by then she’d developed some sort of fondness for her second husband, father to her two youngest children. With her went her surviving children from her first marriage.

Johan died rebelling against Gustav. Not good—at least not from Margareta’s perspective. Come to think of it, not from Johan’s either. Her brother magnanimously suggested Margareta return—he promise he wouldn’t punish her (!) for her husband’s disloyalty. Now either Margareta did not trust her brother, or she liked her life away from the Swedish court because she turned Gustav’s offer down. Two years after her husband’s death, Margareta went to join him in the hereafter and was buried in Reval (present day Tallinn).

Her eldest surviving son, Per Brahe, would go on to become something of a power-house in Swedish politics. Further down the line, his granddaughter, Ebba Brahe, would inspire the passion of Gustav Vasa’s grandson, Gustav II Adolf. Not a match made in heaven as per Gustav II Adolf’s dear mama, and you can read more about that here.

Margareta’s sons by Johan of Hoya stayed well away from Sweden. One would go on to become a bishop and od the other little is known beyond the fact thathe survived infancy and childhood. Always a good start, hey?

So, there you have it: the life and woes of Margareta Eriksdotter Vasa, who may (or may not) be the lady in that rather magnificent portrait at Nationalmuseum. I think she is. I also think she had rather bad taste in hats, but clearly the one she’s depicted wearing was a favourite as it appears in BOTH portraits!

4 thoughts on “A mystery lady with bad taste in hats”