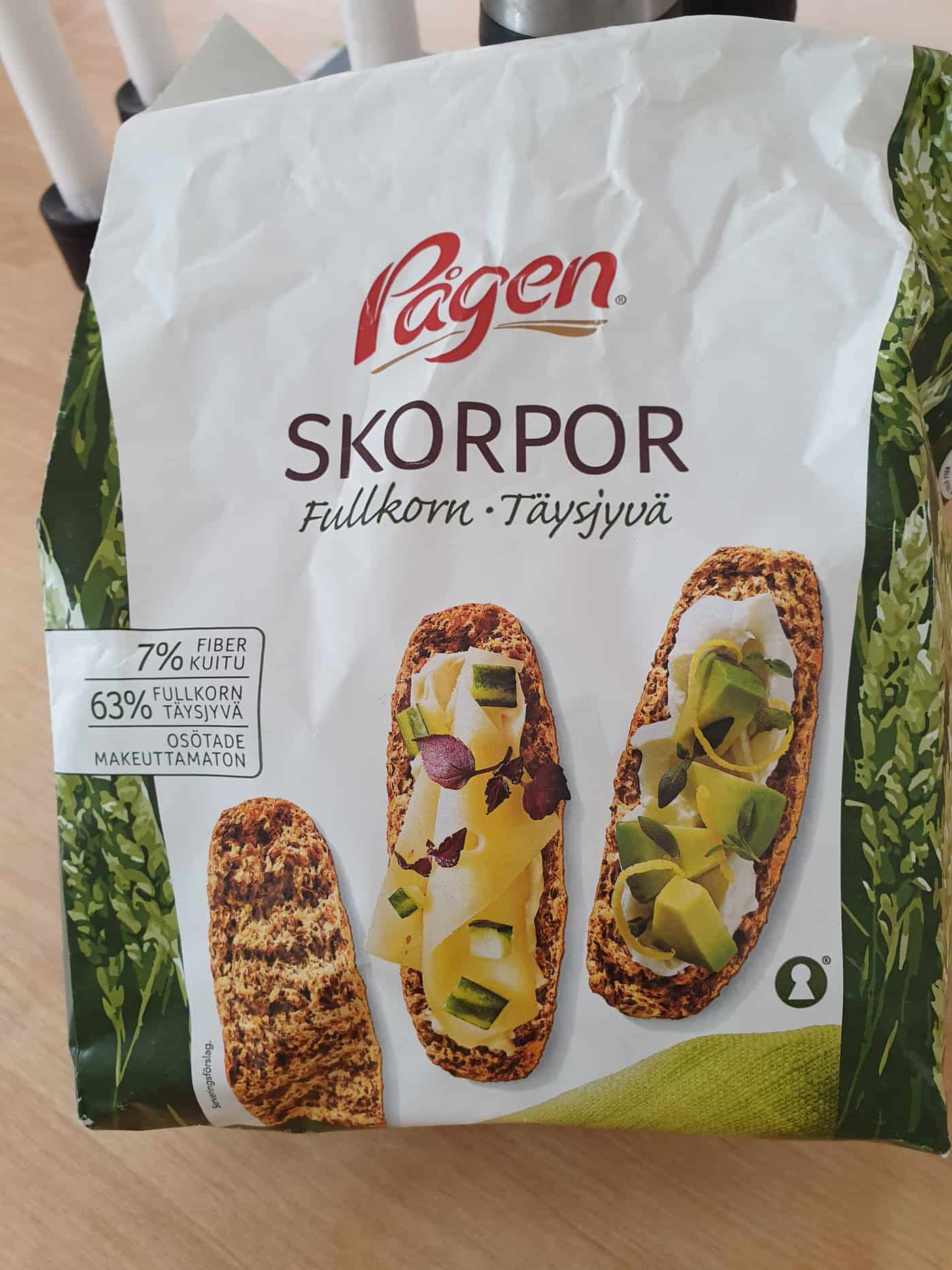 This morning, I had a crisp roll with my tea. Crisp rolls are one of Sweden’s contributions to the world, albeit we call them “skorpa”. Traditionally, crisp rolls were made from left over bread that was cut into slices and then baked in the oven at low heat for a very long time, resulting in a very hardy end product – a bit like a ship’s biscuit, if tastier.

From crisp rolls, I went on to consider what other contributions Sweden has made to our global world. Leaving aside such relevant words as “ombudsman”, “smorgasbord”, “gravad lax” and our latest contribution, “flygskam” (shame of flying, i.e. people affected choose not to fly but take the train instead due to environmental considerations) it’s not exactly a long list, although one could argue that some of the inventions are very, very relevant. And some of the inventors were very, very dashing 🙂

We’ve had a couple of kings with global ambitions. Whether they were a contribution to the world or a hazard is, I suppose, dependent on whether you are Swedish or not. In Germany, small children were scared into obedience with Gustav II Adolf, our 17th century warrior king. “Behave, or Gustav Adolf will kill you!” irritated mothers said to their spirited brood – although spirited broods must have been something of a rarity in the German states as starvation and homelessness was an immediate effect of the various battles, soldiers looting where they went and trampling growing crops underfoot. In defence of Gustav Adolf, he did keep his men under control most of the time – but not always.

Anyway: the conclusion is that Gustav II Adolf is probably a doubtful contribution to mankind—unless you’re a die-hard 17th century Protestant. Then he’s a hero. I am rather fond of this round king with his silly little goatee and his huge ambitions when it came to yanking Sweden into the modern times which is why you can read more about him here. And here. And here. And here (And yes, they are all VERY different posts)

We also have Karl XII, so famous in his time Voltaire wrote about him. Hmm. I say it again: hmm. Odd fellow, this Karl, and no matter how one twists and turns things, I can’t really find any arguments for considering him a contribution to either mankind as a whole or Sweden specifically. Maybe if he had done less bear-beating (!!) and more diplomacy things would have turned out differently. I have, however, written about him as well – here.

The zipper is a Swedish(ish) invention. Yay! Something truly useful. So is the AGA range that features so predominantly in UK country living. Gas-lit lighthouses is yet another thing us Swedes have given to the world as are ball-bearings, milk-cream separators, adjustable spanners, pacemakers and dynamite.

The inventor of dynamite, Alfred Nobel, quickly realised his invention was something of a Pandora’s Box: what had been developed to facilitate mining and construction could also be put to excellent use in exploding people to smithereens. This sat badly with dear Alfred, which is why he instituted the Nobel Prize as some sort of compensation to the world. Hang on: that is not quite how it happened, and despite Alfred not being the main subject of this post, I just have to quickly share with you the “why” behind the Noble Prize:

Turns out, Alfred Nobel’s brother died and in France a newspaper thought it was Alfred who had died and published an obituary neatly titled “Le merchant de la mort est mort” – the merchant of death is dead. In brief, the text condemned Alfred Nobel for amassing a fortune as an arms dealer (yes, dear reader: an arms dealer. Other than dynamite, Nobel also produced and sold cannon and other armaments. He’d developed a fascination with explosives at a very, very early age) Now Alfred was unmarried and had no children, and it gnawed at him that people would remember him as a ruthless soul who sold anything to make money, which is why he decided to set up the Nobel Prizes.

With that, let us leave Nobel and revert to the subject of contributions, which do not always come in the shape of inventions or consumables. Relatively recently, Sweden has given the world a new concept: Death Cleaning, or as we say in Swedish Döstädning.

In 2017, Margareta Magnusson published a self-help book called Death Cleaning with the rather humorous subtitle “not at all a sad thing to do”. The English version it is called The Gentle Art of Swedish Death Cleaning. I would like to point out that as far as I know, there is no Swedish art of Death Cleaning. We have not been taught to Death Clean, in fact I would go as far as to suggest that prior to Ms Magnusson’s book, most Swedish people had never heard of Death Cleaning –or given it much thought.

Not so any longer. Now, we are all lumbered with the responsibility of de-cluttering our homes prior to our demise. It is recommended we sort libraries, papers, wardrobes, closets, cellars, attics all in good time to our expiry date. Therein, dear peeps lies the problem. I do not know my best before date. In actual fact, I do not want to know, so when am I supposed to start acting like a responsible soon-to-be-corpse and start de-cluttering???

A year or so ago, my mother died. I do not think she had been afflicted by a serious desire to Death Clean, this evident in her cupboards and such, but what had been thoroughly sorted was her correspondence, what was left for us to find neatly sorted and labelled. This I see as a protection of privacy. We all have things we’ve done and said that are intensely personal and even after we’re gone we would prefer them to remain private. This is far more difficult for us who live in the digital age to fully achieve. Once you’ve written something and saved it on a digital medium it is more or less impossible to totally erase. Mamma, however, belonged to the generation that wrote letters – with ink, on paper. Those she didn’t want us to read she simply burned or threw away.

Going through my mother’s clothes and cupboards was not only a lot of hard work. It also offered opportunities to remember “Oh, look, there’s that UGLY vase what’s-his-name gave Mamma and which she only ever used when she knew he was coming to visit” or “Ha! Remember how we used to quarrel over who got their ice cream in this dish?” Table cloths were shaken out and inspected and this is where it got a bit difficult, because so much of the stuff my mother had so carefully laundered and folded away was old. And worn. And frayed along the edges. Same thing went for the crockery, the glasses: where before we never noticed just how much the wear and tear of a long life had left its mark on stuff, now we did. The sofa she was so proud of sagged in places and seriously needed to be reupholstered. The ancient carpet was so worn at one end one could see the warp threads. 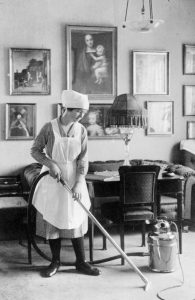 Would I have preferred it that Mamma had done her own cleaning and sorting? Not so sure. First of all, she wouldn’t have seen the little defects anyway: to her, the table cloths were still as good as new, and the precious wine glasses she’d had since she first married my father might only be seven but they were so, so pretty (but not so whole, it turned out) To her, the things we discarded were part of her life. They probably heaved with memories.

Secondly, as we went through her things, my sister and I were obliged to set time aside to do just that. Time for us to be alone with the remnants of our family home around us, time to talk our way through shared memories, to remember our parents. Had Mamma already de-cluttered, the process would have been that much quicker—but not necessarily better.

So, leaving aside the fact that I have no idea WHEN to start my Death Cleaning process, I am also somewhat skeptical of the notion as such. Yes, I am Swedish, but the Gentle Art of Swedish Death Cleaning is, I believe, not for me. Much better, IMO, to move houses now and then. That really forces you to sort through your stuff without the somewhat morbid touch the term Death Cleaning inevitably brings in its wake.

And as to the correspondence I do not want anyone else to read, well that falls under the heading “Common Sense” rather than Death Cleaning. It is also incredibly meagre, I noticed today when I dug out some of our old boxes. So meagre, in fact, one could call it non-existent which now leaves me agonising over the fact that maybe I have led a far too boring and unadventurous life.

With that, dear readers, I leave you to ponder your own Death Cleaning challenges. This boring and unadventurous writer feels an urge to pamper herself with a nice cuppa and some of those tasty crisp rolls. Did I mention they were Swedish?

6 thoughts on “Death Cleaning – a gentle art to embrace?”