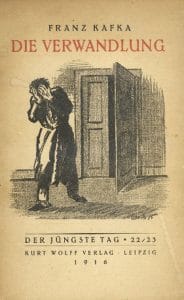 Several years ago, I saw a stage version of Franz Kafka’s short story Metamorphosis. I’d read it before—my mother kept a steady stream of classics coming my way, and rated Kafka highly. The story left me itching all over, a disturbing mix of black humour and despair—most apt when telling the story of the young man who wakes up one day, transformed into a giant insect.

Gregor Samsa, the protagonist of The Metamorphosis, takes his transformation surprisingly well–initially. One day he’s an up-and coming sales man, the next he’s a creature with too many legs that has people screaming in fear. Ultimately, his transformation leads to his death. It is unclear if he actively takes his own life or merely dies, emotionally squashed to death by the metamorphosis that left him a huge, ugly insect.

I guess the underlying message is that all change comes at a price. In the case of poor Gregor, no wonder, right? But this is also valid for good change, i.e. when one does not wake up with six legs and tentacles but rather as a better version of oneself—at least on the outside.

I have spent the last ten months performing my very own metamorphosis. In early October of last year I was informed I had to undergo back surgery to sort out the issue of my constantly cramping and hurting legs. I was also told that unless I lost a lot of weight, there would be no surgery.

My initial reaction? Well, I went out and bought myself a huge chocolate bar. Lose weight? Me? I have battled multiple challenges in my life, I am stubborn as hell and generally never give up, surmounting most hurdles thrown my way. Except for one. My weight.

Now here I was, trying to quell the panic that threatened to asphyxiate me. Unless I had that operation, I was destined to an increasingly crippled life. But to get that operation I had to succeed at the one thing I had always failed at. Always.  A catch 22, an impossibility.

It is remarkable what one can achieve when there is no choice. After wallowing in despair for a couple of hours and crying my eyes out I sort of straightened my spine, took a deep breath and decided to research HOW to do this, never mind that I had no idea if I’d be able to do it.

Turns out I could. I’ve lost over a third of my original weight. My back surgery has come and gone and I am now leaner and meaner (not really) and in possession of skinny jeans and lacy underwear and stuff I haven’t worn for ages. When I stretch, I can count all my ribs. What can I say? I stretch a lot, these days…

But every time I see myself in the mirror I blink, experiencing a moment of absolute terror before I realise that person looking back at me is me. I don’t really recognise myself anymore—and not only in the physical sense.

I had not expected that losing weight would so affect my personality, but it has. Where before I retreated behind a façade of jovial enthusiasm to distract people from my size (something I probably thought much more about than anyone else) I no longer do. Yes, I am still a generally outgoing person, but I can allow myself the luxury of sitting to the side and sort of blending with the woodwork.

Plus, I am starting to realise that I’m probably not quite as bright-eyed and bushy-tailed as I’ve always thought I was. Surprisingly, with all that shed weight I’ve connected with a very squashed and rather fragile inner self—one that is very, very uncomfortable with suddenly not hiding behind a façade of energetic take-charge behaviour.

Truth be told, I am scared. Scared, obviously, of ultimately failing and gaining all that weight I’ve lost. Scared of coming to terms with the new me, the person I now and then see shine through my eyes when I stare at this unrecognisable person in the mirror. Scared of becoming too angry with myself for not having addressed this issue before, when I was still young and deserved to have some “you look wow” time. I’ve never had “wow” time—and until recently I’ve managed to convince everyone including myself that I didn’t want “wow” time. Guess what? I lied.

This is when I should stand up, find a mic and belt out “At the age of thirty-seven, she realised that she’d never ride through Paris in a sportscar with the warm wind in her hair…” I am much older than thirty-seven, but the sentiment still applies. I have lost out on so much due to not addressing that gigantic albatross round my neck – my weight.

Obviously, the fact that I’ve walked about without doing anything about my dead albatross (and any moment now I’m going to start quoting Coleridge, just so you know. Except I can’t find anywhere where “water, water everywhere” applies…) is because losing weight is not easy. People who don’t have weight problems tend to be somewhat condescending when discussing such issues with those of us who do.

“It’s just a matter of making your mind up,” they’ll say. “You know, just like quitting smoking.” Err…No, it isn’t. In difference to smoking, the big, big problem with losing weight is that you can’t stop eating. You have to control what you eat. And to do that, you have to break the habits of a lifetime, suppress those impulses that have you handling every single emotion and challenge in your life by putting something in your mouth. I used to eat when I was angry, sad, happy, relaxed, up tight, concentrated – well, more or less all the time.
“Ah, yes,” one therapist told me years ago. “It’s your childhood. We’ll just have to dissect it to understand the reasons behind this desire for oral gratification.”  For some odd reason, that comment put me off that particular therapist. Besides, I’ve never believed in rooting about too much in the past. Much better to invest my energies in the present and the future.

In my case, what I needed was motivation. I got that in spades last autumn. Since then, I have totally changed my life and in the process I’ve had to deal with the fact that I am no longer quite the same person I used to be. I also have to handle moments of deep anxiety, instants when something wet and dark slides up my spine whispering that I will probably fail this time as well, so why not just give in to temptation and go on a major binge? I can handle that little voice—or so I’ve discovered. I have bigger problems coping with the somewhat bruised and retiring me I have discovered in my depths. A me that wants to cry a lot. A me that shrinks from meeting new people. A me that sometimes wants to spend entire days hiding in bed. A me that is not me—and yet she is. Very complicated, right?

It is therefore fortunate that
a) I am basically an “onwards and upwards” sort of person
b)I am good at handling change. Truth be told, all of us are good at handling change—it’s just that many of us don’t realise that. After all, the one constant in life is change and if you can’t handle it, things get very tough very quickly.

In conclusion, I’ve decided not to be scared. Instead, I congratulate myself on having gone through a metamorphosis that has not resulted in six legs and tentacles but rather in a new wardrobe. And a new, somewhat less exuberant self. I can live with that, I say to myself as I smile at the stranger in the mirror. Well, not an entire stranger, thank God. I still drink tea by the gallon, I still close my eyes in bliss when eating chocolate. Except that these days it’s never a bar of chocolate—it’s a square or two at most.