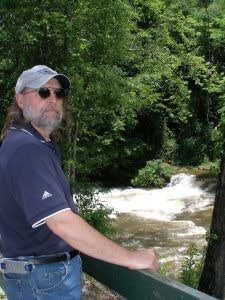 Today, I have the honour of being visited by Paul Bennett, who not only maintains an excellent review site, Hoover Book Reviews, but also writes books about set in the Americas during the decades leading up to the War of Independence. An interesting and not so often depicted period, IMO, which is why I felt it important to highlight Paul’s writing. It is also a complicated period to depict, with global alliances affecting the events on North American soil which is why I am so grateful to Paul for writing this guest post and shedding some light on this whole mess.
**************************
The mid-18th century was a time of turmoil and change in colonial America. The British colonies, being hemmed in between the Atlantic Ocean and the Appalachian Mountains sought to expand their territories west of the mountains that run from Maine in the north to Georgia in the south, despite the fact that there were already many native tribes living or hunting in these lands. Many of the tribes were being pushed further and further west; a movement that exacerbated the already volatile situation existing between traditional enemies. The Iroquois Confederacy, a powerful collection of tribes were in almost constant conflict with the Huron, Shawnee and Delaware tribes being displaced by British settlers. Despite this, the lure of fertile farmland and the lucrative fur trade were too promising to pass up and soon there were settlements dotting the landscape in what is now central and western Pennsylvania and upstate New York.
The French, meanwhile, were also laying claim to the western frontier, but not with an aim to colonize. Rather it was the major waterways, and consequently the fur trade that they sought to control with a string of forts and trading posts that stretched from Montreal to St. Louis following the St. Lawrence River through to the great lakes surrounding Michigan. They also constructed Fort Duquesne (modern day Pittsburgh) thereby controlling the Ohio River and the wealth derived from the abundance of fur bearing critters. In June of 1749 a French patrol was sent into the disputed area around the Ohio bearing to bury lead plates emblazoned with the royal French crest, thereby claiming the land for France. The patrol’s other missions were to round up and remove any English hunters and trappers they encountered, and to further ally themselves with the Indians in the area.

In 1754, Virginia colony dispatched a party of Virginia Militia to investigate French activity around the Fort Duquesne area led by Lieutenant Colonel George Washington. He had learned from a Seneca Chief, Tanaghrisson, that thirty-five French troops were camped in a nearby ravine. Washington decided to investigate; while his troops surrounded the unguarded camp, a shot was fired. The plan to talk to the French quickly became an inadvertent but deadly ambush. This ‘shot heard round the world’ resulted in a massacre that saw French commander Jumonville dead, along with 10 of his troops.
Many of the French were captured; however, at least one French soldier escaped, and made his way back to Fort Duquesne to report the incident. Washington, knowing that a reprisal was coming, returned to his base camp to strengthen the recently constructed Fort Necessity.
On the third of July, six hundred French – accompanied by one hundred Indian allies – began their assault against Washington and his 293 men. Faced with these odds, a truce was called which led to Washington surrendering Fort Necessity to the French. While war between England and France was not officially declared for another two years, these events initiated what could be called the real first world war, which engaged the governments and people of most of Europe, eastern Canada, and the British colonies in America. The French and Indian War raged from 1756-1763 and was known as The Seven Years’ War in Europe.

The strategy for the British was to seize control of the French forts, the first to be attempted was Fort Duquesne. The Battle of the Wilderness was a thoroughly humiliating defeat at the hands of an outnumbered and outgunned French and Indian force. The expedition was led by General John Braddock and included such illustrious personages as Colonel Thomas Gage, who later became one of the British commanders in the early goings of the Revolutionary War; George Washington, who had resigned his commission after the Fort Necessity debacle and was with Braddock only as an advisor; and a young Daniel Boone, a teamster and hunter for the army.
After Braddock’s defeat, the British government went all in on defeating the French, calling upon King George’s Hessian cousins to take care of Europe thereby freeing up men, material, and money for the North American effort. The French could not match the British and gradually, fort by fort, they were defeated; losing not only the Ohio River area but all holdings in North America except for the southern Mississippi posts.
This change in governance was a drastic change in fortune for the various tribes. Those who were French allies had grown accustomed to the largesse of the French in terms of gifts and trade. However, the British governor, Jeffrey Amherst, was not as generous. Even the tribes who sided with the British would soon feel colonials breathing down their necks as more and more settled across the mountains. A tribal confederation under the leadership of the Odawa chief, Pontiac laid siege to Fort Detroit, beginning a short lived rebellion that wreaked havoc on new settlements and small outposts.
In conclusion, Britain defeated the French, gaining Canada and the promising Ohio frontier, but victory would not come cheap. The British government soon determined to levy the American colonies, to help pay the costs of the war. The cries of ‘no taxation without representation’ and ‘give me liberty or give me death’ were responses to this decision, which fed the flames of rebellion, leading to the birth of the country twenty years later on July 4, 1776. 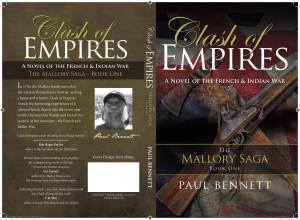 It is in this historical setting that I chose to place my fictional family and thus began Clash of Empires the first book of The Mallory Saga. With the hope and promise of a new life, the Mallory clan move to the frontier establishing a trading post at the junction of the Kiskiminetas and Allegheny Rivers, a mere 40 miles from Fort Duquesne. When war is finally declared, the Mallory’s are caught up in the ensuing struggle, serving as militia scouts for the British. Book 2 of The Mallory Saga, Paths to Freedom, follows the exploits of the family as events unfold leading to the Battle of Lexington and Concord; thus starting The American Revolution.
Available on Kindle, paperback.
https://www.amazon.com/dp/B01MXR186R
https://www.amazon.co.uk/dp/B01MXR186R
Goodreads link:
https://www.goodreads.com/work/editions/53828699-clash-of-empires-a-novel-of-the-french-indian-war-the-mallory-saga-1
Facebook Page:
https://www.facebook.com/Clash-of-Empires-1115407281808508/

3 thoughts on “How expansive ambitions led to revolution”