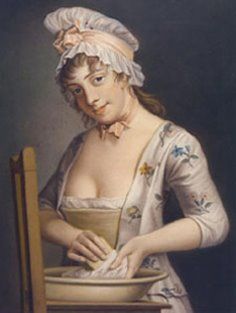 Laundry days, peeps! Woo hoo, time to undress and cavort in the shallows, looking rosy and warm and quite, quite desirable. To judge from various historical depictions of young girls doing the laundry, men did find them desirable – maybe they smelled nice and clean, like. 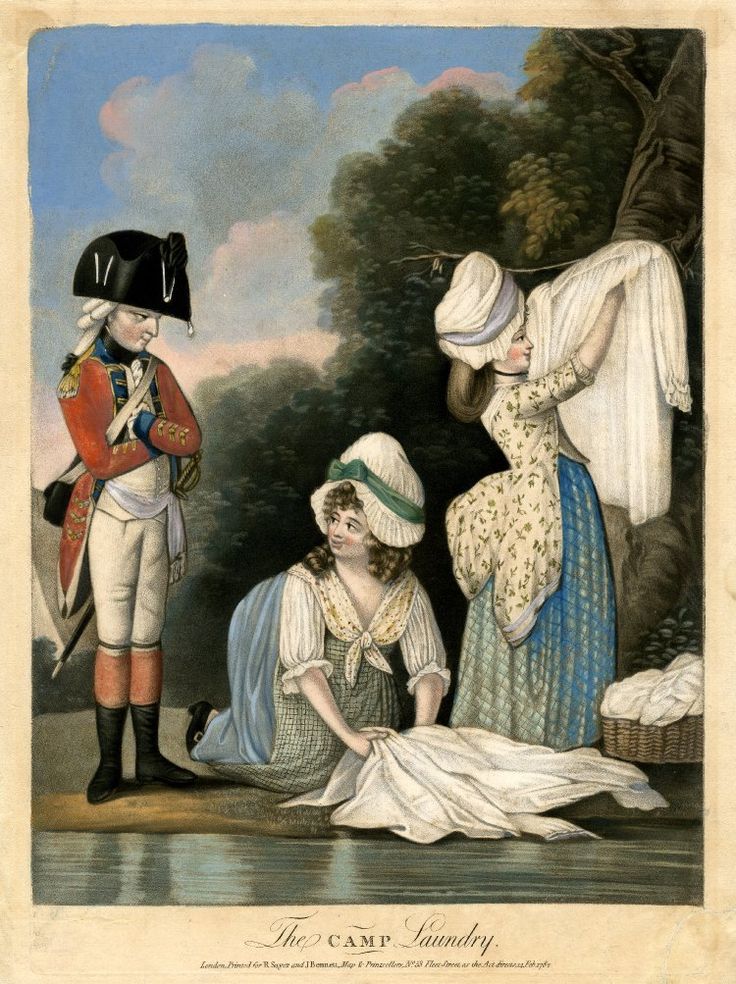 Despite all these depictions of blushing laundresses, doing the laundry was no fun. It was hard, hard work involving a lot of water and stinging lye soap. Obviously, the well-to-do did not do their own laundry. They paid someone else to do it for them, and usually these someone elses were women, engaged in one of the few occupations that women have always been allowed to do to earn their living. I’d hazard doing laundry is almost as ancient a profession as whoring, and at times the clients had a tendency of mixing up these two trades, so that young and pretty laundry maids could find themselves in compromising situations. 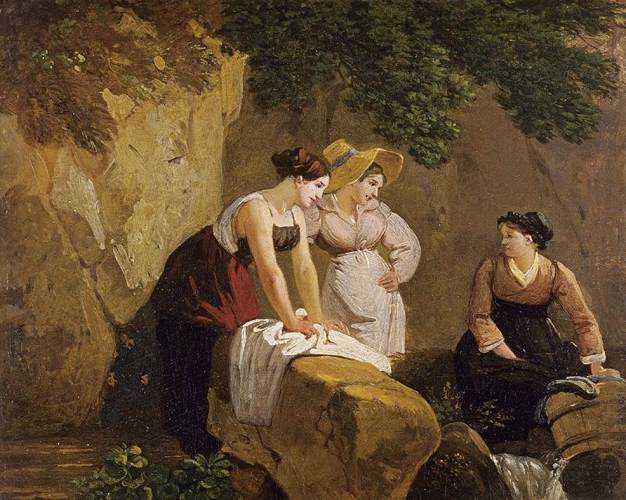 Anyway: the thing about laundry back then (which is not that long ago, a hundred years, give or take) was that it took time – and a lot of muscle. Usually, households saved up their laundry. In cold countries such as Sweden, washing anything but the absolute necessities was difficult during winter when lakes and rivers froze. Accordingly, no sooner was the blackbird warbling in the shrubs but all the dirty laundry that had been stockpiled over winter was dragged out of wherever it was kept and set to soak. In some cases, it was soaked in urine as this helped bleach yellowing and greying linen.
The soaking stage was called “bucking” and would take at least one full day. In some places, the linen was first soaked in water (or urine), then in a mixture of lye and water, then in water again before being transferred to the next stage. This is when our pretty laundresses had to start working those arms of theirs. Usually, the soaked linen was scrubbed with lye soap, both on the outside and the inside. Wham, wham, wham went the washing bats, ensuring a good work out of the biceps in at least one arm. 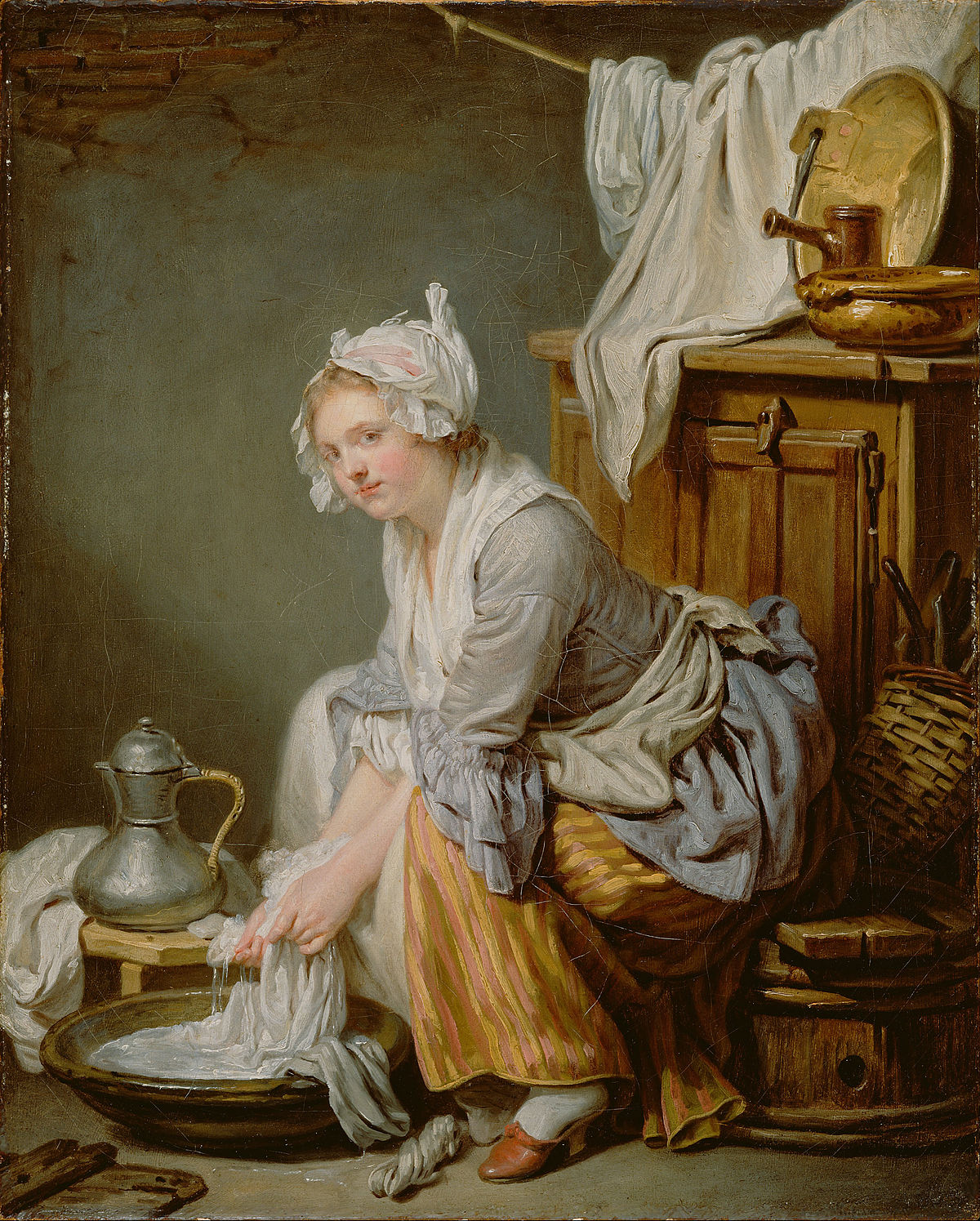 Once scrubbed, beaten, scrubbed and beaten some more, the garments were boiled. This took some time and involved a lot of heavy stirring. By now, of course, the arms and backs of our laundresses were beginning to ache – a lot. (And speaking from my own experience, it is hard work to boil f.ex. sheets) Once the garments had been boiled for long enough, they were lifted out of the cauldron, the released steam causing the hair of all those little laundresses to curl most enticingly. (In the pictures. In reality, it covered their faces with a sweaty sheen, dampened the clouts with which they covered their hair and had their clothes sticking most uncomfortably to their skin.) 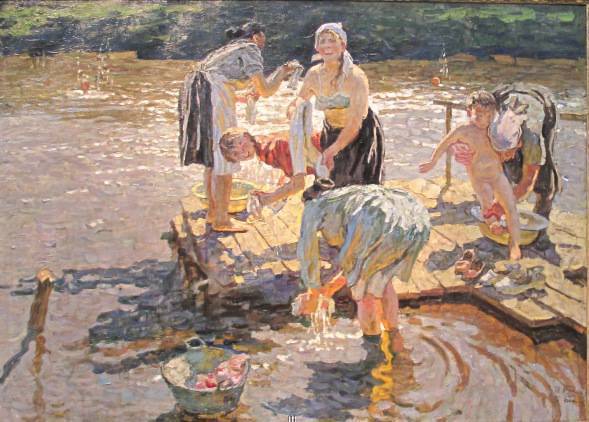 The steaming laundry was then rinsed. Quite often, this was done in the closest river. Up here in the north, this meant the water was horribly cold, and as each garment had to be thoroughly rinsed, the laundresses ended up with numbed and chapped hands. Very chapped. Rarely shows up in all those paintings…
It wasn’t only the cold water that caused discomfort. Burns were common while tending to the cauldron, and then, of course, there was the lye. The correct name for lye is sodium hydroxide – it suffices to hear that name to understand lye is a) complicated stuff from a chemical perspective b) potentially dangerous. Spilled lye caused burns – very painful ones. Should you be unlucky and get it in your eyes, chances were you’d end up blind. Should you be even more unlucky and sort of end up falling over into the lye container, you’d likely die. (And for a graphic description of just what can happen with lye, I recommend Dina’s Book by Herbjörg Wassmo. 19th century Gothic drama set in Norway…) 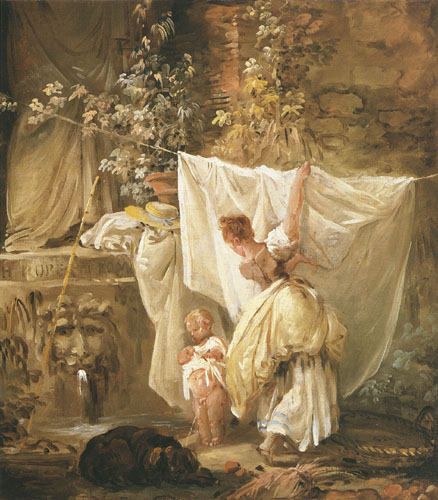 Anyway: assuming our laundresses had survived the lye and the water, had avoided falling into the river to drown, at the end of a long, long day they had heaps and heaps of clean linen to hang on lines or spread on shrubs or on the grass to dry. And as I am of the firm opinion we have more in common with our ancestors than we think, I bet those distant laundresses did what I do as they folded the sheets: they sniffed them, smiling at how they smelled of sun and wind and rustling grass. Or maybe they were just too tired to do so. I hope not.
I suppose that what this post brings home is just how lucky we are to live in a day and age where the washing process consists of sorting clothes, stuffing them in the washing machine, adding detergent, selecting a programme and pressing ON. We don’t have to carry bucket after bucket of water to fill the cauldron. We don’t have to stand with our arms in urine as we stir the soaking linen. We don’t have to make lye, we don’t have to whack the washing, scrub it, scrub it some more. No boiling, no endless rinsing in icy water. No crying at the end of the day because our nails are blue and ache so, so much. 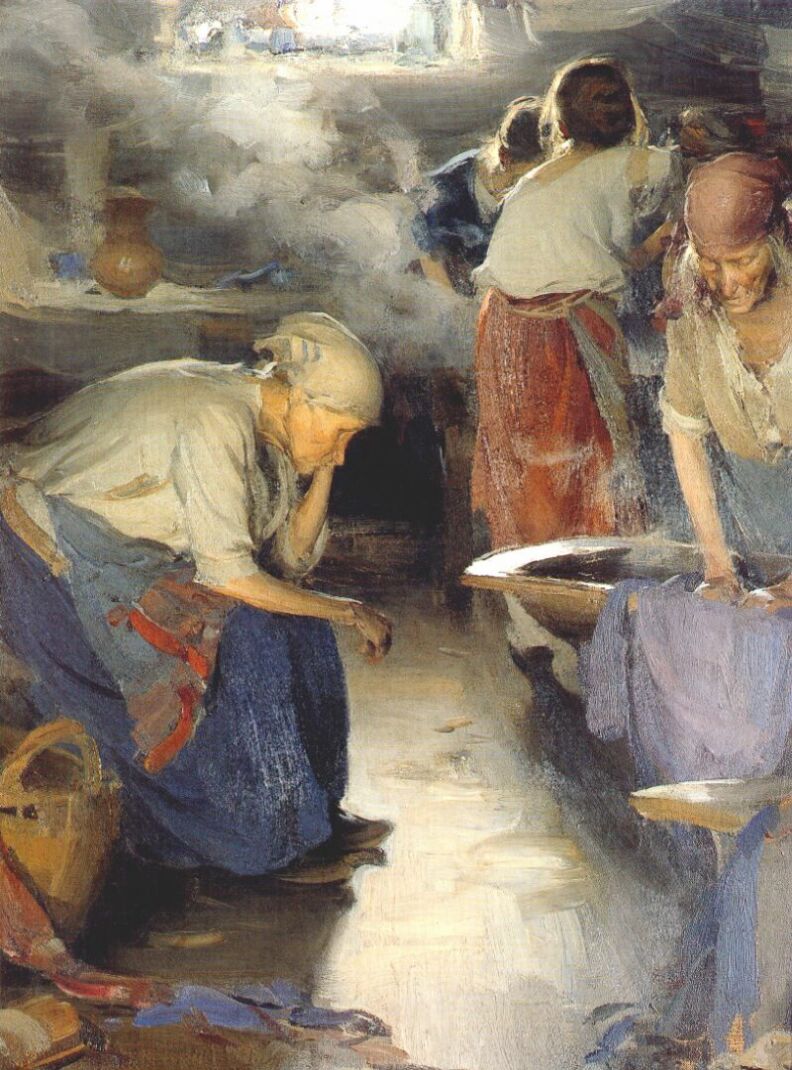 Once the laundry was done, our weary laundresses had other chores to do. Cows had to be milked, food had to be cooked, bread had to be baked, clothes had to be mended. For those with a fancy streak, all that newly washed linen also had to be ironed, collars and cuffs starched into perfection. A lot of hard work was involved in keeping your clothes clean, so maybe it’s no wonder people wore their garments for as long as they could before adding them to the “to wash” pile. Especially if you were a woman…
These days, we change clothes on a daily basis. Where our grandmothers aired their clothes, gave them a good brush-down and then wore them for some days more, we wrinkle our nose at the thought of well-worn clothes (with the exception of jeans. Maybe) We have the luxury to do so, thanks to that wonderful, wonderful invention, the washing machine. To paraphrase Maurice Chevalier: “Thank heavens for washing machines, without them what would modern peeps do?”

8 thoughts on “Ode to the Washing Machine”