This is a post I wrote some years ago, but seeing as St Lucia’s day is an annually recurring event, I’ve decided to review, rewrite somewhat and republish ….taa-daa….today, seeing as it is December 13. Again.
For most Swedish people, Christmas sort of starts on December 13.  Today we celebrate St Lucia’s day, and I would argue that for very many Swedes, this day comes in top three under the category “traditional feast days”. Why? Because of the light. St Lucia is celebrated when winter is at its darkest. Eight days to go until the midwinter solstice, until the year finally turns. Prior to switching to the Gregorian calendar December 13 WAS in actual fact the shortest day of the year.
Anyway: this time of the year, we rise in darkness, we prepare breakfast in darkness, we drop our children off at school in darkness, we arrive at work in darkness. There is a glimmer of daylight from mid-morning until mid-afternoon, but by four (at the latest) we are back in darkness. Christmas comes as a necessary break in all this black, allowing us to light candles and huddle round the gasping little flames.
And then there’s St Lucia. 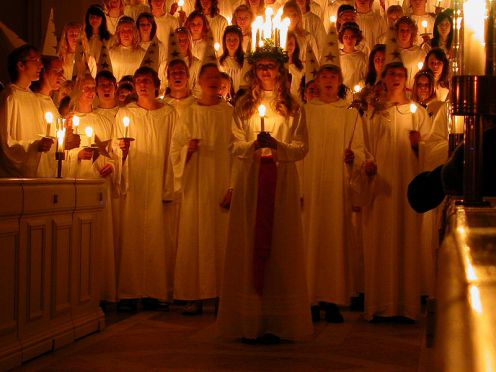 This is the day when Swedish children don long white nightshirts, the girls use red ribbons or lengths of tinsel to belt the shapeless garments, the boys don’t. Instead, the boys wear white conical hats, decorated with golden stars, and in their hands they carry rods to which a big golden star has been affixed. These are the “star boys”. Most of the girls carry a lit candle in their hand, and one lucky girl carries a crown of lit candles on her head – she is the Lucia. From personal experience, I can tell you it hurts when the hot candlewax drips onto your scalp, and still most Swedish girls desire to carry that flaming headgear at least once in their lives.
So, dressed in white, carrying candles and stars, the children form into processions and start to sing. Songs about how Lucia will drive away the dark, how in the darkest hour of midwinter a Holy Child was born. Songs about believing that one day, soon, the light will return to earth. Most apt, let me tell you. 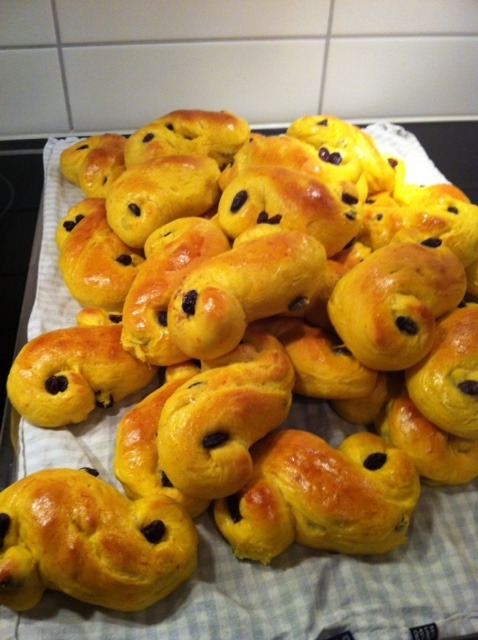 In general, the Lucia festivities take place around seven o’clock in the morning. Proud parents, younger siblings and other relatives sit in the darkened rooms, whispering to each other. There is a smell of newly brewed coffee, of gingerbread biscuits and the traditional Luciabuns, bright yellow with saffron and studded with raisins.
From the corridor comes the sound of shuffling feet, of suppressed giggles, and then, at last, young voices break out in song. The Lucia enters – slowly, given her candles – and her handmaidens follow while the star boys come in last. The gloom of the room is lit by this procession of light, and in their benches people smile and nod (mothers wipe their eyes. Mothers do that a lot when their kids perform), most of them mouthing along with the songs. 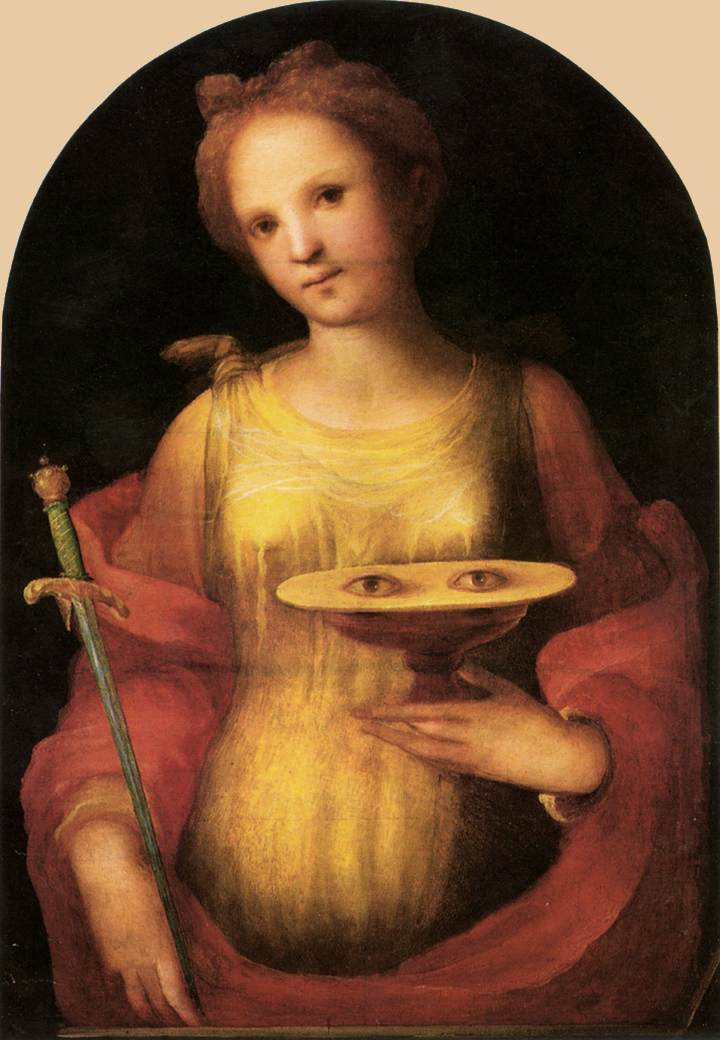 So why St Lucia? Why is a Sicilian saint so revered in  country she definitely never visited or even had heard about? It’s all about the eyes, people. For those that don’t know, St Lucia was a young, very pious woman, a firm adherent to the newfangled Christian church. It might strike us as odd to reflect on the fact that there was a time when Christianity was considered nothing but a weird sect – very weird, what with this propensity to meekly accept the tribulations of life on earth while aspiring to come to heaven after death.
I dare say St Lucia’s widowed mother tore at her hair and moaned in desperation when her adolescent and impressionable daughter wanted to consecrate her virginity to the Christian church, deciding to give away her dowry to the poor. Not at all what St Lucia’s ailing mother wanted for her pretty daughter, and so she arranged a marriage with a young man from a wealthy – but pagan – family.
Contracts were signed, and the prospective bridegroom rubbed his hands with glee at the thought of increasing his considerable fortune with Lucia’s sizeable dowry. Lucia was less than thrilled, and managed to convince her mother to go to the nearby shrine of St Agatha and pray. While there, Lucia prayed for her mother’s recovery, and miraculously the chronic illness was cured (well, that is what normally happens at the shrines of saints, right?) Lucia was happy, her mother was happy, and Lucia succeeded in convincing her mother it was best to give away her dowry to the poor – a gesture of gratitude for the mother’s miraculous cure. The poor were obviously VERY happy at being the benefactors of so much largesse. Lucia’s intended bridegroom was very unhappy – pissed off, if we’re going to be brutally honest. After all, he had a signed contract that more or less made him the owner of all those jewels now being handed out to all sort of riff-raff. 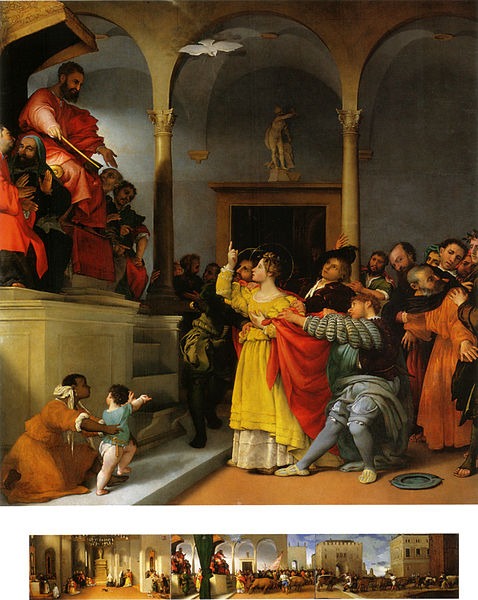 The bridegroom protested to the pagan authorities, who were most upset at discovering a subversive Christian in their midst. Lucia was dragged before the court and ordered to sacrifice to the emperor. She refused, setting that pretty mouth of hers in a stubborn line. (I’m guessing here. For a story to make it down close to 17 centuries, I bet you Lucia was quite the looker. Had she been ugly, no one would have bothered to record this story of woe – after all, some things never change…)
The pagan governor, Paschasius, waved his arms about and screamed a bit. Lucia lifted her shoulders in a resigned shrug. No matter what he threatened her with, she had no intention of sacrificing to a false god.
“False?” squeaked Paschasius, his voice floating into falsetto. “How false?”
“The emperor is a man, as fallible as you or I. There is but one God, and his son is Jesus Christ,” Lucia replied, her features acquiring a dreamy look.
This is when Paschasius pulled out all the stops, ordering his soldiers to take the young girl to a nearby brothel and there defile her. Nice guy, this Paschasius.
“You can try.” Lucia sat down on the ground. The guards heaved. The guards pushed.  The guards pulled. Little Lucia could not be budged, making one think of  “and all the king’s horses and all the king’s men,couldn’t get Humpty up again“, except, of course, that Lucia was a slender girl – a very pretty, slender girl. (Once again, I’m guessing. Maybe Lucia was a very pretty, very plump girl, nice and round, like. But generally, the heroines of these ancient stories aren’t – plump, I mean.)
The guards gave up. Paschasius grumbled a bit about having to skip the defilement part, but had his soldiers stack fire wood around the sitting girl.
“I’ll burn you alive if you don’t sacrifice to the emperor,” he said.
“Do your best,” Lucia said calmly, adjusting her hair. Tapers were brought and held to the wood. Nothing happened. Oil was poured on the wood, more tapers were brought. Nothing happened. By now, Paschasius was jumping up and down in frustration. Lucia just smiled. 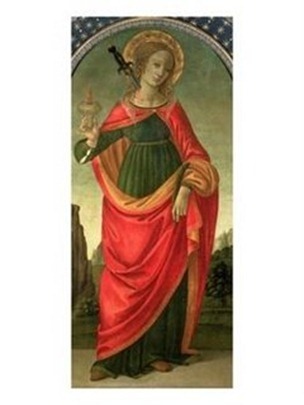 So far, the story is more or less the same throughout the ages, but sometime in the medieval times, someone decided the story needed some further spice, which is when the rather gory detail of putting Lucia’s eyes out were added. Paschasius, as per this version, seemed to think her eyes were adequate compensation for the sacrifice she refused to perform on behalf of the emperor. He was probably motivated by spite, what with not having been able to defile her OR get a nice, bright blaze burning around her. This uncooperative bonfire is also the reason why eventually Lucia was killed with a sword, blood staining her white linen dress – in both versions of the story. (And yes, this is a bit illogical: they couldn’t defile her or burn her, but kill her with a sword worked fine. As was poking her eyes out first…)
In the “let’s poke her eyes out” version, her eyes were miraculously restored to her body when her family set off to bury her – a gift from God, giving her the light of her eyesight back. The more cynical amongst us may consider this a belated gesture, what with Lucia already being dead and all that, but at least she was now buried with her beautiful eyes (blue, I think. No wait; she was Sicilian, right? A brilliant light brown, the colour of well-aged whisky). Anyway, because of this eye thing, Lucia became the patron saint of the blind, and what is more blind than man, stumbling through the eternal darkness of midwinter? Ergo, St Lucia was venerated on the day that traditionally was the darkest of the year, the midwinter solstice that as per the Julian calendar fell on December 13. Today.

I began this dark December day huddling before the TV, surrounded by lit candles as I watched the televised Lucia procession. Voices raised in song, a light that grew brighter as the Lucia approached, her handmaidens in tow. All the songs I know by heart – most Swedish people do – and once I was the Lucia, striding down a darkened church with candles like a fiery crown upon my head. Today we sing of the returning sun, of darkness that recedes as dawn grows brighter. No wonder us people of the north love our St Lucia, this harbinger of light in the pitch-black of a winter night.

As an addendum, I’d like to remind all those Swedes who walk about thinking that Lucia has to be blond and blue-eyes, that the original Lucia was neither blond nor blue-eyed. Chances are she had dark hair, dark eyes and a delicious olive tint to her skin. Just sayin’…

13 thoughts on “St Lucia: the saint who lost her eyes and found the light”