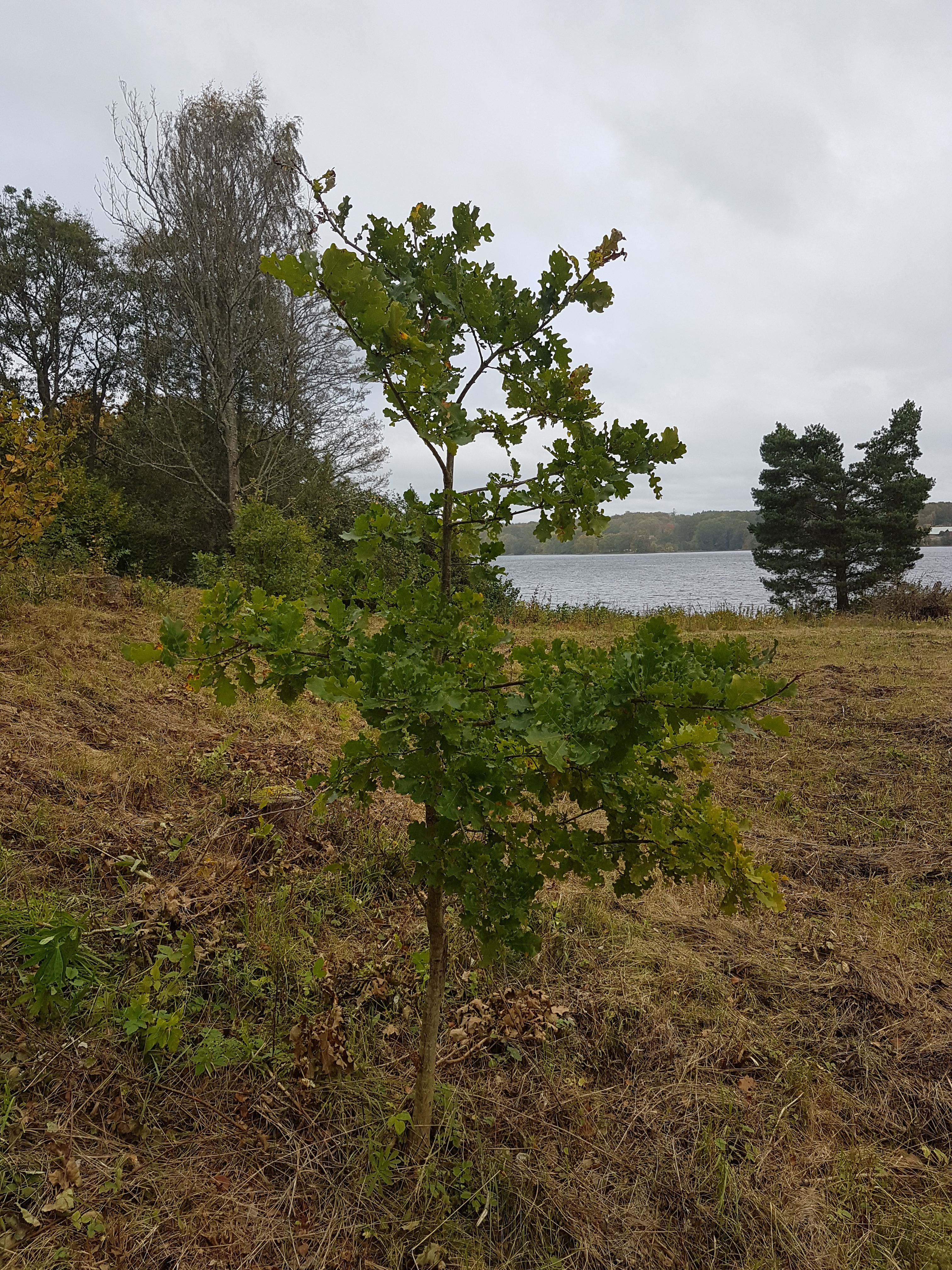 Behold a baby oak. Well, baby and baby – as per my reckoning, this thin little thing is at least 7 years old, but from the perspective of an oak, I suppose that means it is an infant.
Hubby has recently scythed the meadows, but whenever he comes across an oak sapling, he detours, saying we have a responsibility to ensure a new generation of quercus robur. It’s not as if there is a scarcity of oaks in our neck of the woods, but as hubby reminds me, they take a loooong time to grow. 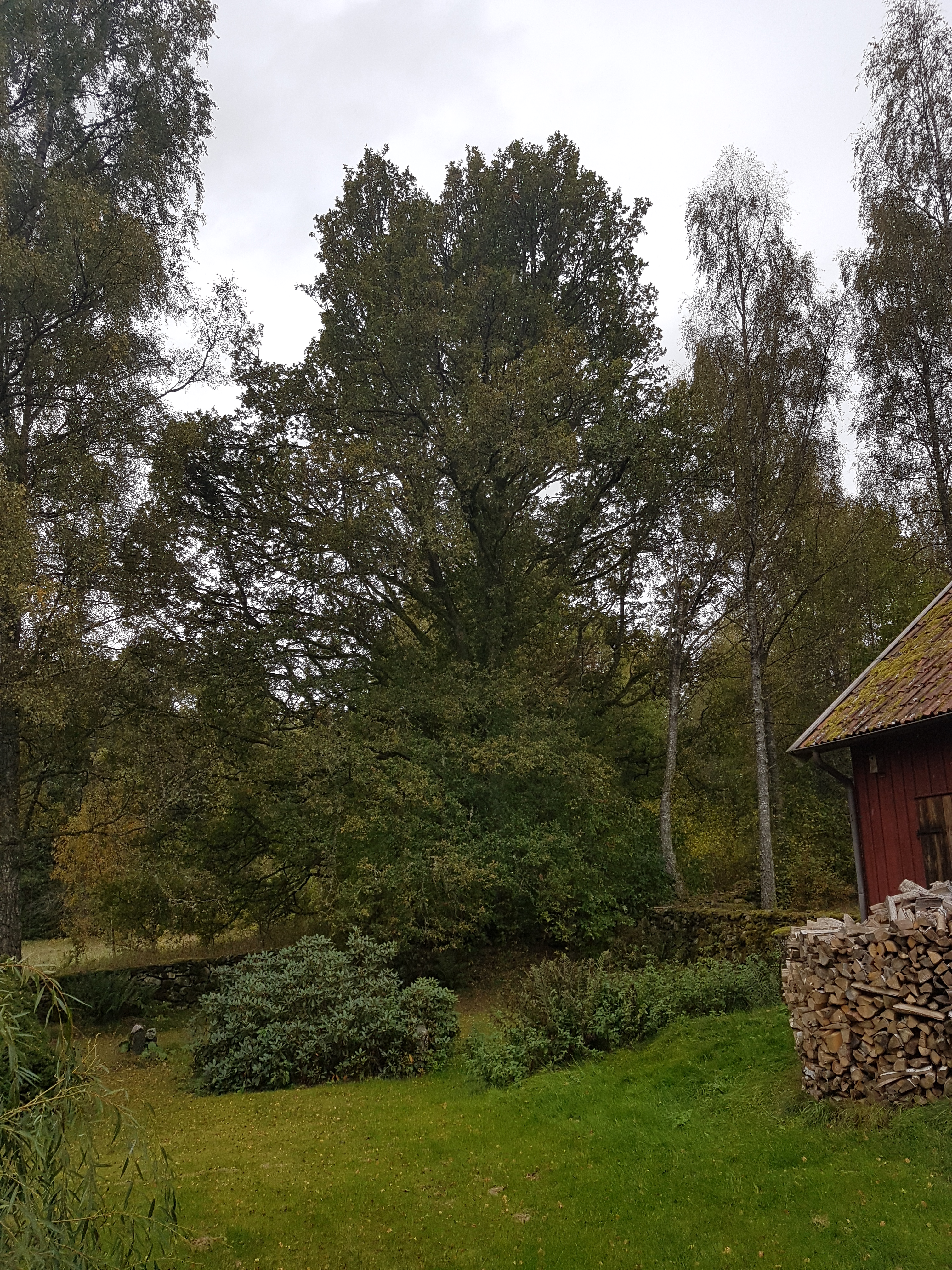 This oak is reckoned to be 300 years old. No way can I reach round the trunk. All I can do is gawk at it in awe. And climb it. This oak stands sentinel over our yard, and one day I’m going to put a rope swing in it. Well, maybe, seeing as there is this huge stone wall behind it, and I don’t want people falling off to land with a splat on the stones.
It used to be that all Swedish oaks belonged to the king. No matter where they grew, on whose land, every single oak had an invisible “for royal use only” stamp on it. Those not of royal blood were forbidden to as much as break off a twig, and any oak sapling found growing on your land had to be left alone to grow into maturity. Only with royal dispensation could an oak be taken down, and many are the writs where the king graciously has allowed yeoman this or that to take down an oak to use as posts in a new build or for a new door. Armed with such a writ, the happy recipient could essentially take down any oak that took his fancy in the neighbourhood – e.g., the tree did not have to grow on his land.
Should someone be foolish enough to poach an oak (and I imagine this would be an endeavour which is very, very difficult. It’s not as if you stuff an oak into your rucksack and skip off, humming Waltzing Matilda) the consequences were severe: for the first offence, the penalty was 40 Swedish Daler, roughly the equivalent of 1-2 full year’s wages. The second offense cost you 80 Daler, and third time round, you lost your life.

So why all this hullabaloo re an oak? Ah. The answer to that lies in Sweden’s ambitions to expand beyond its natural borders. Sweden wanted more. Sweden wanted recognition as a force to reckon with. Sweden needed a navy, and at the time, ships were built of oaks. On average, 2 000 oaks were required to build one ship. If you wanted a navy, that meant a lot of oaks. Very, very many oaks.
Obviously, things didn’t always go according to plan. Take the proud ship Vasa, for example, built in the early 17th century. The then king, Gustav II Adolf, was a bellicose sort – he was also a self-proclaimed defender of the Protestant faith in the Thirty Years’ War. Over time, Gustav II Adolf became the figurehead of the various Protestant armies fighting the might of the Holy Roman Empire. While I have no intention to dig myself into the complexities of the Thirty Years’ War, suffice it to say that what began as a religious conflict (The Holy Roman Emperor wanting to impose Catholicism on his unruly Bavarian subjects) quickly escalated into a political conflict in which various European countries saw an opportunity to once and for all curb the power of the Hapsburg Emperors.
Neither here nor there in this post. Let us instead get back to the proud ship Vasa. This, our most famous Swedish ship ever, was built by a Dutchman named Henrik Hybertsson, and if we’re going to be picky, it wasn’t even named Vasa, it was actually named Vasen, which is Swedish for sheaf. Why a sheaf? Because it figured prominently on the Vasa dynasty’s coat of arms. Now, of course, everyone knows it as Vasa, so insisting on using its correct name will probably be a useless exercise.

Work on the Vasa began in 1625. Gustav II Adolf commissioned four ships at the same time – he was desperate for more ships to transport his troops across to the continent and also do some harrying when so needed, like when keeping the Danish king Christian IV firmly on his mat. Besides, his ongoing war with Poland had cost him quite some ships in various naval battles, and he needed them replaced. Like ASAP.
Our Dutchman Henrik was delighted at receiving an order for four ships – two larger, two smaller – and soon enough the shipyard rang with the sound of axes and hammers. Not that Henrik did much chopping, sawing or hammering himself: he was the designer, responsible for constructing a ship that would handle the seas and whatever storms may come her way.

Now Henrik was no novice – he’d been building ships since ages. But the king wanted more than your average ship with 12 cannon on one gun deck. Gustav II Adolf wanted TWO gun decks, and he wanted all of 72 cannons. Plus, he wanted the standard superstructures, which allowed for firing platforms from which to shoot down at your enemies. A (not so) lean, mean killing machine powered by sails. Gustav II Adolf likely salivated at the thought.
At the time, ships with two gun decks were still very rare. The technology was unproven, and the trade-off between more guns and less stability was as yet not fully understood. Not that it mattered: what the king wanted, the king would get, and so Henrik began working on the initial design sometime in 1625. These were presented to the king who reviewed and approved them. With the project having been given a royal go-ahead, oaks were ordered to be cut down en masse. Sails were ordered from France, rigging and hemp rope from Holland.
In 1627, Henrik died, and the responsibility for the half-finished ship passed to yet another Dutch Henrik, this time with the patronym Jacobson. Things progressed more or less as planned, and in 1628, it was time for the first stability test. Thirty soldiers in full kit were to run back and forth over the deck under the eagle eye of Klas Fleming, the Vice Admiral. The purpose of the test was to set the ship rolling, and see how she handled the motion. After only three test runs, Fleming aborted the tests, fearing she was about to capsize. I imagine him groping for a huge handkerchief and mopping his sweaty brow, all the while debating just how – or if – to tell the king this ship of his was dangerously unstable.

There is nothing to indicate Fleming ever informed his king about the result of the stability tests. Instead,  Gustav II Adolf kept on sending letter after letter asking about his ship. He ordered it to be lavishly decorated, he asked about the cannon, of which 64 had now been delivered. Despite certain misgivings, the work went ahead, and in August of 1628, the ship was ready. Crowds assembled to watch this huge construction set off on its first journey. The crew was allowed to take their family with them on the first short leg of the journey, and in general it was all very festive. Flags snapped in the wind, there was beer, there was food, it was sunny if windy, and at long last the ship glided away from the pier.
For the first few hundred metres, the ship was towed, but once on open water, she unfurled her sails. The cannon ports were opened, and a massive salute was fired, causing people to cheer and clap their hands over their ears. Behold the might of Sweden, this huge impressive warship decorated in gold and red and blue, with three masts and all those cannon snouts poking from the open ports. 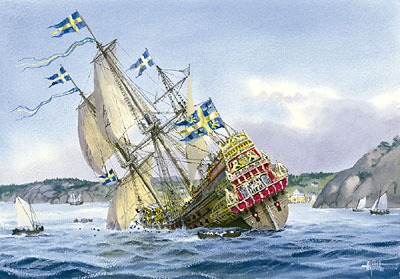 A sudden gust of wind had the ship heeling to port. She righted herself ponderously. Yet another gust of wind, and she tilted heavily to the left – so heavily that water gushed in through the open cannon ports. In a matter of minutes, the ship sank, settling on the seabed 32 metres below. Thirty or so people died, most of them trapped inside. The top of the masts stuck up over the surface, with survivors holding on for dear life, and from all over, small craft came to the rescue, dragging half-drowned sailors out of the water. And so, dear readers, ended the glorious career of the Vasa – like ten minutes after it started.

Well, there you have it: She sailed, she sank, and thanks to that disaster, we have an almost perfectly preserved 17th century ship to gawk at in the Vasa museum – a ship made of oak (as is the museum itself). With Vasa, an equivalent of 2000 royal oaks or so sank into the deep. Fortunately, those Swedish kings of the past were wise enough to plant new oaks to replace those they’d used, ensuring a continuous supply of oaks well into our times. Not that we use oaks for warships anymore – we use steel. Instead, those oaks planted by our kings as late as in the early 19th century or so, have now grown into magnificent forests, like this one on Visingsö. A sea of oaks, where the wind rustles through leaves that are vivid light green in spring, shifting through dark green to a faded, yellowing hue in autumn.
“A beautiful tree,” hubby says, patting the bark of our biggest oak. Yes, because these days it is ours. The king no longer owns every single oak in Sweden – a sure sign of progress, right?  The oaks, of course, couldn’t care less who owns them. They live out their long, long lives, from acorn to rotting trunk, in one place, their branches spreading protectively over the ground beneath them.  But hubby is right: it’s a beautiful, beautiful tree.

2 thoughts on “Of royal oaks and sinking ships”