Okay, I’m going to come clean: I am NOT a major Tudor fan. I’ve had it up to here (waves hand around eye level) with novels featuring Henry VIII and Anne Boleyn. Likewise with Elizabeth I – undoubtedly an intriguing lady – maybe not so much with Mary Tudor. Which is why I surprised myself when I bought a book about Owen Tudor – but hey, all I knew about this particular Tudor was that he’d seduced Henry V’s widow  and that this happened like 100 years before Henry VIII’s heyday. Turns out I enjoyed the book, which is why I’ve invited the author, Tony Riches, to pop by. 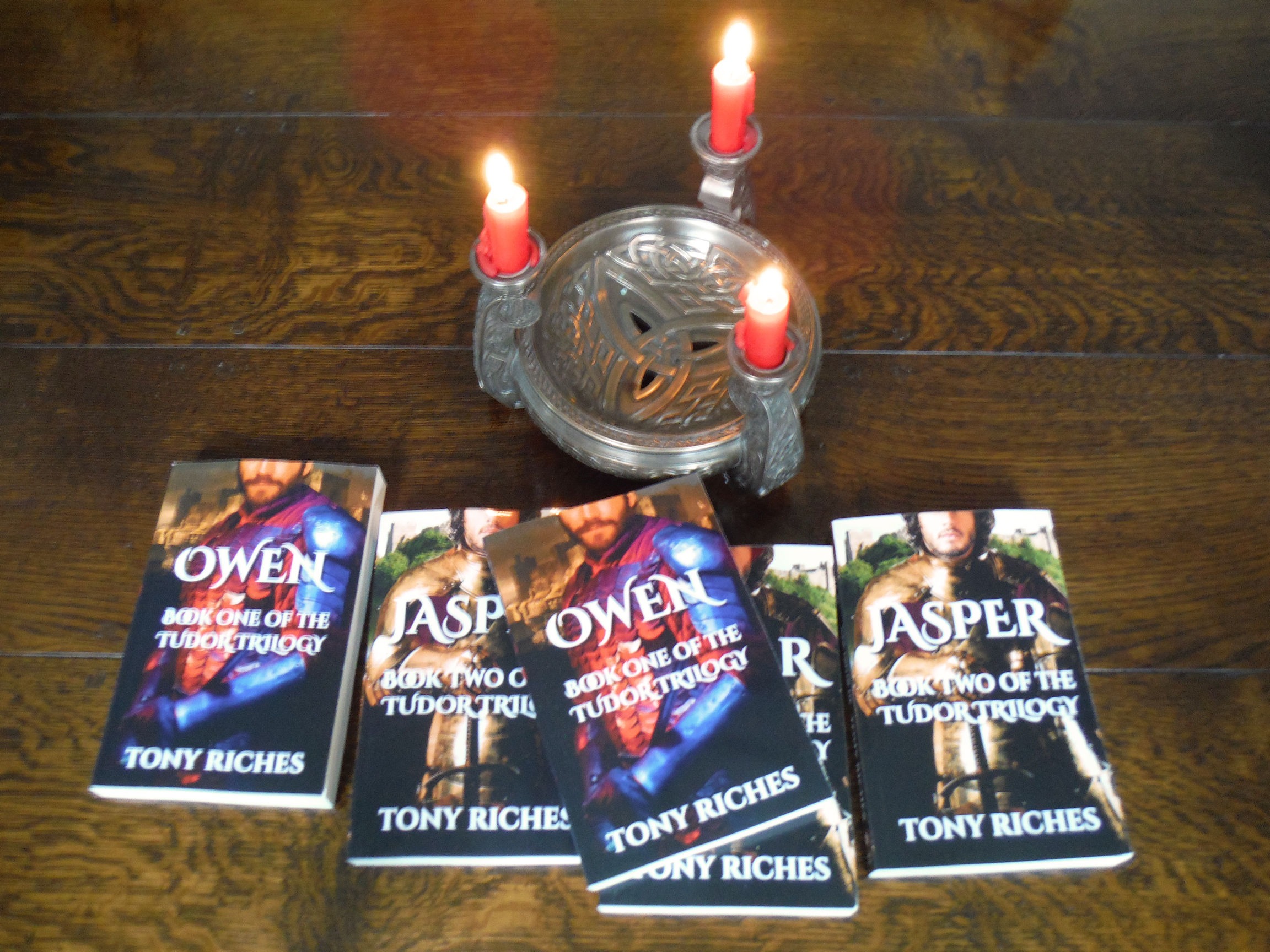 Welcome to my blog, Tony! By now, I have read quite a few of your books, and I recently enjoyed (yes, to my surprise – see above) both Owen and Jasper, the first two books in your Tudor trilogy. Why this fascination with the early Tudors?
Hi Anna – and thank you for inviting me to your blog. I was born within sight of Pembroke Castle, birthplace of Henry Tudor, so was naturally intrigued by how Henry became King of England. Surprised to find there were no books about Owen Tudor, the Welsh servant who married the widow of King Henry V, I began researching his life and discovered the fascinating story of how the Tudor dynasty began. I soon had more than enough material for a book and decided to write the trilogy, with Henry being born in the first book, coming of age in the second and becoming king in the third.
In Owen, you present Catherine of Valois as being prone to depression, if not full-blown mental instability. Tell us a bit about this – did your research lead you to conclude she was somewhat frail, or is this a case of “filling in the blanks”?
Although there is no direct evidence of Catherine’s ‘instability’ it’s recorded that her father, Charles VI of France, suffered from delusions, such as the belief he was made of glass. He began violently attacking his servants and had to be locked up for his own safety. Catherine’s son Henry VI also suffered from ’lapses’ and is reported as falling into some form of depressive catatonic state. Importantly, both her father and her son sometimes failed to recognise their own family and, as the link between them, Queen Catherine must have feared for her own mental health. She became a recluse at Bermondsey Abbey after Owen was arrested and her sons taken from her, so it was easy to imagine how this might have caused tension in her relationship with Owen Tudor.
In Jasper, Henry VI is already showing clear signs of retiring mentally from the world, leaving his forceful wife to cope on her own. Do you think there were ever discussions among the Lancastrians to depose him?
Yes – he was definitely unfit to rule, so if it had not been for the protection of Queen Margaret of Anjou I’m sure he would have been ‘retired’ through ill health much earlier. It’s fascinating to wonder how history might have changed if he’d not remained on the throne…
There has been speculation regarding the paternity of Prince Edward, Henry VI’s son. What is your take on it?
The only person who knows for certain is Queen Margaret, although providing the king with a male heir transformed her status in the country. By all accounts she was an attractive and lonely young woman, so given her husband’s mental and physical state at the time the temptation to take matters into her own hands must have been overwhelming.  (Ha! A true diplomat, Mr Riches…)
You paint a very engaging picture of Jasper Tudor – a man loyal to a fault, both to his brother and his nephew. Was this your starting point when you decided to write about him?
I wanted to show Jasper as a man with plenty of weaknesses. He always seemed to run from battles to save himself, he wasn’t a great military tactician, often failed to listen to good advice and didn’t settle down and marry until he was fifty-five.  At the same time, Jasper was an easy man to like, as he always put others first. There is no question of his loyalty to Henry Tudor or his diplomatic skills, qualities which were vital for the future of the Tudor dynasty.

In Jasper, the Welsh are talked into supporting Henry Tudor because he’s Welsh and rides under the Welsh dragon. Were there benefits to the Welsh during Henry VII’s reign?
The Welsh had been subjugated, second-class citizens for centuries, not allowed to own land or even carry a sword, so it must have been compelling to believe Henry was their prophesised saviour, ‘Y Mab Darogan’, the ‘son of destiny’. There is scant evidence that Henry VII ever returned to Wales once he was king, however, although he generously rewarded those who supported him at Bosworth.
As a writer, I found it interesting to note that Owen is written in first person, present tense, while Jasper is third person, past tense. Why have you used two such different approaches?
I started writing Owen in the third person, then read Hilary Mantel’s Wolf Hall and was impressed by the sense of immediacy she achieves. I enjoyed the challenge of re-writing Owen in the first person and present tense – but Jasper was always third person in book one and I decided to continue this. I understand some readers struggle to get in to first person, present tense, although the feedback and reviews (and international sales) suggest it wasn’t an issue.
Your trilogy is to be concluded with a third book (obviously) named Henry. It seems to me the world of historical fiction readers is very polarised when it comes to Henry Tudor – what is your take on this enigmatic man?
I respected Richard III’s courage at the end of my book Jasper – and now I’m keen to present a fresh perspective on the man Henry was. He inherited a bankrupt throne and left it richer than it had ever been. He oversaw the longest period of peace for centuries, uniting families and establishing a new style of monarchy. (I’m attending the Bosworth anniversary re-enactment next month, however, and am sure the ‘Ricardians’ will take some convincing!)
What I found very interesting in Jasper was how distant you depicted the relationship between Margaret Beaufort and her son, Henry. Not so strange, really, seeing as he was raised by others than her, but somewhat at odds with the notion that she was the “power behind the throne” once he became king. What are your thoughts on Margaret and her relationship with Henry?
Margaret Beaufort was a fascinating woman, and I relied on numerous sources but was particularly impressed by Elizabeth Norton’s Margaret Beaufort: Mother of the Tudor Dynasty. The price of Henry’s long exile was that his mother would have been a complete stranger, as for many years they couldn’t exchange letters, yet she never stopped working for his return and became his most trusted advisor once he was king.
Finally, when will we be able to read Henry?
I am now working on the first draft and plan to launch Henry, Book Three of The Tudor Trilogy by Easter next year.
Thank you so much for dropping by, Tony – and for giving me a new perspective on the Tudors!
***************************** 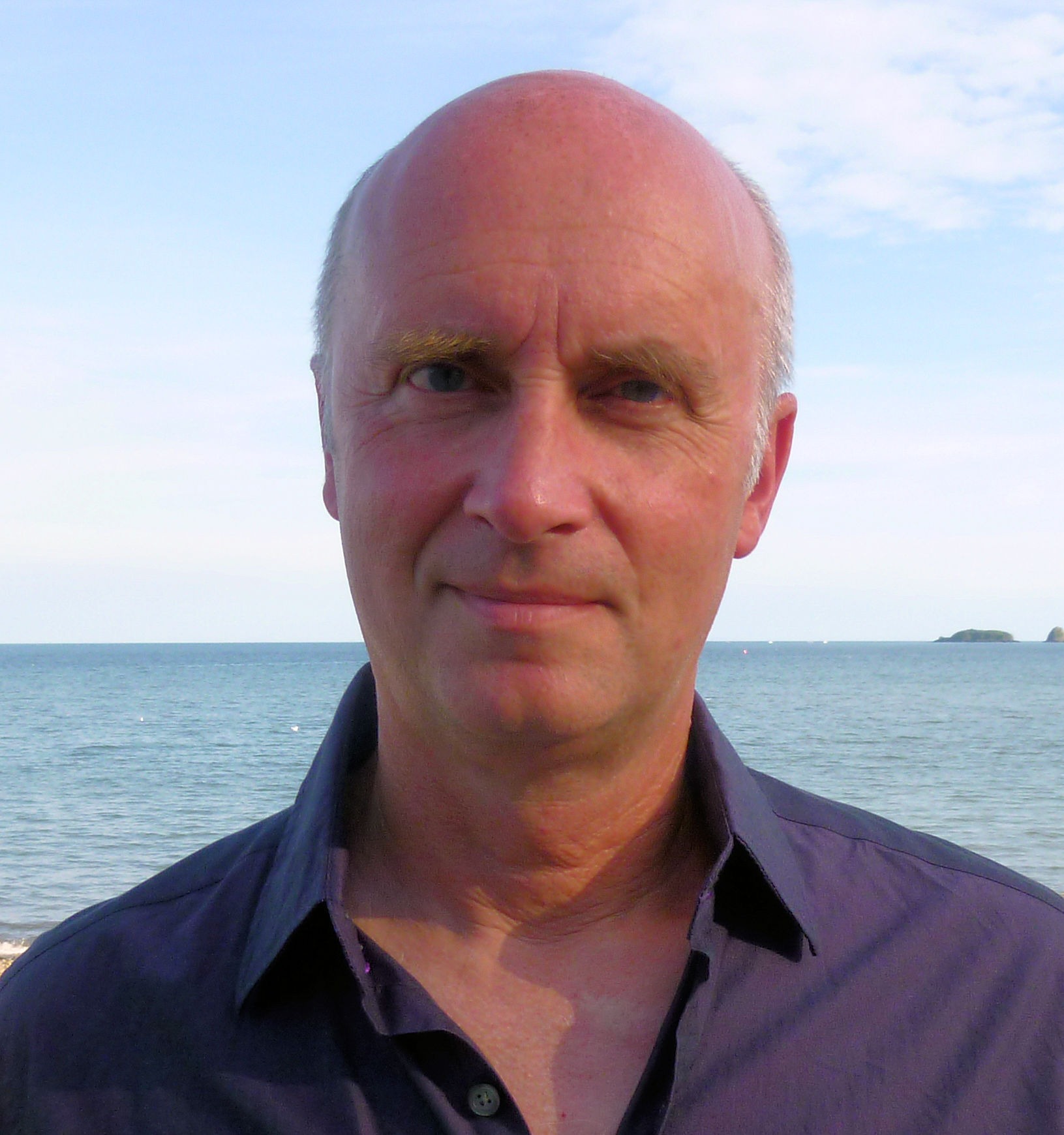 Tony Riches lives with his wife in Pembrokeshire, West Wales and is a specialist in the history of the fifteenth century, with a particular interest in the Wars of the Roses and the lives of the early Tudors. For more information about Tony’s books please visit his popular blog, The Writing Desk and his WordPress website and find him on Facebook and Twitter @tonyriches.

2 thoughts on “Digging up the Tudor roots”