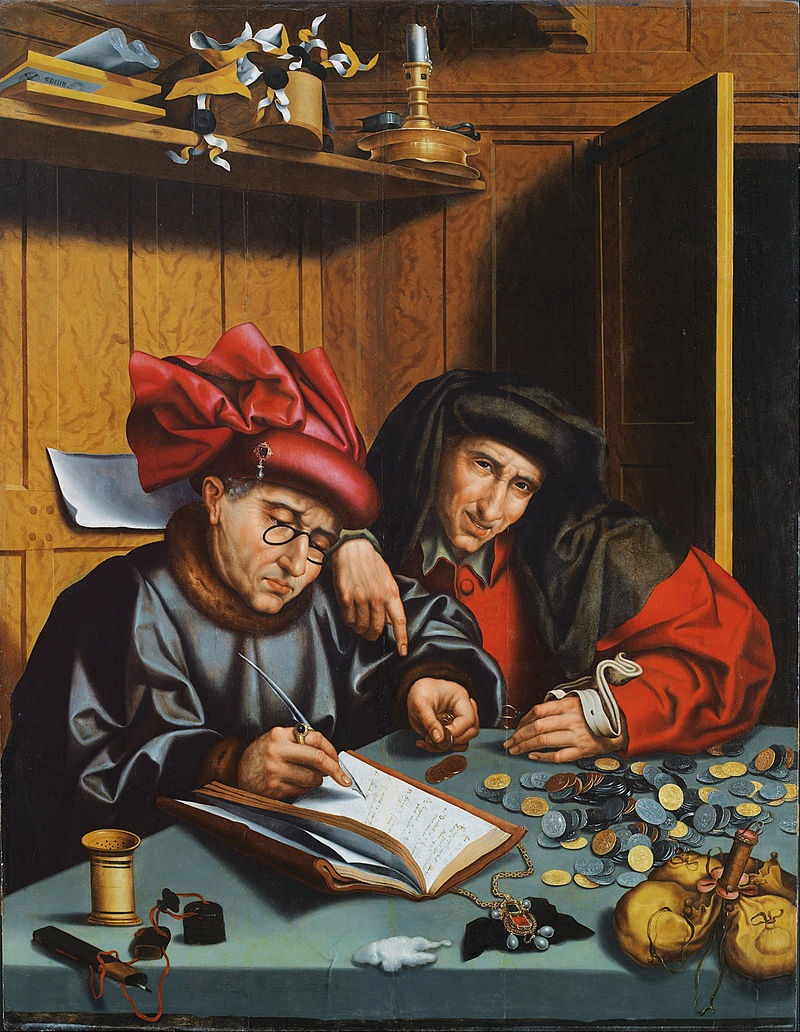 Hands up all of those who think accounting is an absolutely riveting subject. No; I thought not. Accountants, together with prostitutes, are said to represent the two oldest professions in the world – for the obvious reason that what the prostitutes earned, the accountant had to tally up. For those of you that find accountants – and the art of accounting – rather boring, I would have you know that accounting is as much an art as writing is, and before the advent of the Italian invention, double entry book-keeping, it was even more creative than it is today. Inexact, one could say, which when describing accounting is a most unfortunate adjective to use.
When trying to conjure up an image of an accountant in historic time, it’s Mr Cratchit, the father of Tiny Tim in Dickens’ A Christmas Carol, that comes to mind. There he is, leaning over his desk, with his shirt covered by protective half-sleeves in black. With a ruler he draws up nearly invisible lines in his ledger before using ink and pen to carefully enter each transaction. As Mr Cratchit was around long after the invention of double book-keeping, each entry is of course made twice (and so as not to risk losing my audience, I will not explain the intricacies of accounting in detail).
Whatever else one might think about Mr Cratchit, an alpha male he is not. That is not necessarily due to his profession, I hasten to add. Unfortunately, rarely does one have an accountant cast as a romantic hero or heroine. Probably because romance and number-crunching don’t quite go together in popular perception.
Back in the good old days – the Middle Ages – the accounting ledgers were often the responsibility of the lady of the house. She could have a steward to handle her business and do the entries, but a well-educated woman could definitely square her own accounts and do whatever audits she found necessary. Not that one needs double-entry book-keeping to handle the household finances – my Mum used a lined pad and a pencil. The Chinese, who, if we’re going to be quite honest, were centuries ahead of Europe when it came to business and profit development, used an abacus. Many Chinese still do.

In Europe, medieval accounts were kept in rolls, long details of expenses. Unless the reader planned on ticking off every single item, line by line, it was relatively easy to sneak in a discrepancy or two. While I would argue most accountants – no matter the day and age they lived in – are honest, there are a few who aren’t, who go beyond making accounting creative to making it criminal. Such behaviour was easier to spot – and stop – once the Italians came up with their little invention: let’s enter all transactions TWICE, which means it must sum not only vertically but horizontally (a simplification), and if it doesn’t, something is wrong.
It very often was – wrong, I mean. Even today, when most accounting is done through fancy ERP systems, things end up being incorrect, which is why one needs that age-old profession – the accountant – to begin with.
So why this Italian interest in accounting? Well, it all comes down to banks.
Banking is another very ancient profession. Already in Mesopotamia there were “lending houses”, businesses that made money out of money – or rather, someone else’s lack of money. These banks became increasingly more sophisticated, the Greek did their banking thing, the Romans did theirs, and then along came the Christian Church and banking went belly-up.

Why? Because the Christian Church considered usury a sin, and if you couldn’t make money out of money-lending, why would you do it? So, for several centuries, Europe muddled along without any type of banking system – at least not formally.
Luckily for Europe, they had the Jews. In actual fact, Judaism also condemns usury, but only when dealing with other Jews. Therefore, the Jewish merchants could develop a lucrative little side-line, lending money to the Gentiles – at a cost, of course. This was yet another reason for the anti-Semitism that was as natural as drawing breath for most medieval Europeans – the dratted Jews had the effrontery of charging them a fee for lending them money! It was also the equivalent of playing with fire, because, as many Jewish moneylenders were to find out, some of their larger debtors showed great creativity – and cruelty – in devising ways to avoid repaying the money.
Take for example the York Massacre in 1190 in which the entire Jewish community in York was wiped out, very much egged on by a handful of noblemen who owed the Jews considerable amounts of money. At the time, rich Jews had been lending money right, left and centre to all the eager wannabe Crusaders – including Richard I of England. The Jews supposedly had royal protection, but it availed them little when the York mob chased them through the city, forcing the Jewish community to seek protection in the castle. None of them made it out. Surrounded by the baying mob, they chose to commit mass suicide, as the alternative – to surrender to the enraged citizenry of York – was less than palatable.
Some generations down the line, mighty Edward I financed his martial activity by taxing “his” Jews more or less to death. The Jews were the king’s personal property (!), and once he had wrung them dry of money, Edward used them for political purposes. Ultimately, in 1290 Edward expelled the Jews from England – as was happening throughout northern Europe.
This pattern was repated in one country after the other: Philip le Bel of France went after the Jews first before turning his beady eye on another organisation that offered a medieval equivalent to banking, the Templars. In Spain, the Reconquista under Isabel and Fernando caused the expulsion of all Jews in 1492, a massive exodus seeing just how large the Jewish community was in the former Moorish parts of Spain.
While monarchs everywhere could “congratulate” each other on having rid their countries of the Jews (!), they were now faced with a long-term financing issue. Yes, ousting the Jews did wonders for the royal balance sheets in the short term (they appropriated all the assets the Jews couldn’t take with them, which was often most of their estate), but as the prohibition against usury still stood, there was no one to fill the Jewish moneylenders’ shoes. 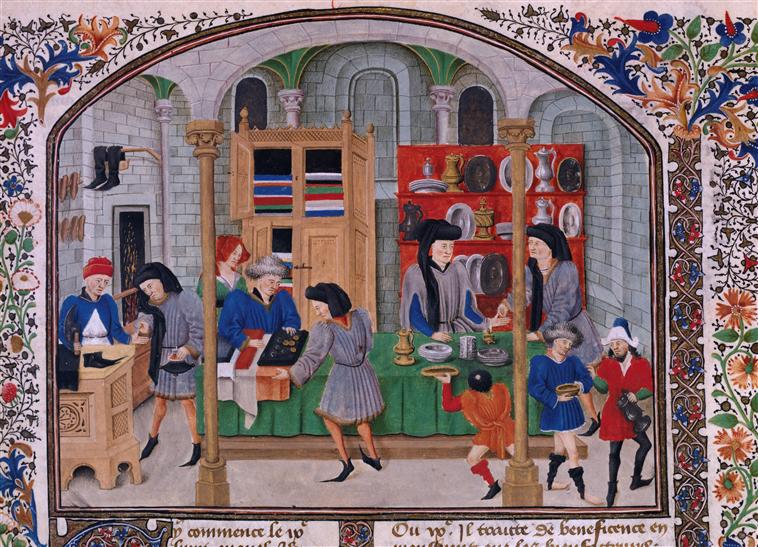 To this day, business ventures depend on risk capital to develop from mere ideas into viable enterprises. No cash, no company, no future wealth. (Which is why, as an aside, I would urge you to study the cash-flow of any company you’re planning to invest in.) Enter the Italian banks. Already back in the 12th century, Venice founded its first bank, but it wasn’t until the exiled Jews from the north of Europe made it to Italy, that banking as a business concept took off.
Originally, early European banking was a trade in grain futures. The farmer borrowed money on his growing crop, the lender thereby acquired the crop at a discounted (lower) value, and everyone was happy. Unless the crop failed – which it occasionally did. Hand in hand with lending, an insurance business arose. “If you want to borrow money, that’s fine, but I also want you to pay an insurance premium, you know, just in case you die of the plague, or the Po floods your fields, or…” A most elegant construction, whereby the lender charged no official interest. Instead, he covered his risk by the discounted value of the future crop and the cost of the insurance. 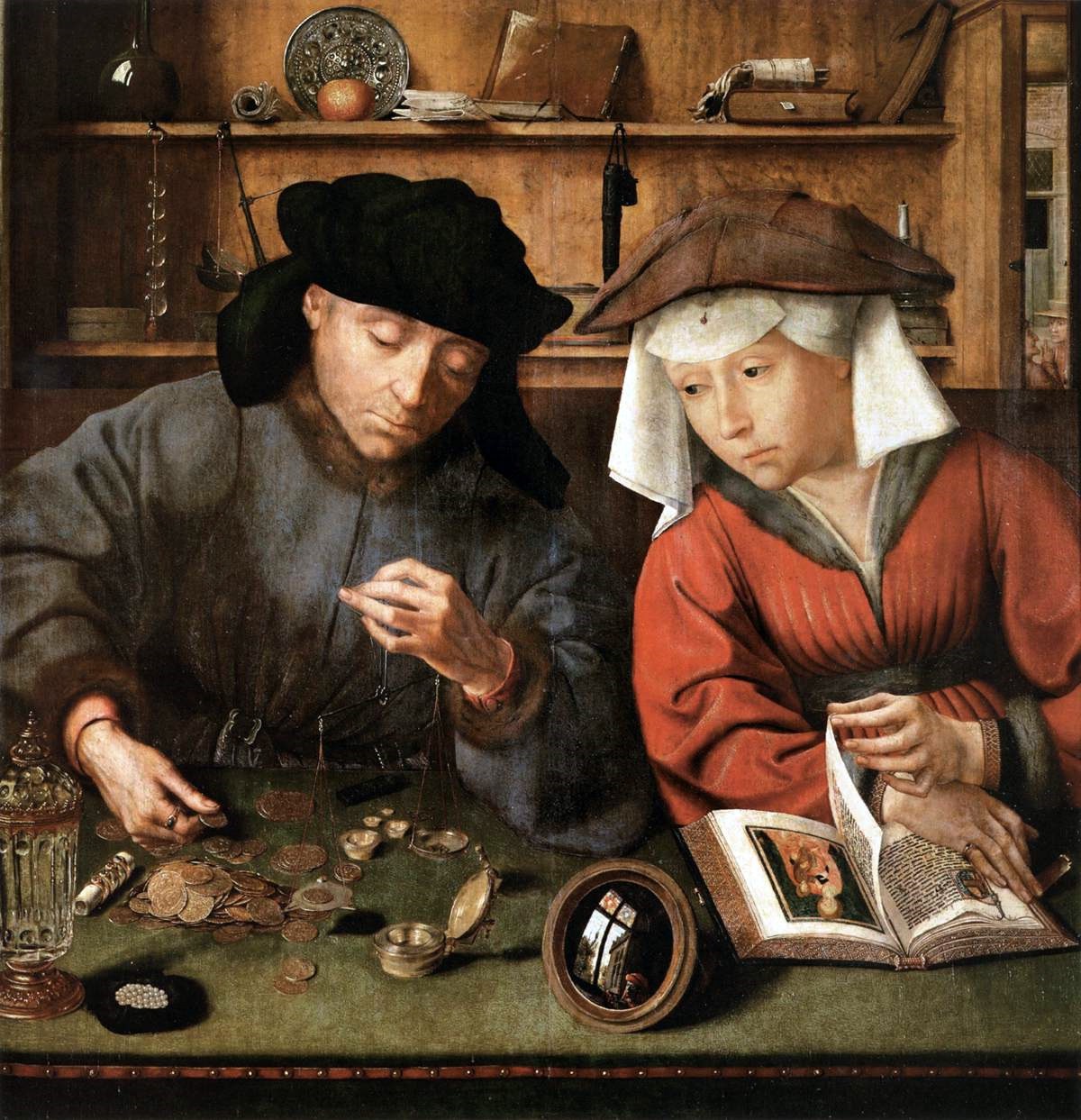 Banking at the time was an informal business, conducted at the market place. The money-lenders did their business on a bench (Italian banca, which is where the word bank comes from), and should the money-lenders default on their promises, or overextend themselves to the point of ending up in debt themselves, their bench was broken in two (Italian banca rotta, from which derives the word bankrupt).
The Italian banks became a force to be reckoned with throughout Europe. Kings, noblemen, merchants – they all lined up, cap in hand, eager to tap into this new source of money. Over time, the prohibition against usury was watered down – various Popes, eager for money, helped. Families such as the Bardi, the Mozzi, the Peruzzi and the Medici became synonym with banking, amassing not only wealth but power.

If your livelihood depended on lending other people money, you needed a fail-safe way of keeping tabs on who owed you what, when repayment was due, and what interest – oops, sorry! Insurance premium – was valid. The financial relationships were complex – in some cases the banker was both a debtor and a creditor – and unless you knew down to the last florin just how much money you had, things could very quickly go very wrong. This challenging environment resulted in the rolls becoming obsolete, and instead the late 13th century saw the birth of the double-entry book keeping.
Today, eight hundred years later, this system is still in use. What those long dead Italians invented, is what rules the world of Finance today, testament to just how excellent the system is. It has the further upside – from an accountant’s perspective – of being quite complex, ensuring that this, the oldest profession in the world, has a bright and lucrative future. But it is also this complexity which ensures most businesses adhere to the straight and narrow – being too creative in a double-entry book-keeping system has a nasty tendency to come back and bite you. Hard. Smart guys, those Italians.
And as to the Jews who brought their acumen to the nascent banking trade, many of them managed to hang on to an existence in Italy. In difference to other European states, the various Italian city-states never formally expelled their Jewish compatriots – at least not at the same time, thereby making it possible for the Italian Jewry to remain in the vicinity by the simple expedient of moving to the city-state that at present was the least anti-semitic. Yet again: smart guys, those Italians.

5 thoughts on “Following the money”