Recently, I have allowed myself to splurge – long days spent reading book after book. For once, not books I’m supposed to review, nor are they books within my preferred genre, which is (no surprise) historical fiction.
When I read for pure relaxation, I tend to read crime. Nothing relaxes me quite as much as a good murder or two – especially when in the company of detectives I know will solve the crime in question. Good wins over bad – it often does, in crime novels, and I think this is one of the reasons the genre appeals. Deep down, we all want to believe good always wins, despite overwhelming proof to the opposite.
Anyway, my summer joy this year has been re-reading Barbara Nadel’s books about Cetin Ikmen and Mehmet Suleyman, police officers in Istanbul. Ms Nadel ensures this magnificent, vibrant city is given ample room in her stories, as is the long and colourful (if at times dark) history that imbues this meeting point between east and west. (And yes, this is where my constant appetite for history is adequately fed)

I am a big fan of Istanbul. If someone offered, I’d be glad to live there for a while, preferably in Sultanahmet or Karaköy. Not, I fear, about to happen. But what has me stuck in Ms Nadel’s books (and this despite a rather irritating tendency to head-hop constantly) are her main characters. It is difficult not to love Cetin Ikmen, it is darn difficult not to fall in love with handsome brooding Mehmet – although at present I am somewhat pissed off with him, serial philanderer that he is.
Most of us who read series do so because we develop relationships with the characters. In Ms Nadel’s case, Ikmen has been gifted with a big family, a wife who loves her police husband even if she rarely agrees with him about anything. The marriage trundles along, nine children grow up, leave home, and still the marriage endures, testament to Cetin’s and Fatma’s love for one another. Mind you, some books back, it was all touch and go, with Fatma blaming Cetin for the tragic events that befell one of their children. Very heart-wrenching, that was.
In difference to Cetin, Mehmet is a lonely man – he has always been lonely, somewhat aloof, somewhat disdainful – if only to hide just how lonely he is. This is probably why Mehmet has wormed himself into my affections, why I forgive him over and over again, why I hope he will find some happiness in his hitherto rather sad life. Preferably with that flamboyant gypsy he keeps returning to…
In effect, these two Turkish gentlemen have taken on life and form. I eat what they eat, I see what they see, I experience (well) what they experience, I cry for them, I shake my head at them – and I so want to take Mehmet by the shoulders and give him a good shake (right now, that is) . I care about them, ergo the seventeen books on my Kindle – and my fondness for Turkish cuisine, which, BTW, must be one of the best cuisines in the world. 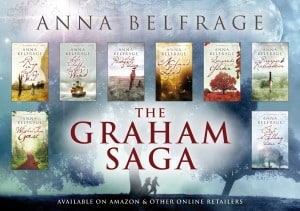 I have always loved reading series – which is probably why I’ve ended up writing series. To the great amusement of my other half, to this day there are scenes in my books at which I will say “Cad!” and scowl (in particular in relation to one very specific scene in Serpents in the Garden when Matthew…gah!).
“You wrote it,” hubby reminds me. Well excuse me, yes I did – but Matthew Graham has a very clear perception of who he is and what his values are, and he isn’t about to let this writer have too much of a voice in his character development.
Likewise, there are scenes at which I cry, which leaves hubby somewhat concerned – he’s seen me cry as I first drafted the scene, cry through the edits, cry again through the proofreads, and cry when I read the book.
“But you know it’s going to happen,” he tries, and I wipe my eyes and glare at him. I do, but I don’t WANT it to. I’m sort of hoping that next time I pick up the book, some little fairy godmother has been there and waved away the pain and hurt. Of course, if she did, it would take away a lot of what is relevant and powerful in my books – in any books – namely human emotions.
And this, of course, is one of the main reasons behind the appeal of series. Book after book with the same characters, and they develop into real people, people whose experiences affect us – deeply. We keep on hoping the flawed characters will grow up, that the good guy will never be hurt and that the bad guy gets his comeuppance, but the skillful author has presented us with human beings – and we all know just how inadequate we all can be at times, so we know that one day soon the hero will be badly hurt, or the heroine will suffer a devastating loss. They do, we cry, we cry some more, and then we read on – because the well-written series charters the course of humans who grow and hurt, mend and continue this messy, wonderful business of living.
Series allow us to invest in characters – both as readers and writers. As a writer, it amazes me just how much say my invented characters have in their own destiny – not in the factual events, as those remain firmly in my control, but in how they face up to their defining moments, how they somehow find the strength from within to continue on.
Matthew Graham, as an example, has suffered unjust incarceration, humiliating servitude and religious persecution. He could have turned out bitter and intolerant, but instead he develops into his full potential, a loving and caring husband & father, a man of convictions with a well-developed sense of right and wrong. Or maybe that is because of Alex, his headstrong time-travelling wife. Come to think of it, those two needed each other, so isn’t it lucky me as the writer came along and created that rip in the fragile veil of time? But that was all I did: I ripped the veil – the rest, they’ve done themselves, creating an interdependency that makes them so strong when they’re together, so vulnerable when they are not. As Alex reflects in the sixth book in the series, Of course she would die if she were dragged back in time – how could she survive with half of her yanked out? And he, she saw in his eyes, he would dwindle and die as well. Bit by bit, the fire in him would falter and go out, and he would float away like top soil in a drought.

So, as a writer, I will continue writing series. The next one, The King’s Greatest Enemy, is already in the works, and yet again I am swept away by how Adam and Kit go their own way – a nod and wink in my direction, no more, as they proceed to set out in search of their own destiny. I smile, juggling the imaginary dice I hold in my hand. One flick of the wrist, and the dice will roll, one way or the other. You see, Adam and Kit, just like Matthew and Alex, may well be in control over who they are, but me, their creator, will be the one that gets things moving. And in Adam’s and Kit’s case, they’re about to face adversity after adversity. But hey, that’s good for you,isn’t it? After all, without recurring challenges, how are we ever to grow?