The first song I learnt to play on the piano was America the Beautiful. So what, some of you may think, having no interest whatsoever in my musical development – but bear with me, okay?
I probably need to rephrase that first sentence: the first song I learnt to play two-handed was America the Beautiful – my first musical conquest was ”twinkle, twinkle little star”, played with one finger…
So why would a Swedish woman learn to play an American song? Probably has to do with Mrs Miller, my dragon of a piano teacher. She was also my French teacher, and there was a time when I could conjugate avoir and être in my sleep, so thoroughly did she bang these verbs into my head. Mrs Miller was a woman one did not mess with.
At the time, I thought her old like Methuselah, now I realise she was probably around fifty (gulp, gulp) and, however demanding, a great teacher. She loved French. She loved piano. She loved deportment. I loved French. I liked piano. I hated deportment. But hey, two out of three aint bad, so Mrs Miller and I rubbed along just fine – as long as I didn’t question what songs she taught me to play. (And as to deportment, I have had the dubious pleasure of entire afternoons spent walking about with books on my head, lessons in how to sit, how to cross my legs, how to exit a car, how to enter a car, how to walk up a staircase in high heels and long dresses, how to walk down that same staircase…)
Anyway, while I remember Mrs Miller with fondness, she is not the theme of today’s post. America the Beautiful is.
It started in San Francisco. I could move there tomorrow. Yes, the streets are a cardiovascular challenge, but so what? This is relatively young city (from a European perspective, it’s a toddler at most) but the tree lined streets, the gorgeous architecture and the ever present sea makes this beyond a doubt one of the most beautiful and welcoming cities I’ve visited. (My mother, however, could never live there on account of the wind – she hates it when her hair lifts out of place.)

So, we were sort of sad when we left San Francisco behind and took the 580 east, making for Yosemite. I like road trips – even more so when hubby is driving and I can look about. Okay, so I was in charge of map reading, not all that onerous a task on this particular journey, and so I studied the passing landscape. (Well, to be honest, I spent quite some time studying cars. I like cars, preferably the growly type with dual exhaust pipes. Plenty of those in the bay area…)
Somewhat more inland, and we entered the realms of mono-culture. Apricots, apricots, apricots, cherries, cherries, cherries, apricots, apricots, almonds and look, a grove of walnut trees. I am doubtful about this form of agriculture – monocultures come at the expense of diversity. However, it all looked very neat and tidy – settled, if you will. Not so that it qualified as an “America the beautiful” moment, though – despite the gorgeous oleanders, huge drifts of white and pink that bordered roads and fences.
We passed Oakland. The Sierra Nevada began to be discernible as foggy shapes in the distance. I entertained hubby by singing “Desde la Sierra Nevada viene bajando, cielito lindo…” Hubby, being a smart man, merely smiled. We entered the foothills, and I fell silent. Around me, a carpet of tawny high grasses gilded the rolling hills, here and there dotted with the odd black oak, a couple of cows or a horse.
We travelled onwards. Foothills became respectable ski slopes, steep if rounded, and hubby’s hands tightened on the steering wheel as we spiralled our way upwards. We made it over the first set of hills and entered a landscape of valleys and ever-growing hills.
“Not much in the way of mountains,” hubby commented.
“What?” I gazed at the slopes towering above us.
“Well, you know: they lack in harshness, somehow.”
This, dear people, was said BEFORE he saw Yosemite valley, with Half-dome in the distance. After that, he shut up regarding “real mountains”… 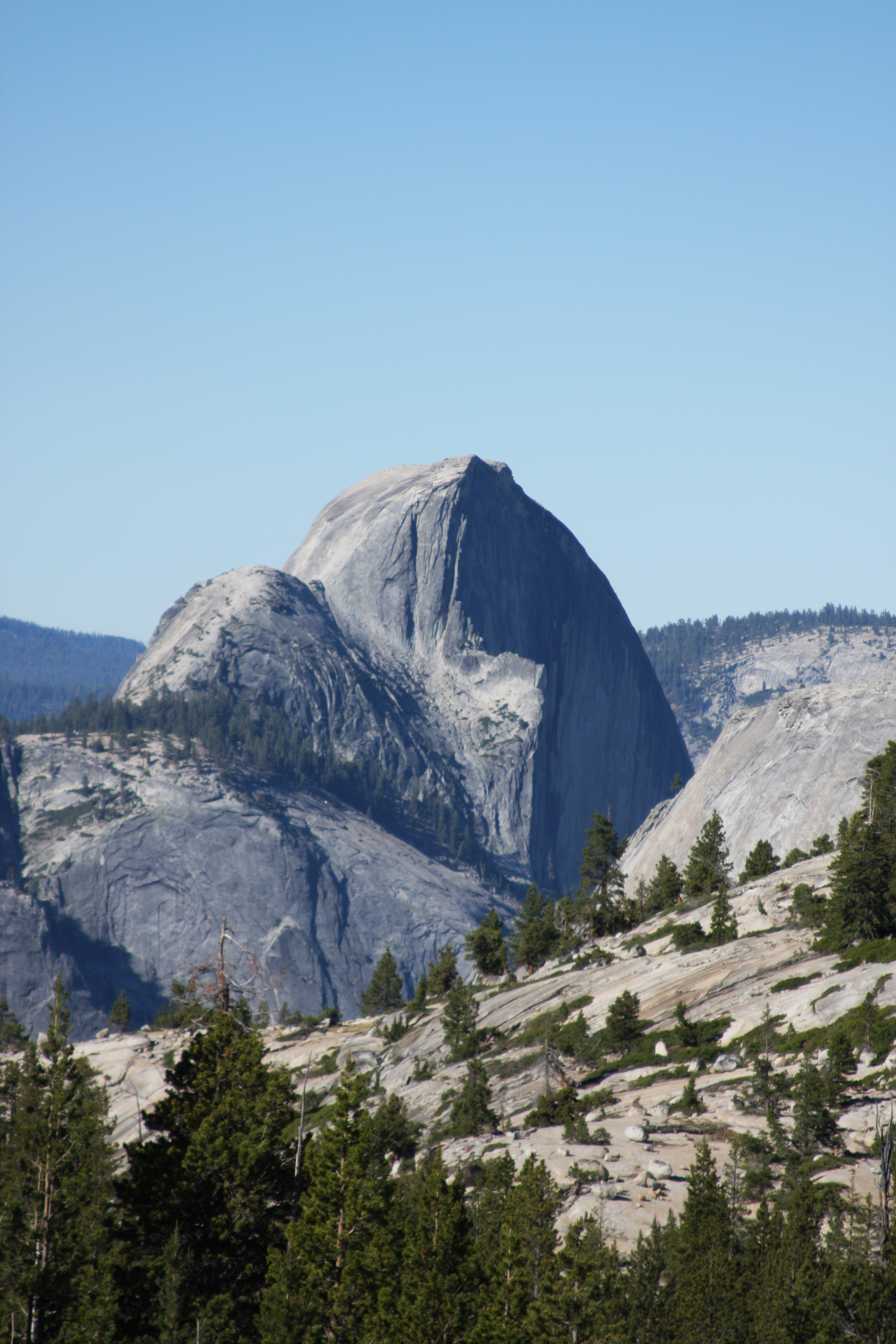 I don’t have words to describe Yosemite – suffice it to say I spent the entire day singing “America the beautiful” under my breath, repeating over and over “for purple mountain majesties above the fruited plain” (See how neatly I tie it all together?)
The valley of Yosemite is like a green jewel set in purple-grey stone. Yosemite is granite cliffs that rise to touch the skies, waterfalls that thunder downwards, boulders smoothed by tons of ice into soft shapes so at odds with the stone itself. And trees – everywhere trees! It’s not as if we don’t have pine trees in Sweden – we have plenty – but in comparison with the specimens that tower above us in Yosemite, Swedish pines resemble chopsticks – fragile and puny. As a side comment, EVERYTHING is much bigger in America: the trees, the moose, the wolves, the lynx – even the warning cones used to designate road works. (And let’s not get started on the portions…) 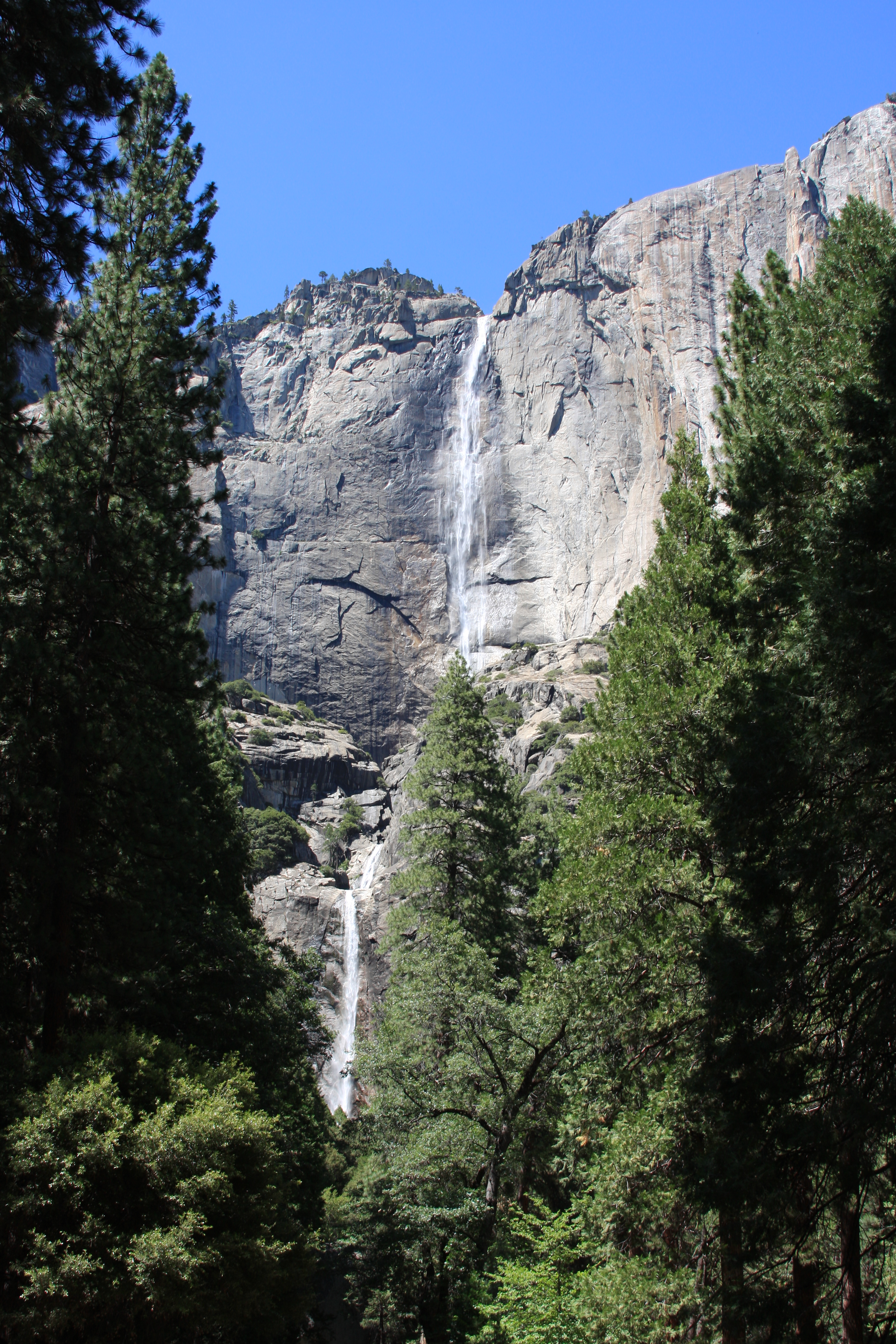 What struck me most about Yosemite was that it was a place imbued with benevolence. That sounds silly, I know, but there was something about the silence among the giant sequoias, the way the sunlight filtered through tree crowns so high overhead I had to crane my head back just to see them, that filled me with a sensation of peace – and, in a way, of insignificance. These towering cliffs have stood like sentinels for thousands of years, they’ve seen generations of humans come and go, will see many more generations come and go, and ultimately it is possible they will still be here when we are gone. Is that a frightening thought? Maybe.
After Yosemite, we set out for Death Valley. And yes, this evoked images of bleached bones at dry waterholes, of vultures circling like vigilant specks high up above, waiting for whatever fool had been stupid enough to enter this wasteland to die, thereby giving the carrion eaters an unexpected feast.

If Yosemite is an expression of the Creator’s/Mother Nature’s bountiful and fertile generosity, Death Valley brings home the message that Mother Nature can paint the most vibrant of pictures without stopping to consider such inconsequential aspects as our need for water to survive. In this harsh environment life is eerily absent – at least to the eye of the casual observer. But beauty is present everywhere, the rock and earth of the hillsides exploding in purple, in red and orange, in yellow and grey. The valley floor shimmers with heat, creating the impression that there might be water at the bottom, when in fact it is all sand and dirt, an arid wasteland where the heat is such it sucks your wits out. Once again, I felt inconsequential. Once again, I was humbled by the beauty that surrounded me. But this time, there was no benevolence. This was Nature showing its teeth. 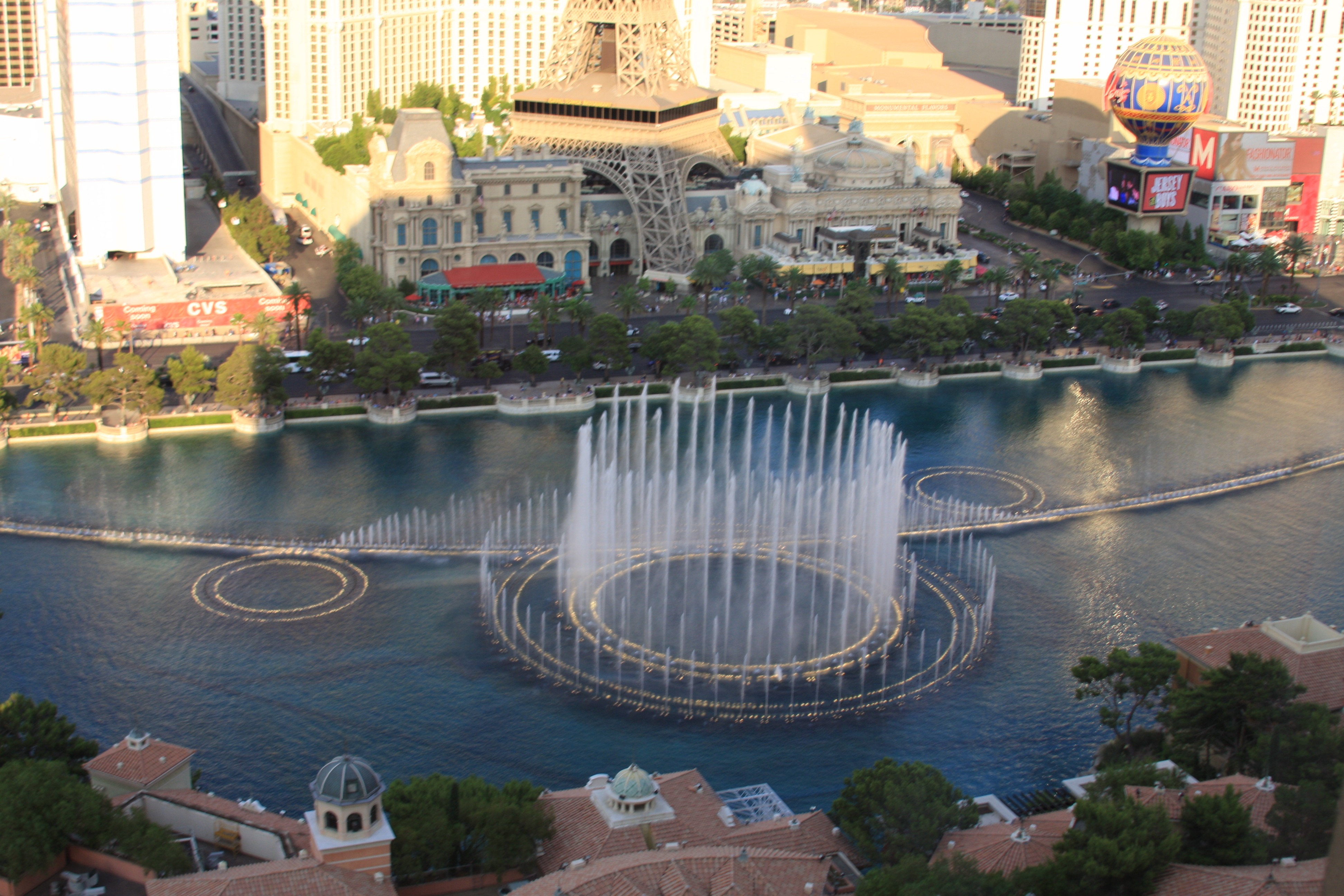 After the heat of Death Valley it came as something as a relief to end up in an air-conditioned room, with cold water in the shower and a magnificent waterworks display outside our window. Las Vegas with all its lights, all its pulse is at the opposite end of the scale of places such as Death Valley (even if the heat was similar). And yes, the Bellagio fountain is indeed a marvel in itself, proving that man can create impressive beauty – but does it rival the wonders of places like Yosemite and Death Valley? Nope. Not even close.
America, a land that stretches from ocean to ocean (or shining sea, as the lyrics say). America, a land in which Nature shows itself in all its glory, from the tenacious cacti that survive the punishing heat in the desert, to the bright green lichen that decorate the ancient sequoias. America, truly a beautiful, beautiful land which I hope to revisit many more times. After all, there is so much more to explore!