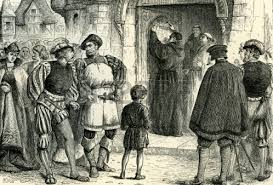 When Martin Luther nailed his 95 theses to that church door in Wittenberg, he had no idea what he was unleashing on the world. Or maybe he had, hoping that his actions would cause an incendiary debate and reform in all things religious. Well, he succeeded in creating debate, all right, and when he died close to thirty years later, he was still under excommunication by the pope. By then, Martin Luther no longer recognised the pope’s authority – and neither did a growing number of people throughout Europe.
At a distance of five hundred years, we can’t comprehend just how cataclysmic the Reformation was. Over a couple of decades, God-given truths were turned upside down, one of the more controversial aspects being that the true believer had no need of priests in his communication with God. It sufficed to study the Bible and meditate on God’s truth as expressed in the Holy Book. 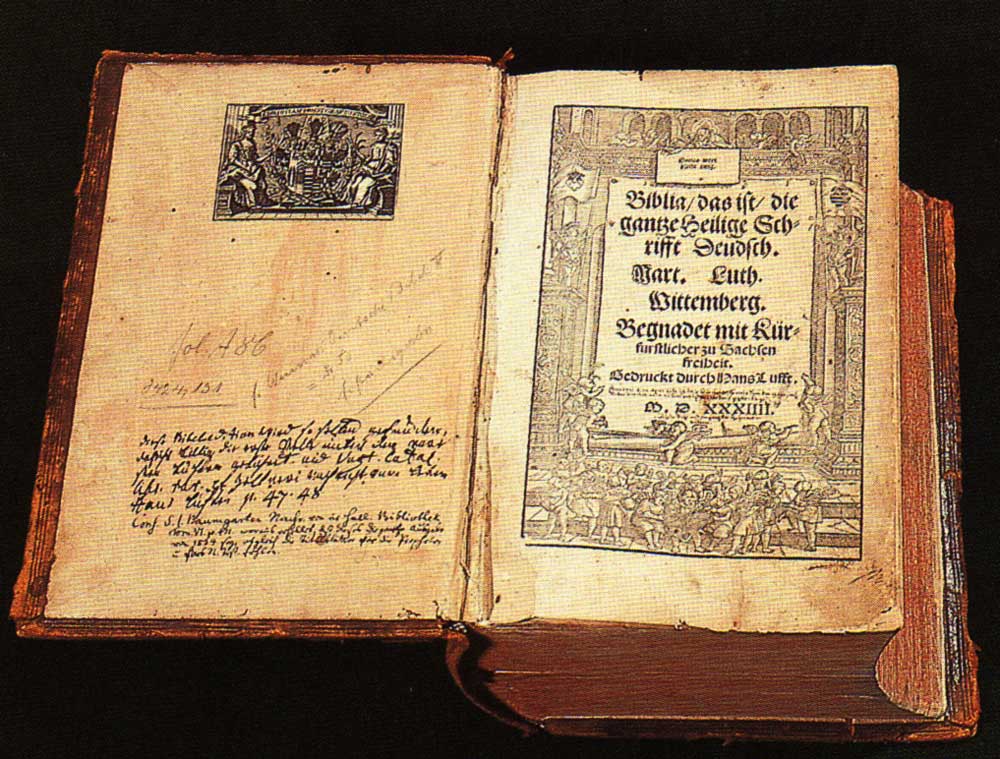 Where before the Bible was printed in Latin, now it was being translated into vernacular, making God’s word available to anyone who could read. Literacy exploded in Protestant regions, and these newly literate soon discovered other reading matter than the Bible, thereby starting an educational process that would culminate in our present day democratic society.
The Holy Roman Church responded forcefully to this new threat to its hegemony (and finances). Not only was there an impressive out-pouring of art and literature defending the true faith plus an increase in efforts to bring the lost sheep back to the fold – such as the installation of the Society of Jesus under Loyola, an order whose main purpose was to defend and bolster the faith- the Counter Reformation also applied other methods: heretics were persecuted, arrested, tortured and burnt at the stake – nothing new, really.

As the Protestant factions grew stronger, they resorted to their own persecution, torture and execution – but of Catholics. A sort of tit for tat, one could say. In general, the assumption was that all Catholics were loyal to the pope, not to their king or queen. That, I would think, was in general a correct assumption. For people who still believed in the afterlife and for whom heaven and hell were realities rather than metaphors, protecting their eternal souls came first. But from there to assume all Catholics were nefarious traitors – well, it’s a bit of a leap, isn’t it?

In England, the authorities were taking no chances. James I introduced legislation aimed at Catholics who aspired to public office whereby any higher official should regularly receive communion as per the Church of England rites – anathema to a Catholic – but initially no one seems to have bothered with upholding it. In fact, James had several capable Catholic men in positions of trust. Things became somewhat trickier as per the reinforced Corporation Act of 1661, making it mandatory to partake of the sacraments as per the Church of England. However, not all Catholics were subject to the law – Catholic peers were generally exempt.
In 1673, Parliament in its wisdom passed the Test Act. It no longer sufficed to receive the sacrament of the Lord’s Supper as per Anglican rites, now anyone aspiring to serve as officers of the court, parliament or the military, also had to reject the concept of transubstantiation (a central tenet in the Catholic faith). Further to this, any person aspiring to public office had to take an Oath of Supremacy and Allegiance, in effect placing their loyalty to the king of England before that to, for example, the pope.
Clearly all these measures were not enough. In 1678, Titus Oates revealed the so called Popish Plot to the shocked authorities, describing detailed plans to rid England of its present monarch. There was no Popish Plot – Titus was a narrow-minded worm of a man who saw his chance to fame and grabbed it, titillating his audience with one invented detail after the other. His ridiculous construction of lies could (and should) have been exposed immediately by the members of Parliament, but certain members were utterly thrilled by this development as it gave them an opportunity to further tighten up the Anti-Catholic legislation.

The reinforced Test Act required all peers and members of Parliament to declare against transubstantiation, the existence of saints and the sacraments of Mass, thereby effectively ousting all Catholics from Parliament. The Catholic lords fought back as well as they could and succeeded in delaying the act plus managed to weaken it substantially by sneaking in an exception for the Duke of York – that most Catholic heir to the English throne.
A consequence of all this legislation and badmouthing was to make life very difficult for Catholics in general. When Edmund Godfrey, a Protestant magistrate, was found dead, the anti-papists went wild. London seethed with anger, Catholics were beaten and hounded, and people were warned to be on their guard: there were evil Jesuits everywhere, there were nasty recusants hiding throughout the country, horrible Catholic people that wanted to overthrow the Anglican Church and reinstate the hegemony of the Pope in England. What can I say? A crowd gone wild is a hotbed of fevered imaginations – even more so when people in authority foment the flames of lunacy.
England’s anti-Catholic legislation was to remain in place until 1829, when it was repealed by George IV. By then, the Test Act had long since played out its role, but for a number of decades in the 17th century, Catholics did best in keeping a very low profile. Very low. Especially if you were a Catholic priest. 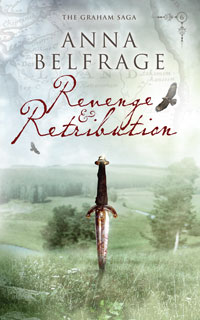 Religion plays an important part in my series The Graham Saga. In Revenge and Retribution, the sixth instalment of the series, Matthew and Alex welcome an injured Catholic priest into their home. Well; Alex welcomes. For Matthew, this is not an entirely easy thing to do, seeing as he is more than aware of the spiritual deficiency that characterises a papist. Alex doesn’t agree: to her the differences between a Catholic and a Protestant are very minor – probably reflecting the fact that she is a modern day woman. In the excerpt below, the Graham household has been augmented with yet another person, a Presbyterian minister, making things rather interesting.
Conversation became somewhat livelier with two men of God in the house – maybe a bit too lively, Alex sighed, when Father Muñoz and Minister Allerton settled down for yet another intense religious debate, the minister seconded by Daniel, the priest fighting his corner alone.
Father Muñoz sat up straighter and looked at Minister Allerton.
“No.” He shook his head. “Absolutely not. God allows our actions to speak for us.”
“Of course,” Minister Allerton said, “if we belong to the chosen few.” He gave the young priest a challenging look.
“Hmph!” Father Muñoz drank deeply from his mug of beer. “God is not that fickle. We live on this earth a short while, and it’s in many ways a testing ground for eternal life that comes later. God is merciful and forgives us our trespasses on behalf of His Son. He sees us labour and strive to be good, and He is pleased. He sees us fall into a life of evil, and He decides if the stay in purgatory will be long and painful or if we go to hell directly. But it’s the quality of our sins and the genuineness of our repentance that ultimately decide our eternal fate.”
Too right, Alex agreed, even if she sincerely hoped God was somewhat selective when it came to deathbed repentance. If not, heaven would be chock-full of some rather nasty types.
“Purgatory!” Minister Allerton waved dismissively. “Nowhere in the scriptures is that mentioned. It’s nothing but a figment of imagination that allows the dying sinners to hope they may still be saved.”
“Not to me,” Father Muñoz said, looking quite mulish. “To me, God is more prone to forgive than damn, and as such He has created one last opportunity for the lost soul to gain entry to heaven.”
The argument went on and on, the churchmen plunging deeper and deeper into the scriptures and the history of the Christian Church.
“Why be good?” Father Muñoz argued. “Why should we strive to lead exemplary lives if God has already preordained who goes to Heaven?”
“Why be good?” Minister Allerton replied mockingly. “Why strive to lead exemplary lives if all you have to do is beg forgiveness for your sins before you die?”
Most of the adults around the table nodded in agreement.
“Lewd and sinful,” Mrs Parson muttered to Alex. “All papists are, more or less. And then, on their deathbed, they recant. Not that it helps the misguided souls, bound for hell as they are. Pity on the wee priest who seems a good enough man – just like his father.”
“Hmm,” Alex said as neutrally as she could, and then brought the whole discussion to a halt by plonking down the pudding dish in the middle of the table.