Whenever dear hubby wants to go off on some sort of excursion, he always dangles the carrot of history before my nose. Being a predictable sort, I always bite. (This, of course, leads me to consider just how much he has manipulated me throughout the years. Quite a lot, I suspect…)
Anyway, this time round he suggested we set off on a hike that would take us along an ancient medieval road. It would also, he said, lead us to something called Kastagropen (a deep crevice which, tradition has it, was used to dispose of old people in. One simply shoved them over the edge). Now, I know for a fact that my forebears did not throw the old and infirm off a cliff (phew!) but I was curious as to Kastagropen for an entirely other reason: this was where Swedish authorities purportedly hanged Danish rebels in the 17th century, leaving their rotting bodies to dangle like huge over-ripe fruit until they fell to the ground in pieces. This, unfortunately, does seem to be a true story.
So, off we went, with hubby throwing in yet another teaser. Once we’d done the medieval road and the Crevice of Death, we were going to hike to the Dead Village. Yet another cheerful little destination…
A short drive, a kilometer or so walking through the forest, and it was becoming quite apparent the road we were walking on was old – really old. I sort of shivered at the thought of all those ancient feet, shod in heavy wooden clogs for the most part, that had walked here before me, steadying the creaking wheel of their overloaded cart, pulling recalcitrant oxen along, or just dancing at the side of their loved one.

The road followed the bottom of the crevice, with ancient stone-bordered channels on both sides to lead off the water. The further we walked, the steeper the sides of the gorge became, until we were standing beneath something called The Preacher’s Pulpit. Anyone standing up there to address the people would be heard for miles. A perfect place for a rebellious Dane to call his people together and urge them to fight the Swedish invaders unto death. Just as perfect a place to display that same Dane, now hanging at the end of a noose…
Those 17th century Danish rebels went by the name of Snapphanar – this due to their preference for snaphance lock muskets (for more, see here). They were fighting for their right to the land, for their customs and language. The Swedish aggressors were less than impressed, and the captured rebels were tortured and killed in the most horrible ways to instill fear and obedience in the rest of the people. Seeing your man nailed to a church door and there left to die must be a terrifying experience. Watching your relatives have their limbs torn apart before they were hanged was quite the deterrent. And yet, people still hid the rebels, still held on to their Danish roots, which was why the Swedish authorities decided to do some deportation, bringing in good Swedish people to replace the Danish families sent off to Swedish Livland (present day Baltic States).
I slipped my hand into hubby’s as we stood craning or necks back under The Preacher’s Pulpit. For an instant, I could see the surrounding trees adorned by hanged corpses, I could hear the raucous sound of crows and rooks as they pecked at unseeing eyes, unfeeling faces. Ugh.
After this unsettling experience, we continued along the old road. The water in the ancient ditches leapt and burbled cheerfully, wrens and robins darted back and forth, and the spectres of those unfortunate 17th century rebels faded from my mind. Instead, we set off in search of the Dead Village.
This part of Sweden is a harsh land. The ground is littered with stone, the terrain is a collection of hills and crevices, of sudden jutting cliffs and boulders. To clear a field would have been back-breaking work, and the people who lived here were probably always staving of starvation, never being able to grow quite enough to see them comfortably through the winter. Twenty kilometres to the south, things change. The earth is rich and fertile, the ground undulates towards the sea. Whoever owned those lands, could count on plentiful harvests, in difference to the poor folk who inhabited the forests and complemented their sad little fields with lumber and pigs.
In the mid 19th century, many of these poor Swedish people took the decision to leave. America beckoned, promising virgin land ready for the plough, endless acres just waiting for a new owner. It also promised religious freedom, an unknown concept in Sweden where the Swedish Lutheran Church ruled absolute and did its best to squash any alternative religion, such as the Methodist Church or the Evangelists. (Religious freedom is a relatively new concept in Sweden, where Conventicle Laws existed until 1858)
In the poorer parts of Sweden, these new expressions of faith resonated with the people. In response, the Swedish Church fined and punished, making the poorer even poorer. A vicious circle that ultimately drove entire communities to sell off everything they had and set off for the land of hopes and dreams come true.
The Dead Village is one such community. The inhabitants took a collective decision to leave in the 1860s or so, and off they went, leaving their houses behind. In a terrain littered by stone, the village was crisscrossed by dry stone walls, testament to just how much stone and rocks had been moved off the narrow fields. 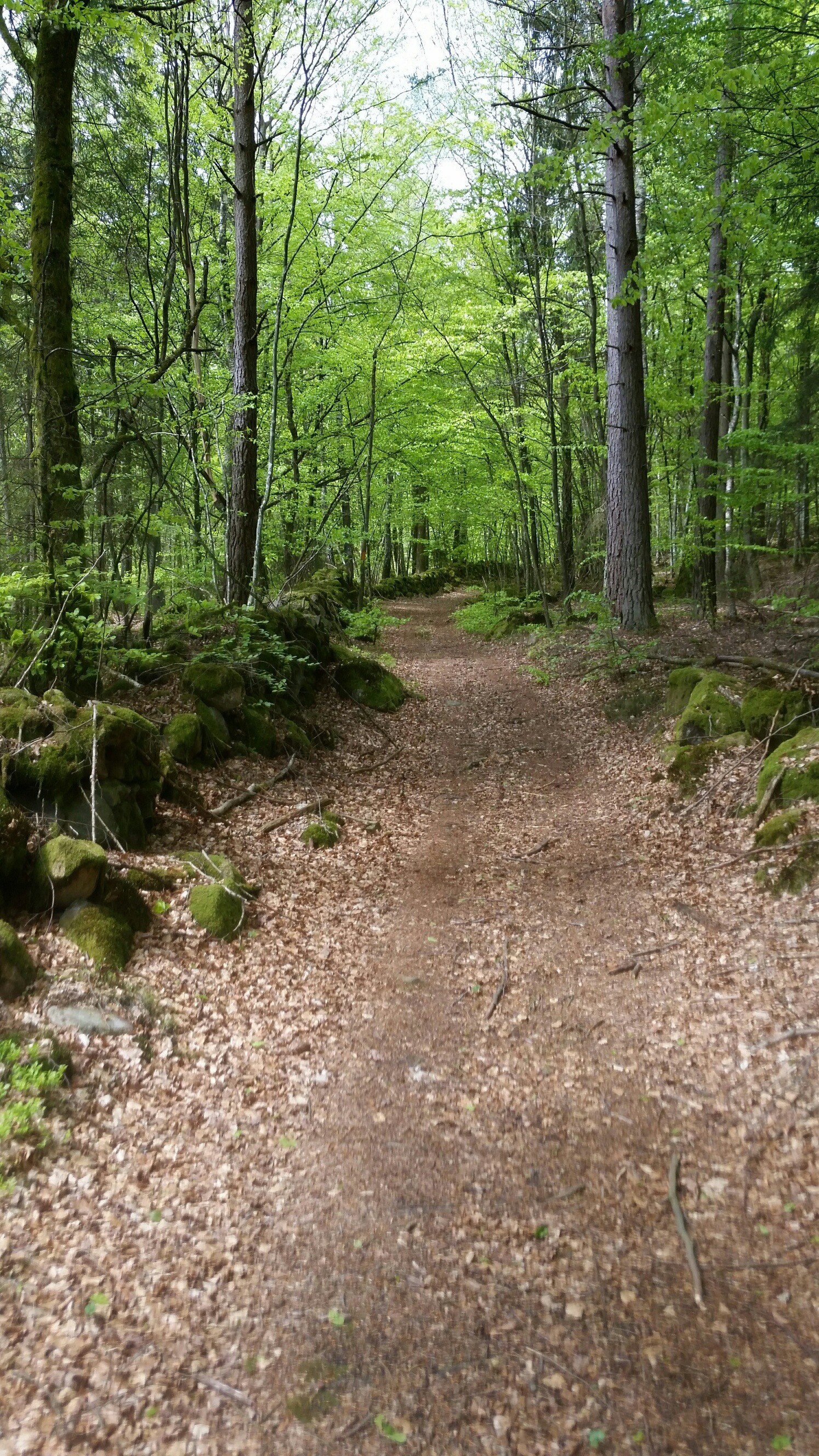 Woods that once rang with the sound of axes, where boys chased after piglets and girls tended the precious cow, now lie silent. The wind soughing through the trees, the distant sound of water and birds – that’s all I could hear. A branch broke under my foot, a deer leaped off down a hillside, and the only thing that showed this was once inhabited land was the road beneath my feet – an old, old road – and the stone walls, now covered with moss. Nothing remained of the houses beyond the odd shallow indentation. Nothing remained of gardens and fields, nature having reclaimed its own. That’s how ephemeral our presence in this world is – give nature time, and it swallows back whatever we have wrested from it.
“Not these days,” my daughter said when we discussed this. “These days, we build in concrete.”
I merely smiled. A block of concrete left in the open will soon be perforated by grasses and dandelions, crumbling back into its basic components with the rain and the sun.

To me, it is somehow comforting. Life is so much more than us, the Earth is so much more than us. We may think we are the pinnacle of creation, that whatever we build will stand forever and more, but this is just us succumbing to that most ancient of sins, hubris. I stood in the middle of the bright green beech forest and rested my hand on an ancient granite gatepost. This is what remained, a piece of standing rock. Everything else had returned to being what it was – before man, before ploughs and axes.
All in all, it was a good hike. A walk through centuries of history, through woods as constant now as they were then. A lesson in humility, bringing home just how short and precious our time on Earth is. Because once we die, we leave very little behind – beyond the dreams we’ve passed on to the coming generations and the hope that somewhere someone will remember us, maybe even speak our name. The people who once lived in the Dead Village are nameless today. The valiant Danish rebels are just as anonymous, casual facts in a history book, no more. But they lived – just like us – and they died – like all men do. And somewhere, someone wept and called their name.

6 thoughts on “Of old roads and dead men”