When I was a child, tulips were mostly yellow flowers my mother bought around Easter. Sometimes, they were red, and now and then my mother would receive a bouquet of pink tulips with mimosa (good combo, that), but mostly they were yellow.

I never buy yellow tulips. I go wild and crazy with pink and purple, I buy swelling parrot tulips, I mix red and white and mildly green, but never yellow. Not sure why. 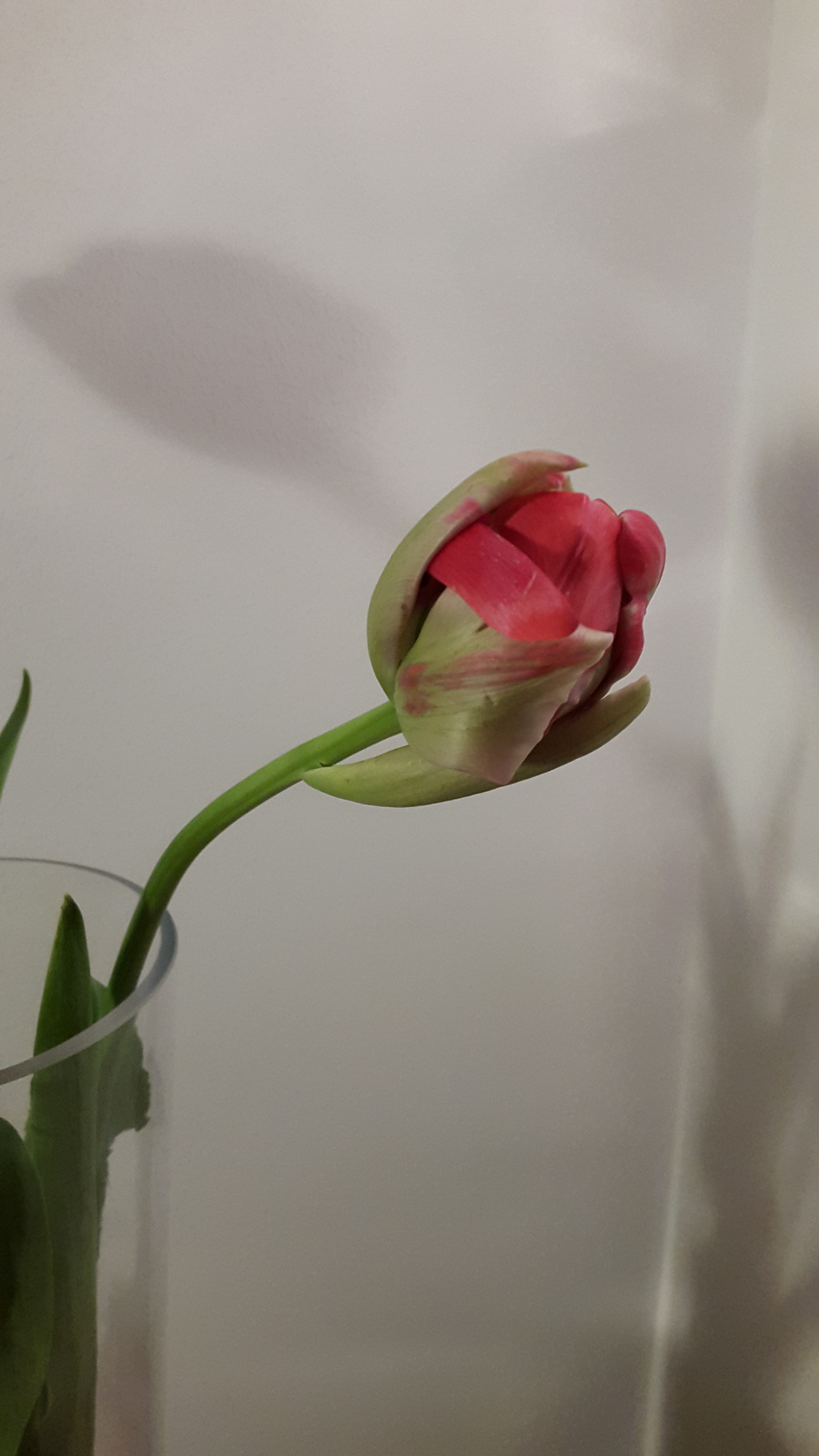 Tulips go through an interesting metamorphosis. When you buy them, the flowerheads are generally closed, and there’s something rather prim about them. Set them in water and leave them indoors for some day, and their hidden sensual nature stands revealed, as petals widen, stems curve, displaying an abandoned opulence. This is the tulip I love, vibrant with colour and somehow rather decadent. It is, I believe, the tulip in this stage that drove the staid Dutchmen wild and crazy in the 17th century, when one single tulip bulb could cost as much as four well-grown oxen or two tons of butter.

Mostly people think of tulips and sort of leapfrog mentally to the Netherlands. Even though the Dutch no longer mortgage their houses, their businesses, their children and wives, to buy rare tulip bulbs, the Dutch retain a love affair with the tulips – and make a mint out of them. These days, tulip cultivation in the Netherlands is not a reckless passion – it is a business.

One could therefore think the tulip saw the light of the day in the Netherlands – together with such other essentials as chocolate sprinkles, Gouda cheese and croquettes – but that is not the case. The wild tulip is a native of the central Asian steppes,  and in its original forms it doesn’t much resemble any of the magnificent varieties we plunk into vases. The wild tulip is a modest little thing, a collection of petals that open widely to the sun and fade in a day or so. It is quite often red, now and then yellow, and once it has flowered, the petals drift off to lie like splotches of colour on the ground for a day or two before floating away.

The Persians developed an early fascination with the tulip – personally I think it had to do with the shape of stem and bud, forceful and upright. Whatever the reason, by the 10th century the Persians were already busy producing cultivated varieties, striving for bigger flowers, more petals, more colours. Man is rarely content with the original design of things…

From Persia, the tulip went on to conquer the Ottoman Empire, and here we have the first indications of a tulip craze,  with the tulip popping up as an integral part of carpet designs, art, embroidery – well, you name it. Not all that difficult to understand, given just how distinctive the tulip is – and how easy to simplify into motifs. But while the Turks adored their tulips, they did not go utterly wild and crazy about them – not to the point of risking bankruptcy to purchase a rare bulb or two.

In the 16th century the tulip made it to Europe – to Vienna, to be precise. The Viennese were a jaded lot, accustomed to novelties from the east, and the tulip didn’t cause much a stir. Besides, the Viennese had a complex relationship with the Ottoman Empire. Already back in 1529, Sultan Suleiman the Magnificent had cast a covetous eye in the direction of Vienna, but his attempt to conquer the city failed. Suleiman’s successors kept the dream of Vienna alive, and for the coming century or so, the Ottoman Empire made several attempts at getting their hands on the Hapsburg capital, leading to less than cordial relations. Fortunately – at least for those of us who consider Sacher torte, croissants and Viennese waltz indispensable – the Ottomans never conquered Vienna, with the last attempt made in 1683. (And no, the croissant was NOT invented as a victory symbol over the Ottomans. The Viennese had been eating croissants since the middle ages…)

Anyway; back to our inedible if beautiful flower, the tulip. As an aside, I can inform you that tulips may not be your first choice of food, but there do not seem to be any negative consequences to ingesting the flower – this based on empirical research, as my eldest son once ate his way through every single one of our tulips, leaving a wake of half chewed petals in his wake. In his defense, he was still a toddler. 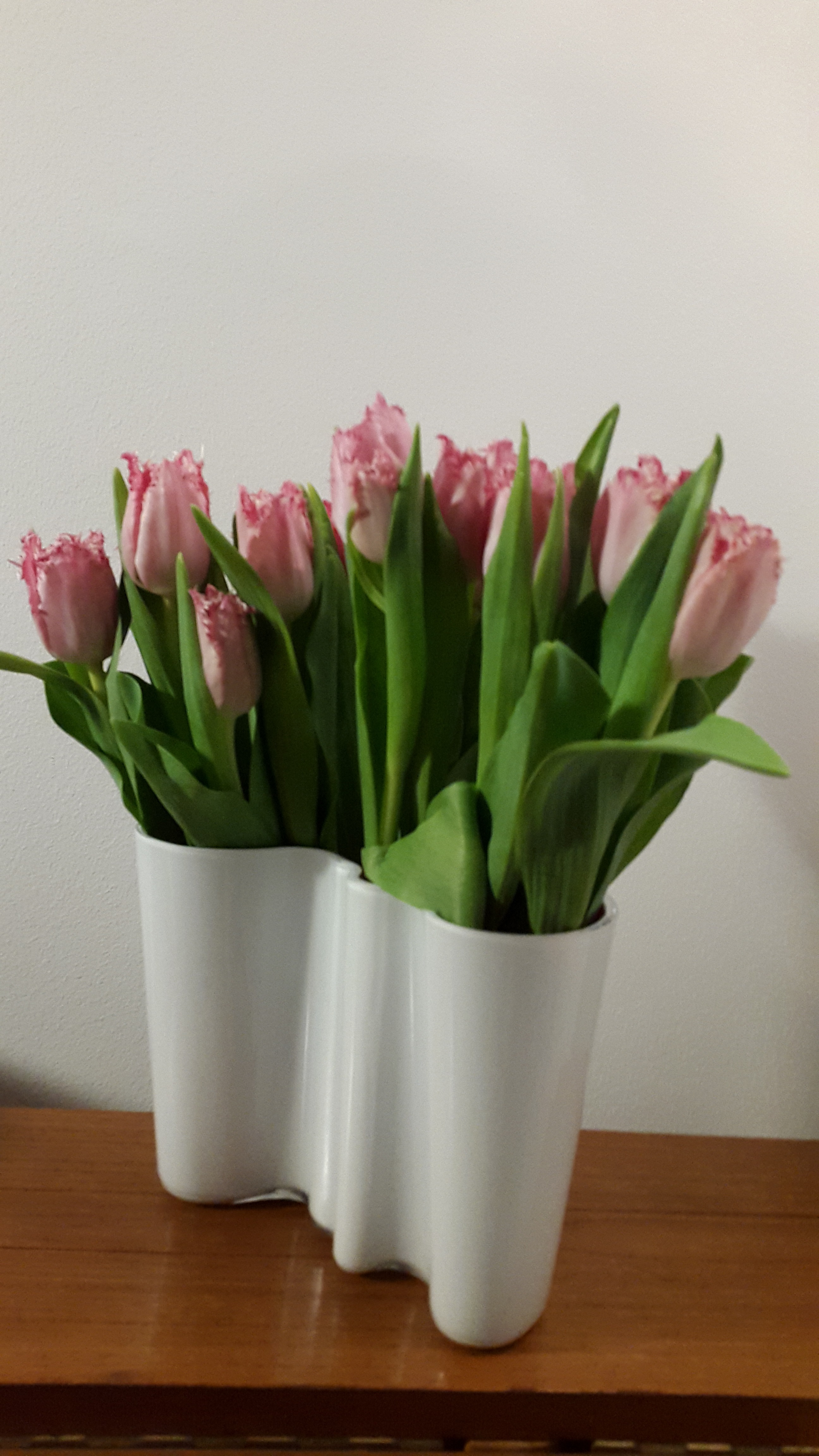 While the Viennese sort of yawned and looked bored when presented with the tulip, the Dutchmen went totally crazy. Love at first sight, one could say. And love, as we know, can have us all succumb to madness. Now,  what is important to remember when considering the Dutch and tulips, is that in the 17th century, the Netherlands (well, they weren’t the Netherlands at the time, they were a federation of states that went by the name United Provinces) were a burgeoning merchant power. Being innovative – and a tad greedy – the Dutch were quick to develop a number of financial instruments, one of these being the future.

The future is originally an instrument whereby someone buys a future crop from someone else. The Italian bankers had been doing this for some time, with Guido buying Niccolo’s entire wheat harvest at price X long before Niccolo had even planted his fields. Guido hoped that by the time the harvest was ripe and ready, the price for wheat would be X+++. Niccolo just needed the money.

What the Dutch did was create a market place for the futures. Where before, the future was a contract between Guido and Noccolo, now the contract as such could be sold, and unbeknownst to Niccolo, he could suddenly be in the position of having to deliver his entire harvest to Alessandro, with whom he hadn’t spoken for like twenty years, given that Alessandro had stolen his girl. Neither here nor there…

So: the Dutch had a financial market, they had money and they just needed – craved – something to speculate in. Enter the tulip. Not, at this point in time, a plain yellow tulip. Nope. Not even a red one. Oh no, our Dutch traders were more sophisticated than that – they aspired to uniqueness. Which was why it was the multi-coloured varieties that were the most highly priced.

Now, when people want something, they generally want it now. Problem with the tulip is that it takes a long, long time for a seed to become a bulb – like eight years. Ergo, demand for special tulips more than exceeded supply of these bulbs, and so in 1636 the prices went through the ceiling, even more so when the French started placing large orders for the popular bulbs.  The Dutch tulip traders went about with dollar signs in their eyes (not. The dollar wasn’t around, but you get the picture…). The desperate buyers offered ridiculous amounts of money for one single bulb, and contracts for the bulbs changed hands so rapidly it was difficult to fully track the price development. Everyone wanted in on this floral pyramid game. Everyone…

And then – wham! the bubble burst. Why, one wonders. Because someone started questioning the sanity of exchanging a dozen sheep for one bulb? Because it dawned on people that tulips may be easy on the eye, but don’t contribute to much more of life’s necessities? Whatever the case, one day the buyers at a planned auction just didn’t show. (This happened to coincide with an outbreak of the plague. Maybe this near death experience had people re-assessing the relative worth of tulips.) Those potential buyers were the lucky ones. They pulled out, while all the speculators sitting with minor fortunes in tulip bulb contracts on their hand were to experience just how ephemeral their wealth was. Easy come, easy go, as they say…

Since that rather spectacular tulipdriven financial crisis, this flower has retired to be preciesely that – a flower. The tulip price is not listed on world wide exchanges, people don’t fight over a bulb in the street. Instead, the tulip remains an appreciated indication that spring is on its way, an affordable thing of beauty in our everyday lives.

And as to the tulip’s exciting and colourful history, I don’t think about all this every time I buy tulips. Not quite.

10 thoughts on “Ode to the bulb – an abbreviated tulip history”