Us modern people have little exposure to death. Gone are the days when people lived cheek to jowl with their grannies and great.grannies, and so the first exposure most of us get to death is when our parents die. A sort of “wake up and smell the coffee” moment, as it brings home the inevitable fact that first we live, then we die. Of course, many live through the harrowing experience of seeing a child/sibling/loved one die well before they should, but in general, death is at a once remove, a sanitized end-of-life procedure we don’t want to know too much about.

It’s not that long ago since death was very integrated in our everyday life. First of all, because more people died younger – of disease, of war wounds, in childbirth – but also because generation lived close together. To our forebears, death was as normal as birth, another sequence in the endless circle of life. I guess it helped that most of our forebears probably did believe in an afterlife – although some of the grimmer depictions of hell everlasting did not exactly paint a comforting picture.

For the people of the past it was not so much the dying but the manner in which you passed that was important. There were good deaths and bad deaths, and of course everyone wanted a good death. Thing is, this good death thing varied with culture and time. 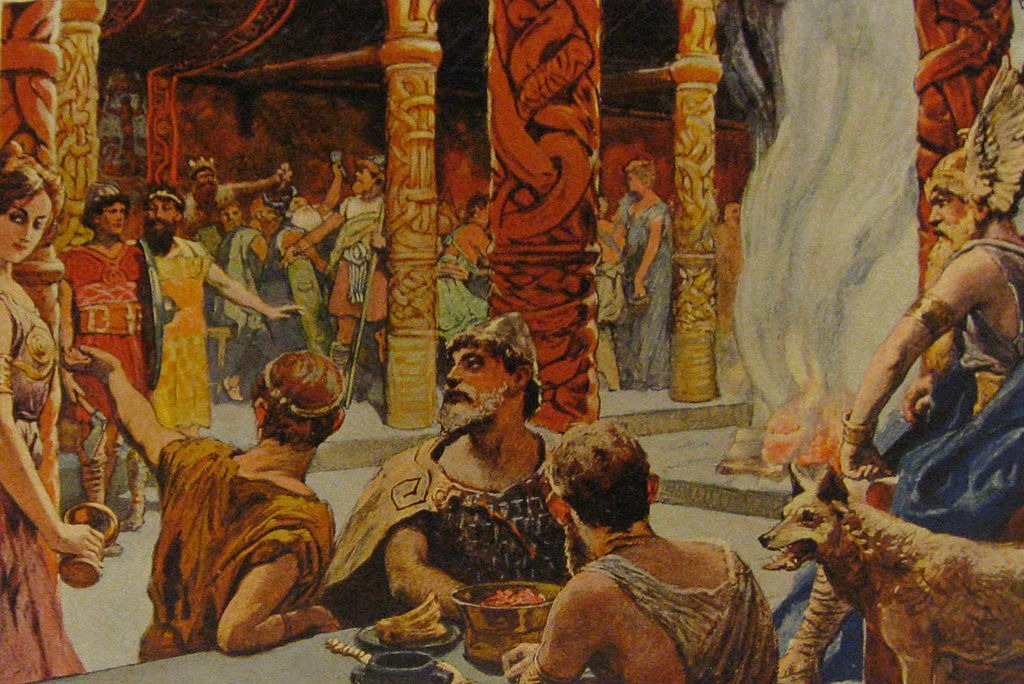 Should we drop by the Vikings, we find a people for whom “sotdöden” – death by disease, in bed – was something to avoid at all costs. Viking men did not get runestones raised in their memory if they departed this world in their sleep. No, these Nordic ancestors of mine wanted to die the true warrior’s death, thereby guaranteed a place in Valhalla. This is why Viking warriors were so reckless and determined in battle: there was no greater honour than to die with your sword in your hand, thereby inspiring songs and long, rhymed verses called “kväden”.

At times the male Vikings were accompanied by shield maidens on the battlefield, even if most of the time the women were left at home to take care of the farm and the kids and the ageing parents and the animals and the…These women probably died of exhaustion – in their beds. I still think they made it to Valhalla and the repetitive feasting on poor Särimner, the boar who was slaughtered every night and reborn the next day only to be slaughtered in time for the next dinner party.

The Vikings had a bit of a problem with Christ. What, a hale man in his best years and with long, flowing hair – vikings liked long, flowing hair – meekly allowed some barelegged wimps in short tunics to nail him to a cross? Where was his fighting spirit, hey? This is why us Scandinavians clung to our picturesque traditions such as the mid-winter blot well into the eleventh century. The mid-winter blot was one long bacchanalian party, complete with too much mead and the blood-sacrifices of everything from roosters to men (only male victims allowed).

Anyway, once the Scandinavians embraced Christianity, they became members of the Holy Church, like most of their fellow Europeans. Now the Church preached that a good death was a prepared death, i.e. the soon-to-be-dead person spent an adequate amount of time preparing for the afterlife, by praying, giving away their possessions and in general turning from their worldly lives to a contemplative one. I suppose this worked when people took time dying – and preferably not in some horrible contagious disease. Otherwise, this good death had as its main drawback that most of the time it is difficult to plan for your death unless you’re considering suicide. But to commit suicide was a major, major no-no as per the Church, so any spiritual preparation in advance was a total waste of time anyway. (Other cultures have an opposite view; take the Japanese and their ritual harakiri)

Fortunately – especially given the fact that the spread of Christianity had not exactly brought about world peace, rather the reverse – the church considered that those who died in battle also died good deaths. If you were hacked to death on a battlefield, you were to some extent forgiven for not having had the time to fix final absolution and all that. I would argue that those who were hacked to death while in battle suffered a better death than the poor sods who were “just” grievously wounded, and therefore transferred to the tender care of the field surgeons. Oh, dear, oh dear… this was NOT a good death. 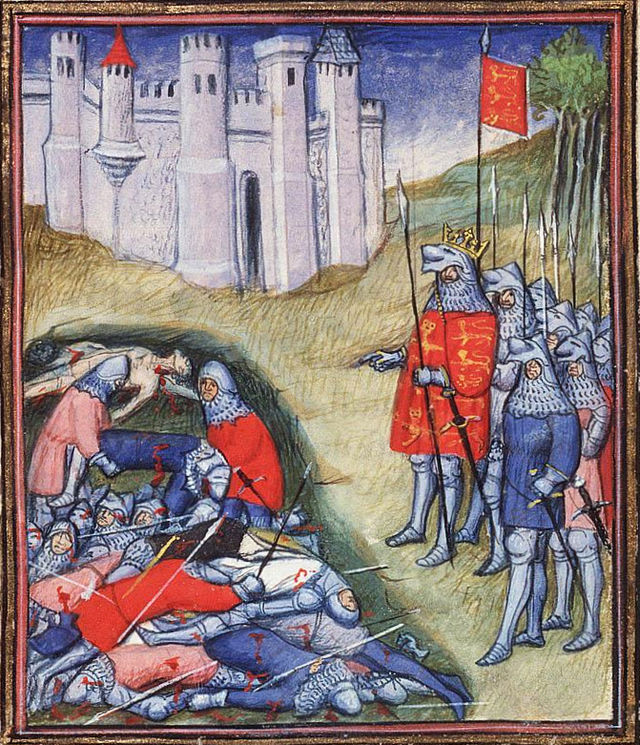 Imagine you’re a knight in the 14th century. You’ve yelled yourself hoarse at the battle of Crecy, and after the battle has been safely won, your companions find you in the field and carry you to the nearby surgeon. You have an arrowhead lodged in your thigh, and that last encounter with the desperate French knight and his panicked destrier has resulted in your chainmail having been trampled into your flesh. The surgeon will start by attempting to dislodge the arrow. That will hurt. It will hurt even more when he pours boiling oil over the wound to cleanse it. If you’re lucky, you’ll faint at this point, because when the surgeon starts dislodging the chainmail from your flesh, chances are your skin will be pulled off as well, causing bleeding wounds that will probably fester within the coming days, leaving you to die in fever and pain. As I said, not a good death. On the upside, you could be lucid enough to partake of last rites, thereby converting this potentially very bad death into a tentatively good one – at least from a spiritual perspective.

In general, the vast majority of deaths were not good. Dying of the plague – as approximately 40% of the European population did in the 14th century – was not a good death. So much panic did the spreading plague engender that those who could (like Boccaccio) fled the cities for the safer countryside. The plague left entire cities devastated, Florence, as an example, was left so underpopulated that it took until the 19th century before the entire area encircled by the 14th century walls was yet again inhabited.

Dying in childbirth was pretty grim – but it did come with the benefit of potentially allowing the dying woman the comfort of last rites. Dying as a heretic was not much fun – being set on fire rarely is, plus there was the further downside that as a heretic you’d die unshriven. 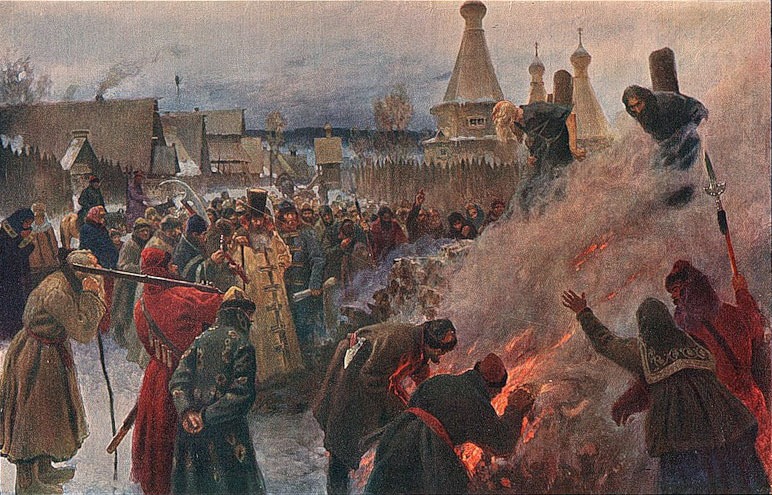 Being executed was a bad death. There was an element of sport involved, and the good executioner made sure to extend the fun for the watching public.  The poor sod being executed had no say in the matter, but chances are he was far more worried about what would happen after death. In a deeply religious society, it caused considerable anxiety to realise your bodily parts would be chopped off  and displayed in various parts of the kingdom, thereby guaranteeing you’d be an arm or a leg short when the Day of Resurrection dawned.

Most of us don’t need to worry about dying like our medieval ancestors. Chances of us being struck down by the plague are slim, and as to being burned at the stake, well we don’t do much of that anymore, do we? Dying in war, however, remains one of the more common causes of human demise. However sad and futile, we still send our children off to fight. Often the cause as such is good – or so we believe. And like mothers and fathers throughout history, we seek comfort in the cause when our child is returned to us dead. A good death? I think not.

No, chances are most of us will die in bed. Thanks to modern medicine, we will be spared pain at the moment of our passing. A good death in our society, a terrifying, shameful death for those ancient Vikings who wanted to make it to Valhalla and feast on the same old, same old, night after night. Few of us will call for last rites, having relegated the idea of an afterlife to the realm of fantasy and wishful thinking. And yet…Are we not more than the collection of skin and bone, blood and flesh, that make up our bodies? Isn’t there in all of us some sort of divine spark? Or is that simply me, not quite capable of getting my head round the terrifying concept that one day I will be no more? I don’t know.

I do know, however, that at some point we will all die. I guess all of us aspire to a good death, and for me that means dying with someone holding my hand. And maybe a view of the sky. And as to the afterlife, either it is or it isn’t, and whatever the case there’s very little we can do about it. Personally, I’m keeping my fingers crossed for green meadows dotted with daisies. And lambs. He who liveth – or dieth, in this case – shall see…

8 thoughts on “Dying the good death”