When I was a child, we had an eighteen tome encyclopedia in the bookshelf. On days when I had nothing else to read, I’d pull out one of the tomes, open it randomly and read about something I had (probably) never heard of before. Encyclopedias invite that kind of behaviour, the un-organised browsing that has the reader leaping from “aquifers” to “Attila” (and in my case getting stuck on Attila rather than the aquifers).

Such browsing is not possible to do on internet based encyclopedias. Yes, we can follow links from one article to the other, but chances are they are interrelated, and so the intellectual leap from Caesar to cannelloni doesn’t happen all that often. A pity, IMO, as a lot of that trivial knowledge cluttering up my brain comes from all those hours paging through heavy books that smelled slightly of mildew and dust.

But, there you are, the world changes, and either we change with it or we fossilise into complaining relics, and who wants to be a relic?

Now and then, though, that unstructured browsing does happen on internet. A word, a sentence snags your attention and suddenly you’re reading about something you had never heard of before. Which was how I came into contact with Chiune Sugihara. In actual fact, it was something a colleague of mine had said when returning from a trip to Lithuania that set it all off. “There was a museum there, to honour a Japanese dude.” Well, being chronically curious and quite unable to link a Japanese fellow with heroics in World War II Lithuania, I did some internet searches. This is where internet is so much better than that dusty old encyclopedia. I enter Japanese, Lithuania, World War Two, and hey presto, like a giant box of chocolates the web offers up one goodie after the other. Including Mr Sugihara. 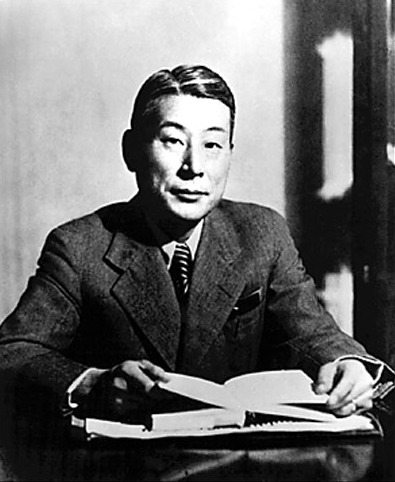 So, dear readers, today I’d like to share the story of Mr Sugihara, a modest man who never quite understood what all the fuss was about. After all, as he once said, all he was doing was following his conscience. I can give you a list as long as my arm of contemporaries with Mr Sugihara who did a very good job of totally ignoring their conscience. I suspect the list of people who heard their conscience but didn’t dare to act upon it is even longer. But, thankfully, some people do not compromise on integrity. I hope I would be one of them – but I’m not sure.

Chiune Sugihara was born in 1900, was one of those high achiever kids that sort of flew through  school and at teh age of nineteen he passed the Foreign Ministry Exams and became a diplomat. At a low level, initially,but he studied German and Russian, already spoke English, so the future looked nice and rosy. Well, if it hadn’t been for that active conscience of his…

Chiune was sent to China, to Manchuria. He was made Deputy Foreign minister of Manchuria, responsible for high level negotiations with the Soviet Union regarding the Manchurian Railroad. If he played his cards right, Chiune would soon be on the fast track to one plum job or the other. Instead, Chiune converted to Orthodox Christianity and resigned from his post in protest against how the Japanese were treating the Chinese.Did not go down well…

This was probably why Chiune with family was sent to Lithuania as vice-consul in Kaunas in 1939. Not the most exciting post in the world – definitely not from a Japanese perspective. But. Things were changing rapidly, and to give the Japanese Foreign Ministry their due, they had chosen a vice-consul who spoke fluent German and Russian and placed him just where the Soviet Union and the Third Reich were to collide. As an aside, vice-consul Sugihara was also supposed to inform himself about troop movements – especially on the German side, as the Japanese did not fully trust their Axis allies.

Some months later and Lithuania was full of Polish refugees, fleeing from the recent Blietzkrieg. Many of these refugees were Jews, desperate to escape the clutches of the Third Reich. Coming the other way were the Soviet Union forces – and Stalin was not exactly known for his pro-Jewish approach. In actual fact, it is difficult to list anything Stalin had positive feelings for – except his own power. Megalomaniac dictators tend to have that trait in common.

As the Soviet tanks rolled in, the Polish Jews, the Lithuanian Jews, well more or less all Jews, became desperate in their search for exit visas. They swamped consulates, embassies, they begged and pleaded. In general, the answer was ‘no’. But the lucky applicants who ended up at Chiune’s office got their visa. Not because the Japanese government had expressed any desire to accept large amounts of Jewish refugees – rather the reverse – but because Chiune decided not to ask before issuing the visas.

Word of mouth spread like bushfire, and during seven hot summer weeks in 1940, Chiune Sugihara wrote visas until his fingers bled. He also arranged with the Soviet authorities that the people covered by the visas could travel on the Trans-Siberian railway (at 5 times the normal cost, but still…)

Early in September, the consulate closed. Chiune and his wife wrote visas all night, they wrote them on the way to the train, they distributed blank papers with official Japanese seals and signatures – in brief, they did everything they could to ensure as many as possible got their visas. It is estimated Chiune’s efforts saved the life of somewhere between 6 000 and 10 000 people.

The Sugihara family was moved to Berlin and from there via Prague to Romania, where in 1944 they were imprisoned in a POW camp for 18 months. In 1946, they returned to Japan, and in 1947 Chiune was formally requested to resign. The official reasons behind the request for resignation was downsizing. The real reason probably had something to do with the 5 580 visas issued in Kaunas, Lithuania.

After the war, Chiune supported his family through a series of menial jobs. At some point, he took a job in the Soviet Union, living and working there for 16 years while his family remained in Japan. And in 1968, one of the benificiaries of all those visas found him and contacted him.The next year, Sugihara was invited to Israel and in 1985 he was granted the honour of being named a Righteous Among the Nations – plus he and his descendants were given perpetual Israeli citizenship. By then, Chiune was too old to travel,  but at some point someone asked him what his motivations had been when he saved all those people, 45 years earlier.

His answer? “I thought this would be the right thing to do. There is nothing wrong in saving other people’s lives.” For a good man, it is that simple: some things are right, some things are wrong. It is simply a matter of listening to your conscience and your heart. Today, there are many, many people on this earth that would never have existed had it not been for Mr Sugihara and his charitable approach to his fellowmen. I do believe our world could do with more people like him, men and women who set humanity before politics and power. After all, no matter your faith, no matter your God, life is sacred, a gift to be handled with care, whether it is our live or that of our neighbour’s. I guess some people have missed out on that particular aspect, haven’t they?