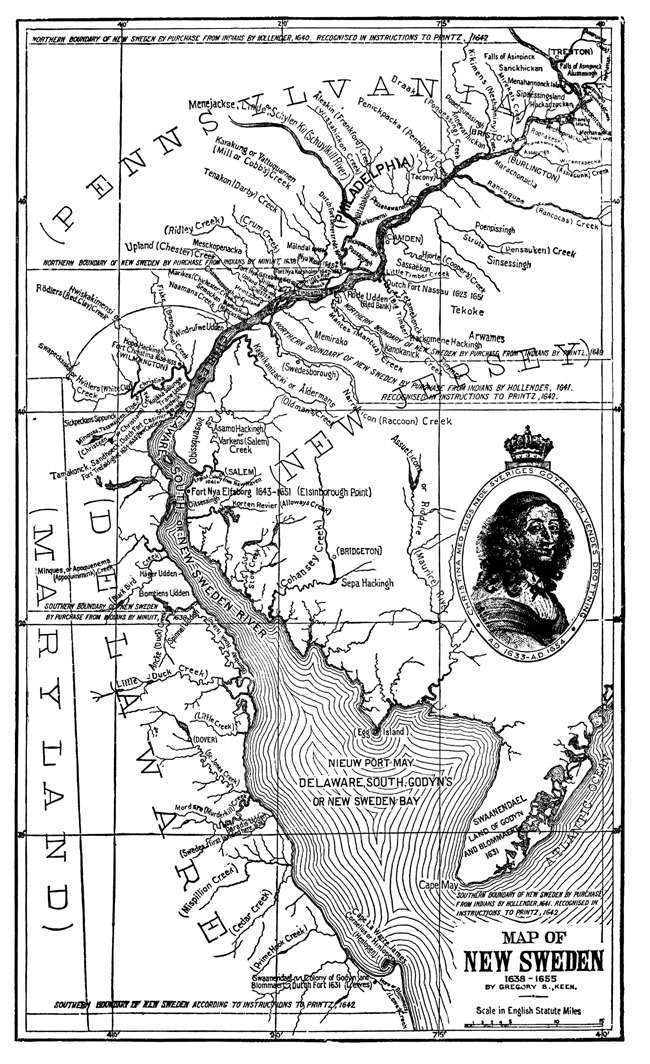 For a brief period in history, Sweden was a colonial power. Well, if we’re going to be quite correct, that should be for TWO brief  periods, one in the 17th century (very brief), one longer in the 18th-19th century (almost one hundred years). Let’s leave the latter period to the side for now and concentrate on 17th  century New Sweden – and even more specifically on one specific Swedish (or New Swedish) woman.

New Sweden existed for 17 proud years, to be more precise, between 1638 and 1655. Oh, halcyon days, when Sweden had a colony of its own! (Well…) While I was reading up on this short-lived colony, I came upon the story of a woman. I must admit that at first it was mostly her odd name that caught me eye. Seriously, what were the poor child’s father and mother thinking of, when they baptised her Armegott?

I’ve never heard of any other Swedish person named Armegottt. I’d hazard it’s German in origin, meaning roughly “Poor God”. At the time, Sweden was more or less on top of Germany, what with the Swedish army scything their way down through small German states towards the promising treasure houses in Prag and elsewhere which they enthusiastically looted. And before we go all morally superior regarding this (most) despicable Swedish behaviour, let me point out that a lot of that army was commanded by mercenary officers, many of them Scots, such as David Leslie, who would go on to captain the Scottish Covenanter Army in the English Civil War. Ah well; not of much interest to little Armegott Prinz.

Armegott’s father, Johan Björnsson Printz, was a Swedish officer. Not that he wanted to be – he aspired to be a priest, but while in Germany studying for priesthood, the poor young man was pressed into military service, first for the Austrian Archduke, then for the Swedish king. By then he was well reconciled with his new occupation, but after having surrendered a crucial city in 1625, the king sent him home in disgrace. Johan licked his wounded pride and did amends as well as he could, and by the 1640’s he was back in royal favour. By then, Gustavus Adolphus was dead and the country was run by Axel Oxenstierna on behalf of the underage Queen Christina.

Johan was appointed Governor of the fledgling New Sweden, and by all accounts he did a good job, insisting on cordial and respectful relations with the natives  and the neighbouring colonies. He also brought his family with him to New Sweden, a bevy of daughters and a wife. Must have been a welcome female addition, I suppose. Johan was an obese man, nick-named “Big Belly” by the local natives. Armegott seems to have inherited her father’s build, being tall and big all over. She was also, one gathers, a rather forceful young lady – this being a characteristic that would stay with her throughout her life.

In 1645, twenty-year-old Armegott was wed to Johan Papegoja (John Parrot), who arrived in the colony with the permission of his overlord to marry the young lady in question. Papegoja’s lord was also Johan Prinz’s lord, so I guess there was no room for refusing this match. Two people less suited is difficult to find. Armegott was independent, loud and tall. Johan was somewhat spineless and very much in awe of his wife. It was an unhappy marriage, despite several children. Johan complained loudly that his wife was wilfull and refused to submit to his authority. Armegott merely shrugged, and the Governor chose to turn two deaf ears to the constant discord between his daughter and son-in-law.

As per the laws and customs of the time, Johan Papegoja could demand his wife’s total obedience. Women were weak-willed creatures that needed a firm ruling hand to keep them on the straight and narrow – everyone knew that! Well, apparently not Armegott, and while Johan moaned and complained, she went on with her business, thriving like a wayward stand of kudzu in the fertile and somewhat lawless soil of New Sweden.

In 1654, Governor Printz returned home to Sweden, and for a short while Johan Papegoja was Governor of New Sweden. He was replaced by one Johan Risingh and returned to Sweden – but Armegott wasn’t going anywhere, she stayed where she was, ostensibly to manage her father’s estates. I think it was more a matter of her wanting to be free of her husband… Johan Risingh had problems of his own with this formidable lady, viewed by everyone (including herself) as the first lady in the colony. So subversive was her presence to Johan Risingh’s rule, that he sent to Sweden for a wife, begging the government to send out a lady capable of taking Armegott on.

In the event, there was no clash of Swedish Amazons. Long before a suitable lady could be shipped out to Johan Rising, the Dutch annexed New Sweden by force. After an initial bout of severe unrest, leaving Armegott’s residence Printzhof a looted shell, the Dutch take-over was a relatively civilised procedure, with most of the landowners allowed to hold on to what they had. Johan Papegoja wrote at the time that there had been severe unrest, and that Mrs Papegoja had lost a lot of valuables as a consequence, Fortunately, Johan Papegoja went on, two junior Papegojas had made it safely across the seas to him. I suppose this means Armagott was sending her older sons back to Sweden, just in case.

After some initial wrangling as to who owned what, Armegott was allowed to remain in control of her father’s extensive holdings and chose to stay on until 1662 when she sold Printzhof for an impressive sum of money to a Joost de la Grange – some of which had to be collected in Amsterdam.

Off our Armegott went, only to arrive in Amsterdam to find there was no money. She fumed, we suppose, and after a brief visit to Sweden,  where she managed to seriously upset the entire Swedish Church by her refusal to submit to her husband’s wishes and stay with him, she returned to America in 1663, intent on extracting the payment due to her. Things went a bit messy, one could say. There was no money to pay Armegott, and Joost set off to Holland to find it but died en route. His wife, Margaret,  remained in residence in Printzhof, and when the English took over New Netherlands in 1664, she quickly married Andrew Carr, hoping that his English status would protect her claim to Printzhof. Huh. Margaret seriously underestimated Armegott, who just wouldn’t give up, like a huge overweight terrier worrying at a bone.

Years passed, Armegott hung on, over and over petitioning for her money – or for Printzhof, in lieu of unreceived monies. She also established an inn, a distillery, and in general made a good life for herself. In the meantime,things were not always peaceful sailing for the new colonial overlords. Some of the Swedish and Finnish settlers resented the imposed Anglification, and even more so when a certain Captain Carr, Andrew’s brother,  tried to enrich himself through various manipulative schemes, most of them directed against the natives, who until now had lived on friendly terms with the white settlers. Carr also had hopes of getting his hands on the prime land along the Delaware River, but to do so he had to oust the Swedes and Finns, and these, like barnacles, refused to be budged. 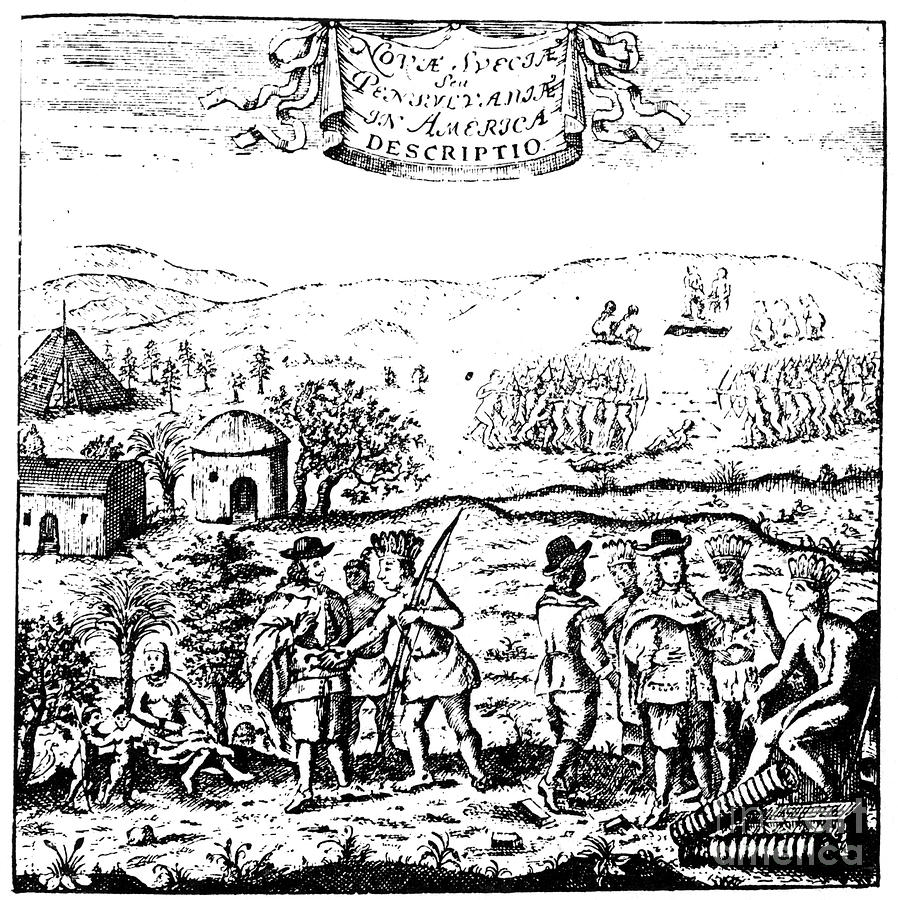 It seems somewhat propitious that in this somewhat tense climate, there should suddenly arise a rebellion. One could almost suspect lurid manipulation behind the scenes, causing a man known to history as the Long Finn to raise his voice in loud protest against the English. This supposed Finn was named Markus Jakobsson (sounds Swedish, if you ask me – but many Finns had Swedish roots) and in 1669 he urged his fellow Swedes to rise in rebellion and throw the English out of New Sweden.

The hero of the hour was Captain Carr (hmm) who nipped the planned insurrection in the bud. Markus Jakobsson was hauled before the court, accused of treason, and was condemned to die. However, his sentence was commuted to public flogging, a branded R on his cheek and lifetime servitude as a slave on Barbados. Not so sure that was a winning ticket for poor Markus, who apparently had had a previous encounter with English justice, at which point he’d been sent out to Maryland as an indentured servant. Markus boarded a ship destined for Barbados in 1670 and sailed out of history. What befell the man afterwards is pure speculation – but I suspect it wasn’t much fun…

Armegott was accused of participating in the rebellion. “Proof!” I imagine her snorting. There was no proof, and Armagott was let off with a slap to her wrist, no more. However, the incident seems to have left Armegott somewhat disenchanted with the whole colonial experience. She increased her efforts to have her claims to Printzhof validated, and in 1672  it was finally returned to her, now a substantially less impressive place than when she sold it back in 1662.

In 1675, Armegott sold Printzhof and sailed back to Sweden. She was to live out the rest of her life ambulating between the various households of her children, dying at the ripe old age of seventy.

8 thoughts on “An Amazon in the colonies”