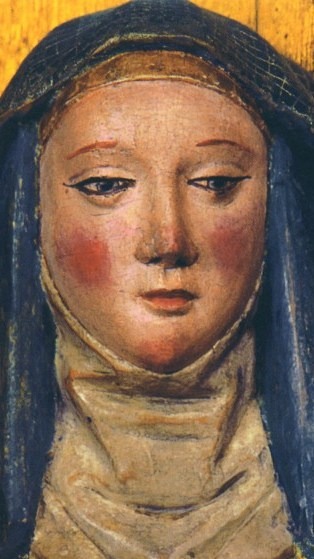 Sweden only has a handful of saints. Given that we’ve been Protestant since the 16th century, and given that Sweden was a most remote country in the Middle Ages, on the fringes of the European world (well, to some extent we still are, stuck up here in the north with a total of nine million inhabitants in a HUGE country mostly filled with woods, water, moose – very many moose – more woods and a handful of cities that would barely qualify as towns in China or India), maybe that’s to be expected.

But we do have one rather famous saint – one of Europe’s patron saints no less, namely St Birgitta. And maybe St Birgitta is just the saint we deserve, being an opinionated, brash and political female. No one has ever accused Birgitta of being mild and meek – this is after all the woman who sat by her husband’s death bed, fingering her wedding ring, and even before he’d expired she’d yanked off his ring, eager to embrace her new life as a nun – or maybe that was her way of handling loss, who knows. This is also the woman who nagged and nagged at the Pope, comfortable in his exile in Avignon, until he finally stood up, threw her a baleful look, and moved back to Rome. (Not for long. Political matters forced him to return to Avignon, but at least Pope Urban V tried – not sure Birgitta gave him all that much credit for that.) 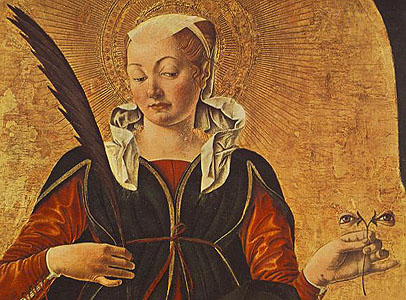 If you ask us Swedes, we’d much prefer to have f.ex. St Lucia as our national saint. Not about to happen, as St Lucia was born in Syracuse, Sicily, and never even heard of Sweden. And yet, St Lucia’s saint day is a big thing here in Sweden, very, very big. As to why – well, why not read my post on her? Instead, let us get back to our saint of the day, “fire and brimstone” Birgitta

Birgitta was born into an affluent Swedish family, in the region of Sweden that was relatively civilised already by the 14th century. At this time, Stockholm was a sad place consisting of three houses and a pigsty (okay, okay; somewhat exaggerated – there’d be a church as well, and a primitive fort). No, the real power in Sweden in the 14th century resided to the south of Stockholm, in Östergötland. This was  fertile land, cultivated since the days of Vikings, and accordingly the landscape was dotted with rune-stones, churches and royal palaces. Well…palaces may be stretching it a bit, but royal residences, barn-like buildings that were sufficiently stout to keep out most of the wet and cold. 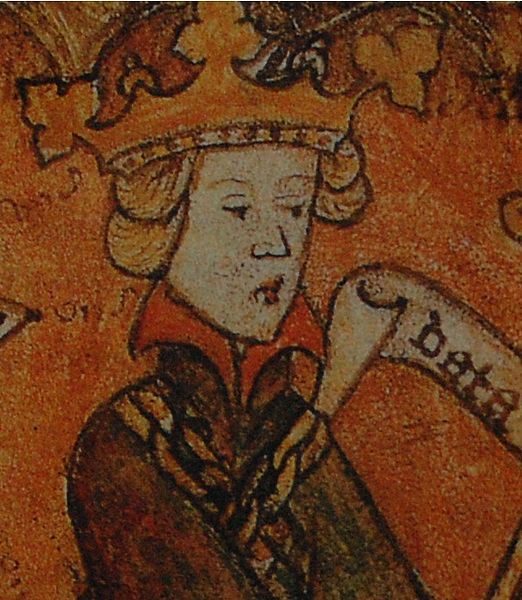 At the time in question, Sweden was an embryonic national state, constantly at war with Denmark – and generally losing these eternal skirmishes. The king, Magnus Eriksson, came from a relatively junior royal family – they’d only been on the throne a mere century or so – but they made up for their lack of seniority by providing a bloody reality TV show, the more recent events involving a vindictive king and the brothers he threw into a dungeon to starve to death. Nice guy… Anyway, all this fratricide led to brief lives, which is why Magnus was a child of three when he became king.

Birgitta was already from the start convinced she was meant for great things – like pestering popes and kings. She showed an early interest in all things religious, but despite her desire to follow a religious vocation, she was married off at 13, to Ulf Gudmarsson. It seems to have been a happy marriage, two young people who treated each other with devotion and respect. It was also a fertile marriage, as the couple had several children, one of which was destined to follow in her mother’s footsteps and become first a nun, then a minor saint. (Imagine that; two saints in the same family!)

While Birgitta comes across as quite the harridan in her dealings with her king and queen, ( she accused the king of being weak, of being homosexual, of being unfaithful, and to further spice things up then went on to accuse the queen, Blanka, of also being unfaithful – with her husband’s purported lover) it seems she was genuinely devoted to works of charity, mostly directed towards unwed mothers and their children. For a woman raised in one of the most powerful families in the realm, who lived in a surprisingly equal relationship with her husband and who was possessed of a keen intellect, I suppose the temptation to meddle in politics was irresistible. After all, Birgitta was quite convinced that she would have ruled Sweden far more efficiently than Magnus and Blanka ever did. I dare say there were days when she probably thought the Holy Father was something of a toe-rag as well, but if so, she was never quite as explicit in criticising him… 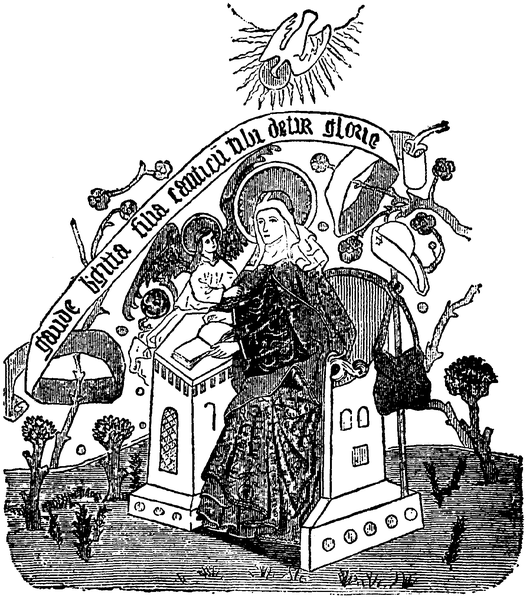 She was probably rather intimidating – especially when she began to have her visions, most of which she could twist into being an allegory of whatever she considered wrong in the present state of things. But she was also genuinely devout, spending hours on her knees as she prayed to God to guide her. I believe Birgitta saw herself as a messenger from God in all things – how convenient that God’s opinions so often mirrored her own. After her husband’s death, Birgitta decided to set up a monastic order of her own, interestingly enough an order of monks and nuns living together under the same roof, albeit in separate parts of the convent. (This is how we know for sure Birgitta was Swedish, all for advocating equal opportunities – and mixed gender housing –  long before the concept was invented. Although, to be fair, there are a couple of other orders that allow mixed genders)

The king of Sweden decided to bribe Birgitta – or maybe he was motivated by religious fervor, although I have serious doubts – by promising to endow her with his best palace and surrounding lands so that she could create the order she so ardently desired. If he had hoped that his gift would silence her sharp tongue, he was to be disappointed, but at least he succeeded in directing her considerable energy elsewhere, to actually setting up her order and having it confirmed by the pope, thereby buying himself a respite from her hectoring. 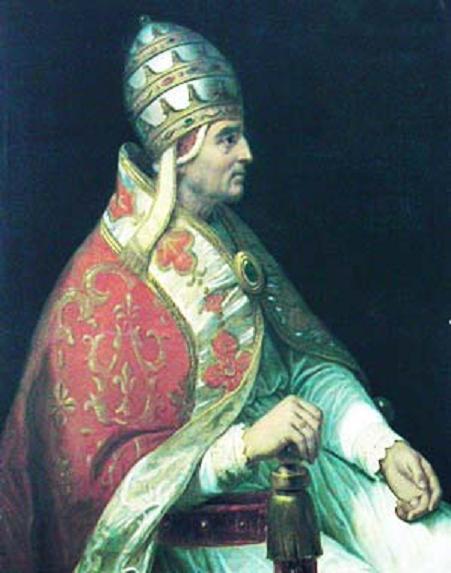 Even better, from Magnus’ point of view, Birgitta left Sweden in 1350, off to visit with the Pope about the burning issues of confirming her order and moving the papacy back to the holy city of Rome. Off she went, riding through a Europe ravaged by the Black Death. Not that Birgitta was an untried traveller, by the standards of the age she was quite the globetrotter, having already been on extensive pilgrimages. She never returned to Sweden, settling down to do God’s work in Rome, where she became universally loved for her kindness to those that truly needed it.

That is the thing about Birgitta; tough as old boots when dealing with the powers that were, most of them men, but loving and supportive when helping the young and the ill, the poor and the hungry. Add to this her spiritual fervour, her perseverance in issues close to her heart, and we have quite the mover and shaker, a woman burning with pathos for the more unfortunate. 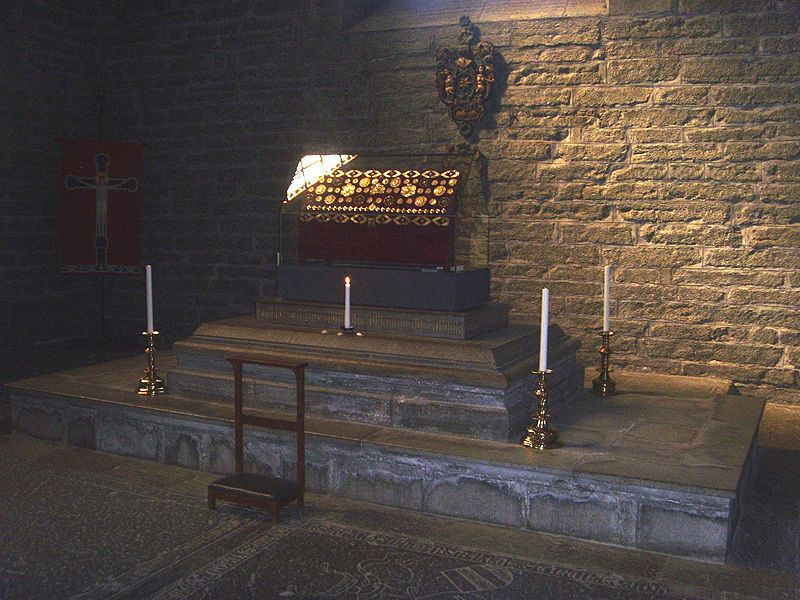 Birgitta died at the ripe old age of three score and ten, in 1373. She died in Rome, far away from her home, and she was never to see the magnificent Brigittine convent of Vadstena, housed in the palace bequethed to her by king Magnus. But Birgitta wasn’t a lady who took anything lying down. She might have died in Rome, but she wanted to be returned home, and as the story goes she commanded her body to be boiled free of flesh and tissue so that her cleansed bones could then be transported home to Sweden. “Much better that way,” she probably said. “It would stink too much otherwise, and besides, why lug around a corpse that will anyway rot?” Pragmatic to the end, our St Birgitta – a quality us Swedes hold very dear. To this day, those boiled bones of hers lie in a reliquiary in her convent – most unusual in a Swedish church! 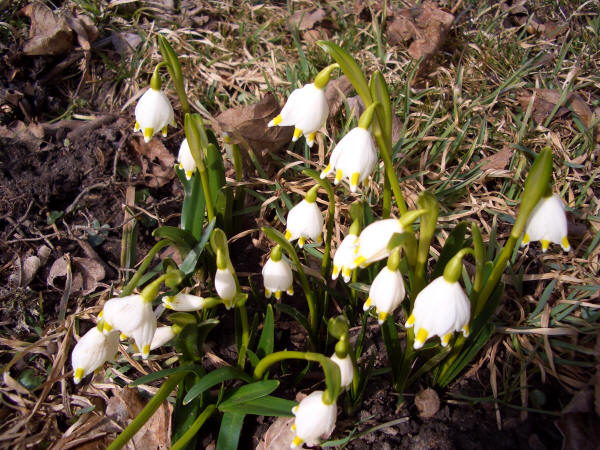 Today, the former convent is a hotel – and quite a nice one if you enjoy historical locations and breakfasts in “monastic” refectories. Side by side with the convent church and the remaining convent buildings lies the walled medieval convent garden – and in late spring the grass is dotted by the heavy heads of Leucojum Vernum. While elsewhere this plant is known as Spring Snowflakes, in Sweden, we call this flower “cloister lilies”, and nowhere are they as plentiful as they are in Vadstena, in the garden of the convent founded by a woman who had no time for life’s little fripperies – not when kingdoms had to be reorganised, and popes be chided back to Rome. But I think Birgitta would have liked the lilies – just as she would have liked that there is a community of Brigittine nuns living in Vadstena.

In Sweden, the Reformation did away with the idolation of saints, and Birgitta was consigned to the spiritual garbage heap, dismissively labelled as an “interfering woman” by the Protestants. Did Birgitta meddle? Oh, yes! Was she insignificant? Most certainly not!

13 thoughts on “A tough cookie – meet St Birgitta of Sweden”