Today it’s Midsummer’s Eve. Well, if we’re going to be finicky about it, Midsummer’s Eve is on Monday, but due to practicalities and adaptation to the modern times we live in, the powers that be have decided Midsummer’s Eve always falls on a Friday – at least here in Sweden.

Midsummer is a BIG thing here. Very, very big. The pagan in us rears its head and off we go to hop like frogs around the maypole (although we call it a midsummer pole), do intricate folk dances involving hand clapping and stomping, twirls and little bows. All very picturesque, harking back to the dimmer parts of our history, all the way to the tenth century and beyond when Christianity was an eccentric oddity reserved for the lily-livered amongst us and most men and women of vigour and courage still prayed to the old gods – gods that now and then required blood sacrifice.

Midsummer is a rather carnal affair, and until recently late March was the peak month for births – no hanky-panky without consequences, right? Of course, a Midsummer’s Eve in northern Europe is a very sensual thing. The light lies trapped along the horizon for most of the night, dipping the entire creation in delicious hues of purple. The grass is green, the air is suffused by the scent of honeysuckle and dog roses, of viburnum and chamomile. In the distance a fiddler is playing, not the energetic folk music that recently had your legs twitching, no this is a sadder melody reminding us that today the year turns and soon these magical nights will darken and expand, robbing us of long, long twilights and dewy dawns. So when an arm slips round your waist, a bearded cheek rubs against yours, it feels such a waste not to enjoy the moment – after all, winter is coming. Winter is coming… (And just so you know, us northerners have been saying that LONG before the people of Westeros, okay?) 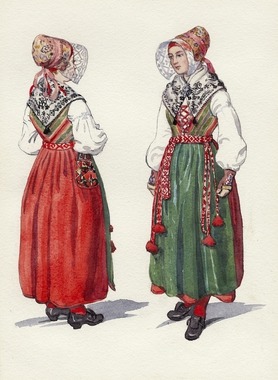 Unless you’re into dressing in folk dress (very fancy, very beautiful, dead expensive and impossible to find unless you’re into sewing and embroidering yourself) Midsummer’s Eve calls for light dresses – preferably white and with ruffles, bare shoulders (unless it’s too cold). Not the most practical of colours when you’re planning to smooch a man while rolling around in the grass, but there you are – some traditions must be upheld. If you’re over the “find a man/woman & smooch” phase – like if you’ve been married for a quarter of a century – then you can bloody wear what you like as this evening is not really for you anyway. Being of a practical bend, I like wearing stuff that doesn’t have me turning blue with cold, which on most Midsummer’s Eves translates into jeans and a hoodie or two. 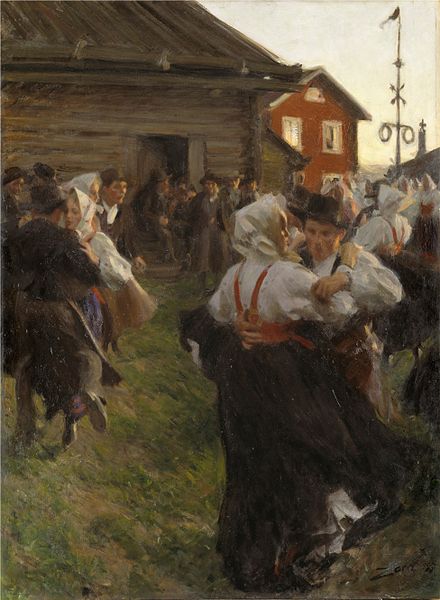 All night the music drifts over the wooden, open air, dance floor. Couples waltz, they stand almost still, disappear for some time and return somewhat rumpled and grassy, and go back to dancing. The night transforms to early dawn around two thirty a.m. and now there’s really no point in going to bed, as it’s already daybreak and anyway that fiddler is doing his thing again, haunting music tugging at your heart, your limbs. A last waltz, a last glass of champagne as the sun breaks through the veils of morning mist and the fiddlers pack up their instrument as the birds begin their morning chorus. Hand in hand, a man and a woman walk through meadows that leave trails of dew on bare legs and skirts. Every now and then the woman stoops to pick a flower. He laughs, bends to help her in between caressing her hair, her shoulder. She bats of his hands; this is serious business, she has to collect seven (in some parts of Sweden nine) different flowers before the night is truly over.

With a bedraggled bouquet in her hand, the woman walks the last few metres to her door. He kisses her and dips his head to whisper “Sweet dreams” in her ear.
“Dream of me,” he adds as he walks away.
In response, she lifts the bouquet to her nose and inhales. “I’ll try,” she says. On bare feet she makes her way to the bedroom, places the flowers under her pillow and falls into the bed. She turns on her side and smiles, thinking this was quite the Midsummer’s Eve. She closes her eyes, her body grows heavy with sleep. The flowers under her pillow are supposed to make her dream of the man she’s destined for. And if she’s lucky, this night she’ll dream of him, the man she’s been dancing with all night long, the man with warm hands and a soft mouth, the man who kissed her so passionately less than an hour ago. Let’s keep our fingers crossed that this young woman does, that in her dreams her evening beau is confirmed as Mr Right.

Of course, all of the above assumes it doesn’t rain on Midsummer – which it does quite frequently…

Winter is coming, winter is coming… But tonight I’ll sit in the balmy evening and eat herring and strawberries, I’ll laugh when my man invites me to dance and waltz slowly over the lawn with him. For some hours more, I’ll pretend we live in a bubble of trapped light, a bubble of warm summer nights, of midgets and flower scented breezes. Winter is coming. But tonight my bare soles are caressed by the soft sweet grass, my man is outlines against a purplish sky highlighted by orange streaks. Winter will come – but tonight it is summer and light, and when I strain my ears I hear the mournful sound of a loon, while from the opposite side of the lake comes the dragging sound of an accordion, playing a familiar summer waltz.

12 thoughts on “Dancing with Mr Right”