I must begin by apologising for the very loooooong radio silence. I do have a valid excuse in that I had surgery in December and then things didn’t at all go as planned. Where I had assumed I’d be up and about after a couple of weeks, turns out I had seriously understimated how long it would take to be back to normal. Well, as normal as I get. . .

For the past few weeks I have whiled away my time re-editing the books in The Graham Saga, this as a consequence of taking over the paperbacks under my own imprint. It was great fun to reconnect with my beloved Alex and Matthew – and it also helped me through my recovery phase. You see, for weeks I haven’t been able to write new stuff – but editing was something I could do.

After having spent so much time with Alex I have concluded that I really, really need to write the next book about Duncan, Alex’s grandson (the first is The Whirlpools of Time). I itch with desire to sink into a WIP briming with time travel, evil men with evil intentions, strong women and, of course, Duncan Melville himself.

I have also reflected a bit about what it is about time travel that I find so fascinating.  Many years ago, I attended a writer’s conference. I has several one-on-ones booked with agents and one of them gave me a bored look and sat back in his chair. The wood creaked, his shirt strained over his padded torso.
“Why the time travel?” he asked. “What’s the point?”
Huh. One could ask that about a lot of genres, IMO. Why Sci-Fi? Why Fantasy? Why all those werewolf and vampire novels? I guess those who write any of the previously mentioned would reply that they write what they love, what intrigues them.

The same goes for me and time travel. The concept is mindboggling, and even if by now I’ve given up on it being possible—Stephen Hawkins sort of nailed the lid down on my hope by pointing out that if time travel were at all to become possible, by now we’d have people from the future visiting us. The sheer circularity in that makes my head ache. After all, the future hasn’t happened yet, so there are no people there to travel back in time, and. . .

In A Rip in the Veil, Alex Lind falls over three centuries back in time to land at the feet of Matthew Graham in 1658. For Matthew, the future has as yet not happened, and yet here she is, this woman who tells him she was born 1976. It makes him itch all over. It also makes him worry that this entrancing woman might be some sort of witch. Not that he is entirely sure he believes in witches, but there is something very, very strange about Alex’s plunge through time. Impossibilities, in Matthew’s world, are either divine miracles or black magic.

I suppose we would all react with a certain wariness were we to come face to face with a time traveller, right? And our first reaction would be incredulity. “Poor sod: he needs help, ASAP.” 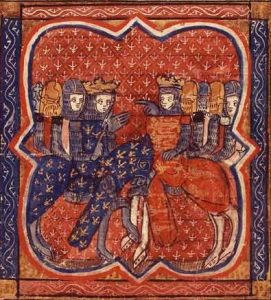 Back to my fascination with time travel. As a child, I conducted various experiments in the hope of somehow transporting myself backwards in time. I had my heart set on the twelfth century—more specifically on Richard the Lionheart’s reign. Even more specifically, it was at Richard’s feet I wanted to land, riding with him as he set out on his adventures.

My experiments involved midnights, lit candles set in various formations, the consumption of pilfered whiskey (Ugh! To this day, I can’t bear the stuff) and a lot of chanting in—wait for it!—German. Not that I knew any German, but I had hold of my mother’s old German grammar and read aloud from the pages and pages of verb declinations. To this day, I think things would have gone better had I instead used her Latin grammar.

My various attempts to travel through the veils of time came to an abrupt halt when, one night, my father yanked open the door to my wardrobe (I had to conduct my ceremonies in secret) and was so shocked his voice rose into a squeak as he realised that his idiot of a daughter had been lighting candles among all her clothes. Yes, yes: he had the right of it, of course, but an idiot I was not—not then, not now. I was simply gifted with an extraordinarily vivid imagination. To my father’s credit, he apologised for the idiot, but told me that he would give me the spanking of my life if he ever caught me doing something that foolish again.

He never did spank me. Instead, he spent hours making me beautiful wooden swords, shields, helmets—everything I could need to indulge in my fascination with medieval times without attempting to distort the flow of time.  It is one of the few times I recall truly bonding with my father. He was a very talented artist but spent his days running a large business. I think all those hours carefully shaping my sword did him good, and when he decorated my shield with heraldic lions he hummed under his breath while I sat beside him and shared everything I knew about dear Richard.

These days, I’ve reassessed Richard. Yes, he was flamboyant and capable and brave, but he wasn’t much of a king—at least not to the English, whom he mainly seems to have seen as a source of the money he needed for his ventures abroad. But whenever I’m in London, I detour by the statue of him outside Parliament, just to say hi. 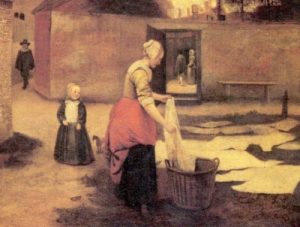 When I started to write, I knew that at some point I would write about someone who fell through time. That’s the benefit of being a writer—I can indulge myself.
“Thanks very much,” Alex says, glaring at me over the huge cauldron in the laundry shed. The air smells of lye, of damp linen and sweaty women.
“Hey, if it hadn’t been for me, you’d not have met Matthew.”
“Maybe I’d have been happy anyway,” she retorts.
“You think?” I shake my head. Content, maybe. Happy, no.
She sighs and rolls her eyes before muttering that maybe I’m right.

Other than wanting to treat myself to some time travelling by proxy, there was another reason why I wanted my female protagonist to be a time traveller. As I told that agent, having a modern protagonist in a historical setting allows for much more commentary. A woman born in the 1630s will not react to the food she eats, the clothes she wears—of course not, as they’re familiar. But having my readers experience the 17th century through a fellow modern woman gives me the opportunity to really submerge them in the past.

Details a woman of the times would not even think of mentioning, Alex most certainly does. Like when she realises that unless she asks—and pays—for clean linen when staying at an inn, she’ll be expected to sleep in the well-used sheets. Also, if she doesn’t pay extra, she’ll likely have to share her bed with someone.
“Mostly me,” Matthew says.
“Yeah, well, I don’t mind sharing with you,” Alex says. “But Mrs Gordon. . .” She groans theatrically. “She snores like a horse!”

Alex also offers me the opportunity to comment on how restricted women were in the 17th century—at least legally. It is my personal opinion that women have often overcome these restrictions by being a powerful mover and shaker behind the scenes—like in their homes. But still: officially, a 17th century woman was chattel, accorded no rights beyond those extended to her by her husband.

Writing a time travel story does not preclude hours and hours of research. To some extent, the research becomes even more important, as it is in the small details—like how the tallow candles leave streaks of soot, or how the rope frame of the bead creaks and groans—that I truly transport my readers to Alex’s new reality. 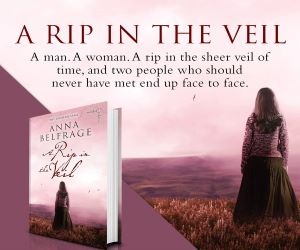 When I started writing what was to become A Rip in the Veil, I was very much into the history of the times. 1658 is the year Oliver Cromwell died, thereby leaving the Protectorate rudderless. Charles Stuart—soon to be Charles II—now had a window of opportunity to reclaim his kingdom, and he did. My original story centred very much round Matthew, a disillusioned Covenanter who finds it hard to stomach that everything he suffered on behalf of the Commonwealth and the ideals of the Parliamentarians is to be ground to dust under the elegant, high-heeled boot of the returning Stuart monarch.

Don’t get me wrong: it wasn’t a bad story, but the moment Alex Lind popped up in my head in tight leans, a bright red jacket and that mop of short curls, I just knew that somehow she belonged with Matthew.
“Aye,” he says simply, smiling as he watches his wife—now in long skirts and with a coif covering her hair—dancing about in a sunlit clearing in the woods. “I needed her,” he adds. “So, so much did I need her—and I didn’t know it.”
I smile and lean forward to pat his arm. “That’s what us writers are for,” I tell him.  “To, you know, make the impossible happen.”
Matthew snorts. “Begging your pardon, but you only wrote what the good Lord had ordained.”
Well, I’m not about to launch myself into a religious discussion with my obdurate and very devour Presbyterian protagonist. “So she’s a miracle then?” I ask.
“Aye.” He smiles. “Not a witch, at any rate.”
Phew. Being labelled a witch in the 17th century was not a good thing
“She has changed me,” he says quietly. “She has made me see the shades of grey between the black and white.” He laughs when Alex makes an odd little caper. “Not that she’s grey, my miracle lass.”
Nope. Whatever else one might think about Alex, she is deffo not grey. She may no longer have that red jacket, and her skirts are a dull brown, but Alex vibrates with life, arms flung wide as if to embrace life. A new life, a new man, a new time.

I think it is safe to say that I will write other time travel stories (Duncan’s and Erin’s story has already begun) I have this rather vivid imagery of Alex’s mother -the true witch in The Graham Story – sent to land in the early 14th century in Scotland. Not easy for a Jewess from Seville. And then I have Simon and Cornelia who somehow end up right  in the middle of the Battle of Tewkesbury.
“Somehow?” Simon growls. “It was her fault. Hers!” He points at Cornelia. “She pushed me.”
Which Cornelia most certainly did. I guess she didn’t count on getting dragged along to the turmoil of the fifteenth century. Question is, who is best at adapting to new circumstances, Simon or Cornelia? Well, I’ll have to write the story to find out!