Some weeks ago, I was at Marstrand. Most of you have never heard of this little Swedish gem, but should you ever make it to Sweden, I would recommend a visit. An hour or so north of Gothenburg, Marstrand was once a heaving, bustling place, an important harbour city that thrived due to the herring. Herring was a staple of medieval life—consider all those days when you were not allowed to eat meat, and you realise why. It was fished, salted and barrelled and then shipped out to the rest of the world—well, Europe—and places like Marstrand experienced a financial boom as a consequence. Until the Dutch invented the herring ships and took over, but that wasn’t util the late 16th century or so.

Marstrand still heaves and bustles—during the summer. During the winter, it’s a somnolent little place, the entire town overshadowed by the huge fortress, Carlstens Fortress. This imposing structure may look old like the hills (in some parts) but was actually not built until after 1658, when this part of present-day Sweden was finally wrested from the Danes. (See my recent post about Karl X Gustav and his antics on the ice)

“We need a fortress here,” King Karl X Gustav said. “Those bloody Danes can’t be trusted. Give it some years and they’ll do their damnest to take all of this back.” He gestured at the archipelago surrounding him. “Can’t have that,” he added. Which is how the Swedes scouted the surrounding area for old, unmodern medieval fortifications and castles, tore them down, and transported all those stones to Marstrand, there to build Carlstens Fortress.

Thing is, the slope up to the building site was steep. Very steep, as you can see from the picture above. No one volunteered to help drag the heavy stones all the way up there. Workers were suddenly very busy elsewhere, because anyone with half a brain realised moving all that stone up the hill would be a major, major undertaking, resulting in aching backs and whatnot.

“Hmph!” the king said. He tapped his mouth, thinking. “I have it!” he exclaimed, and just like that, the penal code in Sweden was revised, so that now there was a new punishment: hard labour at Marstrand. For a couple of years, every single criminal ended up there, were he a murderer or a thief, it didn’t matter: as long as the men had arms and legs, they could move stone, and who cared if they died along the way? These were bad apples, the whole lot of them, and the world was a much better place without them!

To ensure the prisoners did pull their weight, they weren’t given any food. Instead, at the end of each day, one of the guards would assess how much they’d worked and pay them a small amount. Enough to buy food and maybe some firewood if they were lucky. If you didn’t work, you didn’t eat, and the emaciated bodies of those unfortunate to sicken and thereby starve were quickly buried, their space on the sleeping platforms soon filled with new, stronger men.

Obviously, the prisoners were kept on a short leash. Like most prisons at the time, Marstrand offered little in the way of comfort—but quite a lot in the way of discomfort. Like a varied selection of punishments, ranging from being flogged to having your tongue cut out or, for the truly hardened cases, being put in the Iron Crown. The Iron Crown was a collection of chains and fetters. A collar round your neck, a heavy band round your waist, manacled round wrists and ankles and heavy, heavy chains. In total, the contraption weighed around thirty-eight kilos.

Just because you’d been decked out in the Iron Crown, you did not get a pass from work. Nope. You wanted to eat, you worked, dragging not only all that heavy stone, but also all that iron. People could be put in the Iron Crown for a day, a week, a month—and in one case, for fifteen years!

Anyway, our X was a very strong man. He was originally also a very happy man—in love with a young woman who’d promised to become his wife. But one day, when he came home earlier than expected, he caught his betrothed in bed with another man. So angry was he, he lashed out. His strength was such that a couple of blows left the scoundrel dead. Oops. Our happy strong man was now a murderer and was sentenced to Marstrand—after all, look at all those muscles! He’d make an excellent addition to the work force.

X seethed. He felt all of this was unfair, and the first thing he did when he arrived at the dismal prison was to loudly declare he had every intention of escaping. Foolish, foolish X!
“Really?” the commandant drawled. “Well, we can’t have that, can we?” And so, our unfortunate X ended up in the Iron Crown. He wore the chains and fetters 24-7 for fifteen years. He slept in them, worked in them, ate in them.

And then one day, the ice settled round the island of Marstrand, and stuff had to be dragged across the ice from the other side. Rather thin ice, and as X was deemed one of the strongest men—ergo necessary for the venture—the decision was taken to free him from his chains so that he could work without the risk of drowning.

For the first time in years, X was unencumbered. I can’t quite imagine how that must feel, but I suppose after all those years dragging thirty-six kilos around, his joints and back had taken a beating. Still: he could move, unhindered. No sooner was X on the ice but he ran. After him came the guards, but the ice groaned and cracked, and they skidded to a halt, watching as X somehow managed to scuttle across to one small island, then another.

“Freedom!” X may have hollered, channelling an inner Mel Gibson. At last, he’d stepped out of the tunnel and into the light, and he may have stopped for a moment or two, turning his face up to the sky. And yes, he was free, but he was dressed in rags, and it was very, very cold, and he had no money, and how was he to get away? Worries for another day: for now, X savoured the fact that he was running, that the island of Marstrand was shrinking behind him.

Unfortunately for X, his freedom was short-lived. Some days later he was captured and brought back to Marstrand, where the smirking commander ordered him to be put in chains—for the rest of his life. This time, something broke in X. The first opportunity he had, he clambered atop the walls and threw himself to his death, chains and all.

Sad, isn’t it? Even sadder that we don’t even know his name. The reason why his story is remembered is because one of the prison guards felt sorry for him, and regularly wrote home about poor, poor X, calling him Prisoner 91Kleist. No such prisoner is on record, and the thinking is that the guard on purpose used a false name—for his sake and the sake of the prisoner. 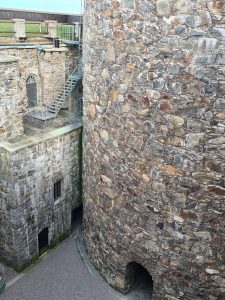 Visiting Carlstens Fortress on a balmy August day does not detract from the looming walls, the dark little cells, and the ambiance of desperation that reeks from some places. This was built with hard, hard toil by men who very often died, worn out shadows of their former selves. 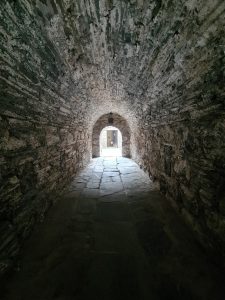 And when I stand gazing through the gateway that tunnels through the thick walls, I cannot help but think of X, of how often he must have dragged himself by this and seen that enticing little light dancing at the other end. Unfortunately, sometimes, the light winks out, leaving us with crushed hopes and  in permanent darkness. That, I think, is what happened to X when he was recaptured.