All writers have some sort of muse. Some call it their “mojo”, others – especially if they’re Spanish-speaking – may call it “duende”.  Some writers don’t have a name for this invisible presence that sometimes breathes VERY heavily down their neck. Me, I call my muse Ms Inspiration. I envision a lady of multiple contradictions: Ms Inspiration wears tight, black long-sleeved tops and sweeping, floral skirts that I’d love to wear but try to avoid as I can’t quite make them work. Long hair neatly pulled back into a bun – but one naughty curl caresses her cheek, and the softness of her mouth stands in stark contrast to the assessing look in her eyes. Ms Inspiration would be very beautiful had she not had a huge nose. (Ow! Don’t pinch me!) She has kohl rimmed eyes that I am very jealous off, but no matter how often I try this look out on myself the end result is always that of a panda with a severe case of allergy – i.e. not the wished for effect. She’s fond of leather, my Ms Inspiration, as evidenced by the black leather boots, the distressed leather jacket – and the horse crop she uses to puctuate what she’s saying by slapping it against her boots. Or my head, when she finds me too obtuse.

Ms Inspiration is not much for coddling. When I complain about things not going as I want them to, she’ll just shrug and tell me to work harder.
“Goals are not achieved by whining,” she tells me. “They’re achieved by doing!”
Well, duh: she has a point. I’ve lived by that mantra for most of my life.  (And yes, I am fully aware that Ms Inspiration is a fictional embodiment of my own subconscious, just in case you were worried) .

Sometimes, when I am drowning in a deluge of new ideas, Ms Inspiration dons the general’s hat and helps me sort and filter. Other times, she’ll sit on my shoulder (yes, she can skrink when she so desires. Or become alarmingly big when she feels that is required) and cheer me on, making the odd appreciative comment as my story unfolds.  Mostly, though, it is my firm opinion that Ms Inspiration is in charge of floating new ideas, new twists, new intriguing eras/characters/settings. Essentially, I expect my muse to deliver. Repeatedly. Why else have her? Ooops: I shouldn’t have said that: the look Ms Inspiration throws my way promises severe retribution… 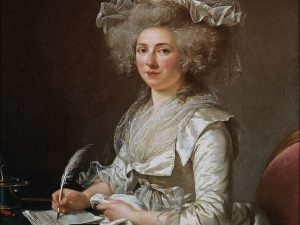 Recently, Ms Inspiration has not been much help. Not so that she doesn’t spout ideas – she most certainly does, especially around three o’clock in the morning – but her attention span lately is the size of a newt’s, which means none of the ideas go much beyond an image or two. It’s very annoying to have her leapfrog from a (great) idea for a plot twist in my 13th century WIP to a vague daydream about becoming a hammer thrower and winning the Olympic gold in 2024. (This is the aftermath of having watched too much sports lately. Ms Inspiration has sadly concluded that I can neither run nor do handstands, so throwing something is the single option that remains.)

Mostly though, Ms Inspiration is presently suffering from indecisiveness. What she touts as a plausible idea on Monday is a dead duck on Tuesday, and the fabulous love scene she painted for me on Wednesday she scraps on Thursday, saying that “it wouldn’t work.” Besides, she adds with a dramatic shrug, she’s thinking maybe I should do some dark realism.
What? No, no, no, no, no! I don’t do dark realism, I have enough realism in my life anyway, thank you very much – especially right now! I do escapism, stories about men and women in other times and other places who confront all sorts of adventures and scary stuff but still, somehow, reach their promised sunset. (Albeit the worse for wear at times…)
“The love scene is much more my thing,” I tell her. (And it is; I do good love scenes, peeps. I expend a lot of time researching this topic 😉 )
“I told you; it wouldn’t work,” she snaps.
“Why not?”
“He’s already married,” she informs me. (A big stickler for morality is Ms Inspiration. I’m pretty big on morality as well – and on consent, always consent – but Ms Inspiration can be downright prudish at times. Leads to some very heated discussions, let me tell you)
“We can unmarry him,” I try. “He’s not real.” Not yet, I mean. Once I start writing about this as yet unknown male, he very quickly becomes very real.
“To me he is,” she says. She curls her mouth. “I don’t like him.” And poof! just like that she has this as yet unformed character wink out of existence. Huh. I rather liked his feet (didn’t get to see much more than his feet and his eyes)

When she’s in the mood, Ms Inspiration sees stories in everything. I walk by a lame dog, and Ms inspiration whispers a little story about how the dog injured his hind leg while defending the family’s baby against the fierce attacks of a wolf. (Well, I didn’t say all her stories are good and original…) Loitering by the railway station is a young man with tattoos and long, dirty hair. Ms Inspiration sees an eco warrior, a person who has sacrificed everything to fight for his convictions, and along the way he’s fallen in love with a Somali goat herder who has escaped her father and is scraping a living in Patagonia. (“Patagonia? how would a Somali woman have …” “Details, schmetails. You sort the logistic issues,” she says, waving a hand at me.)

She leans over my shoulders as I do historical research, and suddenly she stabs a finger at a name.
“Him, him! Madog! Yes, we can definitely do something with him!” Which is why my planned Castilian trilogy is now a soon-to-be quartet, as Madog explodes onto the historical scene in 1294, and presently I’m in 1288 in book #3. She glosses over other historical figues, dismissing them with a snort if she doesn’t find them interesting enough. For some time, she’s been eyeing William Wallace, but I’ve told her no, no, no: I will not go there. So now she’s suggested we go back to medieval Castile and tell the story of Alonso Pérez de Guzmán. Hmm. Maybe. At least there’s enough drama in his life to make things interesting, but I don’t want real peeps as my protagonists.
“So we go a bit wild and crazy,” Ms Inspiration says. “You could throw a time traveller into the story.”
I am not entirely convinced.
“Or a Moorish maiden who has somehow been carried off from her family and now finds herself alone and unprotected in Sevilla.”
Maybe.
“Or wait: we can tell the story of Alonso’s great-niece. You know, the one who…” She makes a series of strangled noises, hands around her neck.
Yeah. That we could do, with an invented confidante of poor Leonor as the protagonist.
“Or…” Ms Inspiration taps her mouth. “A thriller. Kick-ass heroine sets out to wage war on the baddies of this world.”
Oh, yes! I like kick-ass heroines – have always dreamed of being one myself. “Contemporary?” I ask, wondering whether I could maybe sneak in some paranormal stuff. Ms Inspiration gives ma languid wave. “Don’t know.” She shrugs. “Frankly, now I can’t quite recall what my idea was.”
Grr! As I said: attention span of a newt!
She brightens. “Or we could do the one about the dog and the woman in the pond.”
“What woman?” Truth be told, what dog?
Ms Inspiration isn’t listening. “And then there’s that Tudor story…”
“No, no no! Not Tudor. Never!” (because seriously: all that research????)
Ms Inspiration does a couple of salsa steps. “I know, I know! Erin and Duncan! And there’ll be a cantankerous pirate involved.”
Hmm. I feel myself sag down under the sheer weight of all these half-baked ideas.

But hey: Ms Inspiration may be contrary and opinionated, loud and impossible to manage. There’s no turning her on, and there’s not an “off” button in sight, but ultimately Ms Inspiration is my driving force, my very own creative genie. Without her I would be diminished, all those words that sort of bubble out me drying up into a meaningless trickle.
“Huh,” Ms Inspiration snorts, but I can hear she’s touched. (Besides, she’s wiping that giant nose of hers, and her eyes glisten suspiciously) “You’re only saying all that because you need my help.”
Absolutely. But why tell her so?
“Now, about that love scene,” I say instead. And this time Ms Inspiration delivers, oh boy does she deliver.