Sometimes, I stumble upon my protagonists by chance. Like when I came upon the fate of Teresa while researching my post from last week, about García Fernandez and his beautiful hands. Now, when talking about Spanish history, there is one Teresa that towers over all the others, namely St Teresa, this charming and erudite holy lady who heard Jesus while cooking and who, supposedly, had the most beautiful ankles. However, today is not about Santa Teresa. No, today’s Teresa was equally devout but her situation was somewhat more precarious. (Santa Teresa would have you know her situation was pretty dire at times as well…)

In the last few decades of the tenth century, present day Spain was neatly divided between the mighty caliphate of Córdoba and a handful of small Christian kingdoms, doing their best to hold on to their lands. The caliphate of Córdoba had a caliph, Hashim II, but this young gent was effectively controlled by his mother, the rather enigmatic Subh, and a certain Almanzor, who was ever Subh’s loyal servant. Well, until he no longer was, but that has no bearing on today’s post. 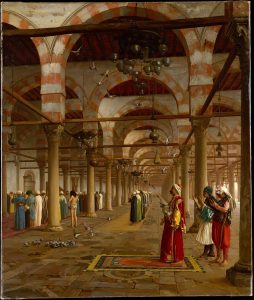 Almanzor (whose real name was Abu ʿĀmir Muḥammad ibn ʿAbdullāh ibn Abi ʿĀmir al-Maʿafiri – the much shorter Almanzor means “the victorious”) was an accomplished man. Well-educated, ambitious and quick-witted, he was soon more or less in charge of running the caliphate. Administration, finance and war: if things needed to be done, Almanzor was your man. He combined his capacity for decisive action with a deep and genuine faith, which may be while he labelled most of his campaigns against the Christians as jihad.

Now, obviously many Christians saw the Muslims as enemies and vice-versa, but by the end of the tenth century, there had been Muslims in Spain since three centuries back. There were Christians living under Muslim dominion, there were Muslims in Christian kingdoms. Learned men from all faiths—Muslims, Jews and Christians—exchanged ideas and learned from each other. There were cases of Muslim women marrying Christian men, of Muslim men taking Christian brides. Obviously, all this interaction created a certain fluidity regarding who was your enemy and who wasn’t. A Christian king could well ally himself with the Muslims to defeat another Christian king. Yes, he’d have his priests screaming about everlasting hellfires and plenty of brimstone, but ultimately, a good regent had to be practical: having a strong ally was better than having a weak one, even if the stronger ally happened to bow to Mecca five times a day. 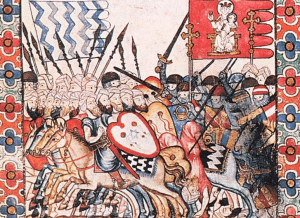 In general, by the late tenth century, the Christian kingdoms of León and Castile were less inclined to enter into any sort of alliance with the caliphate of Córdoba, having fully embraced the concept of Reconquista, i.e. the movement to reconquer the Iberian peninsula from the invading Moors. (I imagine the Moors of the time would have protested loudly at being called invaders. After all, they were born here, their parents, grandparents, great-grandparents were too.) Other Christian kingdoms were less picky: the kingdoms of Aragón and Navarra were more concerned about safeguarding their own borders than pushing the Reconquista. Therefore, they would often look to the south, and if you looked to the south in the tenth century, you were effectively negotiating with Almanzor, who could be a very strong ally—or an implacable and equally strong enemy. 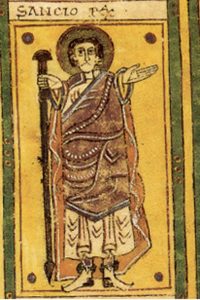 In 980 or so, the then king of Navarra, Sancho II Garcés, was desperate to enter into an alliance with Almanzor. He himself had suffered defeat at the hands of the Moors, and from a distance he watched the Moorish troops ride hard-shod over Castile. Something had to be done to keep the Moors out of his precious Navarra, which is why Sancho set off on a long ride to Córdoba to plead for peace. He brought gifts, of course. One of those gifts was his daughter Urraca, whom he intended to offer Almanzor as one of his wives.

One could think Urraca would have been devastated at being handed over to the “evil Moor”. Clearly, she wasn’t, as no sooner was she welcomed as Almanzor’s wife but she converted to Islam, taking the name of Abda. She embraced her new faith fervently, earning the reputation of not only being very beautiful, but also being very learned and well-read when it came to Islam.

What does all this have to do with Teresa? Well, she too was to become one of Almanzor’s wives. 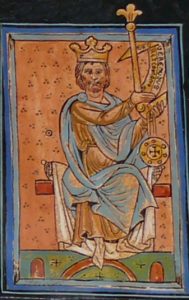 Teresa’s father was Bermudo II of León, and after having most of his lands razed by Almanzor’s armies, in an act of desperation he sent Teresa to Almanzor—as a slave. He probably didn’t have a choice: Almanzor may not have offered an alliance, he offered a cessation of hostilities—but in return he obliged the king to suffer the humiliation of sending him one of his daughters, not as a wife, but as chattel.

By this time,  good Christians did not own Christian slaves.  But giving away your daughter as a slave was apparently OK…Poor, poor Teresa, I say.

Almanzor, however, was not a man to punish the innocent girl for long: soon enough, he manumitted her and married her instead. If this was with Teresa’s consent, or if she was forced into this, we do not know. However, being a wife must have been better than being a slave.

In difference to Urraca, Teresa did not convert. Nope, not Teresa, as imbued as any Leonese noble with the determination to drive every single Muslim out of Spain. (Hopefully, she did not express herself quite as forcefully) Islamic law forbad Almanzor from demanding she do so, and during the years that followed, Teresa clung to her faith, attending Christian services in Córdoba. (And yes, there were Christians living there, had been for centuries) 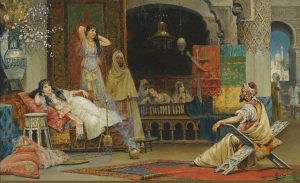 I suspect things weren’t entirely relaxed in the Almanzor household. The man had several wives, some of whom were Muslims by birth. Then there was the fair Abda, something of an in-between in that she had embraced the faith of the Prophet despite being born Christian. And then there was Teresa, who was as fervently Christian as Abda was Muslim. Did they argue? Ignore each other? Did Teresa hiss little insults along the lines of “apostate” or “traitor”?

In 1002, Almanzor died. Teresa was thereby a widow and no one stopped her from returning home, which she did ASAP. No sooner had she set foot on her native land but she took the veil, dedicating the rest of her life to the service of God.

This story about Teresa must, however, be taken with a pinch of salt. While we know Urraca married Almanzor and took the name Abda, while we know she gave birth to a son nicknamed Sanchuelo after his maternal grandfather, Teresa has left no such trace. In fact, it is probably more likely that Teresa never was sent off as a slave—even if the story of her staunch insistence to cling to her faith was very popular among her countrymen. You see, Bermudo II did have a daughter named Teresa, but she’d have been around two when she was supposedly draped in chains. Of course, Bermudo could have had an illegitimate daughter named Teresa who was older or, as some sources indicate, Teresa was, in fact, handed off to the emir of the taifa state of Toledo which means this happened long after Almanzor’s death, as the taifa states arose from the ashes of the collapse Caliphate of Córdoba.

In the Toledo version, it is Teresa’s brother who trades her with the emir of Toledo, thereby hoping for peace. In both versions, Teresa remains devoutly Christian. In both versions, she does end her life as a nun. I think her future namesake, St Teresa, would have approved.

P.S. If you are interested in reading more about the enigmatic Almanzor and the last years of the Caliphate of Córdoba, I warmly recommend Joan Fallon’s al-Andaluz series!