Think Paris. Think violent revolutions, streets running with blood, radicals screaming for a new order while holding red banners aloft, and many of you will go, “oh, yes: Les Miserables.” Which, of course, is correct. As is “That’s right, the French Revolution.” But for Paris there was not just one bloody upheaval—not even two. Paris was to suffer several revolutions, and one of them was in 1870.

Why all this stuff about Paris and revolutions? Well, because today I have the pleasure of inviting M.K.Tod to my blog to talk about her upcoming release, Paris in Ruins. Unsurprisingly given my opening paragraph, the events depicted in Ms Tod’s book take place in 1870. But things are much, much more complicated than a mere revolution. However, instead of me telling you about it, how about we turn things over to today’s guest? Go at it, Mary!

Paris in Ruins was prompted by readers’ questions about an earlier novel titled Lies Told in Silence. That story begins in 1914, when a young woman called Helene leaves Paris for a small town in northern France along with her mother, her younger brother, and her grandmother Mariele, a woman whose past holds tragedy and secrets.

To my delight, readers were taken with Mariele and the role she played in Helene’s coming of age. They wanted to know more about her. A second character threads her way through Lies Told in Silence – Camille Noisette, Mariele’s sister-in-law. Although Camille died before 1914, she features in that story through the memories of Mariele and through her house, which is located just outside the village of Beaulieu.

What could Mariele and Camille’s story be? I pondered this question for a while. What if I went back to a time when they were young women and the historical events that might have shaped their lives? I did the calculation and landed in 1870.

By the summer of 1870, Napoleon III, nephew of Napoleon I, had presided over France for twenty-two years, first as president and then as emperor. During that time, he expanded the French empire, modernized the economy, extended the railways and the merchant marine, and negotiated significant trade agreements with Britain and other European countries. He also dismantled and rebuilt large parts of Paris to create the boulevards and buildings that remain to this day and give the city its distinctive style.

For some—the aristocrats, the Catholic Church, military and political leaders, and the upper middle class—life was good. However, the gap between rich and poor had widened. The working class merely scraped by and half the population lived with poverty and destitution. The people were restless. Protests bubbled beneath the surface, occasionally spilling over onto the streets in riots and demonstrations. According to one account, people assembled every night on the Boulevards, singing the Marseillaise, destroying property, their leaders inflaming the crowds with sedition.

At the same time, the increasing militarism of Prussia and its desire to unite all German states into one country threatened Napoleon III’s regime. In early 1870, Prussia engineered a crisis that threatened France and by the middle of July, the two countries were at war. Prussian forces were superior in numbers, leadership, and technology. On September 2nd, Napoleon III surrendered after huge losses at the Battle of Sedan. By September 15th, the Prussian army reached the outskirts of Paris. By the 19th, Paris was totally surrounded. The siege lasted until the end of January 1871.

Tragedy didn’t end there. In the middle of March, radical republicans overthrew the government and established the Paris Commune. For ten weeks, the Commune carried out acts of murder, assassination, pillage, robbery, blasphemy, and terror, until finally expiring in blood and flames.

Wonderful! War, destruction, death, starvation, and a ruthless insurrection – all that drama, plus two capable women and an unexpected friendship. Throw in a dash of unscrupulous behavior, some clandestine activities, an element of romance, the desire to protect those you love and to serve your country, and voilà, as the French say.

Thank you for that, Mary. I must admit that the late 19th century is not a period I normally gravitate towards, but after reading Paris in Ruins, I realise there is SO much going on in that period. Technical advancements, political movements, women who are demanding a say-so in their lives… 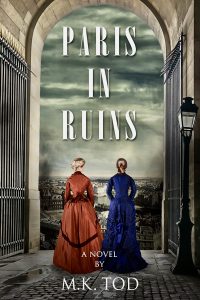 Paris 1870. Raised for a life of parties and servants, Camille and Mariele have much in common, but it takes the horrors of war to bring them together to fight for the city and people they love.

A few weeks after the abdication of Napoleon III, the Prussian army lays siege to Paris. Camille Noisette, the daughter of a wealthy family, volunteers to nurse wounded soldiers and agrees to spy on a group of radicals plotting to overthrow the French government. Her future sister-in-law, Mariele de Crécy, is appalled by the gaps between rich and poor. She volunteers to look after destitute children whose families can barely afford to eat.

Somehow, Camille and Mariele must find the courage and strength to endure months of devastating siege, bloody civil war, and great personal risk. Through it all, an unexpected friendship grows between the two women, as they face the destruction of Paris and discover that in war women have as much to fight for as men.

War has a way of teaching lessons—if only Camille and Mariele can survive long enough to learn them.

So what did I think of Paris in Ruins?

While the title is not all that alluring, a book set in the French upheaval of 1870 promised to be both educational and intriguing—and I liked the fact that Ms Tod has chosen to relate events through the POV of two women. Very often when it comes to war and violence, such events are described through the eyes of male characters.

The book opens in September of 1870. Cocky Wilhelm of Prussia, edged on by equally cocky and substantially wilier Otto von Bismarck, has decide to teach the French a lesson. After defeating Napoleon III and the French Army at Sedon, the Prussian army has now encircled Paris.

Prussia is not the only enemy. Paris is a hotbed of socialist sentiments, loud voices clamouring for a new revolution, a glorious Commune. The more moderate among the Parisians are concerned, and one of our heroines, Camille Noisette, is recruited to attend various Women’s Right meetings. Camille belongs to the haute bourgeoisie. She is intelligent, beautiful, poised—and bored. Which is probably why she agrees to help a certain André Laborde in collecting information about the radicals.

As the siege progresses, things become even more unbearable for those who had little to begin with, and the proponents of revolution have more and more people flocking to their banners—but first the Prussians must be defeated.

Except that they are not. Camille, determined to help, volunteers at Sarah Bernard’s makeshift hospital. I loved the cameo portrait of famous actress Sarah Bernhardt, depicting a strong, successful woman who had no problems rolling up her sleeves to genuinely help in times of need. Soon enough, Camille and the other volunteers are run of their feet trying to cope with all the wounded. Helping doctors saw off people’s limbs, watching men expire from wounds and sickness—it changes Camille, as does her relationship with André. She is no longer an indulged, protected hothouse flower: she is a strong, if scared, young woman watching her beloved Paris destroyed by bombs and violence.

Camille’s brother, Bertrand is engaged to be married to Mariele. Initially, the bold and self-assured Camille has little in common with the shy Mariele, but after a terrifying experience at the hands of the Prussians, Mariele is obliged to find the backbone within. I really liked how Mariele grew from pampered and shy to strong and shy—she was still Mariele, still sweet and caring, but with an inner core of newfound strength.

Ms Tod has evidently done a lot of research. At times, this resulted in monologues from various male characters in the cast bringing their loved ones up to date on one armed conflict or the other, thereby affecting pace. Ms Tod does not shy away from blood and gore and her descriptions of amputations and exploding bombs are as vivid as any TV show. And through all this, Ms Tod guides us through the ravaged Paris, through a Bois de Bologne deprived of its trees, through streets filled with debris and raging fires. She presents us with the stunning interiors of the homes of the well-to-do, with starving urchins, with women determined to lay down their lives in defence of the Commune. Angry rebels who strike defenceless priests, men who kill, men who sit stunned in the aftermath of yet more violence, more blood. In Ms Tod’s expert hands, the Paris Commune becomes a vibrant red—the red of spilled blood, of defiant rebel banners.

Camille and Mariele emerge from the events of 1870/71 permanently changed and yet, at the same time, more than eager to retreat into the life they once knew. A safe, uncomplicated life, a life built on conventions and expectations, free of excessive excitement and turmoil. No wonder, I say: no wonder at all!

You can find your copy of this compelling read here:

2 thoughts on ““Allons enfants…” – in which M.K. Tod tells us of the bloody destruction of Paris”