Today, I am proud to be hosting a stop on Ms Mount’s blogtour, featuring her recent release, The Colour of Evil. Thank you to Mary Anne Yarde of The Coffee Pot Book Club for inviting me to participate in this tour and thereby discover a new author. For those of you who’ve read Ms Mount’s previous books, you are probably already familiar with her lead, Sebastian Foxley, and his adventured in 15th century London. For those of you who have as yet to make Mr Foxley’s acquaintance, (as I was, prior to doing some deep-diving after being intrigued by the below) I hope the below excerpt and blurb will suffice to have you going “Yes, yes, yes!” before eagerly downloading your own copy.

Ms Mount is adept at recreating her period–likely due to a very long love story with said period. What is particularly enjoyable when reading Ms Mount’s books is that she writes about “ordinary people” – well, Sebastian Foxley is obviously an extraordinary ordinary person as he is our hero, but he isn’t rich, he doesn’t hover round the king and court. He lives in the shadows where most of us live.

Anyway: let’s start with the blurb

The Colour of Evil 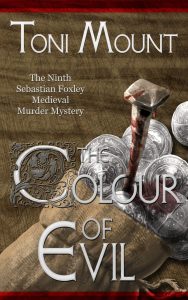 Every Londoner has money worries, and talented artist and some-time sleuth, Seb Foxley, is no exception.

When fellow craftsmen with debts to pay are found dead in the most horrid circumstances, fears escalate. Only Seb can solve the puzzles that baffle the authorities.

From counterfeit coins to deadly darkness in London’s worst corners. From mysterious thefts to attacks of murderous intent, Seb finds himself embroiled at every turn. With a royal commission to fulfil and heartache to resolve, can our hero win through against the odds?

Share Seb Foxley’s latest adventures in the filthy streets of medieval London, join in the Midsummer festivities and meet his fellow citizens, both the respectable and the villainous.

…and then, to shed further light on this new release, Ms Mount has offered an excerpt:

If ever there was a hell-on-earth, this was it, in the city’s very heart.

In the rats’ nest of alleyways south of Tower Street, Furnace Court was more noisome than most. Sunlight never dared trespass among the soot-encrusted walls, nor tip-toed into the confines where fire burned, smoke choked and the din of metal on metal rang out, assaulting the ears. Yet a man made his livelihood here. Bare-armed and brawny, smut-covered, the smith toiled at his anvil in the near darkness, working by the flickering light of the devil’s flames. Sweating, he hammered and quenched, re-heated and shaped, forcing his will upon the metals at his mercy. No iron could resist his power.

But such heavy labours were not his sole employment. Elsewhere, in the secret darkness beneath the streets, he had a second, smaller furnace. A more lucrative trade was to be had here, furtive and treasonous, undermining the prosperity of a kingdom. Hamo cared not a jot. In supposed-silver coins, struck with a die stolen from the nearby Tower Mint, there was money to be made – literally.

As the instigator, the greedy genius behind this crime, spread more of the gleaming, underweight groats and pennies throughout the city, strangers began to notice. Such coins undermined their livelihood and must be traced back to the source.

Thus it was that two men, speaking English with a foreign sound, came to a shop, just as the owner was closing the shutters at day’s end, demanding to be told the origin of the coins at fault. When no answer was forthcoming, the pair resorted to torture: a thousand small cuts, none fatal, but each draining the victim’s strength a little more. Every time they paused, removing the rag from the victim’s mouth, they repeated the question:

‘Who makes these coins?’

The victim did not know the answer. He had but borrowed them to pay what he owed. Exchanging a debt to one for a debt to another.

The cuts continued until the strangers were certain the victim spoke true by which time only death awaited but they would not deliver the fatal cut. Time would do that. But it was necessary that a clear message be left. And it could not be spoken by the victim. For fear he might name them, they split his tongue in twain – to warn the devious serpent lurking behind the counterfeiting business that they would hunt him down. Then, to show how much they knew of it, they covered the victim’s right hand – the guilty hand that passed the fake coins – in shiny pigment, brought for the purpose. And to end the message: that there was no escaping their retribution, they nailed the dying victim’s hand to his workbench and left a bag of the false money behind.

The new-minted coins, used to pay debts to the strangers, shone even brighter than silver: the colour of evil.

Friday, the eleventh day of June in the year of Our Lord 1479

The Foxley House in Paternoster Row in the City of London

I returned home with my purchases of quills and ink, Gawain at my heel. I could have asked Kate or Nessie to buy them, although, in truth, such items were not needed in the workshop. The errand was simply a means of escape. I entered the kitchen but the sense of something – someone – missing assailed me, like an icy hand clutching my heart, as it always did these days.

Rose sat stitching a pair of gloves of lavender-dyed kid leather, her work so delicate, the stitches were nigh invisible. Little Dickon was at her feet, playing some unknown game with a bunch of straws and a few twigs. Nessie stood at the board chopping fresh sage from the garden, the kitchen filled with its earthy scent. ’Twas a scene of domestic tranquillity, yet utterly amiss.

My Emily was not there.

I could not get used to the lack – a black hole in my soul that I feared naught would ever fill entirely.

I lifted Dickon from the floor. He laughed, showing off his few perfect white teeth.

‘Does my little man fare well?’ I asked him. A string of dribble down my jerkin was the answer to my query.

‘He does very well,’ Rose said. ‘Dickon, show your Papa how you can play at peep-boo.’

The child put his fists over his eyes then took them away of a sudden, shrieking with delight. I took up a table napkin to assist his game, covering my face with it. He pulled it aside, shouting ‘Boo!’ It was a merry jest indeed and one he seemed unlikely to tire of in the near future. I had work to do but what of that? Merriment was hard to come by of late. Thus, I would play with my son a while. He would attain the first commemoration of his birth date in the week to come: the first significant day in his life thus far. I prayed daily that he would see many, many more, as so many infants do not.

‘Mercy is coming to dinner,’ Rose said, ‘That you may see Julia.’

Julia was my daughter, born two months since upon that most sorrowful of days. The widow, Mercy Hutchinson, was the infant’s wet nurse but having three sons of her own, including Edmund who was a little older than Julia, she had taken the new babe to live with her in Distaff Lane, until she was weaned. Mercy’s other children were Simon, a scholar at St Paul’s School, and that scamp Nicholas – a toddling who was trouble upon two legs. I remained uncertain of the wisdom of having Nicholas visit too often, fearing Dickon might copy the elder child’s bad habits – biting people being his most recent undesirable trait. But Mercy and my kinsman Adam were betrothed, so I had to make the best of it: Nicholas would one day become a member of the family.

Neither was I able to determine for certain quite how I felt about Julia. Born too soon, she was the cause of my beloved Emily’s death. Yet she was an innocent.

Buy the Colour of Evil on Amazon or buy it here: 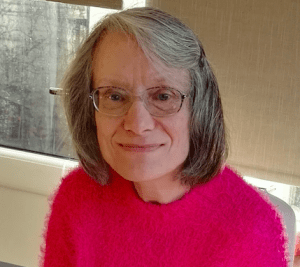 Toni Mount earned her Master’s Degree by completing original research into a unique 15th-century medical manuscript. She is the author of several successful non-fiction books including the number one bestseller, Everyday Life in Medieval England, which reflects her detailed knowledge in the lives of ordinary people in the Middle Ages. Toni’s enthusiastic understanding of the period allows her to create accurate, atmospheric settings and realistic characters for her Sebastian Foxley medieval murder mysteries. Toni’s first career was as a scientist and this brings an extra dimension to her novels. It also led to her new biography of Sir Isaac Newton. She writes regularly for both The Richard III Society and The Tudor Society and is a major contributor of online courses to MedievalCourses.com. As well as writing, Toni teaches history to adults, coordinates a creative writing group and is a member of the Crime Writers’ Association. 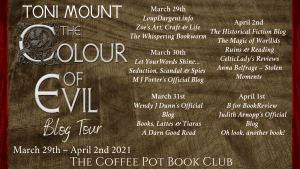