Most people live out their lives in obscurity—something to be grateful for, I believe, as celebrity comes with its own set of challenges.

Many people live below the radar for most of their lives, but then a sequence of events propel them onto the central stage and for a while their name is on everybody’s lips. Well, in medieval times not everyone’s lips as information spread but slowly and usually rather locally. Still, today’s protagonist did achieve name recognition – especially in connection to the events that led to his death.

Andrew de Harcla or Andrew Harclay was born around 1270, close to Kirkby Stephen in Westmoreland, and was probably the eldest son of one William Harclay who held land from the Cliffords. While the Harclays were extremely minor landowners, the Cliffords were a power to be reckoned with in the north of England and little Andrew would have grown up in a relative bellicose environment as most Englishmen this far north were constantly engaged in defending themselves against the Scots—or attacking them in return.

By the time Andrew really steps into the limelight, we’re in the year 1315. By then Sir Andrew was a battle-hardened knight, veteran of numerous campaigns against the Scots. It was just over a year since the English had been routed by the Scots at Bannockburn and now here was a huge Scottish army, led by Robert Bruce himself, intent on taking the town of Carlisle. It is estimated the Scottish host numbered around 10 000 men. Defending Carlisle’s two-mile wall perimeter were approximately 600 men. An easy picking, the Scots may have thought.

At the time, the Scots, led by James Douglas, has just done some serious raiding as far south as Hartlepool. In general, northern England lay defenceless before the confident Scots, in part due to the resounding defeat a year earlier, in part because England in 1315 was a kingdom at odds with itself, Edward II not seeing eye-to-eye on anything with his cousin Thomas of Lancaster, who effectively ruled most of the north. The Scottish leaders were quick to capitalise on this inertia, and as Carlisle lay only a few miles south of the border, I imagine Robert Bruce felt it would make a nice little addition to his lands.

In charge of defending Carlisle was Sir Andrew, and I dare say he swallowed somewhat at this challenging task: not only were the Scots far superior in number, but the defendants were short of supplies of all kinds—including weapons. This, however, Andrew did his best to remediate. Rocks, arrows, javelins—he stockpiled these along the walls, knowing the Scots would try to scale them. The Scots, in turn, were confident they’d overrun the walls. Robert Bruce had almost done so in 1311 but because he had other pressing concerns he’d allowed the town of Carlisle to ransom itself from him and gone on to do other things. Thing is, in 1311, Sir Andrew was not in charge of Carlisle’s defences. 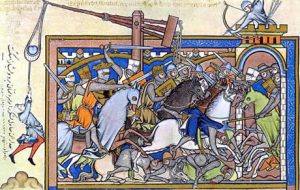 For close to two weeks, Andrew and his few men held the walls, rebutting every attempt made by the Scots to take the city. The weather conspired against the Scots, miring their siege engines, and after yet another attempt to scale the walls led by James Douglas failed, the Scottish leaders decided to give up. There were rumours of an English army hastening towards Carlisle and Robert the Bruce decided to return home. Had they persisted, it is likely Carlisle would have fallen, as no matter how brilliant a commander Andrew was, his few men must have been borderline exhausted after ten days of being constantly on their toes.

The defence of Carlisle earned Sir Andrew some well-deserved fame, personal praise and a nice heavy purse from the king—and a lot of jealousy from other well-born knights in the region who did not exactly warm to the scruffy and forthright Andrew.

Later in 1315 Andrew was captured by the Scots who demanded a substantial ransom for him. The king contributed to the ransom, but Andrew’s absence gave those who disliked his rise to prominence an opportunity to whisper their opinion in the royal ear—or at least in that of the up-and-coming royal favourite Hugh Despenser.

Still: Andrew was restored to his post as constable of Carlisle, was named sheriff of Cumberland in 1319 and things were as calm as they could be this close to the Scottish border. Or maybe not, as the infected relationship between King Edward and Thomas of Lancaster exploded into a full-blown rebellion. Sir Andrew was ordered to ride south in haste and in March of 1322 he commanded the royalist forces that defeated Thomas of Lancaster and Humphrey de Bohun at the Battle of Boroughbridge. The rebellion was crushed, the king was victorious and generously inclined towards his loyal knight. Sir Andrew was rewarded with the title of Earl of Carlisle, and the king himself belted him. Life, it seemed, was good.

Truth be told, life wasn’t that good. The Scots continued to raid with impunity, Robert Bruce determined to use violence to force Edward II to the negotiating table. For the people living along the Scottish border, life was difficult and frightening—and Andrew seems to have genuinely have cared for them. Edward II, meanwhile, was meting out harsh justice to those who had participated in the rebellion against him. Many were the men who over the coming months lost their lives, most through hanging, a handful through the substantially more gruesome death of being hanged, drawn and quartered. The king was in no mood to be conciliatory, neither against his internal enemies nor his external enemies, among which he included the Scots. Edward, just like his father, considered himself overlord of Scotland, declaring Robert the Bruce a traitor rather than a fellow king. And as to the Scots’ demands that Edward recognise Scotland a truly independent nation—pshaw!

At some point, Andrew despaired of ever seeing some sort of permanent peace in his neck of the woods. The king just didn’t want it. So what did our Andrew do? Well, he began his own, very private negotiations with Robert Bruce. Early in January of 1323, Sir Andrew rode to meet Robert Bruce in person and a treaty was signed. I suppose it is indicative of just how much respect Robert Bruce had for Sir Andrew that he entered into negotiations with him. What is also very apparent is that Andrew must have been a political fool: to enter into an agreement with Robert Bruce on behalf of England was, in effect, treason. It doesn’t matter that his main concern seems to have been to create some sort of lasting peace and thereby allow the people of the north some respite from continuous raids and violence.

Within a week or so after the treaty was signed, Edward was informed of its existence. There followed some weeks of pussy-footing about—after all, Edward did have a lot to thank Andrew for—but ultimately no medieval king could tolerate such an affront to their authority. Up in the north, many of the men disgruntled by Andrew’s rising star saw their chance. One of them was Sir Anthony Lucy, who, by all accounts, was a man Sir Andrew trusted. More fool he, one could say, as in early February Lucy arrested Harclay for treason. A month later, Sir Andrew was arraigned for treason before the royal justices.

He was not allowed to speak for himself. Instead, he was ungirded of his earl’s belt and had his spurs struck off. No longer neither a knight nor an earl, Andrew Harclay was condemned to die a traitor’s death. As he stood by the gallows he expressed what he had not been allowed to express at his trial, namely that he had done what he did for the sake of the greater good, wanting somehow to broker a permanent peace between Scotland and England. The contemporary Lanercost Chronicle seems to agree that these were his primary motivations, but as Edward II would likely have said it was not Andrew’s place to force the king’s hand.

Once he’d said his piece, Andrew turned himself over into the hands of the executioner. By all accounts, he died well—or as well as one can die when you are first hanged, cut down while alive, disembowelled in such a way that you are still alive to see your intestines burned before you, and then beheaded.

Some years later, Andrew’s nephew approached Edward III in the hopes of having his uncle’s conviction overturned. It didn’t happen, and so Andrew Harclay’s epitaph in the royal rolls is simply “lately the king’s enemy and rebel”. It does not, IMO, do this man justice. But it is, unfortunately, the truth.