Today, I am welcoming Alison Morton to my blog to talk about her latest book. Now, those of you who frequent

my blog will know that I love Alison’s books about Roma Nova, fast-paced thrillers set in a beautifully built alternative world, one in which a small remnant of the Roman Empire has survived to our times. So, as is made evident further down in today’s post, I was somewhat surprised when Alison explained why she wanted to write something different – but hey, I myself like writing in various genres!

Instead of speculating on why Alison felt motivated to step out of her Roma Nova world, how about I turn you over to her and let Alison tell us!

First of all, thank you hosting me on your blog, Anna. (You are welcome, honey! Whenever you want, in fact…)

Now, we’ve known each other and worked together on historical fiction projects for many years including the recent anthology, Betrayal, and earlier the 1066 Turned Upside Down ‘what if’ tales collection. But when I told you I was changing tack from my alternative history thrillers and steering towards crime, you gave me a strange look. Or perhaps it was the Skype screen going into pixelated mode… (Nope. That was all me, going QUÉ???????)

Then I explained. For a while, I’ve wanted to write a character with strong roots in France, which is where I live. My previous nine-book Roma Nova alternative history series came about because I’m a ‘Roman nut’ and I’ve always wondered what a society would be like if part of the Roman Empire still existed today. I added in a twist of women running the show – but where men were not disadvantaged.

Writing Roma Nova was fun, but it was the thriller element in the stories that became ever more dominant. Author Conn Iggulden, while reading INSURRECTIO (which he later endorsed!), suggested that I write one of my heroines as a contemporary character in a crime thriller. I rose to the challenge (of course!) and Double Identity was the result. (Ha! I also think it is because you really, really like writing strong, complicated female leads)

I’ve always been interested in cultural crossing. Like you, I’ve done a fair bit myself. Carina in the Roma Nova novels was the outsider who ‘came in from the cold’ and made that crossing; not without difficulty! Making my heroine Mélisende/Mel a French/English dual national added another layer of interest, well, internal conflict if I’m to be honest!

None of my heroines – Carina, Aurelia or Mel – is brilliant at everything, super-intelligent and supremely confident. That would be boring. Strong, but self-doubting women with rocky love lives and who make horrendous mistakes yet still push on are much more ‘read-worthy’ and for us as readers, much more human. Sometimes, though, I want to wring their necks or give them a good talking to! (Yup. Me too – with your heroines and my own)

Double Identity starts a new series – the sequel is 25,000 words drafted – but Roma Nova is not forgotten. I’m also working on a full novel of the foundation of Roma Nova in 395 CE, at the dusk of the Roman Empire. After that, who knows where things will go? 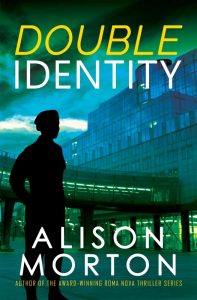 Deeply in love, a chic Parisian lifestyle before her. Now she’s facing prison for murder.

It’s three days since Mel des Pittones threw in her job as an intelligence analyst with the French special forces to marry financial trader Gérard Rohlbert. But her dream turns to nightmare when she wakes to find him dead in bed beside her.

Her horror deepens when she’s accused of his murder. Met Police detective Jeff McCracken wants to pin Gérard’s death on her. Mel must track down the real killer, even if that means being forced to work with the obnoxious McCracken.

But as she unpicks her fiancé’s past, she discovers his shocking secret life. To get to the truth, she has to go undercover and finds almost everybody around her is hiding a second self. Mel can trust nobody. Can she uncover the real killer before they stop her?

Anna here: wow, that sounds pretty exciting, doesn’t it? And it gets better when you read the excerpt!

Half an hour later in an interview room, the cop from the hotel flicked the recording machine on. He intoned his name, date and fellow officer’s details. So he was a sergeant and his name was McCracken. The woman detective constable was called Evans, a name as ordinary as her face. The grey walls met a dirty white ceiling; in the far top corner the red LED of a camera blinked. In any other circumstances Mel would have laughed at how much it looked like interview rooms on cop dramas. Now, it was intimidating.

But she was damned if she was going to let them see her fazed, however shaky she felt inside. She’d done her resistance training. She pushed her shoulders back and drew herself up straight, ready for their offensive.
‘Interview started at 12.20, Friars Green Police Station.’ He looked up at Mélisende. ‘Please state your full name and age.’
‘Mélisende Marie Cathérine Elisabeth des Pittones, twenty-nine.’
The detectives looked at each other.
‘Well, Mellysand—’
‘As I said before, it’s “Mél-i-send-uh”, but you may call me Mademoiselle des Pittones.’
Take that, you rude bastard.
McCracken snorted.
‘So how long had you known the deceased?’
‘Just over four months, if you mean intimately. Socially, twenty-two years.’
The woman detective stared at her.
‘We became lovers on my last trip to England.’
A sour taste rose in Mel’s throat and she coughed hard. But she swallowed it down. She was not going to be sick in front of these two. The woman, Evans, gave her a plastic cup of water.
‘What’s your current occupation?’ McCracken continued.
‘Unemployed, as of three days ago.’
‘Okay, what was your occupation up to three days ago?’ McCracken growled at her.
‘French Armed Forces.’
‘Really?’
‘Yes, really.’ She flicked out her hand, grabbed his notepad and scribbled a number on it. ‘That’s the number for the Dir-rat, sorry D-R-H-A-T, where you can check.’
‘Who’s that, then?’
‘Human resources, Direction des ressources humaines de l’armée de terre.’ Mel looked at him, eyebrow raised. ‘You speak French, I presume?’
McCracken whispered something to his colleague who took the note and left.
‘Detective Constable Evans has left the room. Interview paused at 12.30 p.m.,’ he intoned and tapped the LCD screen of the recording machine to ‘off’.
‘You think you’re bloody clever, don’t you?’
Mel countered his glare with one of her own.
‘No. I’m just answering your questions. I can’t help it if you can’t deal with it. And for what it’s worth, you’re being bloody rude.’ 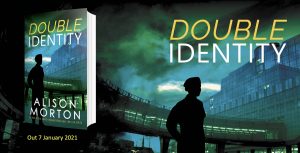 Anna again: Nice and cosy, isn’t it? And that, dear peeps, is how things kick off between Mel and McCracken – they’re like two angry dogs growling at each other. Actually, they tend to butt heads quite often those two, which sort of segues rather seamlessly (err…) into my review:

The day Mel de Pittones wakes up to a dead man in her bed is the day her life takes a severe turn to the worse. Not only has her lover been murdered, but she is the obvious suspect—at least according to DI McCracken who seems to have taken as instant a dislike to her as she has done to him. They come from different worlds, those two: Mel has been brought up in a world of wealth in a chateau while McCracken fought his way up from a  council estate.

Hidden forces collude and soon enough McCracken and Mel find themselves on the same side, attempting to unravel a complicated net of crime in which, apparently, Mel’s lover played a central part. Or so Mc Cracken says, even if Mel holds out hope he’ll be proven wrong.

Set mainly in London, this fast-paced story has us hanging on to Mel’s shirt-tails as this female force of nature batters her way through the obstacles between her and the truth. At times, Mel is too brash, too prickly. She is also too direct—but efficient.  McCracken is mostly sturdy and surly—but quick-witted. At times, Mel’s vulnerability shines through. At others, McCracken’s obvious concern for her make her snarl defensively. Sometimes, these two firecracker personalities find themselves in total sync with each other. Which is fortunate, as together, they may have a chance of surviving the cesspool of deceit they must navigate.

As always, Ms Morton’s dialogue is crisp. As always, her action scenes are plentiful and intense. Her descriptions are vivid—from the worn vinyl flooring of the secret centre of operations to the luxurious wealth of some of the less-than-moral members of the criminal world Mel finds herself obliged to enter undercover.

Double Identity offers quite the adrenaline-laced escape from the world around us. I’d recommend making a big pot of tea before you sit down with it, as once you’ve started, you’ll likely want to finish it in one go.

For all ebook and paperback retailers: https://bit.ly/3s0XUlV 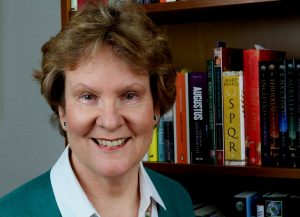 Alison Morton writes award-winning thrillers series featuring tough, but compassionate heroines. She blends her deep love of France with six years’ military service and a life of reading crime, historical, adventure and thriller fiction. On the way, she collected a BA in modern languages and an MA in history.

“Grips like a vice – a writer to watch out for” says crime thriller writer Adrian Magson about Roma Nova series starter INCEPTIO. All six full-length Roma Nova thrillers have won the BRAG Medallion, the prestigious award for indie fiction. SUCCESSIO, AURELIA and INSURRECTIO were selected as Historical Novel Society’s Indie Editor’s Choices.  AURELIA was a finalist in the 2016 HNS Indie Award. The Bookseller selected SUCCESSIO as Editor’s Choice in its inaugural indie review.

Alison now lives in Poitou in France, where part of Double Identity is set and is writing a sequel as well as continuing her Roma Nova series.

Connect with Alison on her thriller site: https://alison-morton.com

5 thoughts on “A new tough-as-nails heroine sees the light of the day!”