My grandfather was born in 1906. At the time, Sweden was not exactly the welfare state it would one day become—not so strange, seeing as the concept of a welfare state had as yet not seen the light of the day. Like in most European countries, Swedish society in the early 20th century was divided into a very small privileged group of “have a lot”, a larger group of “Don’t have all that much” and a large group of “don’t have anything at all”. At the time, we still even had a variant of serfdom in southern Sweden, where people worked for clothes, housing, and food.

My paternal family has its roots in the far north. There were no large estates up there, hence no serfdom. But the north was harsh. It was mostly woods, more woods, even more woods, long, cold winters—and mines. People survived by multi-tasking. The men worked in the mine when they could, spent the winters felling timber and had a plot on which to grow potatoes and enough hay to feed a goat or two. Women tried to contribute by taking in laundry, having hens and selling the eggs, maybe grow some veggies. They also took care of the children and tried to keep the home and their family clean.

Clean. We take it for granted, don’t we? My grandfather didn’t. Or rather, his definition of clean would have been different from ours. Once a week, his mother would pull out the washtub and fill it with water. The family would take turns, starting with Dad. By the time the last little baby had been adequately scrubbed, the water was likely not so clean anymore.

In the early 20th century, a photographer named Lubbe Nordström travelled through Sweden, documenting everyday life. He was shocked by the poverty, by the dirt and despair. At the time, the Social democrats were planning ambitious reforms, targeted at ensuring every single Swede grew up clean, healthy and educated. The political elite were shocked by the pictures taken by Lubbe. Clearly, the gap between where Sweden was and where it wanted to be was much, much bigger than they had expected. The politicians knuckled down. Those visions had to become reality! It would take some time before they did—by the time they did, my father has just become the first in his family to initiate university studies.

When I knew my grandparents, we had left that reality behind. But I suspect it was the memory of that distant childhood and the lack of readily available hot water that had my grandmother converting their little bathroom into a veritable spa, one in which she spent hours soaking in the bath. 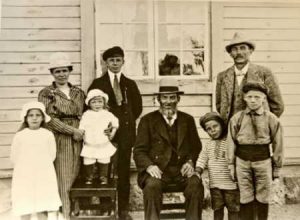 Above, my grandfather is the young man leaning against the window. He is around sixteen and wears a cap that declares he has taken “real examen”, i.e. he has ten years of schooling and is therefore considered quite educated. The suit he is wearing is likely the one he was confirmed in. The little boy standing on the chair in front of his mother was called Egron—something his parents found very, very amusing as it was Norway in Swedish spelled backwards. Here they are, in their absolutely best clothes—and as you can see, the clothes don’t look all that best. The gent sitting in the middle is my great-great-grandfather, Petter. The man standing to his right is my great-grandfather, Gustav. My father liked him, and had fond memories of riding his huge Ardenner horse as it lugged felled timbers through the snow. He had less than fond memories of helping him empty the contents of the privy onto the fields.

This picture is around a century or so old. A very short time in history, but one that has brought about amazing change in our everyday life. We take things as electricity and heating for granted, we dump a load into the washing machine before fixing dinner, we have dishwashers and vacuum cleaners. The woman holding the youngest—my great-grandmother Viktoria—had to do all the household work by hand. As money was hard to come by, she also had to make every single garment last as long as possible, which meant hours and hours mending and turning seams.

Some years later, my grandfather married. Every single expense was carefully jotted down in a little notebook with black wax covers. In the first three years of married life, he records one pair of trousers for himself. One. His wife buys two dresses and a coat. She wears that coat for the coming decades and the same goes for the boots she also bought. Their dining room furniture was bought piece by piece. My father recalled stuffing too-big shoes with straw for insulation during winter. He rembered itchy woolen underwear that he’d inherited from a distant cousin and that he, in turn, would hand down to other relatives. He also recalled the desperation with which his mother cleaned and cleaned and cleaned, doing everything she could to keep the lice and bedbugs away.

Karl moved south. In difference to his father and grandfather, he was somewhat frail and could not cope with the harsh life of mining and forestry. Fortunately, he was good with numbers and had a neat handwriting, so he became a clerk, slowly working his way up the food chain until he was made manager of a small co-op far away from where he was born. His wife never forgave him for uprooting the whole family from their home, separating her permanently from her family. Travelling was too expensive for her to see any of her relatives more than very occasionally. But Karl felt he had moved up in the world. Not only was his son, my father, the first in the family to attend university, they also had a two bedroom apartment, they had a dining set with six chairs. My grandmother even had a Singer sewing machine—and that little tiled bathroom she converted into her own haven.

Still: clothes were worn until they fell apart when they were torn and made into rugs. Shoes were cleaned and polished and worn until the sole was impossible to cobble together. My grandmother still had that old coat, my grandfather still noted down every expense. Food was never wasted. As a child, I found it very strange when my grandmother would start a meal by placing a glass with the water in which she had boiled the veggies before me.
“Drink up,” she’d say. “It is good for you and it would be a waste to throw it away.”
Err… But one did not discuss with my grandmother.

When my father died, I discovered that he too had a little notebook. Just like his father, every single piece of furniture, every household item had been neatly noted down.

Like my grandfather, my father had a thing about numbers. He graduated with a Master in Finance and Business Administration. Like my father, I also went down the number route and have spent most of my life working as a financial person. And just like both my grandfather and my father, I too kept a notebook in the early years of my married life. Every expense was carefully jotted down. In difference to both my father and his father, at some point I stopped registering our purchases and my black wax cover notebooks ended up in the trash. There are days I regret that.

As I turn the pages of my grandfather’s meticulous little journal I get an insight into a life that was very different to mine. Less than a century separate us, but where I grew up in relative affluence, with light and clean water and opportunities to become what I wanted, my grandfather was a child of cold and dirt who somehow found it in him to drag himself out of all that, determined to somehow make a better life for him and his family. His son, my father, benefited from that determination—as did I.

In the picture above, my long-dead relatives stare into the camera. They do not smile. Life is too hard. Children often die young. Money is scarce. My great-grandmother, Viktoria, looks a bit nervous. Her only daughter, Göta, is resplendent in a borrowed white dress. A moment in time, captured for ever on a dry plate. What the future will bring, they do not know. But like all parents, I imagine Gustav and Viktoria are hoping life will be easier for their children than it is for them. In their case, those hopes came true and the world my grandfather left behind when he died was fundamentally different from the one he was born into. A better world, according to him. One in which there was hot water and electricity–and no lice!

5 thoughts on “A century of change”