Once upon a time, our very, very ancient ancestors sat huddled in the relative safety of their cave and stared out at the dark outside. It was just as dark inside—and cold. Until some bright person discovered how to make fire. I suspect it was more a case of “look, look, that bush is on fire! See how bright it is, how warm! How about we take some of that with us?” And there were blistered palms and a lot of creative cursing (of course primitive man uttered something akin to a curse…) but our bright spark persevered, and soon enough, fire was tamed. Sort of. Hungry beast, fire, so it had to be fed and molly-coddled and if it went out, it went out—which is when someone started thinking about how to make fire, instead of just sitting about and hoping lightning would strike. 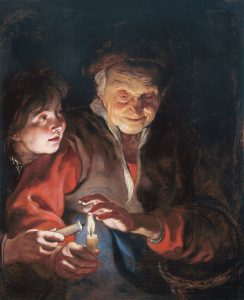 Anyway: once there was fire, there was light. Even on a dark, cold day like today, there was light. Not enough light to illuminate much more than the person closest to the fire, but still. Children fell asleep, feeling safer when the embers glowed red in the firepit. Old people (you know, twenty-five-year-olds. Life was short back then) relished the warmth, liked seeing enough to pick lice from their dear ones.

Since that communal campfire, we’ve come a long way. These days, we flip a switch and happily intone “Let there be light!” But on days such as this, a cold and dark November day, electrical light isn’t always enough. No, the dark of advancing winter, of days that begin late and end very early require a living flame or two to dispel the gloom.

Which brings me to the subject of today’s post, namely candles.

Usually, when it comes to things that have been around for yonks, it is either the Chinese, the Egyptians, the Ancient Greeks or the Romans who are credited with the innovation. In this case, we can rule out the Egyptians – they preferred oil lamps. So, apparently, did the Chinese and Greek. In actual fact, the Romans were also big on oil lamps. Olive oil was cheap and easily available so why use something else? Well, the Romans were an expansive sort. Yes, olive oil was readily available in the Mediterranean region, not so much in the forests of Germania or in the wilds of Hibernia.  And so it seems someone came up with the brilliant idea to find a fat that was more readily available and, preferably, easier to transport than oil. Hmm, said our Roman think-tank. Hmmm… And then they looked at each other and nodded.
“Tallow!” they said.
“Tallow?” A patrician Roman would likely wrinkle his nose. “That stuff smells!”
“Ah, but it burns steadily and requires no more than some twine to shape it into a portable lamp.” And so, dear peeps, the tallow candle was born, like half a millennium before the birth of Christ. (Oh: just so the Chinese don’t feel left out, they too came up with the idea of candles, independently from the Romans. Theirs were made of whale fat which, as things would turn out, was a much, much better alternative than tallow. Well, except for the whales. More of that later.) 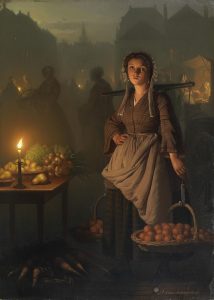 Initially, tallow candles were emergency items. You know, along the lines of “damn, damn, damn, we’ve run out of oil and now what do we do?” People preferred their oil lamps – the light was better, the smell was definitely much, much nicer.

And then, the Roman Empire collapsed. Olive oil was no longer readily available outside of the region closest to the olive trees. In the darker and colder parts of Europe, the tallow candle came into its own, a faint flicker of light through the Dark Ages (and I am playing with words here: I do not consider the so called Dark Ages to have been particularly darker than the ages that preceded or came after them) . The smell remained a problem, and this is why the wealthier among our forefathers sighed with relief when the first beeswax candles saw the light of the day. At last light without odour! Dratted expensive light, mind you, so tallow candles were still the most common.

For centuries, the preferred source of light in northern Europe were candles. Yes, there were oil lamps, and yes, over time oil with which to burn these lamps became more available again. But by then, the candles had affixed themselves permanently to our tables, candlesticks, candleholders. 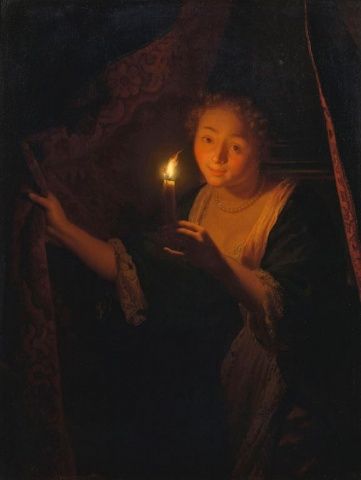 Candles were made and sold by chandlers—who also supplied soap and vinegar. Making candles is time consuming. I’ve only done it a couple of times, and mostly I recall the utter boredom of dipping the twine, lifting it up, dipping it again, lifting it up…Initially, nothing seems to happen. Down goes the twine, up it comes, looking remarkably unchanged. But then, almost like magic, the candle starts to build, and once it does, things start moving faster—relatively speaking. As I recall, my end results were not that impressive. Turns out it was harder than I thought to produce a straight candle with a centred wick. Obviously, the medieval chandler had all that down pat. Quite often, this was an itinerant profession, the chandler showing up with his twine and expertise to make candles out of the fat and grease that the medieval cooks had collected in vats. I can only imagine the smell…

In the 18th century, someone discovered one could use whale oil, spermaceti, to make candles. (Remember those ancient Chinese candles? Way before the rest of us…) No smell, no smoke, just a nice clean flame and a very stable candle. Out went the tallow candle on its ear, in came the spermaceti candle—but not for all that long. A century or so later, candlemaking had gone industrial and moulded candles were produced in their thousands using paraffin. At last a reliable, non-smelly and cheap source of light! Yes!

And then, dear peeps, along came Mr Edison and his light bulb. Talk about disruptive technology, hey? In a matter of decades, the candle which had lit us through the centuries became redundant.

Except, of course, when we light them to dispel the dark and gloom… 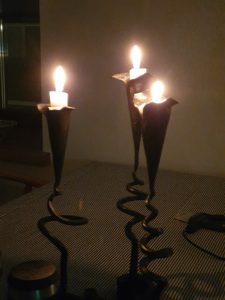