”Oh it’s a long, long while, from May to December. But the days grow short, when we reach September…” Frank Sinatra would sing, and my mother would sing along. This was one of her favourite songs—especially at the advent of autumn. Her other favourite was “Les Feuilles Mortes” . Both these songs are somewhat depressing: time is running out, peeps, and we’d best make hay while we can. 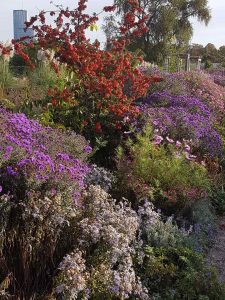 Tomorrow is my birthday, and for the last few days I’ve been humming the September Song. Initially, I supposed this was because I was thinking about my mother. Today, insight struck me: for the first time ever, I was singing the song because the lyrics felt disturbingly relevant.

For a while there, I had to fortify myself with extra amounts of tea while absorbing the fact that I am getting old. Me! A person who still looks at trees while considering the best way to climb them, who spends hours this time of the year looking for the shiniest and most beautiful conkers, who cannot pick up a longer stick without swishing it through the air and pretending it’s a sword. I will pass a rocky outcrop, clamber on top and whisper “Geronimo!” (I realised years ago that yelling Geronimo while jumping off my perch had people throwing me worried looks). Mind you, jumping off anything is no longer an option, so this Geronimo would have to shuffle carefully off the rock, which sort of dilutes from the overall experience, but still… When I shared this with hubby, he just laughed. Then he told me that to him, I looked exactly the same as I did when we first met and would run towards each other yelling “Catherine” and “Heathcliff!” respectively. I snorted. I know I don’t look like that long gone girl, I mean I have eyes in my head.

“No? And what do you see when you look at me?” hubby asked. I tilted my head to the side and studied him. And yes, I see that his hair is a whitish grey, that he is softer round the middle and doesn’t have quite as impressive a butt, but over it all hovers the vision of him as he was when we met. I can’t really see him as anything else than my Johan, and that image was engraved in my heart so many years ago it is impossible to erase.

He nodded. “Precisely.” This man of mine swept me into a quick embrace and kissed me before letting me go. “Besides, getting old sure beats the alternative,” he said as he made for the door and the exciting tasks waiting for him outside. Like checking on Arnold the robot lawnmower, taking a turn or two chopping some wood, or clambering up a ladder to check the gutters.

I returned to my musing. Age, they say, is relative. Except, of course, that it isn’t. There is an element of uncompromising biology to ageing, and whether we like it or not, our bodies change. Yes, we can keep fit, eat healthy stuff, solve umpteen sudokus a day to maintain an agile mind, but eventually we have to reconcile ourselves with the fact that we can no longer do quite as much as we used to.

Growing old in a society so invested in façade rather than content is a bit of a challenge. I remember when I was young (and everyone over the age of forty had a foot in the grave) that older people dressed differently. They wore hats. Tweed suits. They permed and dyed their hair (sometimes in a most unappealing shade of blue). They wore sensible shoes.

These days, those of us pushing upper middle age wear sneakers and jeans. We embrace new fashion trends (well, not all of them. I will NOT buy myself a garment in corduroy no matter how “in” it is. Neither do I wear slippers decorated with tufts of faux fur or consider buying something in vibrant orange), some of us are early adopters of new tech – I am thinking specifically of my dear friend Alison Morton and her hubby Steve who are very much on top of every single technical gadget around.

But despite our attire and our tech savviness, there’s no denying that time is passing as we speak. Years swish by at an alarming rate, a logical consequence of the fact that one year is a substantially larger share of the life of a ten-year-old than a fifty-year-old. 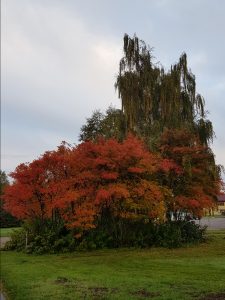 Plus, as we grow older we become increasingly aware of the fact that there is an end point. Yes, even when we are young we know we are born, we live, we die, but it is an abstract concept—life seems pretty eternal when you’re twelve. At my age, death is no longer a stranger. When your parents die, it sort of pushes you to the top of the line, and even if I hope to live many, many years more, I do feel a growing need to ensure I tick off items on my bucket list. Okay, so I should probably start by writing said bucket list, because truth be told, so far it is very vague. It does contain some things:

Hike round the Black Sea

Take a degree in history

Go on a pilgrimage

Ride across the Continental Divide in the US

Huh: that bucket list is not all that vague after all. Clearly, I don’t have time to agonise over getting older. I have things to do, places to be, peeps!

Besides, hubby is right: Getting old is better than the alternative.  In Frank Sinatra’s song, the days dwindle down. “And these few precious days I’ll spend with you,” he croons, and I croon along, because I know exactly who I want to spend those days with. I sure hope hubby is as enthusiastic about hiking round the Black Sea as I am!

12 thoughts on “The Days Dwindle Down”