As I was out walking earlier this week, I found myself considering the names of the weekdays – as one does. (What? You don’t? Does this mean you don’t mull over the origins of words like “axe” either? ) Mainly, I was reflecting on the fact that the names in Swedish, German and English are very similar, indicating they must have been defined prior to Proto-Germanic beginning to evolve into the various languages that today make up the Germanic languages. 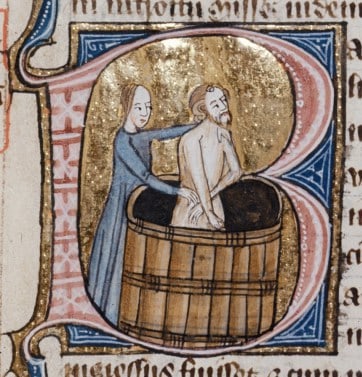 The fact that we have a moon day (Monday) and a sun day (Sunday) indicates these names are very, very old. Then we have a number of days celebrating gods such as Tiw or Tir, Woden or Oden, Thor and Frey/Freya. Plus we have the odd one out: Saturday. In the West Germanic languages, this day is named for Saturnus, a throwback to its Roman name. In the North Germanic languages we’ve skipped all reference to Saturn. Instead, we’ve named this day for an activity. We call it Lördag in Swedish, which effectively means “washing day” or “bathing day”. I guess this goes to show even our ancient ancestors enjoyed keeping somewhat clean.

Tir, Woden, Thor and Freya are gods we usually associate with Vikings, you know: “By the hammer of Thor!” or “I swear on one-eyed Odin.” In fact, these gods were hoary-headed with age by the time the Norsemen began gallivanting across the North Sea to bring fear and terror in their wake. When the Germanic tribes began their slow spread south in the 4th and 5th century, they carried Woden et al with them—as well as the names of the week.

Mind you, the week has not always had seven days. There was probably a time when people didn’t even think in days or weeks—however inconceivable that is to us, compulsive time managers that we are. The seven-day week saw the light of the day in the century after the birth of Christ and was, as most things were back then, an innovation introduced by the Romans.

The Romans named the days of the week after planets associated with their gods. These names still survive in modern Romance languages. In French, it’s Lundi, Mardi, Mecredi, Jeudi, Vendredi, Samedi and Dimanche. In Spanish it is Lunes, Martes, Miércoles, Jueves, Viernes, Sábado and Domingo. In Italian it is Lunedi, Martedi, Mercoledi, Giovedi, Venerdi, Sabato, Domenica.

Just like the Germanic weekday names, Monday is the day of the moon. Tuesday for our Romance language speakers is the day of Mars, god of war, while Wednesday is the day hallowed to Mercury. On Thursday, our Romance speakers celebrate Jupiter (in Latin Jovis), Friday is the day of Venus – which tallies quite nicely with Friday among the Germanic speakers being the day of Freya, doesn’t it? Clearly, Fridays were intended as a day of loving… Saturday is rather interesting: Samedi, Sábado and Sabato are all variants of the Hebrew word shabat or sabbath. No reference at all to Saturn.

Sunday in the Romance languages is no longer a day in which to venerate the sun. Nope. In French, Spanish and Italian, Sunday is the Day of our Lord, dies Dominicus, a day set aside to properly worship the Christian God. Not a trend that caught on with my Germanic speaking forebears – they stuck to their beloved sun.

In conclusion, the names we give the days are a rather haphazard mix of gods and planets—and a pagan mix at that, with the exception of the dies Dominicus adopted by the Romance languages. Given the Catholic church’s tendency to shy away from all pagan practices (unless they could shanghai them into a Christian holiday, as they died with Christmas, St John’s Eve, All Hallows, Easter—a long, long list) one would have assumed the early fathers of the church would have been horrified by using weekday names that evoked Roman or Norse deities. It seems in most cases they weren’t. They probably had other, more important, things to do, like spreading the word of God, converting kings, encouraging “Christian” armies to destroy heathen folk, oversee the trials and deaths of pagan leaders—you know, in general bring home that the Christian faith was a force to be reckoned with.

There is, however, one exception to the above lackadaisical approach to the naming of the weekdays. Where the people in France, in England, in Spain—well, basically everywhere in Europe—were content to stick with the old names, one man decided he would not. Allow me to introduce you to Martinho de Dume or Martin of Braga as we call him in English.

This 6th century gent was a most pious man, famous among other things for several moral treatises. He was also a bishop, and somewhere along the line he obviously felt someone had to do something about the use of pagan names in everyday life – at least in his bishopric. He had worked diligently and determinedly to convert the people of Gallaecia (roughly present day Galicia in Spain and the northern part of Portugal) to Christianity and maybe that was why this was so important to him.

Whatever the case, Martinho decided to take Holy Week as inspiration for his weekdays. Obviously, there was no reason to change the name of Domingo (Sunday). But after that followed an entire new set of names: segunda-feira, terca-feira, quarta-feira, quinta-feira, sexta-feira. Essentially, they mean “second day of fair” all the way through “sixth day of fair”, fair being a day when one should not work but instead turn to religious devotions—as all devout Christians should do as they prepared themselves for the coming ordeal of reliving Christ’s suffering.

Martinho’s names caught on. And so, in difference to every other European country, Portugal ended up with a list of weekdays without as much as a whiff of paganism. Do present-day Portuguese spend a lot of time thinking about this? I doubt it. Do they now and then send up a prayer of gratitude to dear San Martinho, thanking him for having given them these so Christian names for their days? Probably not. But I get the feeling San Martinho smiles down at them from his heaven while silently congratulating himself (as he likely does on a daily basis) for not only having christened the once so pagan Portuguese but also giving them weekday names that will never, ever tempt them back to dangerous heathen deities.

These days, of course, few of us give any thought to the etymology of our weekday names. Even fewer experience an ardent desire to rediscover the pagan rituals of our ancestors. And as to the word “axe”, it is far, far older than the name of any of our weekdays. Not exactly surprising, as that very, very ancient ancestor of ours who first shaped a flint into an axehead probably didn’t care what day of the week it was. But in case you’re wondering, “axe” stems back to Proto-Indo-European. It is one of the really, really old words – as is “sun”, “mother” and “father”. Words that have accompanied us through human history, all the way from our first stumbling steps out of obscurity to today. Cool, right? Or maybe that’s just me…