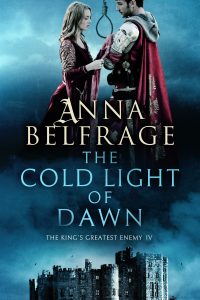 Roger Mortimer died on the 29th of November, 1330, more or less as depicted in the final chapters of this book. Opinions about him remain divided: some have a tendency to paint Isabella as a victim and Roger as an ogre, others believe Roger and Isabella were in it together, all the way. I lean towards this latter version. Was Mortimer grasping and power-hungry? Undoubtedly. But he was also capable and hardworking, appointing equally capable and hardworking men to various offices. Testament to this is that Edward III made very few changes to the administration after Mortimer’s death.

Obviously, I have taken some liberties. Edward did homage to Philippe in Amiens, not Paris, but as I wanted to mastermind a meeting between Edward and his father, I felt Paris would allow more room for manoeuvring. As far as I know, Edward never threatened someone with tongs—but I believe all successful medieval kings had a streak of ruthlessness in them.

Was Isabella ever pregnant by Mortimer? We don’t know. In fact, some argue that they weren’t even lovers, but I think a lot of things point to them being intimate, starting with the rooms assigned to Mortimer in Westminster. Assuming that they did share a bed, I find it likely that there might have been a pregnancy—both Mortimer and Isabella had several children with their respective spouses. Ian Mortimer puts forward in his excellent book The Greatest Traitor, that in 1329-30 Mortimer arranged for prayers to be said for the king, the queen, himself, his wife, his children, Isabella, and an unknown Earl of Lincoln. Maybe this was his and Isabella’s child. Or maybe not. Whatever the case, even if there was a child, it does not seem to have survived long enough to be mentioned anywhere else.

Likewise, in the matter of Edmund, Earl of Kent, he had been quietly arrested before parliament, subjected to questioning and brought before a specially convened court. His confession was then read out loud to the assembled parliament, at which point Edmund did throw himself on his nephew’s mercy, begging piteously for his life. It didn’t help, and on a cold March day the poor man was kept waiting for hours because the executioner had fled. The handling of the Earl of Kent is a major blot on Mortimer’s character. He baited a trap and fooled the impetuous earl into believing his brother was being held prisoner. When Edmund decided to act, Mortimer’s trap slammed shut and Edward III had no choice but to condemn his uncle to die. On the other hand, Edmund did write that letter…

When it comes to Edward II’s fate, I belong to those who believe it isn’t one hundred percent certain he died in 1327. This has allowed me to give him an extended lease on life, and I imagine he and Egard have a lot of adventures before them.

I have also given Thomas of Brotherton a lot of space in this book—far more than he has in recorded history. For a man born to power and wealth in times of great upheaval, this Earl of Norfolk is a surprisingly invisible character, an unremarkable character living well below the radar. I have chosen to make something more out of him, finding it difficult to believe that any child born to Edward I and his rather impressive second wife, Princess Marguerite of France, would be so…so…beige.

As always, I must remind my readers that Adam de Guirande is an invented character (unfortunately) as are his wife, his family, the people who serve him. However, his brother-in-law, Richard de Monmouth, did exist and was, in fact, killed that night in Nottingham when Roger was arrested. William de Guirande didn’t, seeing as he never existed. But if he had existed, I am convinced he would not have hesitated to sacrifice himself to save Geoffrey. That’s the kind of man William was.

Lady Joan was destined to spend several months as the king’s prisoner. But Edward knew she was innocent of any crimes—as were Mortimer’s sons—and a year or so later, Lady Joan was free and some of the attainted lands had been returned to Edmund Mortimer. Lady Joan went on to relentlessly demand the return of her dower lands, and at some point Edward III acquiesced. He also reversed the sentence of Roger Mortimer. In 1354, Mortimer’s grandson—another Roger—was reinstated as Earl of March and “our” Roger was cleared of the accusation of being a traitor.

Isabella spent a year in house arrest before being allowed to move freely again. Most of the lands and riches she’d awarded herself were returned to the king, but Edward was ever the dutiful son, ensuring dear Maman had the means to live a comfortable life. I dare say there were days when Isabella missed her hawk and the heady sensation of being in charge, but she was pragmatic enough to adapt to her new life.