God, it is said, created Adam before Eve, and to keep Adam adequately occupied he was given the task of naming all the fantastic forms of life God paraded before him.
“Centipede,” Adam said, having regarded this multifooted creature for a while.
“Zebra,” he nodded (with an extended eeee sound) but was struck mute by the stately grandeur of the hairy pachyderm that looked down its very long, elongated nose at him.
“Mammoth,” Adam decided after a while.
Day after day, he sat there naming these creatures, and it struck him somewhere round day 178 that they all came in pairs. Two elephants, two lions, two penguins, two stoats but only one Adam. Which was why God brought forth Eve, and Adam took but one look and fell helplessly in love. Alternatively one could argue that if Adam wanted to procreate, there wasn’t much to choose from – same goes for Eve.
“You could try, you know,” Eve said one evening, looking Adam up and down.
“Eh?” Adam wiped his mouth with the back of his forearm.
“A girl likes being courted,” Eve pouted. “You know, flowers, jewelry  the odd little daytrip …” Eve sighed and threw a look at the rolling green meadows of Eden, picture perfect and oh, so boring.
“Why bother?” Adam yawned. “It’s only you and me, right?”
“I could find someone else,” Eve threatened.
“Yeah, sure,” Adam laughed, “like how about setting up house with the ant-eater next door? Or hey, chat up Mr Tiger and see how far that gets you.” Adam was very amused. Eve was not, and when dusk settled like a purple velvet curtain Eve refused to snuggle up close to Adam, staring at Venus instead while humming “Love hurts“.
“Pssst! Gorgeoussssssss,” someone hissed.
Eve almost fell off her little log. “Who’s that?” she hissed back, straightening her spine somewhat.
“It’sssss me,” this hissing presence said. “You’re one ssssexy lady, ssssssweetheart.”
“You think?” Eve preened and sidled closer to the voice that seemed to be coming from a nearby tree.
Well, the rest is history as they say, with a very aggravated Adam being thrown out of paradise on account of his woman. (Or wife? Were Adam and Eve married?) I imagine there were many, many nights when Adam berated his wife for being an idiot, in response to which Eve cried that it was his fault – for not showing her he loved her.
“Love you?” Adam snorted. “What sort of romantic drivel is that?”.
If we stay with the Old Testament for a while longer, there’s the sad lovestory of Samson and Delilah. Samson was a somewhat complex character, bound by his parent’s oath as a nazarite, one of God’s chosen. God has plans for Samson, having given the young man impressive strength with which to smite the Philistines – as long as he didn’t cut his hair (Haircuts and alcoholic beverages are a major no-no for the nazarites amongst us). Anyway, Samson became a major burr on the Philistines’ nether parts, and after several failed attempts at catching him, the Philistines resorted to a ruse. Samson loved a young woman called Delilah (as deceitful then as she was when Tom Jones sang about her) and one night he finally told her it was all in his hair, whereupon she proceeded to shave his head while he slept. This was probably unrequited love from Samson’s side – Delilah seemed quite unperturbed when her man was led away and blinded. One could say that in this case, what Samson did in the name of love was sheer stupidity.

Yet another woman in the Old testament, Judith, took a leaf out of Delilah’s book, seducing the Assyrian general Holofernes before chopping his head off while he slept. Okay, so she had valid reasons to do so – the Assyrians threatened to destroy her home – but yet again love was used as cunning deceit.  (One strong woman, dear old Judith; decapitating someone requires a lot of muscle) One could of course argue that this had nothing to do with love. this was lust, plain and simple, the fire raging in Holofernes’ loins when in Judith’s presence befuddling his mind to the point that he lost his head. 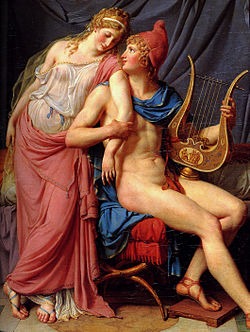 We fast forward a number of centuries and there we are, with Paris and Helen. The lady with the face that launched a thousand ships fell heads over heels for the Trojan prince and decided to run off with her lover thereby shaming her husband and handing the Greeks the pretext they needed to once and for all destroy Troy. Which they did with surprising efficiency, eradicating the city so completely its actual location was lost. (Until a polyglot German business man by the name of Heinrich Schliemann rediscovered it in the nineteenth century. Not a man much swayed by love, Heinrich took a pragmatic approach regarding such matters and advertised for a wife when he needed one. Different story …) Yet another lovestory that ended without a Happily Ever After. Paris died, Helen was dragged back home by hubby Menelaos, and Paris’ entire family was exterminated.
Around the times of Christ we have gorgeous Cleopatra, the lady who gave milk-baths a name, so to say. In keeping with tradition, Cleopatra was married to her younger brothers (in plural, as one died and the next one stepped into his place) But she loved elsewhere, starting with Julius Caesar. When they met, Cleopatra was young and nubile, Caesar was battle-hardened and… yup, old. But clearly vigorous enough to inspire tender feelings in his Egyptian mistress – or was that just Cleopatra pretending to keep herself and her country safe? Later on, after Caesar’s death, Cleopatra was to transfer her affections to Mark Anthony, and for a while it seemed these passionate lovers would succeed in building their own little empire. Enter capable, cool-headed Octavianus and “poof”, that little dream bubble was skewered. Mark Anthony committed suicide after suffering defeat at Octavianus’ hands, and some while later Cleopatra followed suit, as per tradition by being bitten by an asp.
Through the ages, loves and infatuations have often changed the course of history – or at least had severe impact on it. Edward II had a thing about his male favourites that undermined his standing and led to him being ousted (it may all have been platonic, we don’t know), Henry VIII’s infatuation with Anne Boleyn lead to a new English Church, Edward VII fell so in love with Wallis Simpson he abdicated (it’s a tad unclear if this is what Wallis wanted. Whatever the case, how can you say no to a man who has resigned a crown for your sake?). And then we have all those cases where women (okay, okay; a smattering of men as well) have risked everything – even their lives – for love.

One such person is Madeleine Rudenschiöld, a Swedish lady who in the late eighteenth century fell head over heels in over with the handsome royal favourite, Gustaf Mauritz Armfelt. An eyeful  was Gustaf – to our modern eyes somewhat lacking in toned muscle, but all the same pleasing to look at with an absolutely magnificent head of hair.  This decorated officer and cosmopolitan Don Juan was one of the king’s confidantes and was responsible for the lavish and complicated entertainments offered at court. Pretty Madeleine was young and innocent, and taken aback by being the object of Armfeldt’s intense courtship.
A determined man, Armfeldt won Madeleine’s heart in 1785 – coincidentally the same year he married another woman – and was soon a regular visitor to Madeleine’s bed. Being a man of voracious appetites when it came to women, Armfeldt had a number of other mistresses as well, but from his correspondence and the length of their relationship, Madeleine does seem to have held a special place in his heart – as did his capable if somewhat frumpty wife (whom he rather sweetly refers to as “my pumpkin”). So far, this is nothing but a little love affair, but when Gustav III was murdered in 1792, Armfeldt’s comfortable existence at court came to an end.
Armfeldt was ousted from power, did not like it and conspired to achieve the downfall of his enemies and his reinstatement at court. Dear Madeleine helped, delivering his messages to the other men involved in the conspiracy. One day she was intercepted, the conspiracy was revealed and while Armfeldt was safe down in Italy, poor Madeleine was not, having to suffer the ultimate shame of pillory and prison for having helped her lover. She was pardoned some years later and sort of drops out of history. She seems to have spent her latter years as an unpaid housekeeper for her brother. Oh, the wages of true love!
People do stupid things for love. Some drink poison to die beside their lover, some sell everything they own to help their loved one pursue a dream. It’s easy to laugh at these gullible fools – even if most of us will twist our lips in wry recognition as we hear a husky voice sing the poignant words in one of my favourite songs, Smoke Gets in Your Eyes
“They asked me how I knew, my true love was true,
I of course replied, something here inside cannot be denied.
They said someday you’ll find all who love are blind.
When your heart’s on fire, you must realise, smoke gets in your eyes.”
They say it is better to have loved and lost than to never have loved at all. I agree – heck, I think Cleopatra and Madeleine, Anne Boleyn and even Eve all agree as well. It is what we do in the name of love that defines us as humans, weak and fragile at times, but so resilient and brave at others. And no matter where we are in the world, to what culture we belong or what faith we call our own, there’s no denying that the greatest thrill of all is to hear someone say “I love you” . No, wait; the greatest thrill of all is to SAY “I love you” and see that special someone light up like a beacon.
Here’s to love, people. Here’s to the bubbly fizzy feeling that has you dancing on the spot, here’s to the mellow contentment of belonging together. To love – or as dear old Julius would have cooed to pretty Cleopatra, Amor Vincit Omnia. Except, of course, it doesn’t, as evidenced by Holofernes and Samson, Helena and Cleopatra. And yet…Oh,yes: and yet.