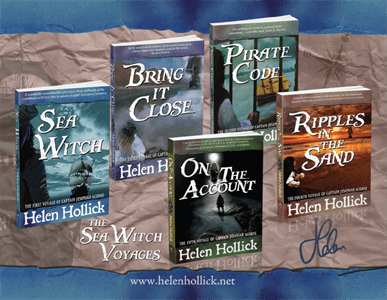 Today, I’ve invited Helen Hollick to join me here on Stolen Moments. Helen is the author of many, many books, among which her books about Emma of Normandy and Harold II of England deserve a special mention. As do her wonderful books about the dashing pirate Jesamiah Acorne and his adventures in the early 18th century. I must admit to being somewhat addicted to the Seawitch series – and Jesamiah. Now, in difference to real pirates, Jesamiah is a “good” pirate. So far, he hasn’t tortured, raped, terrorised or otherwise intimidated his fellow men. Thank heavens for that! 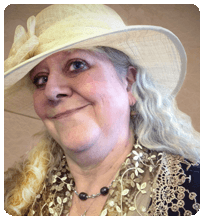 Obviously, to write books about an imaginary pirate requires that you do your research. It is therefore not exactly surprising that Helen knows A LOT about pirates. So much, in fact, that she has now written a non-fiction book, Pirates: Truth and Tales, about these maritime bandits – most of them anything but good!
So, I now turn you over to Helen and her post about some not-so-nice men.
******************************************
Were there any good pirates? They might be a tad difficult to find, unless you go back as far as Ancient Greece when a pirate was respected and admired as a warrior figure; the word pirate comes from the Greek verb, peiran: to attack.
There’s no denying that pirates were thieves, murderers and rapists – the terrorists of their time, although during the seventeenth and earlier eighteenth century they were tolerated, even encouraged, by various Kings, Queens and Governments of England because they plundered the ships of countries which were enemies. Spain mostly.

The handful of years between 1700-1722 was the Golden Age for these scurvy knaves of the sea. They might be dashing heroes in the eyes of Errol Flynn and Johnny Depp fans, but were darn nuisances to the Spanish and merchant traders. Funny how piracy, under the guise of legal privateering, was acceptable when it involved English ships with mostly English crews plundering Spanish treasure for the benefit of King and Country, but as soon as their deeds started hitting the pockets of merchants back home in England, the pirates had to go.
To be fair, trade between England and the American Colonies, pre 1700, was only on the cusp of exploding into Big Profit Territory – ergo uninteresting to those of piratical inclinations. Land such as Florida and the Carolinas had nothing to offer. Virginia beyond the Blue Ridge Mountains was unknown territory. The few plantations along the coast, Chesapeake Bay, easy-access rivers and on the islands of the Caribbean and Bahamas, yielded some profit, but not much.
To earn income from land, labour was needed. This was supplied by indentured servants – on the surface mostly (but not all) willing men and women who traded several years of their lives in return for the promise of land or payment; in reality, slaves, because the majority never received any reward except cruelty, poverty, and all too often, death.

Then, the wars with Spain, more or less, ended and for landowners and merchants, tobacco crops became a high source of income, along with sugar and cotton. Vessels carrying these products were just what a pirate wanted. These crops were highly lucrative but required cheap labour to tend them. Forget those poor indentured fools who succumbed to illness and heatstroke. They were replaced by black African slaves. And captured slave ships, for many a pirate, were wonderful because the cargo brought in a lot of money, and once the captured ship itself was cleaned and scrubbed – inside and out – it made a good pirate vessel, for slavers were usually designed for speed. The quicker the Atlantic crossing, the less likely the ‘livestock’ would die in transit.
The most famous ‘bad’ pirate, Blackbeard, had, for a short while, a splendid flagship which he renamed Queen Anne’s Revenge. He had ‘acquired’ her in November 1717 while she was being used as a French Slaver. We don’t know what happened to her cargo, but we do know the ship’s fate. Blackbeard ran her aground in 1718 off the coast of North Carolina, where her wreck was found many decades later in 1996.
Stede Bonnet was known as the ‘Gentleman Pirate’, so was he perhaps the ‘good one’? I personally am curious whether his name was Bonnet as in a lady’s hat, or Bonnay with a French-sounding twist to it? We will never know, except Bonnet (as in hat) doesn’t sound very piratical does it? Nor was he successful as a pirate. After messing things up several times, he was eventually captured and hanged. He had only turned to piracy to escape his nagging wife. Divorce, I feel, would have been an easier option.
Several notorious pirates fitted the category of ‘ugly’ – as in temperament rather than looks. (Although I would wager they were not especially handsome!)

Among the worst was Edward ‘Ned’ Lowe. Born in London in 1690, he was a known thief. His younger brother was hanged for burglary, and Lowe himself fled to the Caribbean in 1710, probably to avoid a similar fate. He met a girl, married, had a child, the wife dying in childbirth. He tried to hold down a legitimate job, but losing his temper he killed a man, commandeered a ship and turned to piracy. He seems to have respected marriage and women, though, for when capturing ships and forcing men to join his crew, he never insisted that married men should join him. A ‘good’ man after all? Ha! Read on.
Lowe captured more than one hundred vessels and became feared for his cruelty and liking for torture. His favoured method of discovering where valuable cargo was stashed, or punishing someone who crossed him, or who had a face he didn’t like, was to place a slow-match (a rope fuse) between the fingers of bound hands and set light to the rope, which would burn slowly, roasting the flesh to the bone. Another favourite was to suspend his victims by the ankles from a yardarm and drop them to the deck, repeating the process until they died.
As an early form of bungee-jumping, this particular style is not to be recommended.
Then Lowe captured a Portuguese ship, the Nostra Seigniora de Victoria. She was carrying 11,000 gold Portuguese moidores, worth at the time around £15,000 (you can add at least one more zero to that today,) but rather than the treasure falling into pirate hands the ship’s captain heaved it all into the sea. In fury Lowe cut off the man’s lips and boiled them in water, then forced the unfortunate victim to eat them. Lowe then murdered him along with the rest of the crew. He was also said to have burned a Frenchman alive. Definitely not a nice man.
In 1723 he sailed to the coast of Guinea where he met up with a previous partner. The partnership lasted two days, Lowe was abandoned by his friend and most of his crew – they’d had enough of his ugly nastiness. He sailed off due south and was never heard of again.
I doubt many shed tears over his loss!
******************************************
Ugh! That Lowe character seems like someone best avoided at all costs. Thank you, Helen, for sharing his story with us. Too bad he sort of sailed off and disappeared – although I’ve heard there is an alternative version of his fate, whereby he was captured by the French and hanged. Good riddance, I say. 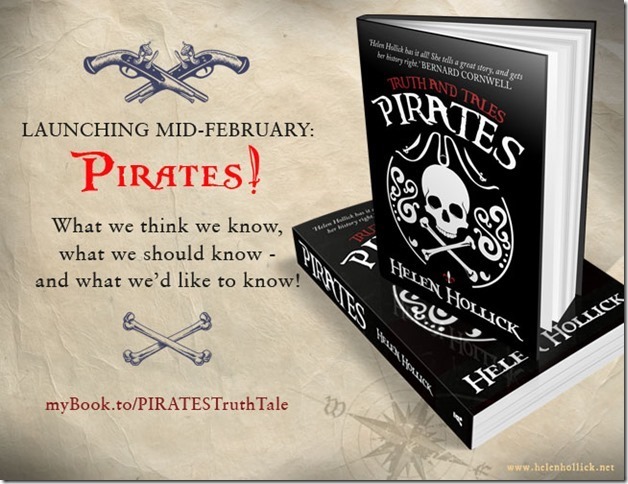 As to Pirates: Truth and Tales, it has already received some great reviews. Like this one:
In this informative and comprehensive book, the author takes the idea of pirates and piracy. Interspersed throughout is the author’s impressive knowledge of historical detail and it is obvious that a great deal of research has gone into bringing this piratical guide to life. Skilfully blending historical facts with literary fiction, sometimes, the book reads as lightly as a novel, at other times, we come sharply back to reality with daring tales of mischance and menace, of lives ruined by too much grog and too many loose women, and which ended, all too often, dangled at the end of a hangman’s rope. Throughout the book, the author’s real life buccaneers nestle comfortably alongside their more colourful literary counterparts. I especially enjoyed seeing the author’s own pirate creation, Jesamiah Acorne, from The Sea Witch Voyages, come to vibrant life in his own much deserved chapter. However you like your pirates, be they real or imaginary, there is no doubt that Pirates: Truth and Tales, is a great dip in and out of kind of book and whichever page the book falls open at, you are guaranteed to find a fascinating snippet into the life and times of these colourful, and it must be said, decidedly, dangerous characters. (Jaffa Reads Too)
Should you want to know more about Helen and her books, I recommend you stop by her website or her blog, or on twitter, or on FB. See? Helen’s all over the place!

8 thoughts on “The good, the bad and the ugly – a smorgasbord of pirates”