Had I lived back in the times of Genghis Khan, I would have been one of the Mongolian wives protesting loudly whenever the horde packed up and moved on.
“Leave my yurt alone,” I’d have told the fearless Mongolian warrior who was the father of my children. “Seriously, I want to put down roots, ok? You know, il faut cultiver son jardin and all that.”
I guess my nomadic husband would just have laughed. He lived for the roaming across the steppes – as did all the Mongolians. Except for me, had I been around. I like living in one place. I like sleeping in the same bed every night. Which is why it is ironic that, as of today, I have three beds I can call my own. In three different locations.
This my most recent bed addition is due to work. I start a new, exciting job tomorrow—I’ll be commuting on a weekly basis—and I’d go crazy if I didn’t have something more permanent than a hotel to spend my evenings/nights in. So despite not having one single nomadic bone in my body, here I am: three homes. Home with a capital H is the apartment in Malmö – the one with hubby in it. This is also the address the tax authorities consider my home, and we all know that if the tax authorities say something, it is useless to disagree.
Then there’s the country house – which also comes with a capital H, seeing as every rock, every piece of timber in that place calls out to my soul. And then there’s here, in the new place. As yet, this is home with a very lower case h. Especially after the last 24 hours of excitement involving an exploding microwave oven, beeping hubs and non-working dishwasher/washing machine. Also, it takes time for a place to become home – or maybe it’s a question of what it contains… 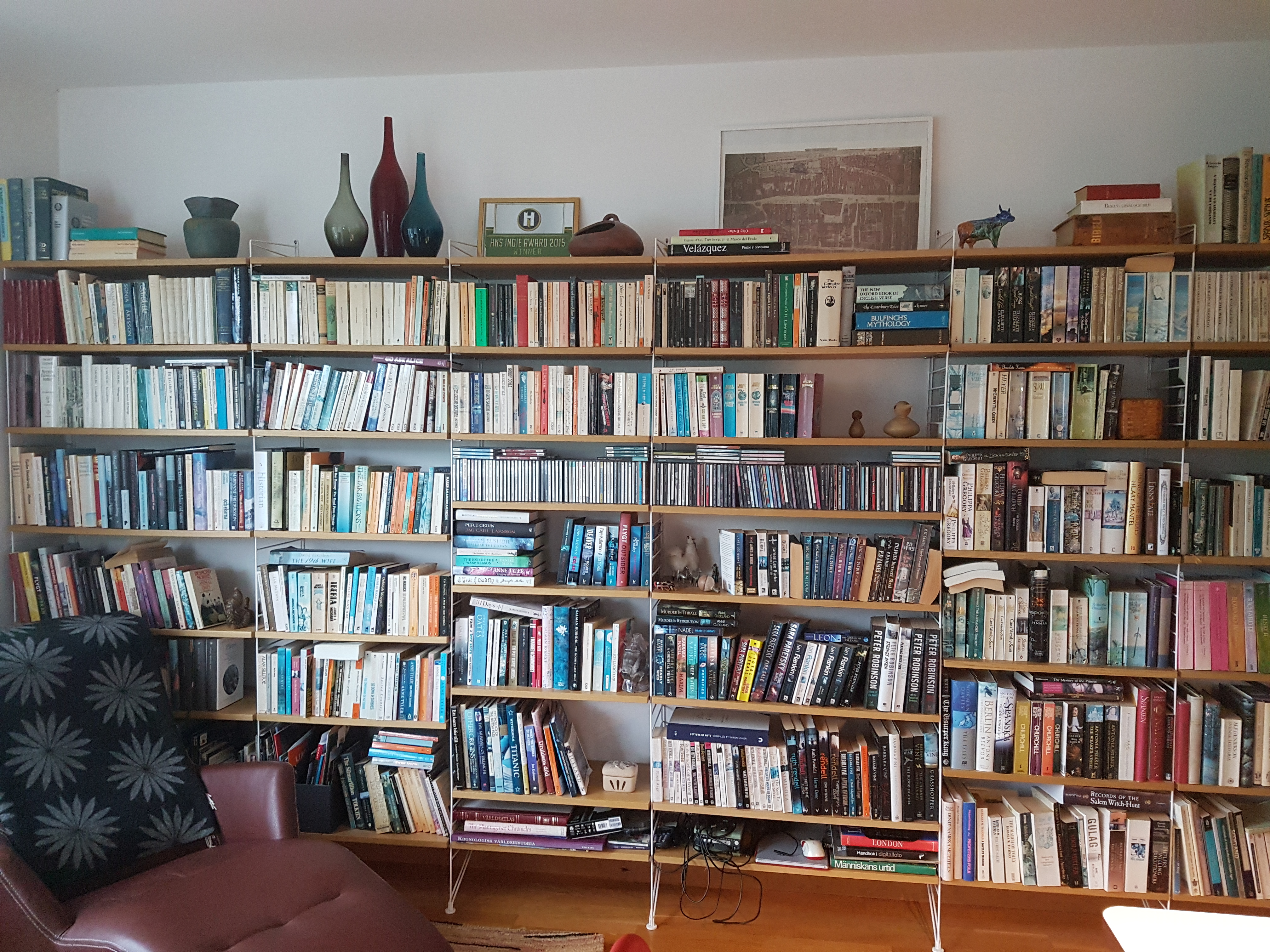 For me, marking a space as my home has always been related to unpacking my books. Once the book cases are up, once I’ve dusted and sorted my babies, Anna is finally in place. Yes, I want a pic or two of my kids, it’s important the two pictures my dad painted are there, but mostly it’s my literary treasures, from Kristin Lavransdotter, through Gösta Berling’s Saga, Strindberg’s collected short stories to Somerset Maugham, my Anthony Burgess books, all my historical fiction books all the way to Miguel Cervantes, Vargas Llosa and García Marquez.
These books are pretty well-travelled. They smell of old dust, of the occasional close encounter with damp. Now and then, I find a fragile sheet of paper stuck between the pages, and some of them are heavily annotated in the margins. Some are falling apart—more or less. My Tolkien books have so much scotch tape holding their spine together, I can no longer read the titles. The same goes for my Sharon K Penman books. Doesn’t matter: I recognise them anyway. In the dark. 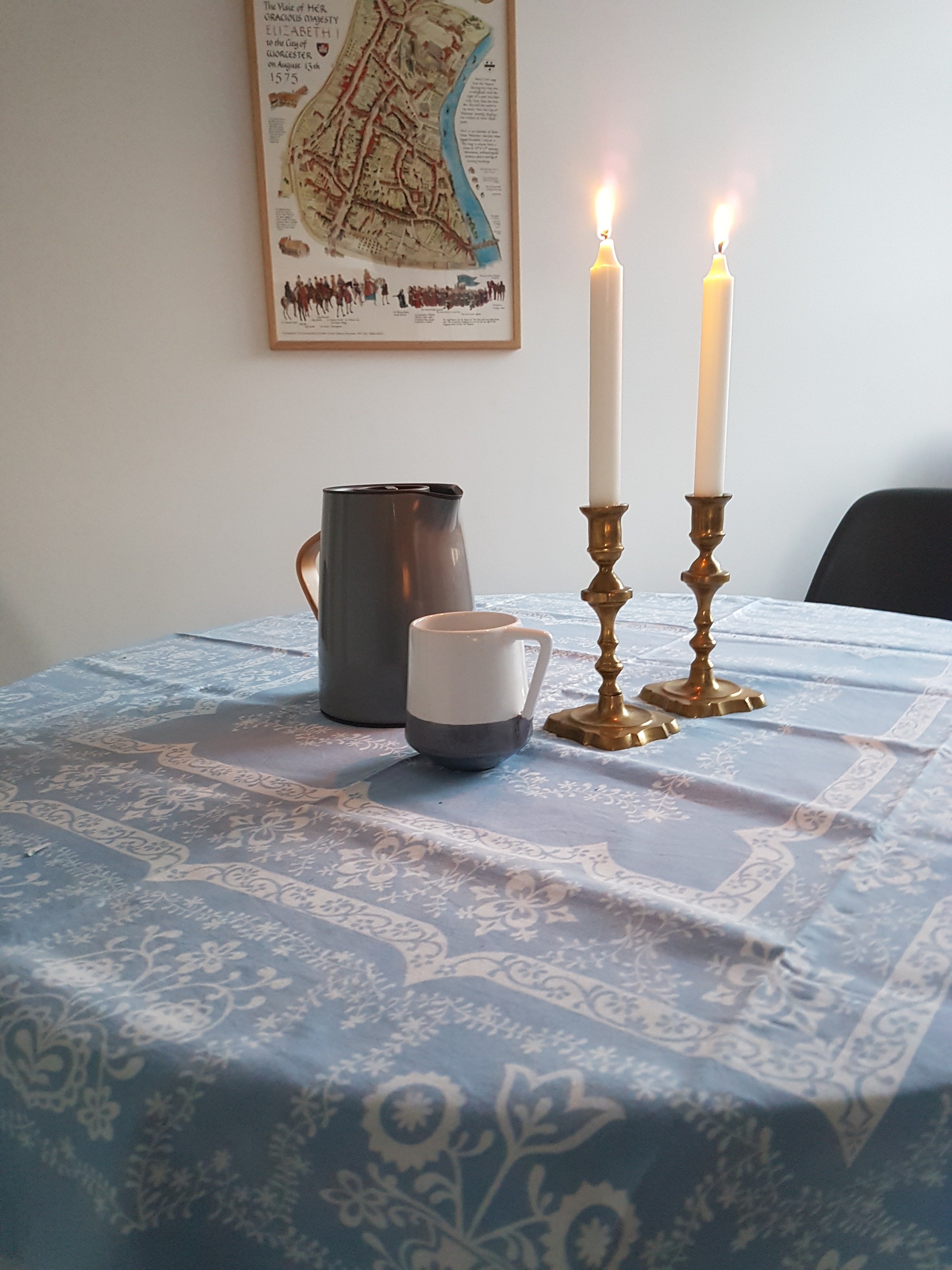 Obviously, I can’t take all my books from Home to home. That would make Home home, and I do want Home to remain being Home. So I compromised and took a couple of books with me. That helped a bit. They look a bit pathetic, standing to one side of my little bookshelf, but I comfort myself with the fact that there is room for more books. Then I went out and bought myself a new teapot-slash-thermos. That helped a bit more, as did the matching mugs. Then I bought some candlesticks, added candles, and the new place was at least a home. And I stand revealed as something of a materialist, don’t I? Things. Is that what makes a home?
I think most of us would say no. And yet all of us have homes full of things. Ah, some would say, but my things come with memories. Sure they do – some of them. My books, for example, are all tied to the memory of reading them – in some cases several times. But the lamp I bought at Ikea because it was quirky, my new teapot-slash-thermos (very pretty, crap as a teapot: form over function, peeps), the roasting pan I bought some weeks ago because the old one was simply old—they are rather a consequence of that materialistic gene, I fear. And I don’t want to be a materialist. It makes me feel shallow. Oh, God: a shallow materialist—what can possibly be worse than that? Oh, right: being a nomad.

Mind you, nomads can also be materialistic. Take, for example, that Mongolian yurt back in the 12th century, one of the many yurts following the Mongolian horde west across the steppe. This was glamping before glamping had been invented, as yurts were much more than a tent. It had walls and a door and a roof. It had carpets and pillows and furniture and, in some cases, even a floor. And as the Mongolians conquered, they amassed belongings, showing us that materialism was going strong already back then.
Come to think of it, materialism has always been going strong. Us humans have had an urge to collect things since our cave-living days. Initially, because one never knew just when that piece of flint or length of rawhide might come in useful. Over time, because he who had three flints was considered much better than he who only had one. Phew. I need not worry about being shallow—I am merely acting on instinct—which is why, of course, I just HAD to buy new satin sheets for my new apartment.
Despite the sheets and the candlesticks and the odd books, it will take time for my new home to become Home. You see, the truly fundamental part is missing: my man. And not a thing in the world can compensate for the fact that when I go to bed tonight, I’ll go to bed alone.

8 thoughts on “A shallow nomad”