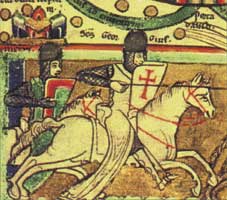 “In my head?” Adam de Guirande sounds amused. “You?”
“Honey, I hate to break it to you: I am in your head all the time. Or rather, if we’re going to be correct, you’re in my head all the time.”
Adam just looks at me. Sheesh! Some of these invented characters are sensitive souls, and Adam de Guirande most definitely doesn’t like to be reminded of the fact that he doesn’t exist – well, beyond his very tangible presence in my books about him. In those, if I may say so myself, Adam is a “walking, talking, living doll” – err – I mean knight. No doll. Absolutely not. A man’s man is Adam, which does not mean he walks about in absolute silence while internalising all his emotions. Few men do, no matter that Hollywood has tried to push the image of the silent, suffering hero for decades.
Anyway: writing a protagonist born in 1296 comes with its challenges – even more so when it’s a he and not a she. Mind you, I am of the firm opinion that the human condition as such has not changed all that much in the intervening seven centuries or so. Yes, human life and conceptual thinking took a HUGE leap when Homo Sapiens began decorating their caves with art, when they began spending their evenings sitting round the fire and telling each other stories.
Yes, it took another gigantic leap when the human race decided to eschew nomadic life and become farmers, rooted to the ground. At that moment, concepts such as private property saw the light of the day, as did the concept of patriarchial families. After all, Ancient Farmer who’d broken his back clearing ground to feed his family had a vested interest in ensuring it was his family & genes that would inherit the fruits of his labour.
I am not so sure landing on the moon was quite as climactic from the perspective of the human condition.
“Landing on the moon?” Adam cranes his head back to peer at the moon, which most obligingly appears in all its yellowish glory. “Truly?”
“Yup. And a cold and barren place it is,” I tell him. “No water, no air…”
“Man is intended for life here,” Adam says, sweeping his arm out to encompass the meadows with rippling grasses, the seas, the forests, the moors that offer endless skies and stunted gorse, the tilled fields, the burbling brooks (Okay, so we’re doing a 360 in my head), the walled cities that dot his world. He points upwards. “Those are God’s domains.” 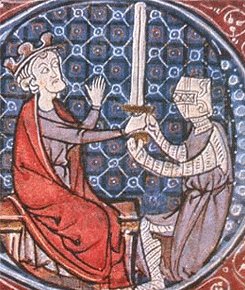 Ah. And here we have a fundamental difference between Adam’s take on the world and that of modern man. For Adam, God’s existence is never in doubt. He has grown up in a world where God is a constant presence, His will often referred to, His displeasure something best avoided, His grace something to strive for. There is no point in asking Adam (or his wife, Kit) if they believe in God. They wouldn’t comprehend the question. To them, God IS. Full stop.
I can, however, ask him if he believes in everything the Church teaches. Adam raises his brows. (Fair brows, as are his long lashes, fringing grey eyes) “Dangerous question,” he says.
“You’re among friends,” I assure him, and this medieval knight who knows much more about tweeting and blogging than a medieval knight should know – a consequence of all that time he spends hovering in my subconscious while I dedicate myself to such things – gives me a fleeting smile.
“The Churh has its share of ambitious and greedy men,” he says. “Not necessarily good – or godly – men. So no, I do not believe everything the Church teaches.” He squints at the sun (what can I say? night shifts into day rapidly in my head). “Ultimately, it is all very simple, isn’t it? A man must live out his life as well as he can, striving to uphold God’s laws and be good. You don’t need a priest to interpret that for you – you just need a conscience.”
Which he has – in spades. Sometimes, though, the conscience must come in conflict with his duty and loyalty to his lord. I ask as much, reminding him of the autumn 1321 when his then lord, Roger Mortimer rose in rebellion against the king. “Was that the right thing to do?”
“For me, there was no choice.” Adam sits back, extends his legs and spends a long time studying his hose, here and there expertly darned. “Lord Roger made me into the man I am. When he decided there was no choice but to rebel, I could do nothing but follow him.”
“To death and ruin, almost,” I remind him.
“Aye. Almost.” He sighs. “A knight without loyalty, without honour – he is no knight.”
“A bit like this?” I hand him a picture.

He studies it silence, a finger tracing the exquisite outlines of Albrecht Dürer’s engraving. “Nice horse,” he says after a while. His lips twitch. “And aye, at times it’s like this. A man doing his duty, despite Death’s rank breath tickling his neck, despite the Devil’s whispering.” He crosses himself. “A good knight perseveres and does his duty as best as he can.”
“And would you say all your contemporaries agree with that?”
“I would. Which is not the same thing as saying all knights are honourable and loyal. Many are as afflicted by ambition and greed as certain servants of the Church, and so…” He shrugs.
“And you? Aren’t you ambitious?”
“Not that ambitious.” He looks away. “Besides, I have already achieved my dreams. The abused gutter-rat is now a belted knight, owner of a few manors, and how else to repay the debt of gratitude I owe my master for rising me so high than by serving him diligently?”
“Which him?” I ask as gently as I can. Adam’s face clouds, his cleanshaven jaw clenching and unclenching. In difference to most of the men of his generation, he has never worn a beard. In this, he takes after Roger Mortimer – and it makes them stick out among the otherwise hirsute men who populate the court of the very young (and as yet beardless) Edward III.
“I have but one lord,” he replies. He nods in the direction of Edward, presently engaged in a mock-fight with his younger brother, Prince John.
“Not in here, you don’t,” I say, placing a hand on his chest.
Adam gives me a rueful smile. “No.” His gaze shifts, to where Roger Mortimer is presently walking side by side with Queen Isabella. For now, those two rule on behalf of Edward, but soon enough the pup will be a full-grown hound and then…I suppress the desire to whisper a prayer. Adam gives me a long look. “You know what will happen.”
“I do.” Duh. Apart from the fact that most of it is historical fact, I am also the person penning the novels in which Adam features. And what is to come will tear Adam apart. 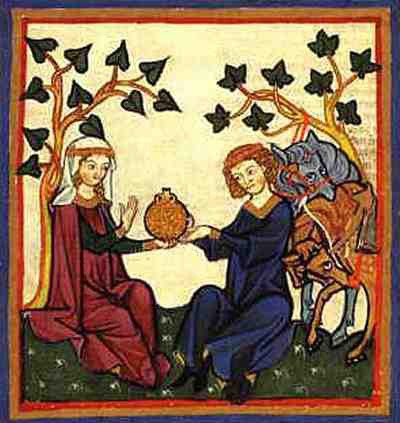 “So,” I say to change the subject, “God, loyalty and honour. What else is important to you?”
He grins. “Love – that’s what you want me to say, isn’t it?”
“Maybe. Is it?”
“Important? Aye, but it is not something I ever hoped for. I’d have settled for duty and some affection, a wife who was a friend, not a soulmate.” He slides me a look. “You modern people have such high expectations on your relationships, don’t you? Unless the earth moves, unless your heart double-thuds at the sight of your partner, it’s not worth it, and off you go searching for that elusive love elsewhere.” He takes my hands, callused fingers rubbing over my skin. “A marriage built on loyalty and trust may not set the bed on fire, but love comes in many shapes and forms.”
“Why are you holding her hand?” The dark female voice has Adam dropping my hand as if it were red-hot.
“We were talking about love,” I tell Kit, and she moves over to sit beside Adam – almost on Adam, as the bench he’s sitting on is narrow. “Adam was saying it was not something he’d expected to find.”
Kit nods. “Me neither. But then I wasn’t expecting to be coerced into marrying a stranger either.”
“Didn’t turn out too bad, did it?” I ask, watching their fingers braid together.
“Not too bad,” Kit agrees. She stands, reminds Adam the bath is being filled as we speak, and drifts through the hall towards the stairs leading to the solar. I can see Adam is itching to follow her, but instead he courteously enquires if I want some cider. I don’t. 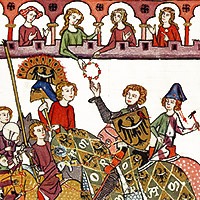 “Does it surprise you, that your wife is such a strong woman?” I ask. For an instant or two, he just stares at me, his cup frozen halfway to his mouth. And then he begins to laugh.
“Strong? All women are strong, ” he says once he has calmed down. “Only a fool of a man would ever underestimate a woman. I dare say that is as valid in your time as it is in mine.”
Too right. I smile at him and wave him off, watching as he hurries towards his waiting bath and wife. My very own medieval knight, burdened with too much loyalty and honour, fortunate in the love he shares with his wife and helpmeet. A man to hold your back when darkness threatens – and it does at times, both in his time and in ours. No wonder I love him to bits!
(And should you want to know more about Adam and his adventures, why not pop over here?)

2 thoughts on “In the head of a medieval knight”