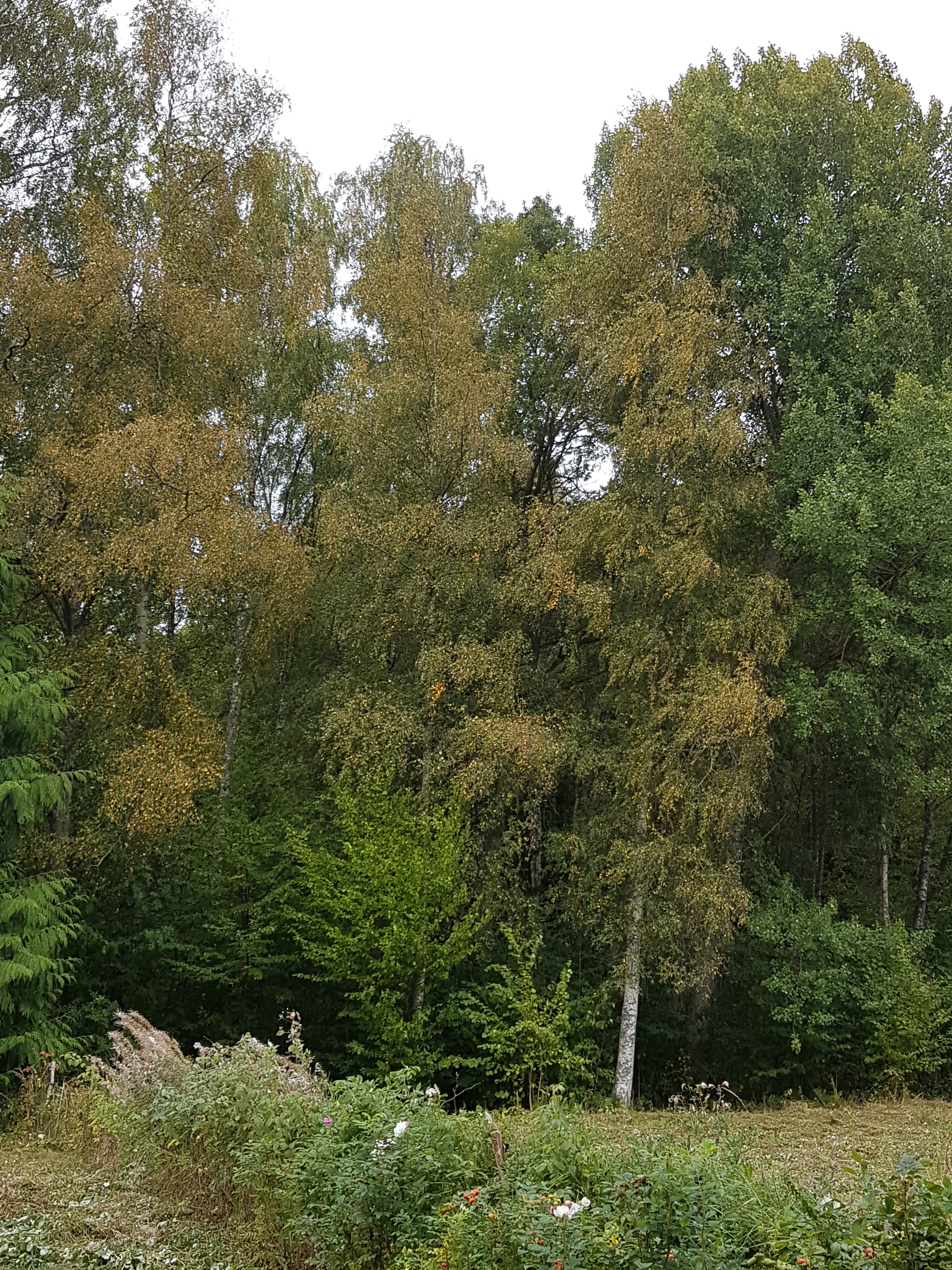 We took a walk through the woods some days ago. It was quiet. Most of the migrating birds have already left for warmer climes – albeit that it has been very warm up here the last few weeks. Anyway: other than the odd chirping sparrow and the high-pitched call of the kites that soared over the recently turned fields, it was mostly us and our footsteps through the drifts of ancient fallen leaves.
That’s the thing with forests: the ground is a carpet of russet colours most of the year, all those accumulated leaves slowly turning to mulch. In our forest, wild boars gouge trenches through the fallen leaves, revealing the rich dark soil beneath. In spring, anemones thrust their bright green stems and leaves through the rotting foliage, and here and there a stand of ferns adds a splash of dark green to the multiple hues of dun and russet and fading yellow. 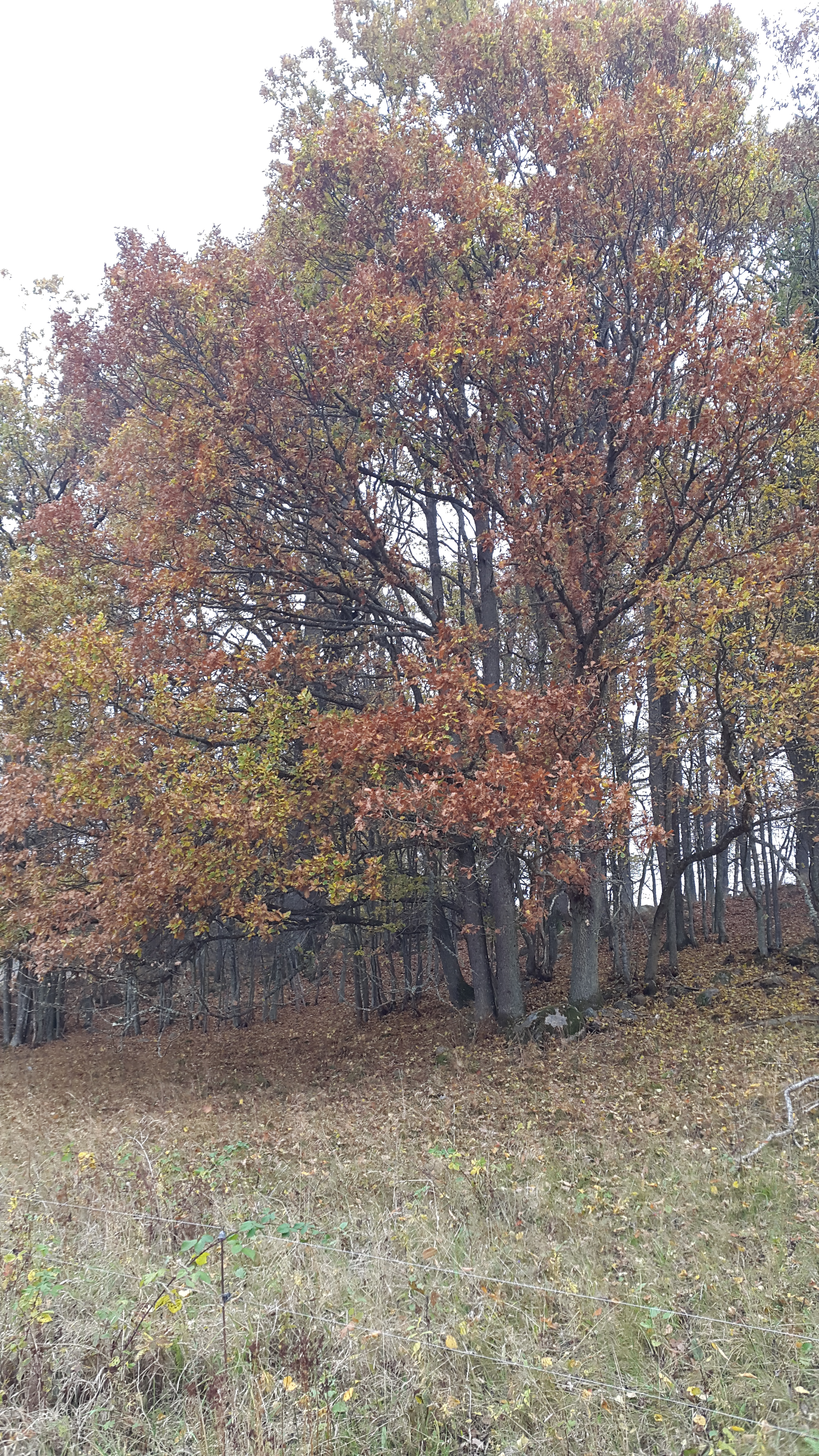 Our woods consist mostly of beeches. The beech has ancient roots in Scandinavia. During the nice, warm period that followed on the last ice age, the beech and the oak marched north, reaching well into northern Sweden before the winters became too harsh and too cold for them to survive. The climate cooled, and the beech retreated, clinging stubbornly to this the southernmost part of Sweden. These days, the climate is yet again changing, and spruce and pine wilt while the beech thrives. As do aspens and rowans, oaks and birches. Mind you, the birch thrives more or less everywhere – like a huge weed, almost.
This year, the rowans are laden with berries. As per Swedish oral tradition, plenty of rowan berries promise a winter with plenty of snow. If so, we’re looking at man-high drifts come December and January. Interestingly enough, in Finland they say that plenty of rowan berries means there will be very little snow. I guess the conclusion is that we cannot trust the rowan berries… 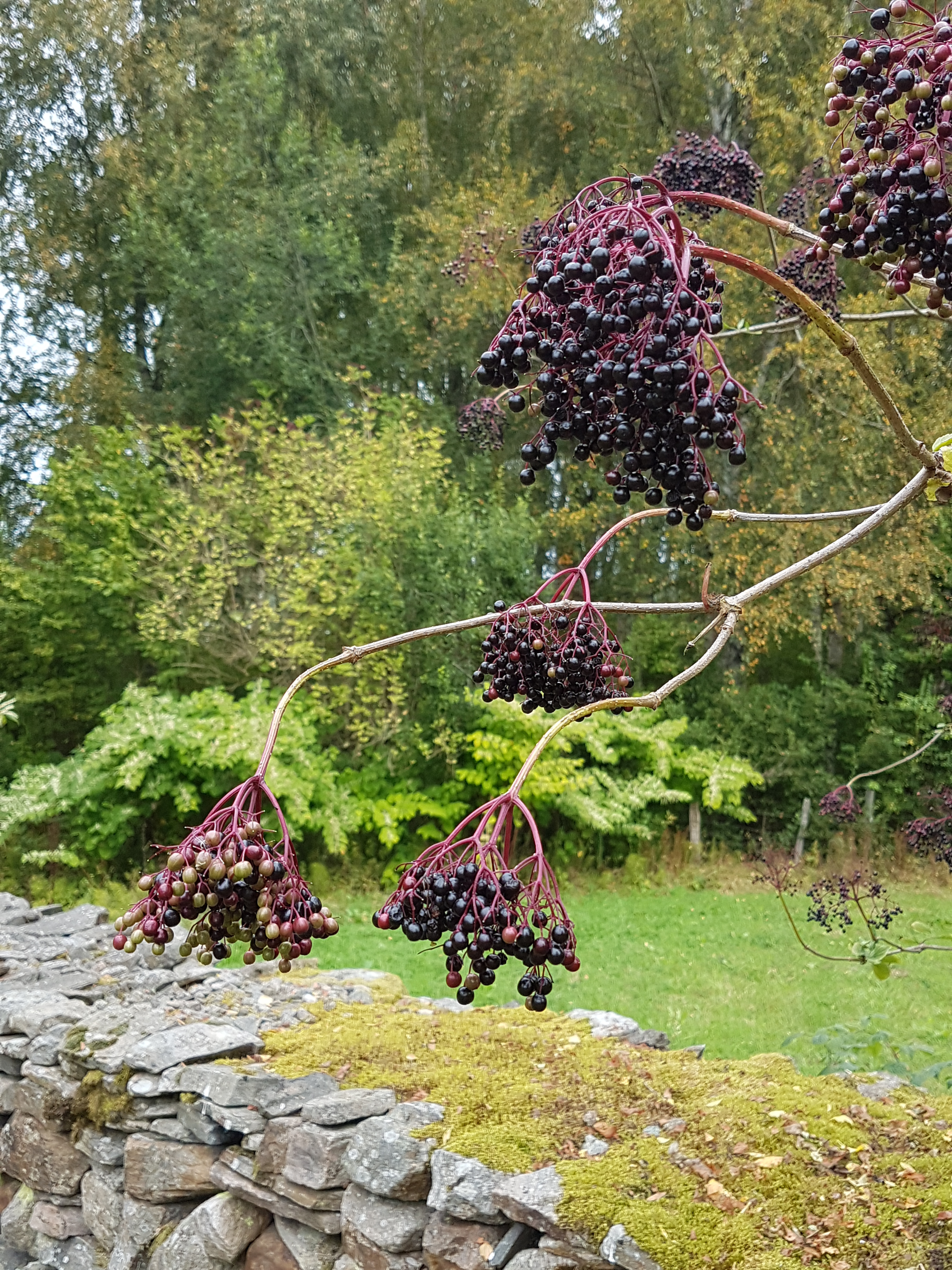 Rowan berries are horribly tart, but they make a passable jelly to serve with your venison. Elderberries are nowhere near as sour, but they make a better cordial than jelly – an excellent infusion to cure persistent colds during late autumn and winter. I love the contrast of the elder: snow white flowers followed by black, black berries that stain your fingers. 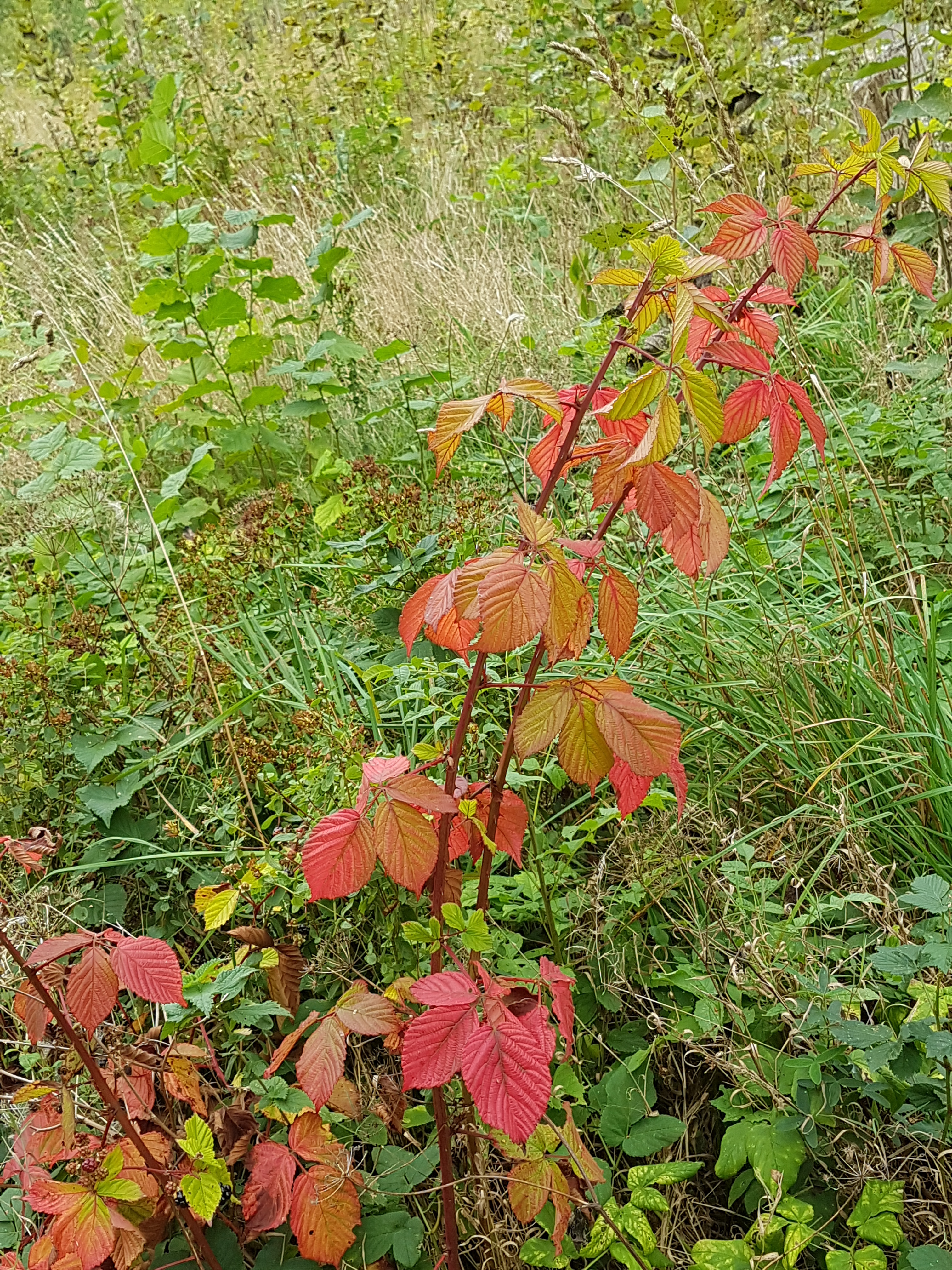 We wandered by a blackberry bramble – the birds had eaten all the berries, but the leaves presented themselves in the brightest of colours. Autumn is a sequence of fiery reds, one last gasp of bright colour before winter strips the world of everything but the most muted of greys and browns.
High above, the leaves of a birch rustled, its slender branches dipping in the wind. In summer, I love lying on my back and staring up at the sky through the whispering leaves of a birch. They sing me to sleep, and as they dip and twirl in the wind, they dapple the ground beneath, patches of sun darting like minnows through the grass. Now, in autumn, the leaves are already acquiring a yellow hue, and they no longer sing and burble, they sigh and crumble, drifting to litter the ground beneath with golden colours. Birches are one of those trees that are fundamental to the northern gardener: those of us with a passion for roses have learnt the hard way never to prune our roses before the birch presents its first miniscule leaves, dashes of bright, bright green shouting to the world that there will be no more killing frosts – not this spring. 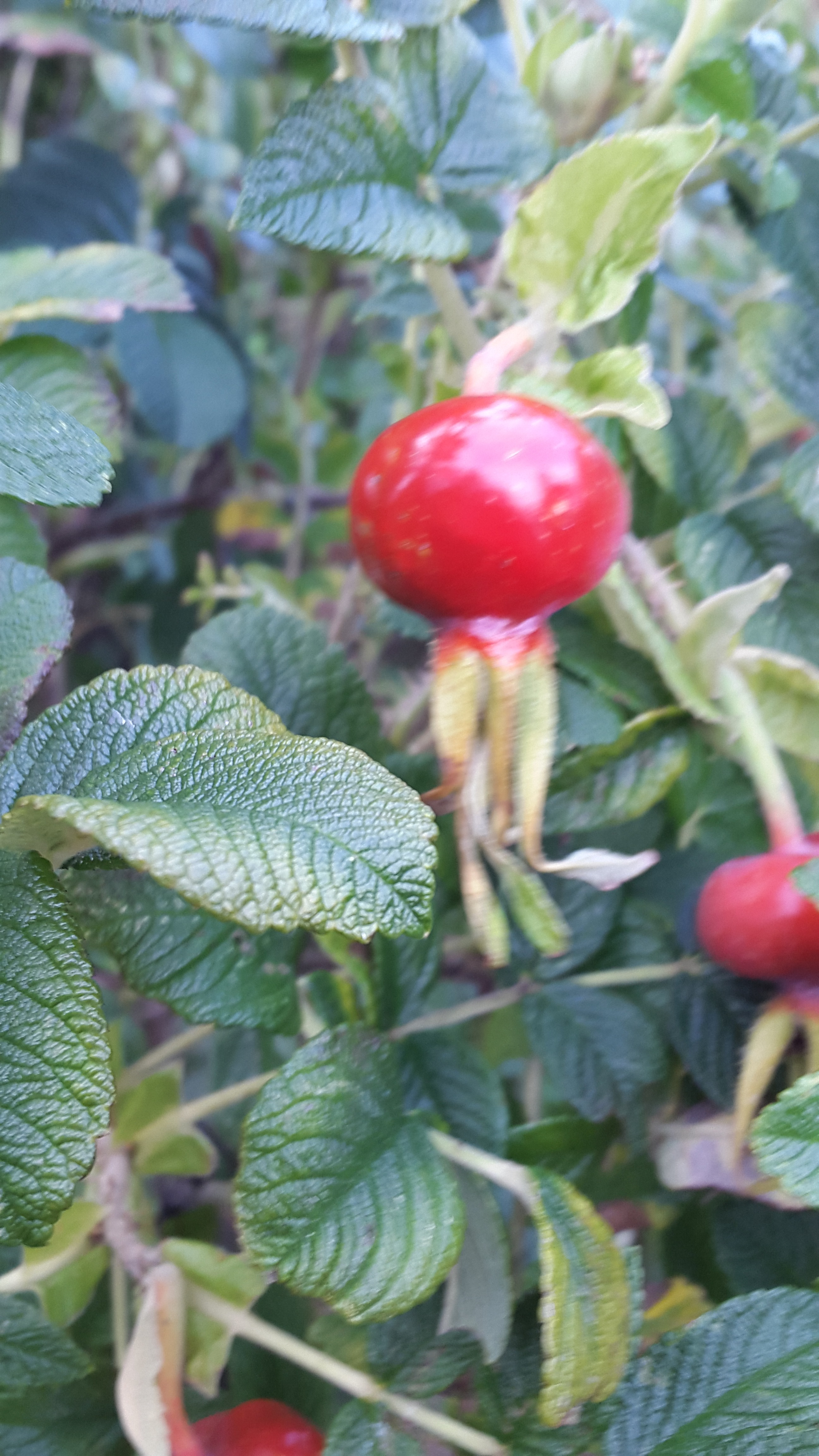 We reached the shores of the lake and stood for a while staring out over the expanse of water. Dark water, ruffled with frothing waves, and this time of the year we saw no loons, no geese, no ospreys. A gull wheeled by, a crow cawed from a nearby tree, and just by the water’s edge a tenacious dogrose had sunk roots into the stony shore, its dipping branches laden with bright red hips. Once upon a time, those hips were carefully collected and dried, an important source of c-vitamin (even if no one had ever heard of vitamins back then) during the winter. We picked a couple and nibbled carefully. The seeds within are hairy and can cause quite the itch should one swallow them – or rub them on someone’s skin.
We walked back through the silent beeches. Acorns in prickly shells dotted the ground – a precious commodity back when these woods were used to herd pigs in. Now they feed the wild boars, and consensus is the boars are a pest, not an asset, what with their propensity to invade gardens and chomp their way through flower beds and vegetable patches. We rarely see any boars – we just see their tracks and the patches of disturbed ground where they’ve dug for worms and whatever else boars find sufficiently delicious for them to thrust their sensitive snouts into the earth.
I find a conker and stuff it in my pocket. Autumn requires pockets to be full of conkers and ripe hazelnuts, and especially beautiful leaves. Putting them all in the same pocket results in disintegrated leaves, so generally I carry my leaves.
“More leaves?” hubby asks with a smile. “More conkers?”
“Can’t get enough of them,” I reply, but I throw the leaves I’m holding up into the air and watch them twirl down to the ground. Les feuilles mortes, I hum, kicking up another spray. Yesteryear’s leaves dance in the air around me, so brittle they’re almost translucent. In a month or so, they’ll be joined by this year’s harvest, sinking deeper and deeper into the ground. An endless circle of life, of buds that break into vivid green, adorning the trees for months before they finally fade and fall, slowly converting into soil in which new trees will take root, extending their branches to the sky. Les feuilles mortes? Can leaves die? Do they ever live? I have no idea – and nor, I bet, did Yves Montand, who sang of those fallen leaves that reminded him of memories and regrets.
Les feuilles mortes se ramassent à la pelle,
Les souvenirs et les regrets aussi
Et le vent du nord les emporte
Dans la nuit froide de l’oubli. 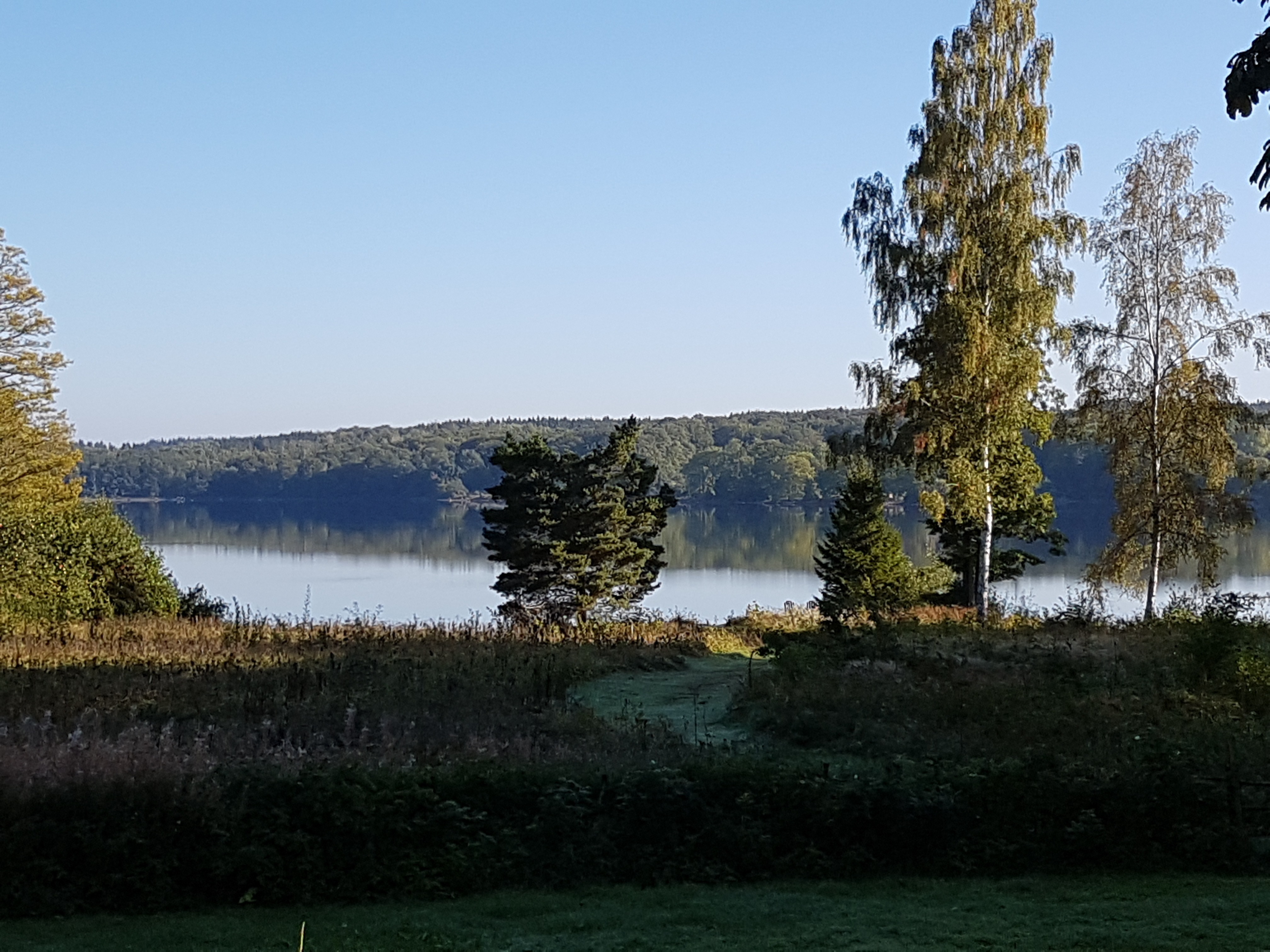 Soon enough, the north wind will sweep through our woods, and the trees will be stripped of their leaves to stand naked and shivering in the winter gale. But not yet, not today, or tomorrow. For some weeks more, the golden glow of autumn will remain.

5 thoughts on “Les feuilles mortes – a reflection over impending autumn”