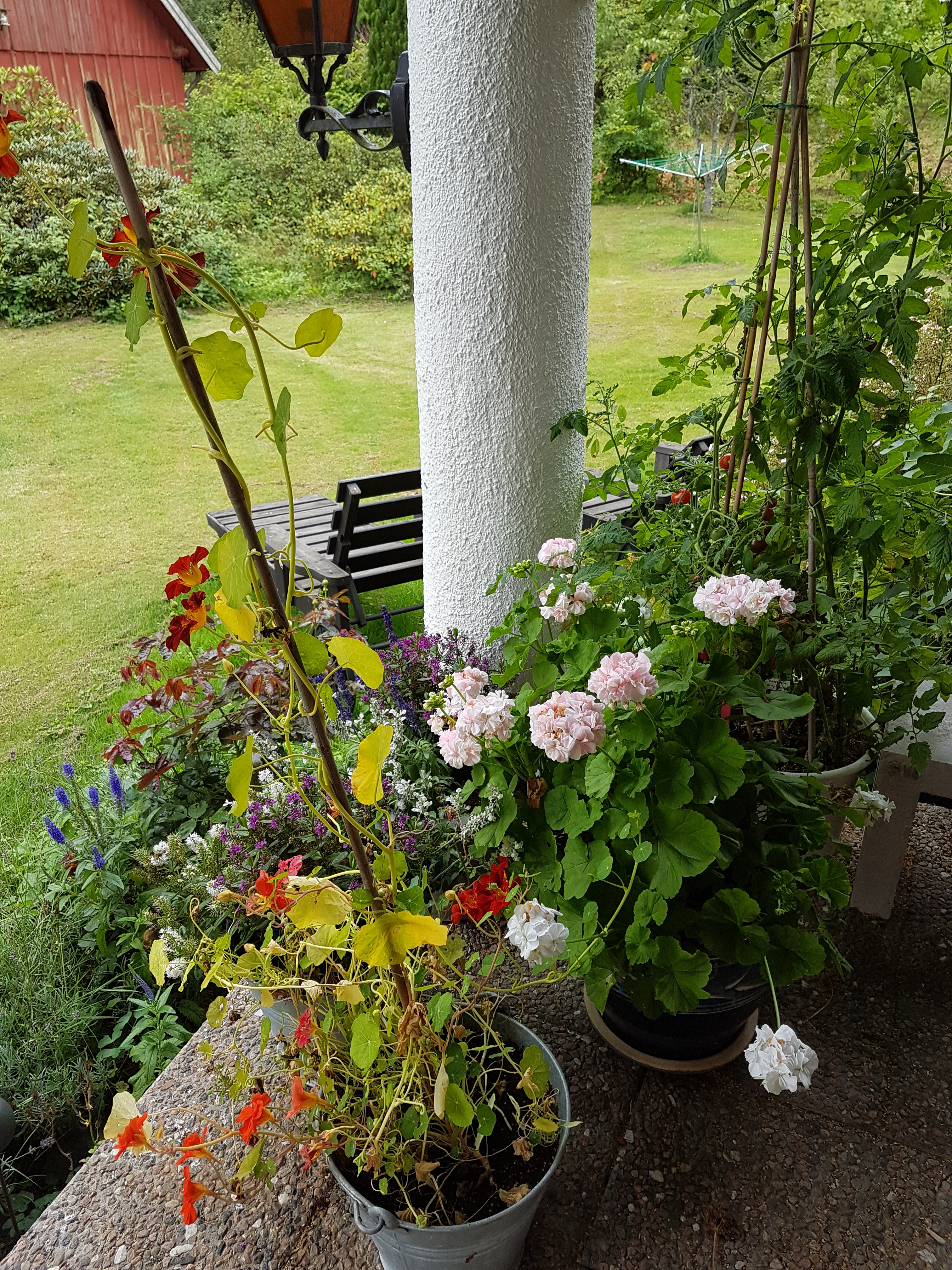 Home. A word we all have some sort of relationship with. Home conjures up a place of safety, a sensation of belonging, of having roots. For those obliged to flee their home, the word is intimately connected with grief, with fear for the future, with not belonging. For those who’ve never had a home, it expresses a dream, a hope of one day having a place to call one’s own.
I grew up all over the place, my parents being of the generation that had grown up with home but little adventure. They knew where they came from, drew strength from their roots, safely planted at home, and set out to explore the world. For me and my sister, this resulted in us not having a place to call home. Don’t get me wrong, we most definitely had a home but it wasn’t Home with a capital H.
We returned to Sweden when I was a teenager. My mother was ecstatic – she was coming Home. Me, not so much. Sweden is VERY different from South America, and I stuck out like a sore thumb. Definitely not home for me – but neither was there anywhere else I could label that way.
“So where are you from?” my new classmates would ask.
“A bit all over the place,” I’d reply, and they looked at me as I was crazy.
“What? You don’t know where you’re FROM? Seriously?”
Well, no, I didn’t. As per my passport I was Swedish, as per where I’d spent my first years I was Peruvian or Colombian or Venezuelan, as per how I’d been schooled I was English or American. A nice, multinational cocktail that left me without any distinctive cultural traits.
While I was struggling with defining who – or rather what – I was from a nationality perspective, my mother had crashed at full speed into the realisation that Home had changed. The country she’d left behind had changed fundamentally during the years she’d been gone, and she wasn’t entirely sure it was for the better. My mother had painted a picture of paradise for us: Sweden as she presented it was defined by her nostalgia, not by what it truly was, and the reality of a grey and freezing November in Malmö had little to do with the images she’d given us of rosy-cheeked children playing in the snow.
I grew up. I met a young man, and I loved him for a variety of reasons (starting with his intriguing family history and the fact that he had a coat of arms with beaver heads on them) but very much because he knew exactly where he came from and who he was. When he said “home”, it was one specific place, populated by a fixed cast of people. He had friends he’d known all his life, he could tour the graveyards round his hometown and pick out his ancestors, and I yearned for that stability, that sense of belonging.
We married, we had children, and I built a home – for them, more than for me. I pride myself on the fact that all of our four kids have the same robust sense of home as their father does, and I guess some of it is due to the smell of baking cinnamon buns, to the routines and rituals hubby and I put in place. Plus it helps that we never moved between countries…
I still had problems with the word “home”. Truth be told, I was still looking for Home, hoping that one day I would see a house, a drive, a picket fence, a rose garden – something that would call out to me and tell me this was it, this was my place.
And then, some years ago, I did. Our daughter was down in Malmö over the summer, and halfway through June she announced we needed a country home, a place for the family to assemble.
“Umm,” I said, “what’s wrong with our house?”
“You’ll not keep it once we’ve all moved out – it’s way too big.”
True. But not something that was about to happen anytime soon.
Daughter was adamant, and one day she showed us a set of pictures. “It’s for sale,” she said. “Just look at it!” Her eyes were bright with excitement. The house lay flanked by two huge barns and surrounded by woods.
“Hmm,” I said, but agreed we could at least go and see it.
I was grumpy all the way up. It was too far, it was too hot, I needed to pee, and who in their right mind wanted to live here, surrounded by miles and miles of dark forest. Except the forest wasn’t dark, it was a vibrant rustling green, beeches with silvered trunks raising their branches to the sky. But still: very many trees… 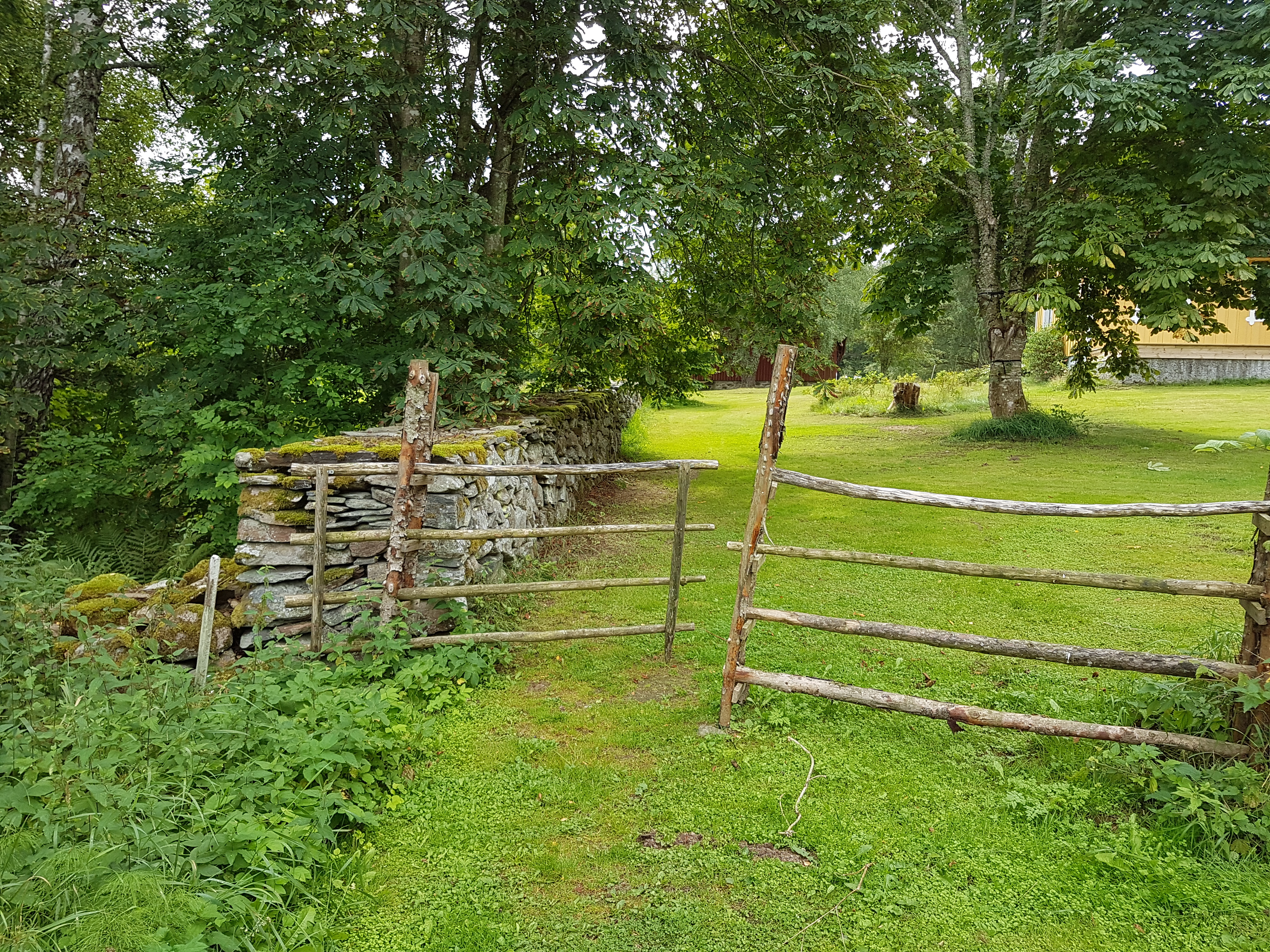 We bumped down a lane, and hubby turned off the ignition. It was quiet. I got out, and a swallow swooped by. To my right, an expanse of rustling grass fell away towards the lake, rippling like waves in the wind. To my left, a huge dog rose spilled flowers over the ancient stone wall. I took a step. I took two. I looked at hubby. He looked at me. He smiled. I did too, as all of me filled with the fizzy certainty that this was it. This was Home. It called to me, the stone walls whispered my name, the ancient foundations of the barn seemed to lean towards me. Wild, overgrown roses begged for some TLC, the chestnut tree soughed and sang, and in that moment I knew I had to have it. Now.
Since then, a couple of years have gone by. I’ve tamed some of the roses – but not all – I’ve added peonies and buddleias, columbines and lavender. We’ve rebuilt the old deck, painted the house, added wood-chimes and a flagpole. I’ve discovered the old hops plant – as per an inventory conducted in 1840, a hops plant grew in the exact same spot back then as well – and I often wonder if it is the same plant. I’ve discovered the lilies-of-the-valley that grow in a shaded slope, I’ve filled my arms with bright blue lupines.
The house creaks and shifts around me, and it is a warm and welcoming place. Our adult children love it as much as we do, and my daughter has been proved right: we needed a place like this – all of us. 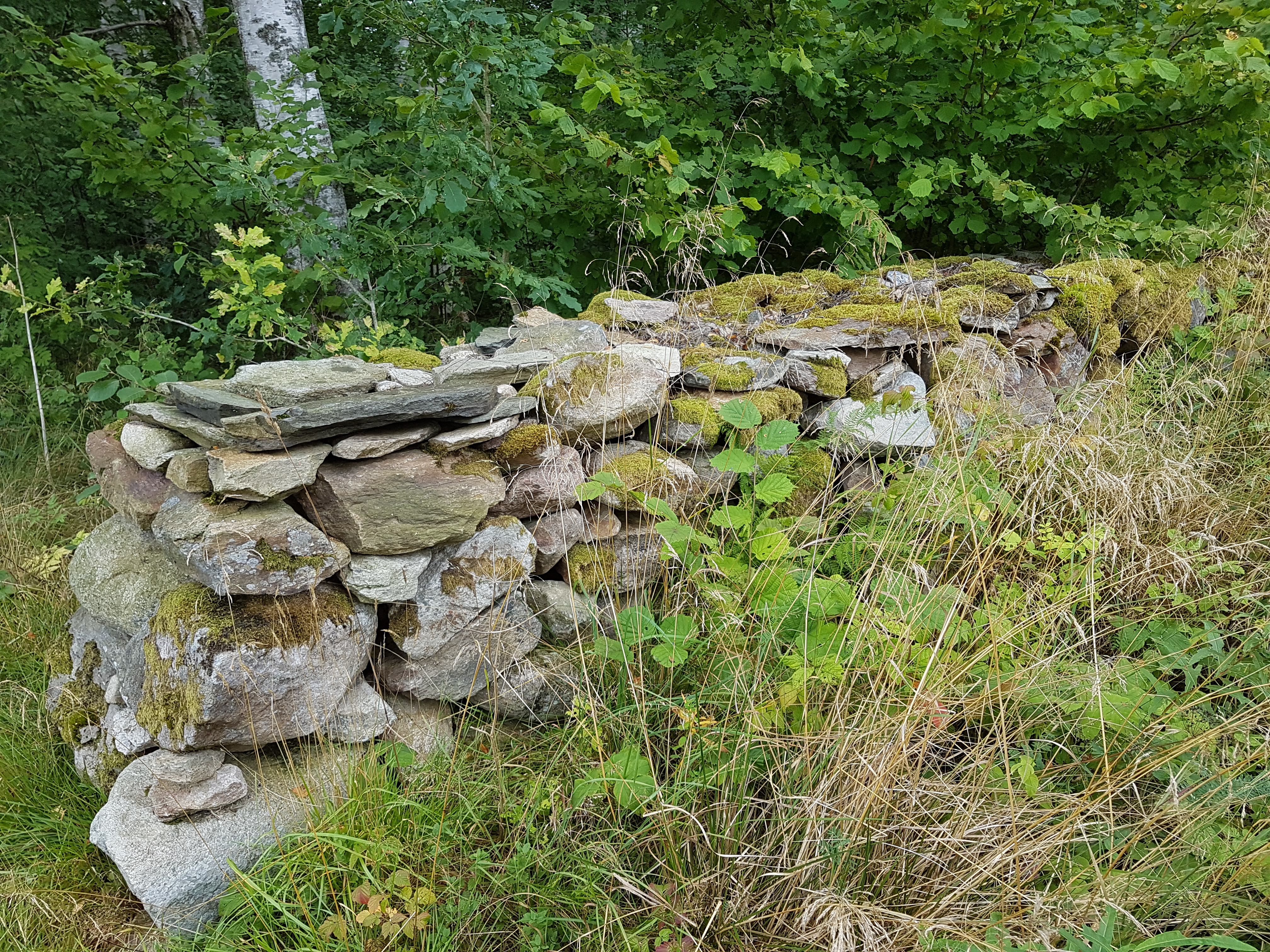 But what is a home full of joy for us has not necessarily always been that. This self-same place, these buildings that I love, once housed other people, and at times I see their shadows, hear faint echoes of their voices. The two boys look tired and pale, their hands dirty after yet another day clearing the field of stone. Those stone walls that I adore are the result of back-breaking work, a must to ensure the field could be tilled and planted.
A girl calls out to the cows, and she is as dirty as her brothers, young shoulders bowed under the yoke of full milk buckets she is carrying. A harsh land for a farmer, with meagre soil and far too much forest that was constantly attempting to reclaim what the farmer had wrested from it. I see him too, in his homemade heavy wooden clogs, his un-collared shirt, grey with age. Rye-coloured hair, blue eyes surrounded by the wrinkles of a permanent frown. He is around thirty or so, already worn out after days battling trees and stones, and there are far too many nights when he lies awake, wondering just how he is to keep his little family alive. Should he do like the neighbours have done? Should he pack up and leave? But this is home, has been home to his ancestors for generations. Home as a fetter, a mill-stone round his neck.
I see this unknown farmer sitting side by side with his wife. A moment of drowsy peace, the air scented with honeysuckle and dog-roses, and she leans her head against his shoulder and whispers that she is with child. Again. He takes her hand and squeezes it, because every time she swells with child he fears she may die. And yet neither of them can do without those moments when he lies beside her, on top of her, inside her – little sparks of happiness in an existence so defined by drudgery.
“It will be fine,” she whispers, and he nods and counts their brood – five in all, from the eldest Kajsa to the little one still in smocks. And now one more mouth to feed, and no matter how hard he and his sons work, they’ll never clear another field before spring. So he inhales, and all of him fills with the scents of his home. Home. His hand smooths over the worn wood of the bench they’re sitting on. Home.
“We must leave,” he tells her. Before this home of his breaks him, takes more children from them.
And so they do. A final image of a man in his Sunday best, standing beside the cart on which he has loaded his family and their precious chests. The farm – his home – has been sold, and for the last time ever he turns the heavy key in the lock. It breaks his heart. It also breaks the weight that has been suffocating him for so long. But wherever he goes, wherever he ends up, he will now and then whisper “Home”, and it will be this place, these raspberry brambles, these stone walls, that he will see. 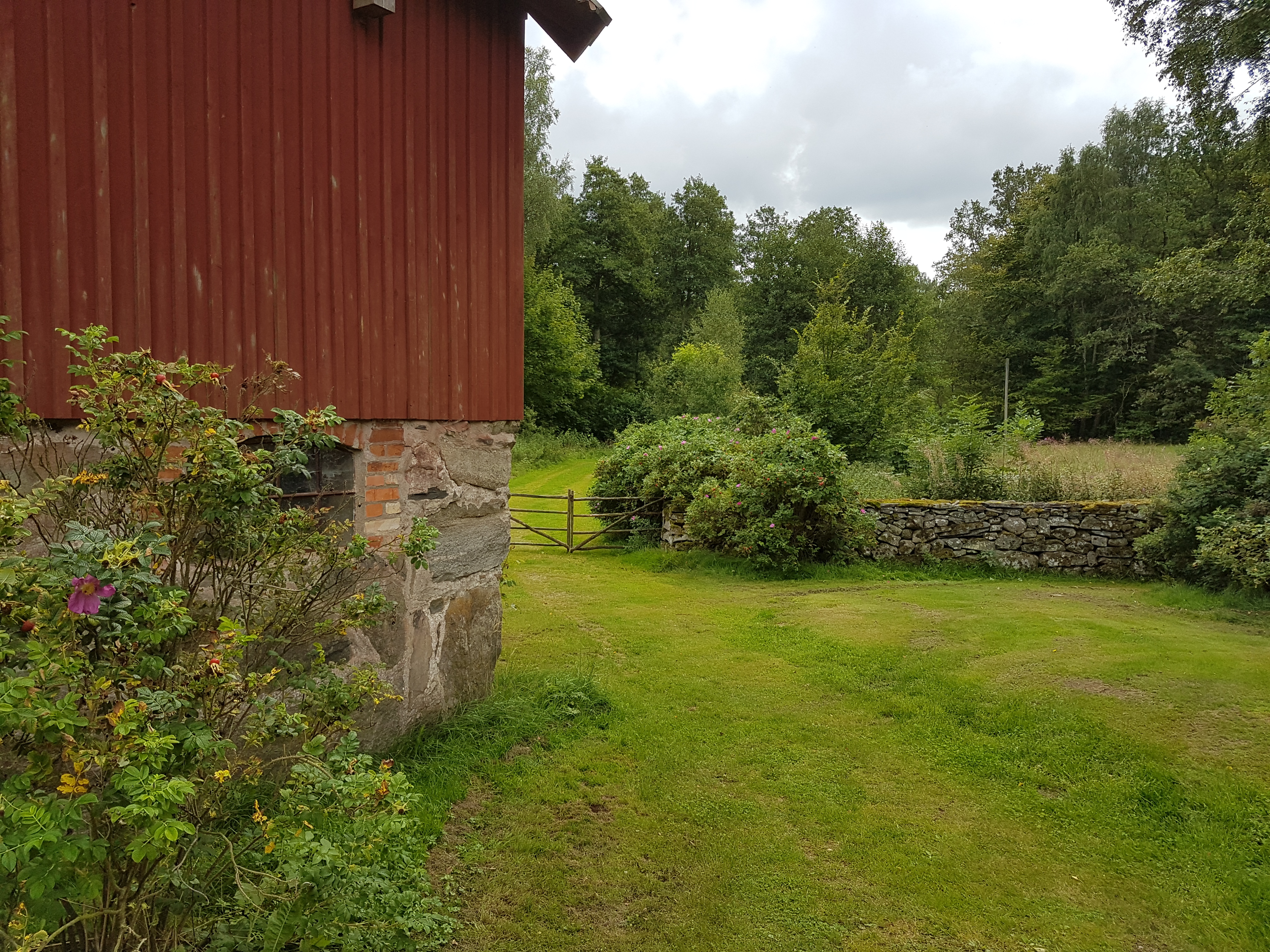 Over time, that long gone farmer hopefully learnt the same lesson I did, namely that what ultimately makes a home is not necessarily the place, but the people. This beloved country house of ours would not be Home had it not been for our children filling the place with their voices and laughter. No matter how many cardamom buns I bake, a home without the people you love is never a home, it’s merely a house. But even if I know this, I can’t help but rest my cheek against the sunwarmed wood of the red barns, so happy to be here, to be Home. At last.

8 thoughts on “Home is where the heart is”